Academy'Galleries in Venice: an excellent collection on Venetian painting The Galleries of the Academy of Venice are a complex of buildings that house some very important collections of Venetian and Venetian paintings, both sculptures and graphic and pictorial works.

The works on display in the permanent collection are considered of great importance for the history of Italian and Western art. Some of the artists on display are great representatives of the historical vein of so-called venetian painting: Tintoretto, Titian, Canaletto, Giorgione, Giovanni Bellini, Jacopo Bellini, Vittore Carpaccio, Cima da Conegliano, Rosalba Carriera and Paolo Veronese.

Visiting this museum means to deepen and admire one of the most illustrious artistic epochs linked to Italy. A jubilation of art and culture to celebrate and know. 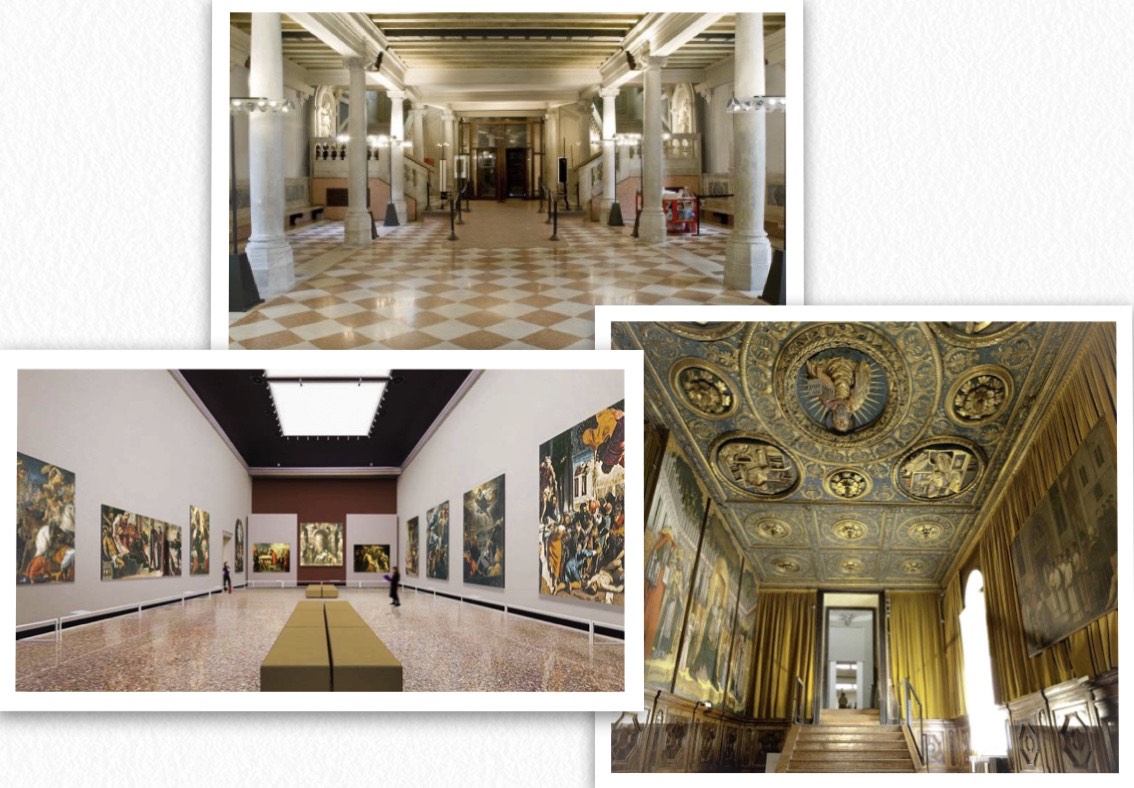 As for other cases of this kind in Italy, the main purpose of making a picture gallery coincide in an academic complex dedicated to the arts is purely didactic. In this way they begin to collect works by local and foreign artists in order to initiate and inspire young people to artistic professions.

It was thus that the ancient institution of the Academy of Fine Arts was founded in 1750 in the so-called Fondaco della Farina, a few steps from St. Mark Square, today the Harbourmaster's office, where lessons in painting, sculpture and architecture were held regularly. On September 24, 1750 the Venetian Senate sanctioned the birth of the Venetian Academy which endowed itself with a statute in 1756.

With the arrival of Napoleon and the fall of the Serenissima Republic of Venice (1797) there was first a terrible pillage of works, which passed mainly to the museums of the Louvre in Paris or Brera, and then a general re-regulation of the organizational structure which, with a decree of 1807, was placed in the present location of the convent and school of Santa Maria della Carità.

With the double value of a school and a museum institute, it was soon decided to abandon the idea of a "universal museum" in favour of the history of local painting. It is also thanks to this choice that today the Academy's Galleries present one of the most important collections of Venetian and Venetian art in the world.

It was only in 2004 that it was decided to divide the institute of higher education and artistic research from the museum.

Academy's Galleries: main works and collections of the museum Today the Museum is composed of 37 exhibition rooms that house some of the greatest masterpieces of Western culture, from the famous Tempest by Giorgione to the pietà by Giovanni Bellini and Titian, from Canova's sculptures to Leonardo da Vinci's Vitruvian Man.

An extraordinary collection that has seen over time important acquisitions such as Andrea Mantegna's San Giorgio or foreign artists such as Hans Memling and Hieronymus Bosch.

Literally not to be missed is the Convito in casa Levi by the artist Paolo Caliari known as Veronese; a large canvas over thirteen metres long painted initially for the refectory of the Basil of Ss. Giovanni and Paolo in 1573. The scene was supposed to represent a "Last Supper" (a theme that decorated several refectories, think of Leonardo da Vinci's Last Supper) but was condemned by the Inquisition and the artist had to answer for it personally. The title was changed to "Convito in casa Levi" in order not to renounce the freedom of pictorial expression and the representation of the characters in festive poses.

Of great historical-artistic importance, Giorgione's Tempest probably painted at the beginning of the sixteenth century. Mysterious and emblematic is the scene in which, in a natural landscape, a naked woman is shown nursing a baby and a guard with reddish colours. A lightning bolt rips through the sky, an incredible power rendered through simple veils of colour, simply extraordinary.

Still representing the great painting of the sixteenth century Veneto a master like Jacopo Robusti called Tintoretto who is richly celebrated and represented in the rooms of the museum. His masterpiece in the gallery is the Miracle of St. Mark in this scene thanks to his intervention manages to save from an unjust martyrdom a slave lying on the ground. In the large canvas enhanced by the exceptional perspective rendering we can see the Saint breaking the instruments of martyrdom with a gesture. A masterpiece of Italian painting!

Although Venice is the leading city of "color" and "colorism", the Academy's Galleries hold a precious collection of drawings, prints and preparatory cartoons by great artists of the past. Fragile and extraordinary drawings that the museum preserves paying particular attention to light and microclimatic values. A collection that includes several works and sketches by Leonardo da Vinci, Raffaello Sanzio, Canaletto, Hayez and a very important "pencil on paper" by Michelangelo Buonarroti that represents the episode linked to the Greek mythology of the Fall of Phaeton.

Also conserved in this section is Leonardo Da Vinci's iconic masterpiece, The Vitruvian Man, in which the Florentine master represents the ideal proportions of the human body, inscribing in both a circle and a square a man with open arms. The small "pen and ink on paper" is dated around 1490, and has been kept in the Galleries since 1822 when it was purchased by the painter, poet and art collector Giuseppe Bossi.

I cannot reveal all the wonders kept in the Academy’s Galleries, because the mere list would deprive the collection of charm. But I hope I have teased and enticed you to visit.The sixteenth century is one of those centuries in which it is easy to draw a parallel with our times, visiting a museum like the Galleries of the Academy helps us to better understand our reality, in a serene and "aesthetic" way as only Art is able to do.

The Academy's Galleries is located in Campo della Carità, Dorsoduro 1050.