April 25th is a day of fundamental importance for the history of the Italian Republic, as it celebrates the anniversary of the liberation of the country from the fascist powers of the Second World War. A day on which we celebrate not only freedom from political subjugation, but also, and perhaps above all, the triumph of the dignity of a people united in a single cry, from north to south, in a common struggle. It is the day on which the President of the Republic pays his homage, as representative of the entire people, to the Unknown Soldier, by laying a laurel wreath at the foot of the Altar of the Fatherland in Rome.

In Venice, however, April 25th is also the day of the celebration of its Patron Saint Mark, a symbol of strength and pride and memory of a glorious and peaceful past.

It's easy to associate the city of Venice with the figure of the winged lion that embodies the young Saint, but few know the history and traditions that hide behind this millenary union, between historical reality and fascinating legends.

Saint Mark: why is He the patron saint of Venice? 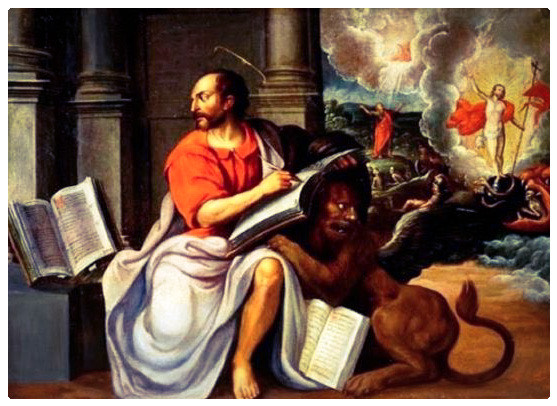 The close bond between Venice and St. Mark's really begins at a very early stage, perfectly placed between reality and legendary narration.

Born in Israel in the second half of the first century A.D. to that mother Mary in whose house it seems that the Last Supper of Christ and his Apostles took place, Mark spent his life dedicating himself to the faith and good of souls and of his neighbor. He was a disciple of Saints Peter and Paul, and died a martyr in Alexandria, where he had gone to spread the word of Christ: he was tied to a rope and pulled by horses along a stony path. It was April 25th in the year 68.

The legendary story of his life tells that Mark was shipwrecked in the Venetian Lagoon before going to Egypt, following a terrible and violent storm. In the rural area where the Church of San Francesco della Vigna currently stands, an angel in the shape of a winged lion appeared to him in a dream, pronouncing the prophetic words "Pax tibi Marce, evangelista meus. Hic requiescet corpus tuum" (Peace to you Mark, my evangelist. Here will rest your cover).

Thus began an indissoluble bond between the Serenissima and the Saint.

At the news of Mark's death, the Venetians, already in his adoration, had the sole purpose of bringing his holy remains, confiscated in Alexandria, back to the Lagoon. But there was a fundamental political problem: at that time Egypt, after having passed from Roman to Byzantine domination, fell into the hands of the Muslim Arabs. The emperors of Constantinople, therefore, forbade all the regions of the Empire to have any relationship with them: it was absolutely forbidden to go to those lands and trace lines of trade. Venice in that historical moment was linked to Byzantium but was beginning to attempt the path of independence, and the recovery of the remains of St. Mark was the first step in that direction. In spite of any prohibition and with great courage, the Doge Justinian Partecipazio ordered the risky expedition, sending a fleet of ten merchant ships to the lands of Egypt with the unofficial purpose of stealing the Saint's body, before the Muslims managed to destroy all the Christian buildings of worship. But the Doge's purpose was also profit-making: Mark had managed to evangelize the Venetians, and if he had succeeded in bringing his remains back to Venice, the city would have become a pilgrimage and worship destination, with rather interesting economic implications. It was November 827. Once arrived at the destination, however, the difficulty was to find a way to accomplish the goal without being discovered. The dangerous operation was only successful thanks to the brilliant intuitions of two merchants who were part of the expedition: Buono da Malamocco and Rustico da Torcello. They managed to reach an agreement with the guardian fathers of the sanctuary where the holy body was kept, who were in favour of the transfer, in order to make an exchange: the body of Marco was replaced with that of Santa Claudia, with the aim of delaying the discovery of the theft as much as possible. However, the dilemma of transferring the body to the port and embarking the coffin remained to be solved, since the goods were subjected to strict customs controls before leaving the Egyptian territory. But Buono and Rustico still showed far-sightedness and cunning: they placed the Saint's body in a large crate and covered it with vegetables and especially pork. They knew very well that the pork meat was considered unclean by those people, so that at the control no one would ever touch it, not even being able to sustain the sight of it. So it was! The crate with the remains was able to board the merchant ship that sailed undisturbed from the port to the open sea.

The operation was to be considered perfectly successful.

The fleet returned to Venice on January 31 of the year 828, welcomed by a festive people in acclamation of the two brilliant merchants considered true heroes, and especially the Saint: from that day the Serenissima decreed St. Mark as protector of the city in place of St. Theodore, taking as his symbol the winged lion with the book. Many people think that this choice is due to the apparition of the angel who had Mark in a dream when he shipwrecked the Lagoon, but in reality this is partially true, as there is another motivation, closely related to the sacred scriptures. Each of the four evangelists, in fact, is associated with an iconic symbol linked to his own Gospel and verse 4.7 of Revelation, and the symbol of St. Mark is the lion, since it is his Gospel that contains the greatest number of prophecies of Christ about his resurrection, and the resurrection is represented precisely by the lion, thanks to his strength and pride.

Since the times of the Serenissima, the winged lion has been the undisputed and omnipresent symbol of Venice, the emblem of a city with a glorious past and the pride of a present so strongly linked to its roots, its millenary traditions.

The lion with its big wings is always represented with a book on which are reported the prophetic words that the angel addressed to Mark, and usually in two positions: andante, that is standing on 4 legs, and moleca, that is sitting. There is, instead, no historical evidence about the position of the book: it is thought that when it was represented open it was a sign of a period of peace, while when it was closed it indicates an omen of war. But there is absolutely no historical evidence about it, it would be, rather, exclusively a fascinating legend.

But where are the coveted remains of St. Mark's today? Would you believe it if I told you that after the dangerous operation served to bring them back home, they were then lost twice? Yes, incredible but true! The year after the repatriation the construction of the great basilica that would have kept the relics began. In the meantime, the relics were walled up in a very secret place that only the Doge and the primicerius knew about. A hiding place so efficient that at the end of the construction no one knew what it was, even because of the death of those who kept the secret! The holy body was then found during the consecration mass of St. Mark's Basilica, on April 25, 1094: legend has it that the marble covering a column in the right aisle gave way and the box containing the relics was uncovered, while a sweet perfume spread through the air. For fear that the remains were stolen, they were once again very well hidden, and once again they were lost. They were only found completely fortuitously in 1811.

Today Saint Mark rests, finally and serenely, in the crypt under the altar of the magnificent Basilica dedicated to him, far from any worry of theft, and quietly watches over Venice and Venetians.

The rosebud of San Marco, an ancient tradition that smells of red roses 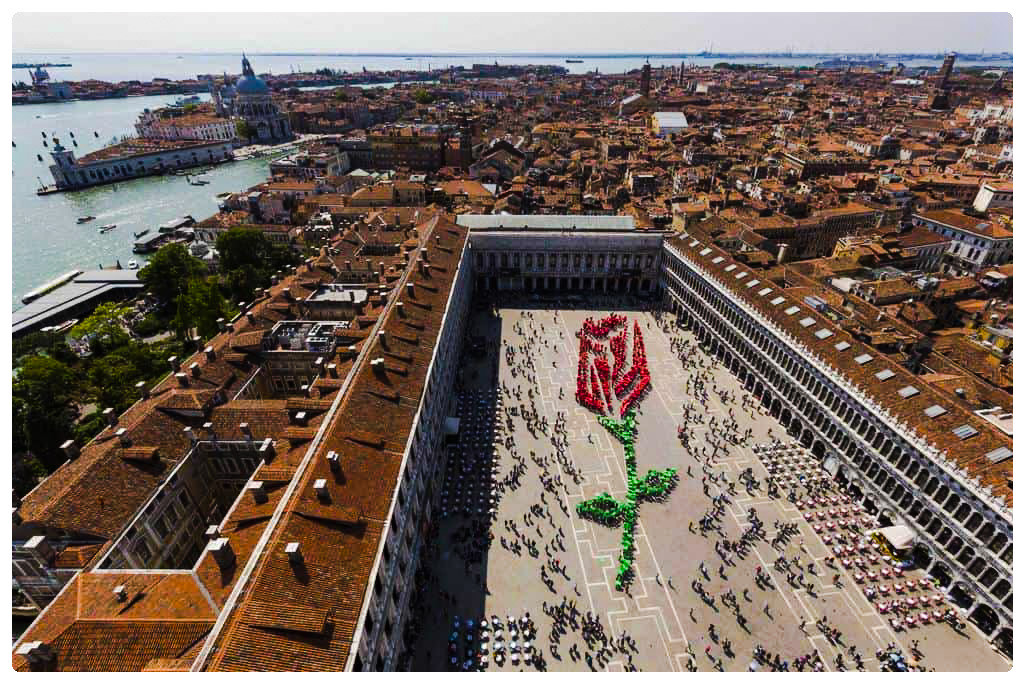 The celebration of St. Mark's on April 25th is linked to an ancient and very romantic tradition: the feast of the rosebud, which refers to a great love of the past.

It was the time of the Serenissima when the daughter of the Doge Angelo Partecipazio, the young and beautiful Maria called Vulcana, with long blonde hair, fell madly in love with the young Tancredi, a humble and passionate storyteller with great charm. But the social difference was an obstacle to the crowning of their love: the Doge, in fact, was very opposed to giving his daughter in marriage to the young people. So Mary, strongly determined to find a stratagem for her father to accept the boy, advised her beloved to join Charlemagne's army and go and fight against the Moors, so that his glorious deeds would make him worthy of the young aristocrat in the eyes of all. And in the end so it happened, becoming Tancredi one of the most valiant fighters, next to Orlando and Rinaldo. But shortly before his return, when he had already tasted the warmth of Mary's embraces, he was betrayed by his youthful impetus and inexperience, and died in battle. Legend has it that Tancredi fell to his death in a rose garden and managed, before he died, to cut off a rose and ask his companions to have it delivered to his beloved. So the paladins led by Orlando returned to Venice and gave the girl that rosebud still stained with the blood of the young man. Too much pain to be borne by a heart so young and in love. So the maiden didn't say a word but locked herself in her room, where the next day she found herself lifeless with the rosebud of her Tancredi in her hand, tight on her heart. It was April 25th.

From that day on, tradition has it that on the anniversary of St. Mark's the lovers will pay homage to their loved ones with a red rosebud, as a promise of eternal love.

In memory of Maria and Tancredi.