Burano lace: an ancient art of passion and dedication 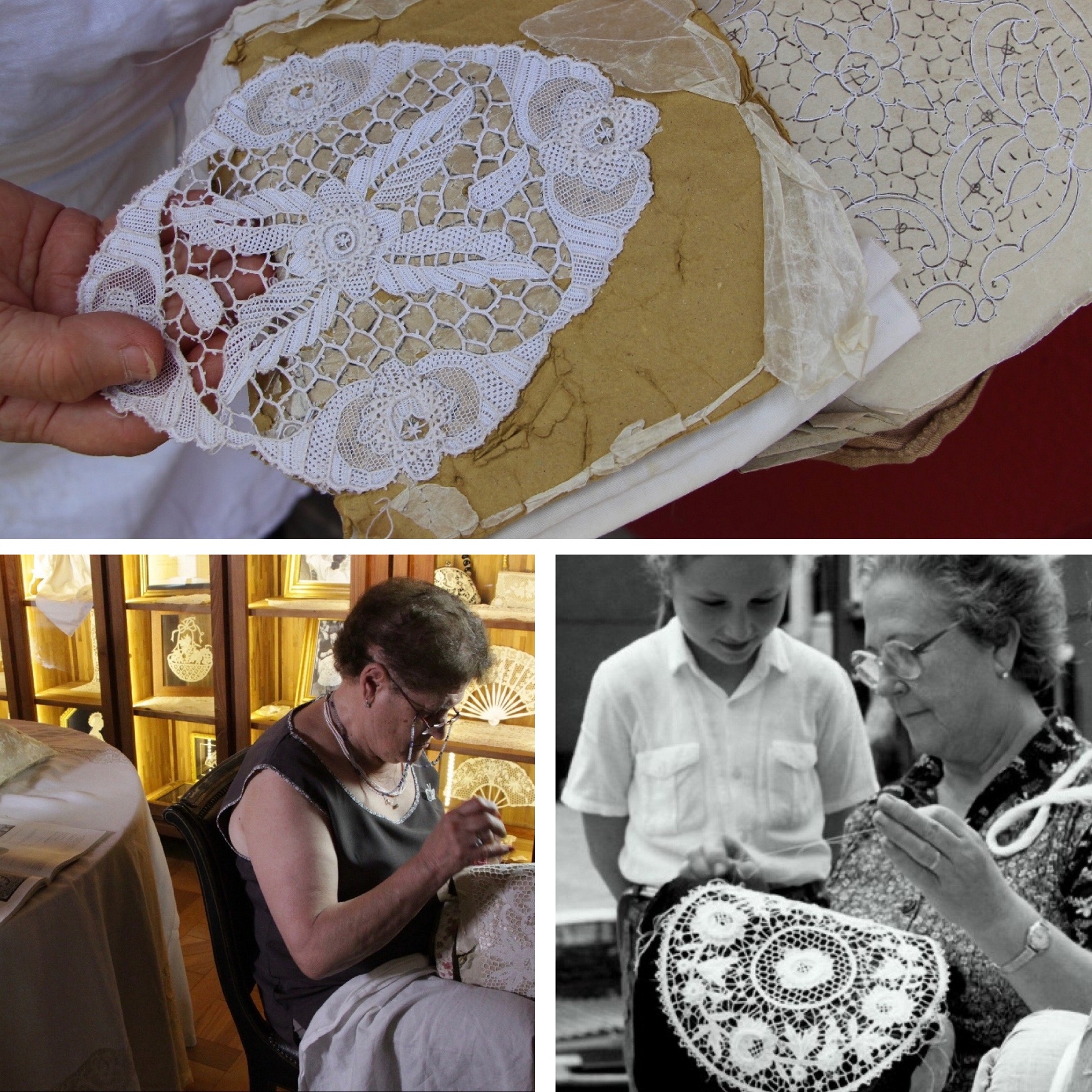 The high Venetian artistic craftsmanship in one word: Burano lace, a story that combines passion, tradition and dedication.

The history of lace is lost in the mists of time and is linked to conjectures or legends. For some, the typical buranella processing would be connected to the seafaring tradition of the inhabitants of the small island, linked to fishing and consequently to the manufacture and repair of the nets on site.

A strong push for the spread of this type of craft was given by the dogaressa Morosina Morosini, who at the end of the sixteenth century created a laboratory in Venice, in which 130 lace makers were employed. Upon his death the workshop was closed, but the art of lace continued to be cultivated. Given the strong demand, they studied to organize the production and marketing of Venetian lace: the Guild of Merciai took on the prerogative, organizing work in homes, orphanages, convents, hospices, islands, thus becoming in the century XVII (era of the lace boom in Europe) one of the richest guilds in Venice.

Over the years, Burano lace gained international fame. Rare and precious commodity, it became part of the trousseau of various European families of primary importance: at the coronation of Richard III of England (June 22, 1483) Queen Anna wore a rich cloak adorned with Burano lace; in the same way various members of the Tudor family, Caterina de' Medici, Bianca Cappello and several others purchased lace. Precisely through the work of Caterina de' Medici and - in later years - by Minister Colbert, some lace makers moved to France: in a few years, the buranelle lace makers became over 200, teaching their art to French colleagues: the day of her coronation (May 14, 1643) Louis XIV wore a lace collar made by buranelle lace makers, who had taken two years to finish it.

In the winter of 1872, thanks to the interest of the countess Andriana Marcello and the honorable Paolo Fambri, it was decided to try to revitalize the ancient tradition of Burano lace, with the main purpose of alleviating the sad economic conditions of the island. An old lace maker named Vincenza Memo – called Cencia Scarpariola – who remained the last custodian of all the secrets of art, was then asked to pass them on to the elementary teacher Anna Bellorio d'Este, who in turn passed them on to her daughters and to a group of girls. So it was that the Burano lace school was born in the ancient palace of the podestà, thanks to the orders of the countess Marcello and a series of noblewomen whom she asked – among which the princess of Saxony, the duchess of Hamilton, the countess Bismarck, Princess Metternich, the Queen of Holland and Queen Margaret – made work and commerce flourish again. In 1875 the Lace School already had over 100 students.

The school worked for six hours a day in winter, seven in summer. She was admitted to 12 years after six years of home education. At the age of 18, he passed into the group of expert workers until the wedding, after which he returned to work at home. According to a list of pieceworkers of 1876, the lace makers were divided by operations: Ordidura, Rete, Guipure, Relief and Fillings, Stars, Piccò, Detachment, Cleaning, Unions.

The technique that characterized the lace school of Venice and Burano was the point in the air, performed with the use of only needle and thread, without any support. Over the centuries various stitches were used, some of them invented by buranelle lace makers. Among them, we remember the Venice point, so called because it recalls the bridges of the city, the Burano point, network made with very fine thread, which recalls the nets of the island's fishermen, the needle point, the pink point, the hood stitch, etc. Typical of Burano lace is the strictly needlework: the original Burano laces are distinguished by the extreme complexity of the design and the executive technique, the use of very thin threads (of cotton, linen, silk, gold or silver) , and consequently an extremely long process, for which a study and an often decades-long application is a must.

Atelier Martina Vidal Venice: guarding and passing on the tradition of Burano lace 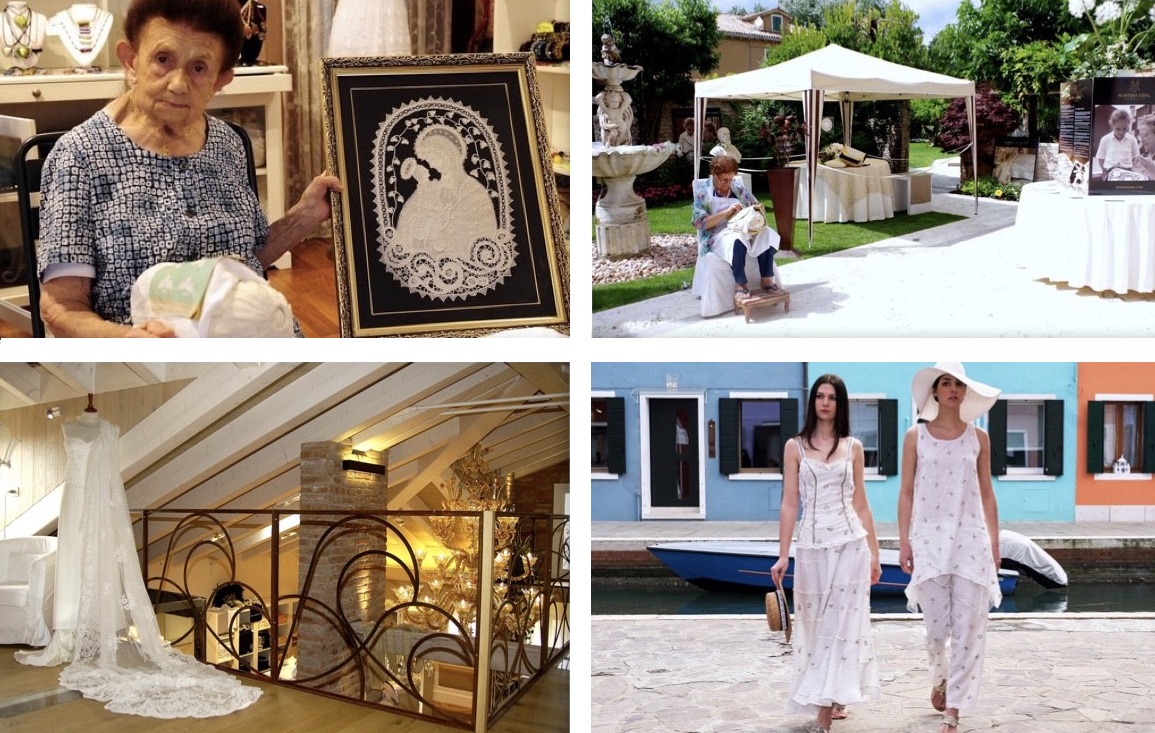 Martina Vidal Venice has its headquarters in Burano, the island known worldwide for the extraordinary craftsmanship of Venetian lace.

An extraordinary manual skill that fascinates visitors from all over the world every day. The collection of antique laces that once served to embellish the most important houses in Europe and to adorn ladies and knights on the most important occasions, today is a precious museum visited by the most demanding collectors. In the Atelier you will also find the modern "Burano Collection" consisting of tablecloths, table centerpieces, sheets, handkerchiefs, collars, fans and wedding veils.

The Atelier Martina Vidal Venezia is a linen store for the home and beyond, going as far as graceful and delicate women's clothing, designed by the brothers Martina and Sergio Vidal as a concept store where you can live the experience, knowledge and skill of ancestors and where customers are satisfied by the search of authenticity and originality. Born as a small artisan workshop, today the Atelier is presented in a three-storey building and the products on sale concern accessories and linen not only for the home but also for the person. To complete this wonderful setting, the Venice Secret Garden: a garden created from a typical Venetian garden where guests can relax and enjoy the peace of the island, perhaps drinking a cup of coffee.

The collections are proudly Made in Italy, the result of great craftsmanship and creativity, made with fine fabrics of the highest quality: cashmere, silk, cotton satin and the best linen yarns. A collection is dedicated to hand-embroidered linen. The continuous search for particularity and beauty is linked to Italian culture and tradition so that the knowledge handed down to us can be the key to inspiration and success.

The Atelier was visited by numerous princes, jet set characters and international actors. When you enter the Atelier, what you hope for is to have a unique and personal experience, to be able to carry the memory of the day lived on the island of Burano in your heart.

The MARTINA VIDAL Atelier is in