Chioggia: a jewel on the lagoon among the best places to visit in Italy

Chioggia, known as 'little Venice', is one of the most beautiful cities in Italy, a finalist for the title of Italian Capital of Culture 2024 and recommended by the New York Times as one of the 52 top travel destinations 2022. It is a pretty little fishing town on a group of small islands connected by bridges in the southernmost outpost of the Venetian lagoon. It is a small world known to few, with a strong soul and a heart on the water; here, the seasons are marked by the cycle of nature rather than the calendar. But Chioggia is also an ancient city rich in history and culture. It is cheerful and lively, with its characteristic colours and scents, immersed in an area whose identity is inseparable from the sea. In this article, you will see that Chioggia is one of the unique places to visit in Italy. Still, above all, it is the city of the five senses, which here find space to express themselves in every moment of everyday life, all together.

The taste of the sea and history 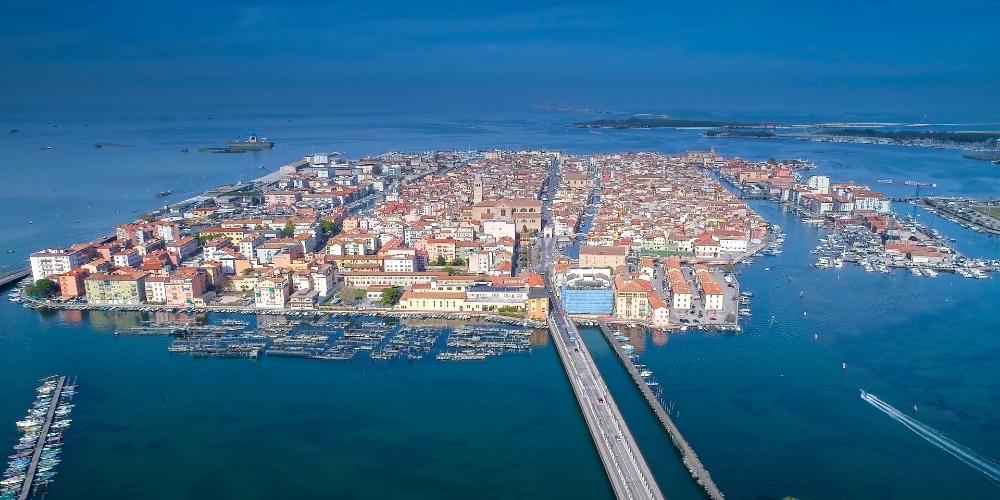 The story of Chioggia begins like this. Aeneas and a handful of companions fled from the destroyed Troy, searching for a new life, new landings. Among them was Clodius, who, according to legend, was the mythical founder of ancient Clodia, or Chioggia. Archaeological research gives another version: the city was founded at the beginning of the second millennium BC and is much older than Venice. In its history, it was fundamental to the Venetian Republic thanks to its salt pans, and here is the first taste of Chioggia: the flavour of salt. This precious gift of the lagoon made it the ancient salt capital of the Mediterranean. For a long time, salt remained the primary source of livelihood for the local economy until the rich salt pans gradually disappeared. In the 18th century, a new activity, fishing, brought Chioggia to be the most important fish market in the northern Adriatic and to have one of the largest fishing fleets in Italy. Just think, if we look at it from above, even the 'forma urbis' is herringbone shaped with canals and calli. This urban layout intrigues and fascinates, and here the morphology of the land has been adapted and made functional for fishing. The fish here also has a unique flavour and an enormous variety, including gilthead bream, sea bass, sole, sardines, anchovies, seafood of all kinds, and then prawns, crabs, mantis shrimps, scampi and much more. The city celebrates its symbolic product at the Sagra del Pesce di Chioggia (Chioggia Fish Festival). For the last 80 years, for 10 consecutive evenings, this festival has transformed the city centre into a big table under the stars, where you can enjoy the best that the land and sea have to offer.

The lively sounds of a world floating on water 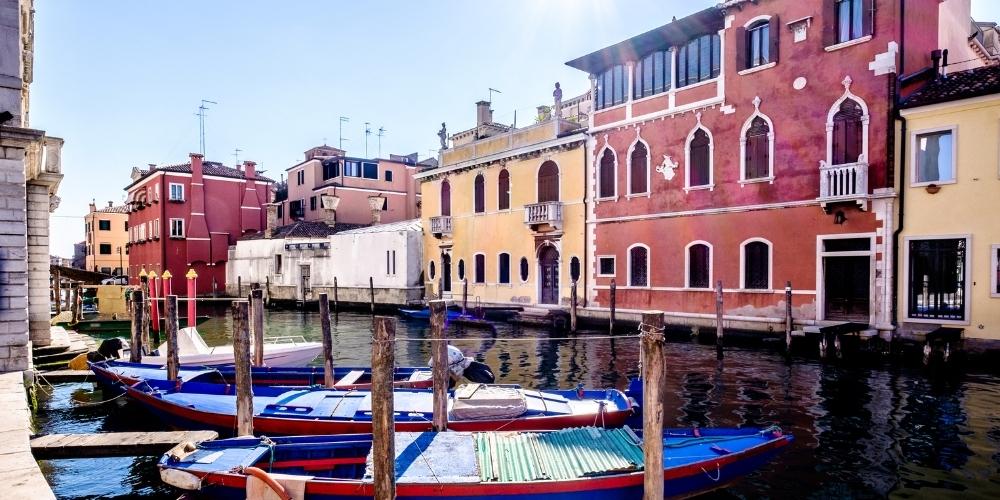 Chioggia greets the dawn with the sound of fishers' boats leaving at four in the morning to return with fish for the market in the afternoon. Then the day comes, the song of the seagulls invades the clear air. In Chioggia, you can constantly hear life flowing through the streets, with the chanting of the dialect recounting the moments of everyday life. Meanwhile, the elegant Venetian palaces are silently mirroring in the water. Walking along Corso del Popolo, the street that crosses the old town centre for 840 metres from north to south, you get the impression that every day here is a party. It resembles a single 'grand open-air café', embellished with a series of porticos on the western side. On the northernmost section, it curves a little, just enough to break the gusts of the Bora wind that hisses in from the northeast. Here, along the calli or in the small squares, you will probably come across theatrical rehearsals of Carlo Goldoni's Baruffe Chioggiotte, a play that the great 18th-century playwright dedicated to the fiery character of the inhabitants. Every Thursday, the entire Corso is transformed into one of the largest local markets in the Veneto region. In dialect, it is called 'el zioba' (Thursday), a fixed appointment for every tourist who wants to enjoy this authentic moment and for the local people. Since 1852, 164 years later, the market has been an integral part of the life of a town that pours into it every Thursday. In the voices of the people, you can hear the sound of recurring names and surnames, but with some curious differences.

Chioggia is an almost unique demographic case in Italy because this little universe on the water has long been isolated from the mainland. So too many cases of homonymy arose. To distinguish the various branches of the same family, the locals invented nicknames - some rather bizarre - called 'detti'. Since 2009, the Italian state has officially recognised them and included them in identity documents. A few examples? The Boscolos (the most numerous) have over 190 nicknames, and the Tiozzos over 50, born of their social context, area of origin and family traditions.

Between the Canale della Vena and Corso del Popolo is the Fish Market. Here the 'mògnoli' (fishmongers) offer the best local fish amidst the noise of hurried footsteps of customers looking for delicacies and special offers. The Fish Market is one of the oldest institutions in the town. Here you can experience a feeling of times gone by, a lively atmosphere where locals mingle with tourists taking photographs and the curious.

The colours of boats and wild nature

The sun seems to madly love the moment when it sets and lets itself slip into the horizon. That giant orange sphere peeps out between the meshes of the fishing nets and between the wooden poles of some building sticking out of the water. It paints the sky an intense colour with a thousand warm shades, and the lagoon shines while everything else loses its colours and turns dark. There is silence. Some people decide to celebrate this magical moment by going on solo excursions or boat parties. All around, the lagoon, with its shades from dark green to midnight blue, is home to a still wild nature that hides small treasures, as happens in the 'barene'. These semi-submerged lands are considered a microcosm in themselves, with a great variety of birds and a characteristic flora that changes with the seasons, completely altering its appearance and colours. The various periods of the year are marked by different shades of colour due to the prevalence of one or other plant species, with hues ranging from golden, red, deep purple, cerulean green and yellow. The result is a perfect place for nature lovers because here it seems to be light years away from the chaos of the metropolis. 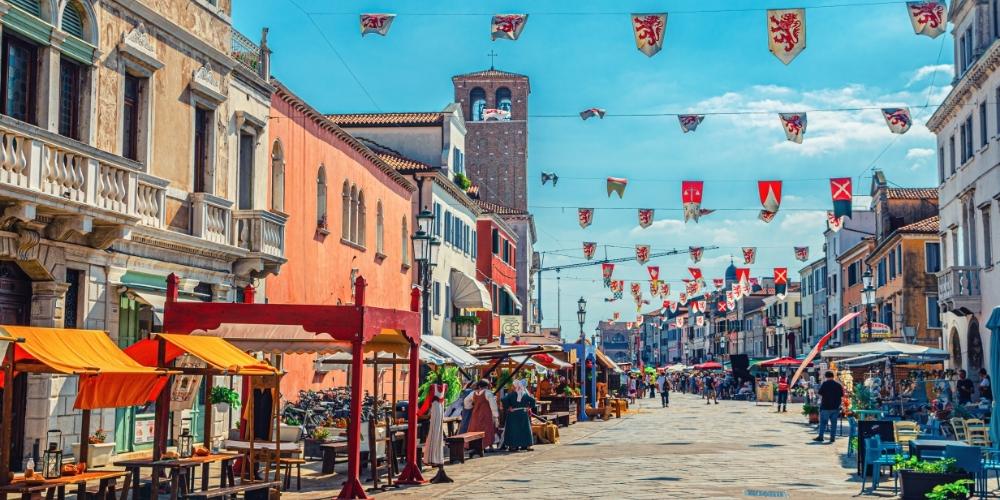 Turning our gaze to the water, we see a sail as sharp as a shark's fin, painted brick red and ochre yellow, sailing towards the sun: it is a Bragozzo. These typical Clodians boats were born for trawling in the lagoon and later strengthened to go out into the open sea. Their traditional appearance is immediately recognisable: round prow and squat stern, with the hull covered in black pitch and decorated with religious images. On their sails, religious symbols and emblems characteristic of the owner's family served to recognise each other at a distance. The Bragozzo, however, is not the only colourful boat in the city. Chioggia is also fascinating if we venture out for a walk along its canals, where brightly coloured boats wait impatiently for the next excursion into the lagoon. Another ship, the Marciliana, is so famous that it names the Palio de La Marciliana. Every year on the third weekend in June, the city goes back to the 1300s to commemorate the War of Chioggia. You can see medieval encampments, dances and simulated fights, and the Palio della Balestra (crossbow contest) takes place. Men, women and children parade in fourteenth-century costumes along the Corso del Popolo, which is coloured with red and white banners and all the shades of old clothes.

The soft sand of an endless beach 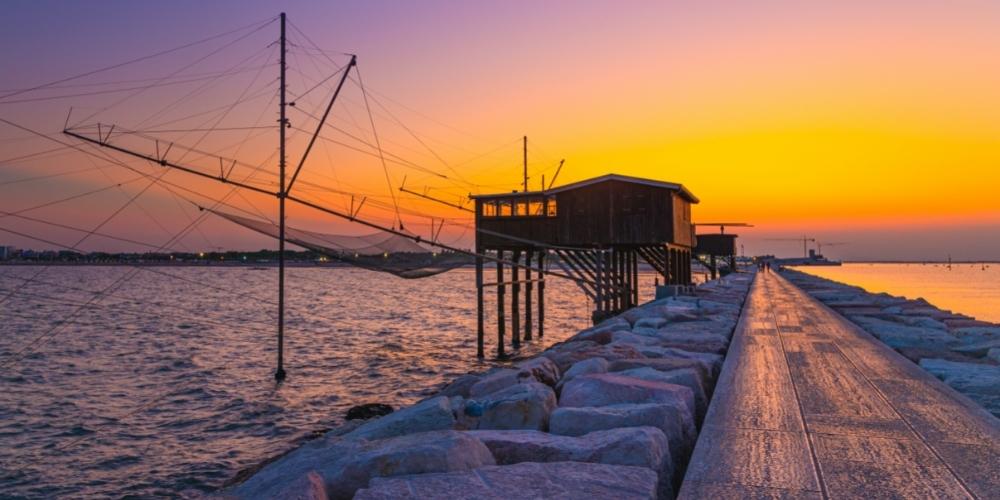 A bridge unites Chioggia and Sottomarina, two worlds so close and yet so far apart. The former is bound to its traditions. The latter is a tourist destination for the summer holidays, attracting bathers from neighbouring towns and various European countries. Sottomarina lies beside the lively, fresh seawater, where the colourful fishers' houses and the hotels' pastel shades overlook a seemingly endless vast coastline. Here in summer, you will find all kinds of attractions for all ages, both on the sand and in the clubs. Sottomarina's beach is ideal for long walks. The sand here has something special: it is rich in iodine, and you can get a tan like in a few other parts of Italy. Walking barefoot on the soft sand, you can reach the cyclopean, rough boulders that form the Sottomarina dam. Here the fishermen's 'casoni' with their nets look out to sea motionless as if even they wanted to enjoy such a romantic spectacle in silence.

The scent of carefree days and local cuisine 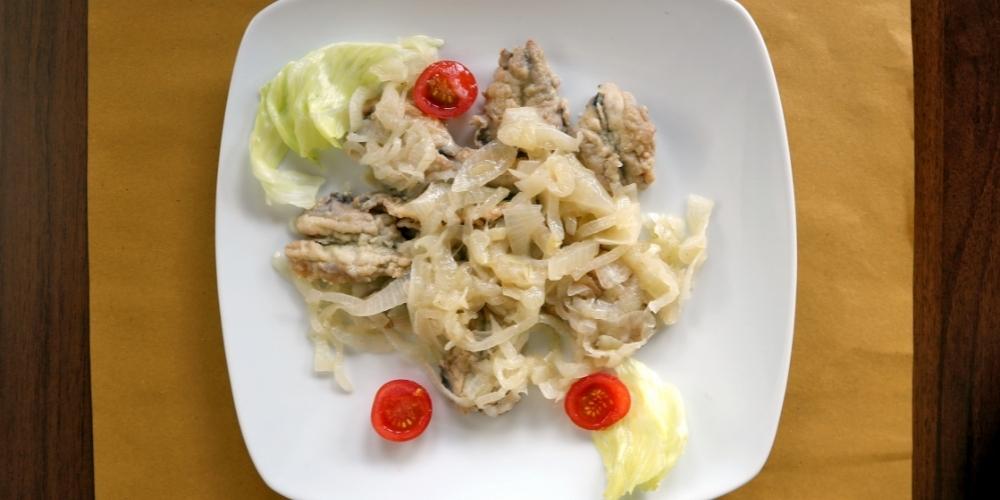 Carried by the wind, the fragrances of the bathers' sun creams mingle with the smell of saltiness, and everything seems even more intense under the rays of the summer sun. In the evening, the beach umbrellas close and people leave the beaches. You cannot miss a walk through the streets of the centre of Chioggia: this is the moment when the scents of typical cuisine invade the air. In the homes and fish restaurants, people start cooking traditional dishes of the city's cultural heritage, to which the inhabitants are very attached. These include the famous 'Sarde in saor' (fried sardines with white onions from Chioggia cooked in white wine vinegar), the 'Bigoli in salsa' (long pasta with a sauce of salted anchovies), the 'Peoci in cassopipa' (mussels cooked with onion and garlic) and so on. The city is very fond of its sea and land products, such as the 'radicchio di Chioggia IGP' called the 'Rosa di Chioggia' (Rose of Chioggia). Local tradition has created dishes with flavours as authentic and decisive as its inhabitants by using these ingredients. Chioggia is more or less this, but it is much, much more in reality. If we had to describe it in one word, we would say that 'Chioggia is passion', and here, you can feel this passion everywhere.