Discovering Malcesine: a village between rocks and fresh water

Where to spend a holiday in this remnant this summer? On the sunny seaside or on the chilly slope of some mountain? Why not a combination of both? On the North-eastern side of lake Garda, still within the Veneto region, a perfect spot makes your dream come true, the little town of Malcesine. Here you can find everything you can demand from a holiday: tasty food, local boutiques, relaxation, yet also sportive adventures, excursions, entertainment and culture. Basically, an all-round Italian experience. 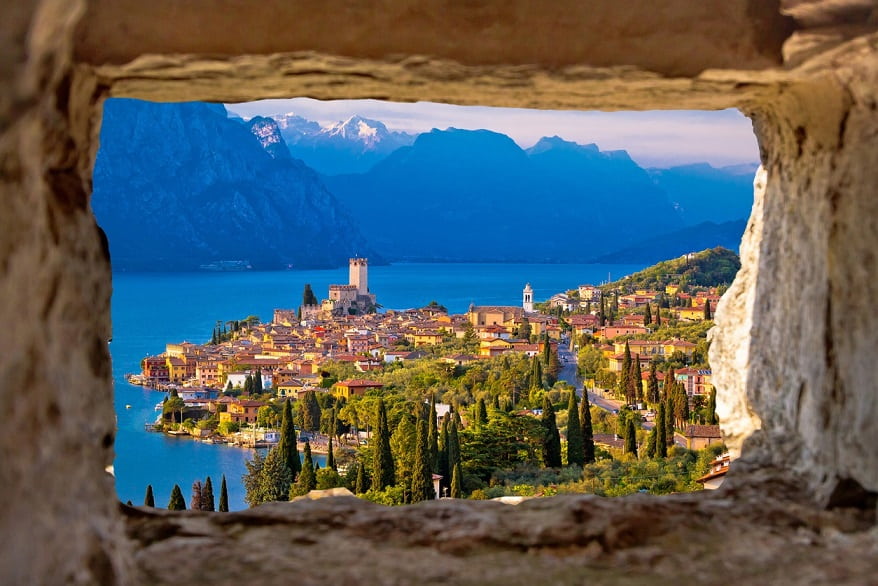 Malcesine is a little town curled up between Lake Garda and the slope of Monte Baldo. Thanks to its strategic position and its special shape, characterized by a majestic rocky spur arising from the Lake, Malcesine is one of the beloved treasures of Lake Garda. It stretches along the Via Gardesana Orientale, the panoramic road flowing alongside the shores of the Lake hugging it from side to side.
In Malcesine, the combination of the sparkling water and the verdant side of the mountain, standing out immediately above the town, gifts abundance of natural beauties. Moreover, its history and its influences from the neighbour regions of Lombardy and Trentino Alto Adige enrich the town of peculiar cultural heritage. Although its small size, Malcesine offers a stunning scenario for sport adventures, educational discoveries and relaxing idleness. Here, a visit is worth all year long.
To reward the quality of this place, Malcesine has also been declared “Borgo Bandiera Arancione” by Touring Club Italiano, which recognises the excellence of Malcesine’s tourism services and the high value of its tourism offers, attentive to sustainable development, local handicraft, great hospitality and promotion of local resources.

Although Malcesine has been occupied since circa 1500 BC, when the Libui settled down there, over the centuries it became home for several different populations, such as Etruscans, Romans, Ostrogoths and Langobards. From 1277 the ruling family of Verona, the Scaliger, was in charge of the Town, losing the power when the Visconti of Milan conquered part of the Lake in 1387. Afterwards, Malcesine got conquered by the Republic of Venice in 1405, which controlled the territory until the rise of Napoleon, in 1797. Finally, in 1815 Malcesine, as the entire Veneto region, passed under the control of the Austrian – Hungarian Empire until 1866, when the Risorgimento’s uprisings led to Italian unification.
Today, Malcesine still preserves the characteristics of its Medieval times, with small squares, narrow streets, brick arches and small old colourful houses attached to one another. The ground floors of the ancient houses have been turned into handicraft shops, ateliers, bistros and local restaurants, unveiling, once in a while, vegetable gardens and terraces with perfumed olive trees. The old town is teemed with thousands of tourists every day, especially during the warm months, from May to September; they make up a lively and joyful atmosphere.
The essence of the history merging with the present is tangible in two buildings of the Old Town. The first one is the today town hall of Malcesine, the Palazzo dei Capitani, built during the Scaliger’s dominance, with the purpose of being the venue of their governance. In 1902 it was declared national monument since it is still able to evoke its ancient splendour. The venue presents the Venetian - gothic style, due to renovations during the Venetian sovereignty and today it is also used as cultural venue, hosting visitors, offering concerts and public events. 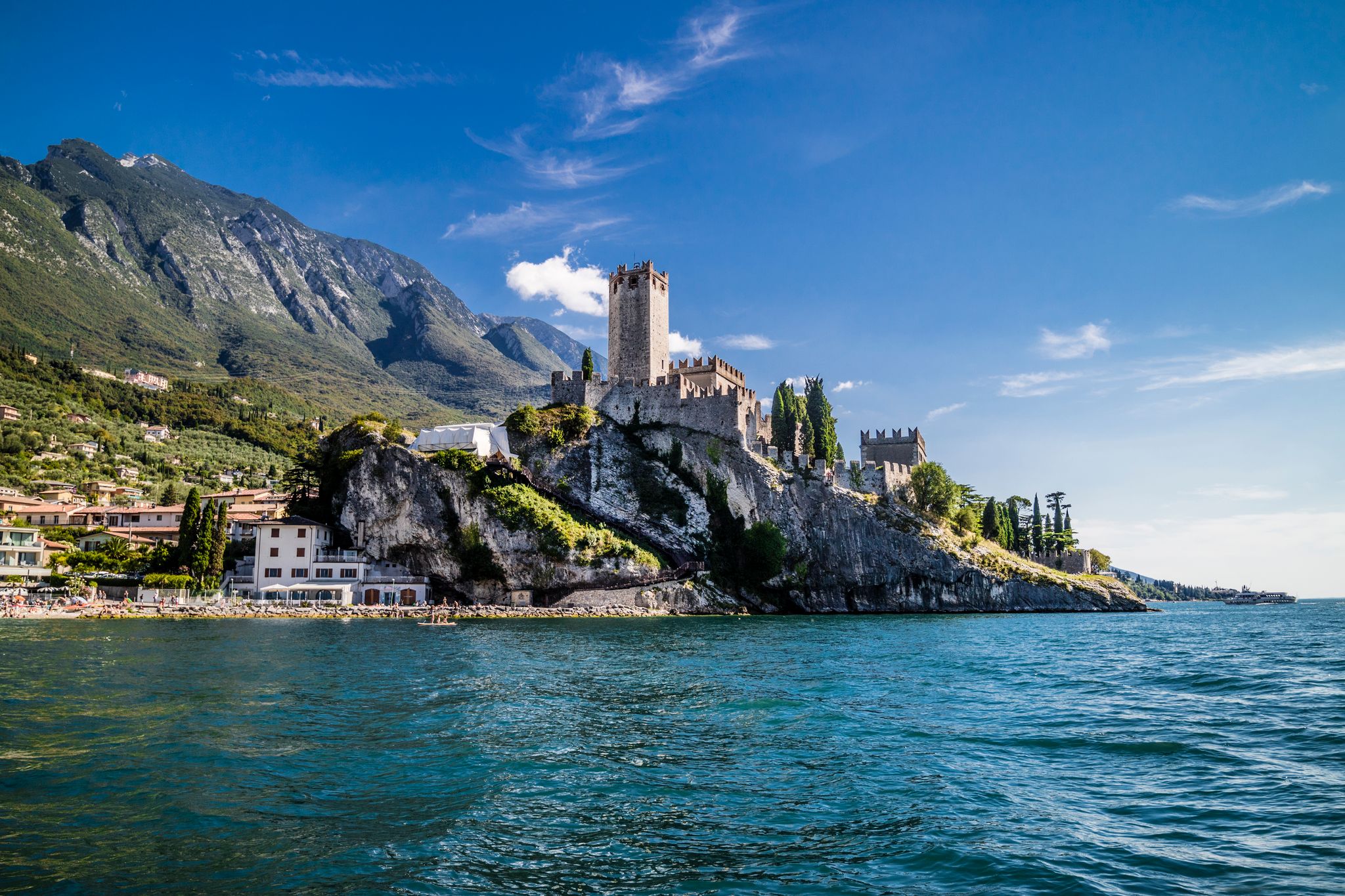 The second building needs a paragraph on its own, due to its physical prominence over the town, yet also because of its architecture and the permanent exhibitions it accommodates. This is the Castello Scaligero, built firstly by the Langobards, destroyed, rebuilt and eventually renovated by the Scaliger Family, which gave the Castle the medieval shape it still preserves today. The Castle is a stunning venue with courtyards, a hidden balcony, fortifications and a tower rising for 70 meters above the lake. In the Castle there are several spots where the lake and the mountains can be admired in their perfect harmony. Even eminent personalities, such as the writer Goethe and the painter Klimt, fell in love with the Castle and praised its colours and its charming atmosphere in their works of art.
The Castle offers events, concerts and also several permanent exhibitions. There is the “Sala Goethe” with documents and anecdotes of Goethe’s travel around Italy. Then, on the ground floor of the Scaliger’s Residence you can find the “Museum of Fishing, lake activities and of Galere Veneziane”. Yet, the real gem of the Castle is found in the old “Casermetta”, where the Natural History Museum of Baldo and Garda has been renovated in 2008, becoming an interesting and truly amusing interactive museum. If you love lake Garda, this Museum is a must-see. It is possible to learn so many information and curiosities about the history, the morphology, the flora and the fauna of the area. Once the visit is over, you will appreciate the lake even more. The nine rooms of the Museum lead you in a path from the bottom of the lake Garda, to the peak of Monte Baldo, discovering animals, touching fish, hearing the noises of vegetation and smelling the scents of the two places. The Museum is the perfect combination between education and entertainment. 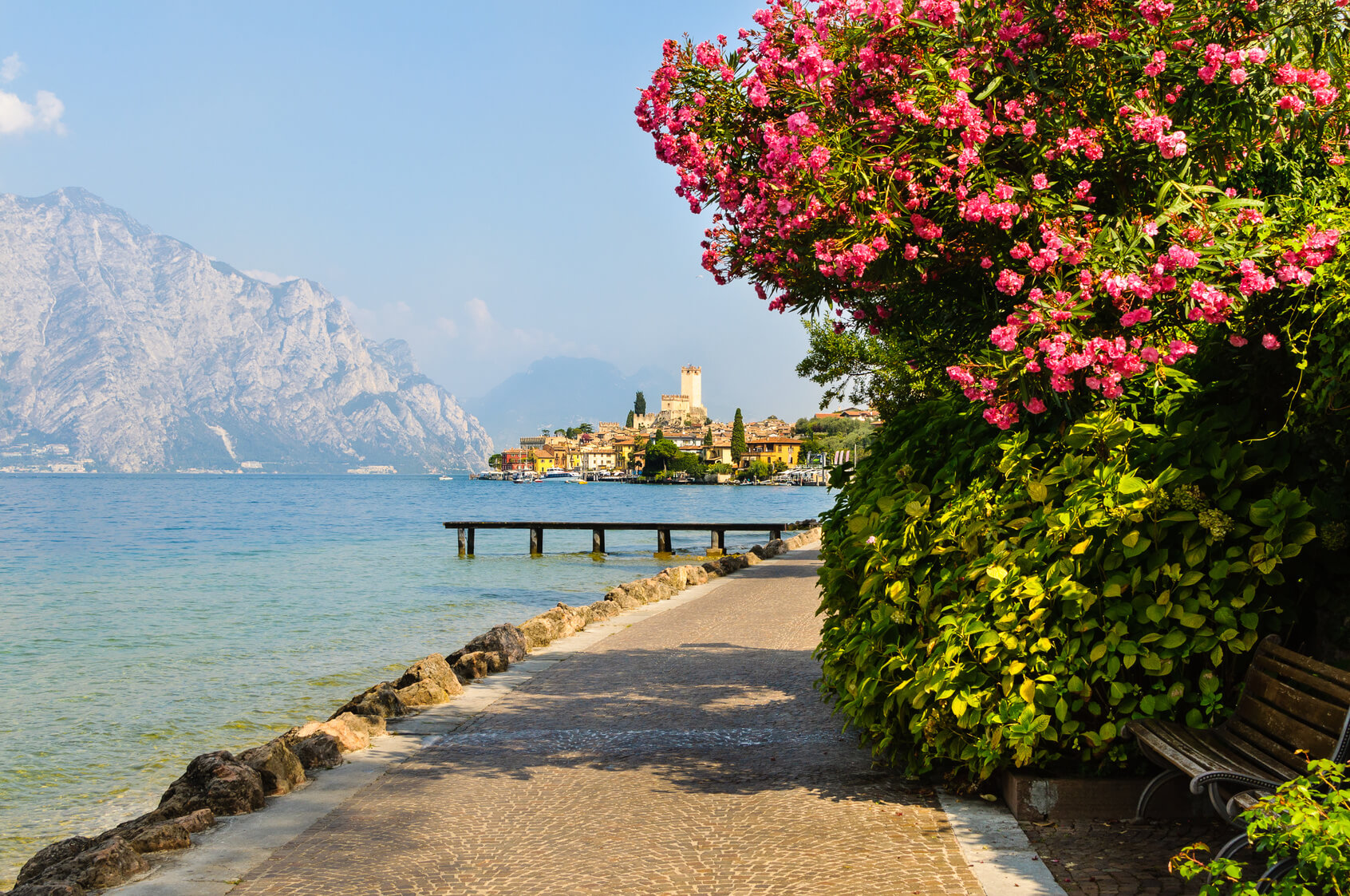 A lake side promenade lets you walk alongside Garda shore for kilometres, passing by bars, café and rocky beaches of different sizes. Find your niche and jump in the tempting water of the lake. From June to September the average temperature of the water is 24°C, that is a pretty suitable temperature for comfortable swimming. The water is crystal clear with thousands nuances of blue, it is also clean and it is not salty! Also the weather outside the water is ideal. lake Garda, in fact, is always accompanied by several different winds, like the Peler from north to south, or the Ora, the wind of the windsurfers. Therefore, on the shore, the climate is mild, with a constant breeze driving away mugginess and over-sweat.
In front of you, two islands appear in the middle of the lake: The Island of Olive Trees and The Island of Dreams. The former one has a wild vegetation and it is famous for scuba divers seeking underwater caves and endemic species of fish. The second one, with a truly evocative name, can be reached on foot when the water of the lake is shallow. This Island is also a well-known spot for scuba divers, since a shipwreck lies nearby, on the bottom of the lake. This is a real amusement-park for scuba divers. 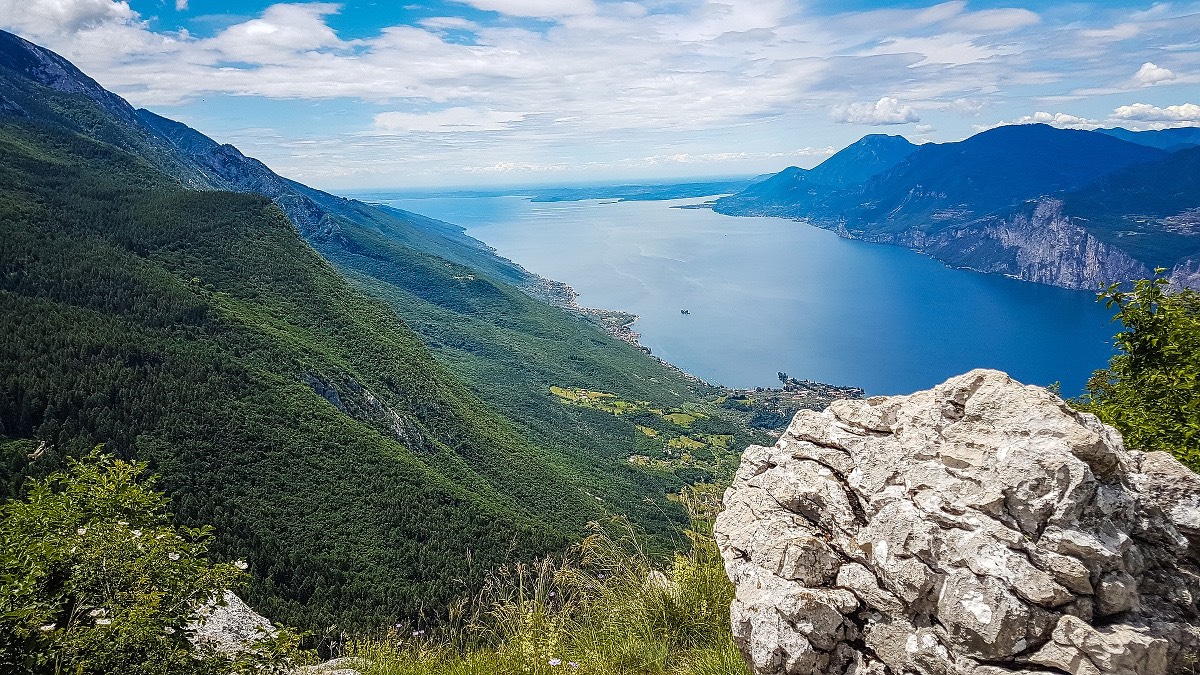 From the bottom of lake Garda emerges a steep mountain range reaching with a leap peaks of over 2200 meters. This is Monte Baldo, peeking out over Malcesine with all its massive presence. It is said that Monte Baldo is the "garden of Europe". Indeed, thanks to the influences of the underneath lake, the climate is favourable for both the Mediterranean and Middle-European landscapes. the outcome is a great variety of flowers, plants and trees. The fauna of the Baldo is abundant as well. The animals live between 60 and 2000 meters of altitude and the list includes foxes, marmots, deer, chamois, badgers and rarely even some – harmless - bears.
Monte Baldo is optimal for winter sports, such as snowboarding and skiing, yet, it also offers great opportunities in summer. You can hike the slope up to the peak or you can use the funicular railway to reach the top effortless, enjoying the all-round view of the entire lake, from Lombardy to the northernmost shore of Trentino Alto Adige. Once on the top, as usual at lake Garda, an extreme sport adventure is waiting for you, in this case, it is paragliding. If you are willing to try, this is a breath-taking way to sightsee Malcesine from above.
In brief, the water, the weather, the mountains, the sports, the culture and so on: there are a great deal of reasons why you should stop by Malcesine for a visit. You have just to come here and choose yours.
Seguici sulla nostra
pagina Facebook