On the San Giorgio Maggiore island there is one of the most beautiful parks in Italy: the Borges Labyrinth. Realized as a tribute to the famous Argentine writer 25 years after his death, the labyrinth, a space of 2,300 square meters, with over three thousand boxwood plants of about 90 cm height, is a true "green masterpiece". On 11 June 2021, the labyrinth officially opened to the public for the first time, ten years after its creation.

The San Giorgio Maggiore island and the Giorgio Cini Foundation 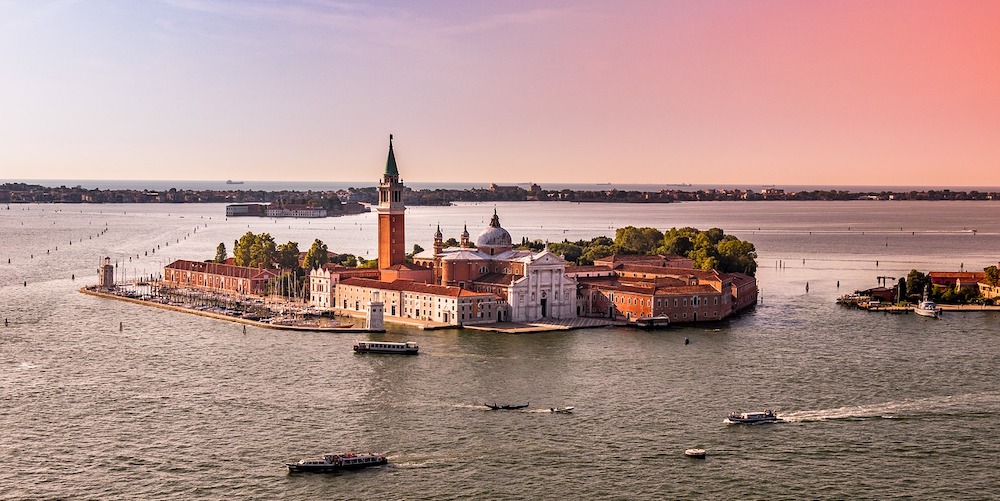 The San Giorgio Maggiore island is a small island located in front of St Mark's Square in Venice, just four hundred metres away. The first building you will see when you arrive in this little jewel of the lagoon is the imposing Basilica of the same name, designed by the architect Andrea Palladio in 1565. The island of San Giorgio is a magical and silent place, far from mass tourism, and for this reason it maintains its ancient charm. Here in the 10th century, Benedictine monks founded the first monastery, the Monastery of San Giorgio Maggiore, which is now the seat of the Giorgio Cini Foundation.

The Giorgio Cini Foundation, established on 20 April 1951, is a cultural and art centre with the aim of promoting the restoration of the Benedictine monumental complex on the San Giorgio Maggiore island and encouraging the development of educational, social, cultural and artistic institutions within its territory. The ancient buildings on the island have been restored and transformed into exhibition halls, auditoriums, libraries and the headquarters of various institutes and centres, part of the foundation, which all organise and promote exhibitions, study conferences and seminars. In 2011, the island was also enhanced with the creation of the Borges Labyrinth.

The most beautiful labyrinth in Italy: Labyrinth Borges

The Borges Labyrinth was created to mark the 25th anniversary of the death of the famous Argentine writer Jorge Luis Borges, designed by English architect Randoll Coate in collaboration with the Fundación Internacional Jorge Luis Borges and at the behest of Maria Kodama, Borges' widow. The labyrinth is a tribute to the writer's famous short story, "The Garden of Forking Paths", and along its path, which is just over one kilometre long, one can identify symbolic objects linked to the Argentine writer and present in many of his works, such as mirrors, hourglasses, a stick, a tiger, a huge question mark and finally the initials of his widow, Maria Kodama.

The 3200 boxwood plants, of about 90 centimetres height and gathered into hedges, which make up the labyrinth, are arranged in such a way as to create the name Borges twice, perfectly visible from above. Indeed, until now it has only been possible to "visit" the labyrinth from the terrace of the Centro Branca, part of the Foundation, being able to appreciate its panoramic view from here. From 11 June 2021 it is be possible, instead, to take part in guided tours, lasting forty-five minutes, right inside the labyrinth, accompanied by the music specially composed by Antonio Fresa, performed and recorded with the Teatro La Fenice Orchestra.

The visit to the Borges Labyrinth