1519-2019: 500 years since the death of the creative genius Leonardo da Vinci. Venice has always loved the Florentine artist, of whom he holds one of his most famous works: the Vitruvian Man. Palazzo Zaguri, a delightful exhibition center in Campo San Maurizio, celebrates this important anniversary with a beautiful and unique exhibition, an exclusive world premiere that manages to combine art, science, medicine and modern technology. You will be kidnapped! 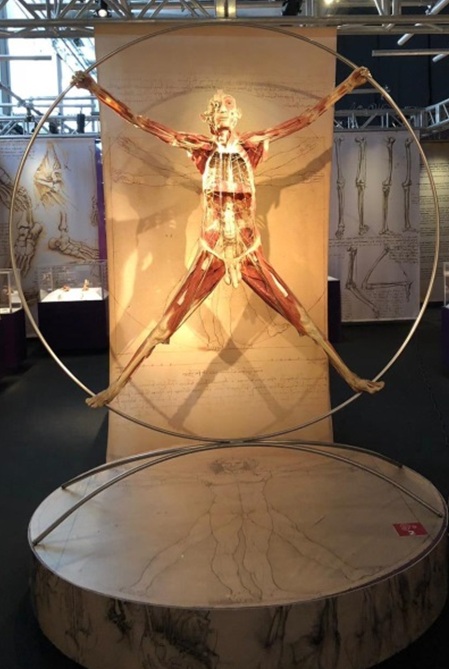 When one thinks of Leonardo da Vinci his genius is usually traced back to the creation of exceptional works and extraordinary machinery. But his genius went much further, reaching the scientific research that places him among the founding fathers of the primordial "notomia". A research that had as its basis the desire to bring the human body back into its most faithful form and that will then be the basis of all its future human representations.

This research of his went first to the study of the skull, considered the dwelling place of the soul and center of union of all the human senses, up to the skeleton and the muscles, the intestine and the most poetic fetus enclosed in the maternal womb. The collection of drawings resulting from this study by Leonardo is called the Windsor Code.

With the exhibition Authentic Human Bodies. Leonardo da Vinci, Palazzo Zaguri does not just put the visitor in front of the sketches of the anatomical research of the Florentine genius, but goes further, managing to give life and body to these works, giving them an unexpected and extremely interesting three-dimensionality. What should the visitor expect from this exhibition? The answer is the materialization of Leonardo's studies, the reproduction of the same with real parts of the human body such as the muscles of the arm, the vertebral column, the vascular system, the organs of the chest and the female abdomen, up to the Reproduction of the Vitruvian Man.

This magic is made possible thanks to the process of plastination, a technique developed in the nineties in Germany and which allows, with the elimination of liquids, the preservation of human bodies, making them rigid, odorless and even preserving their natural color.

The possibility of implementing this process is due to those who have given their bodies and organs to science, and their appreciation, respect and gratitude for this choice is infinite for them.

For this exhibition event, more than 3 years of research work were required, which saw the unanimous sharing of doctors, historians and art historians: the result is a surprising and revolutionary journey between the past of Leonardo's drawings and the present of the most advanced technologies, between science and art, between ratio and profound emotion.

Reborn Leonardo: 1st cloning in the world of the famous self-portrait, authorized by Royal Museums 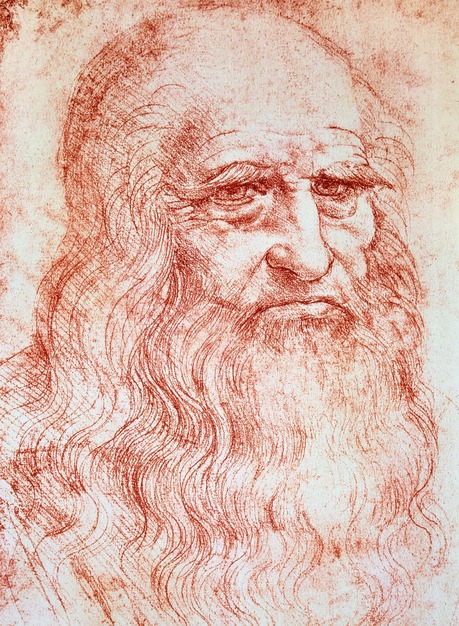 When we think of Leonardo's appearance, the first image that leaps to the memory of everyone is his famous self-portrait dated 1515: a sanguine (pencil type) drawing on paper in which the master shows his face in a semi-frontal position, white-haired and with long hair flowing down softly from the bald forehead, masterfully represented with very few lines, which come together in a whole with the beard so long. It is the face of an adult Leonardo, an important nose, thick eyebrows and a serious and severe expression. This famous self-portrait is included in the Royal Museums of Turin. With Reborn Leonardo today in Palazzo Zaguri that self-portrait takes on new life thanks to the technique of cloning. The result is a surprising document that approaches the master's original in a rigorous and scientific manner and allows us to see the self-portrait front and back in all its nuances, in every line. It will also be possible to read the letters and figures reported by the artist in the lower right corner.

Also in this case the process was made possible thanks to the collaboration of prominent professionals with the city of Turin and Veneto region in the forefront. The project, in fact, was conceived by the art historian and Egyptologist Dr. Donatella Avanzo, and carried out by the director of the Royal Museums of Turin Dr. Enrica Pagella. The original file was then processed in digital form by the paduan Graphic Report company of Conselve, and finally came to life in the hands of Fernando Masone, one of the last paper artisans left in Italy who, with a precious medieval technique , reported the file on handmade paper.

The reproduction n.0 was donated by Palazzo Zaguri to the Royal Museums of Turin, while the second is an integral part of the exhibition Authentic Human Bodies. Leonardo da Vinci: visiting the exhibition is to know not only the artist but also the Leonardo man.

The extraordinary Russian artist Vasily Klyukin also pays tribute to Leonardo' s genius at Palazzo Zaguri with his work Genius Library. A young eclectic Muscovite artist, he is a sculptor, designer and architect, whose works are on show in the most artistically fervent city. His humanitarian commitment is also great, supporting amFAR, a foundation that deals with AIDS research.

Since 2016, thanks to his engineering studies, he has been working on the technique of live sculptures: it is a technique which allows to interlock steel or copper plates without any fixing element, giving life to a three-dimensionality that remains flexible, like if the plates were pages of a book that every visitor can browse in his own way. And it is with this technique that the artist lands in Venice with the exhibition "In Dante Veritas", on exposition at the Arsenale for the 2019 Art Biennale, and with "Genius Library", his homage to the master da Vinci exposed to Zaguri Palace. With this work of extraordinary effect he gives dimension to the face of the master with mirrored copper plates, on each of which a drawing has been engraved, all chosen among the most beautiful of Leonardo: "the library of genius", the works imprinted in the mind of the Florentine genius before they could see the light and become the artistic heritage of humanity. A singular work of great visual and emotional impact, which will allow the visitor to enter the mind of the greatest Leonardo da Vinci.

With this exhibition, Palazzo Zaguri confirms its commitment to spread unique and original cultural projects. Authentic Human Bodies. Leonardo da Vinci is yet another step in this direction: an extraordinary exhibition in its originality, in which Leonardo's drawings, still analyzed today at the anatomy universities, again become a source of artistic and scientific inspiration, and in which genius di Leonardo meets the most modern technology and world-famous contemporary artists who pay homage to his artistic greatness.