San Servolo and the Insane Asylum Museum: laud to madness!

Off the gardens of Sant'Elena, in the tail of the "fish" that is Venice, lying in the calm and shallow waters that herald the Lido, stands San Servolo, one of the oldest islands of the Venetian Lagoon: built as a monastic place, over the centuries it has hosted patients suffering from mental illnesses and today, following careful restoration, it is a quiet and peaceful land, with an architectural complex surrounded by a lush park that make the island one of the most important conference centers of Venice and its surroundings.

But the heart of San Servolo is a rather unique museum...

San Servolo: the island from its origins to the present day There are many legends about the origins of the island of San Servolo: those who want it founded as early as 819, what a kingdom of the Benedictine monks, and those dedicated to the cult of St. Christopher with its chapel.

But it seems quite certain that since the ninth century San Servolo hosted a monastery built by the Fianco family and Galbaio familiy, very well known because it had given 2 doges to the Republic. And it is to them that historians date the dedication to Saint Servolo, to whom an ancient castle in Koper was dedicated, of which they were originally from.

Later the monks of the monastery, with the help of the Doge Angelo Partecipazio, moved inland to Sant'Ilario to be precise, due to the small size of the structure, no longer suitable for the number of dwellers. But the island was certainly not abandoned, as its position was considered rather strategic, since from its waters you could reach Rialto, the economic heart of the Republic.

The monastery was therefore kept alive and in 1109 it became the home of the Benedictine nuns who remained there until 1615 when, due to the excessive deterioration of the buildings, they were moved to Venice. As a result of this transfer the premises became first grain stores and then were used as a shelter for the sick of the plague.

We are in the first decade of the eighteenth century when, instead, the monastery was transformed into a military hospital and after a few years had the function that would mark the island for years to come: patients with mental illness were hospitalized there. It was then Napoleon, during the Austrian domination at the end of the 18th century, who ordered the hospitalization of the mentally ill of all classes in San Servolo, with a secular management of the structure. After a year, in 1798, he declared the hospital the Centrale Insane Asylum of Veneto, Dalmatia and Tyrol, but managed by the Hospitaller Order of St. John of God. With the unification of the Kingdom of Italy in 1866 the management of the madhouse passed to the Province of Venice, which in 1932 "elevated" it to a psychiatric hospital.

This hospital also saw the passage of illustrious patients: even Benito Mussolini had his wife Ida Dalser imprisoned there in order to marry the new woman, Rachele Guidi.

The psychiatric hospital of San Servolo was definitively closed with the Basaglia Law of 1978, a fate that affected all the asylums of the national territory. From this date, the Province of Venice undertook a process of recovery and restoration of the island and its structures, together with an interesting multicultural promotion project.

Today San Servolo is an island of art, design and culture, with its magnificent structures immersed in the greenery of an uncontaminated park, which every year host hundreds of events including courses, congresses, art exhibitions.

Among the jewels of the island's past is undoubtedly the Church dedicated to Saint Servolo: originally built in 1759, it was completed after a few years. Small in size, intimate and fascinating in its extreme simplicity, the building was built according to a central plan that continues with the presbytery and ends with the apse. The exterior, on the other hand, has the most characteristic elements, at least rather detached from the lagoon area: the façade, in fact, is characterized by a portico with tall, slender columns supporting arches in the centre. These voids are well balanced by the upper order, all full, which is lightened only by regular openings, perfectly aligned with those below. It closes the whole sloping roof interrupted by the most scenic element, and also innovated for Venice, that is the loggia with its openwork balustrade decorated with busts and cherubs: it is a "modern" integration, dating back to the interventions of the Nineteenth century that greatly altered the church. In the rear part of the church, the closing tympanum is raised, surrounded by two bell towers placed as high sentinels to guard the church and the whole island.

Beyond the church, the island is home to the Franca and Franco Basaglia Foundation, the Venice International University, and a few years ago also a branch of the Academy of Fine Arts, while the historic complex houses a large Congress Centre, the largest in Venice, with an adjoining Living Room and Study Centre for conference delegates.

All the buildings that populate the island are immersed in a green and luxuriant park, one of the largest in the whole of Venice. Wide expanses of Italian-style gardens that are home to very ancient trees and tree species from far away, such as the Canary Island palm, American agave plants, European lime, Aleppo pines and centuries-old olive trees.

But the main attraction of this enchanting place is undoubtedly the Insane Asylum Museum... 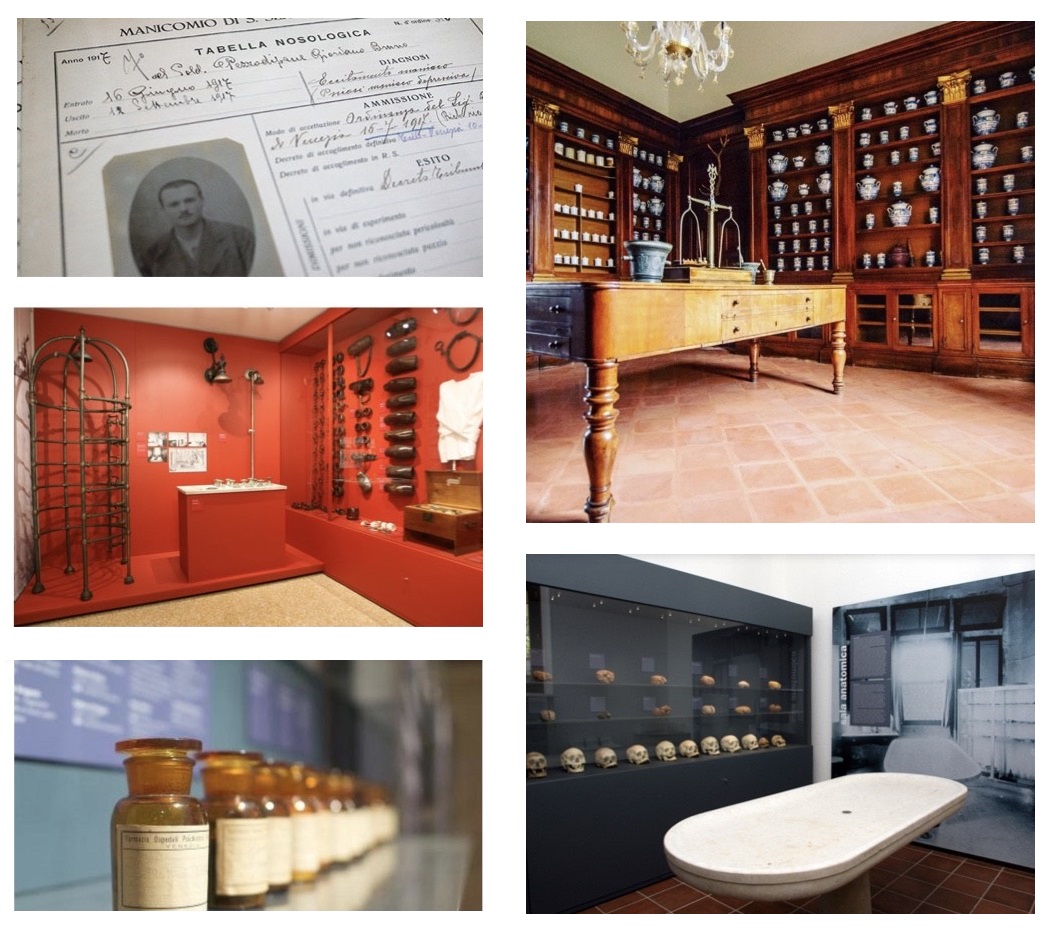 The "Museum of the Insane Asylum - Madness Locked Away" was inaugurated in 2006 and tells in a simple and clear way the approach of medicine to mental illness through the centuries. The exhibits on display belonged to the psychiatric hospital, which has been active for more than two hundred years, and are intended to show the visitor what the condition of the patients locked up in the facility was: marginalisation and social exclusion, as well as physical segregation and isolation. Practices that were widespread a little bit everywhere, since medicine was confronted for the first time with this type of pathologies. A place, therefore, that has witnessed so much pain, certainly of terrible episodes, but that has however strongly characterized the island.

The exhibition shows documents and testimonies that reconstruct the life of the structure throughout its long history: medical records, registers, but also photos and prints. There is no lack of physical restraint instruments, such as handcuffs, ankle locks and sleeves, which perfectly convey the terrible stasis conditions of the patients: physical containment was widespread especially for the most serious patients, those who were so aggressive and at risk of suicide, for whom this practice was the only way to keep their unpredictable behaviour at bay. Very strong emotionally is the exposure of clinical instrumentation, such as electroshock used for rather questionable "therapeutic" purposes: developed in the 1930s by Italian neurologists, it has always been a much debated technique, because this passage of electric current in the brain did not always lead to serious improvements of the patient.

Not just the darkness of madness in San Servolo insane asylum. A splendid grand piano, on the other hand, bears witness to a hint of music therapy, while paintings and objects tell of the patients' daily lives and how they were able to create handmade artefacts: a sort of ray of light amidst the oxen of the blindest pain.

The Museum also houses a magnificent 18th century pharmacy: an immense wooden structure in solid walnut that contains an incredible collection of herbal and pharmaceutical ceramic vases, all imprinted with the effigy of the Winged Lion of St. Mark, because they were donated by the Republic of Venice to the hospital as thanks and praise for the excellent work done.

The Anatomical Room displays its collection of 11 skulls and 12 brains, all preserved with the plastination method, a technique perfected in Germans in the nineties and which allows, thanks to the elimination of liquids, the preservation of human bodies by making them rigid, odourless and even preserving their natural colour. In the center an anatomical table with all its original instrumentation from the late nineteenth century.

The Museum of the Insane Asylum represents an incredible opportunity to discover and retrace the history of a piece of Venice and of Italy as a whole, fundamental to know and contextualize a page of delicate and often disputed modern medicine, to come into contact with a pathology that has struggled to be considered such, and to learn about progress and errors in treatment methods that too often took away the dignity of those who suffered from this pathology, in spite of themselves.

The Museum of the San Servolo Insane Asylum following the provisions regarding the containment of the Covid-19 is open only on Saturdays and Sundays from 10:00 to 17:00, until a date to be defined.

To get to San Servolo, use the ACTV navigation service Line 20 from San Zaccaria "B".