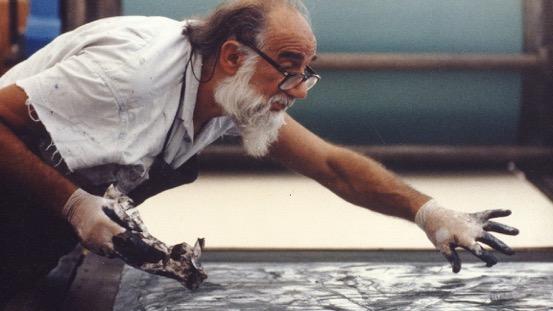 A violent, ferocious, but also material painting that combines a painting of action with a painting made of "signs". To put it bluntly, the work of Emilio Vedova, unique in the Italian panorama of the time, had some elements in common with the action painting of the American Jackson Pollock, but combined with total improvisation "the sign" also repeated, constructed and then destroyed by the power of his physical gestures in contact with the canvas. We must consider Vedova as one of the Italian artists who restore dignity and notoriety to Venetian painting, in the wake of the masters of the past such as Titian, Giorgione, Guardi, Tintoretto, Tiepolo and many others.

The Emilio and Annabianca Vedova Foundation: the story of avant-garde painting in the postwar period

The Emilio e Annabianca Vedova Foundation, founded by the painter and his wife, was born with the necessary aim of enhancing the artistic experiences of the time, focusing its attention on the study and research around the works of Emilio Vedova and his figure, paying attention to all the languages of art that animated the second half of the twentieth century. The work currently carried out by the Foundation is very varied, ranging from study and research, to the analysis of the works, promotion and exhibition, also organizing educational workshops, conferences, scholarships and awards. All this amount of work follows irremovably the will of the artist who saw in the conservation, protection and subsequent dissemination of his work a single initiative that could not be disjoined, in order to be able to tell the best of those extraordinary paths of the avant-garde painting in Italy.

The 1950s began and the languages of abstraction and the informal, in the sense of "shapeless", imposed themselves more and more on the international art scene, attracting to Italy a series of young artists who would in turn meet in multiple "action" groups. Vedova, on the other hand, took an active part for only one year, between 1952 and 1953, in the activities of one of these, the so-called Group of Eight, which further sharpened the irremediable split between figurative and informal artists. Together with him also worked Afro Basaldella, Renato Birolli, Antonio Corpora, Mattia Moreni, Ennio Morlotti, Giuseppe Santomaso and Giulio Turcato, all great anti-figurative masters, internationally recognized.

Beyond this experience, we can recognize in Emilio Vedova a figure of difficult position, who very often moved in a solitary manner and far from the vicissitudes of the art world. Also for this reason it is easy to understand why he chose to continue living in his beloved Venice, far from the artistic centres that Europe and Italy itself offered. An indissoluble bond with the city and its art history, and that despite the abrupt cut to tradition, saw in Vedova a scholar and discoverer of the past, who was treated with the right weight and respect.

The exhibition spaces of the Foundation: the Vedova Space

The Foundation carries out all its activities in two exhibition venues, both in the Dorsoduro district: the Vedova Space and the Sale docks.

The Vedova Space is the last atelier where the maestro worked, on the Fondamenta Zattere, not too far from the Basilica of Santa Maria della Salute. In this great "cavern" of his you can still perceive the atmosphere of symbiosis with the place, which became practically his home as well as the place where he produced most of his work since the 70s.

It is an ancient squero (place where boats were made) of the 16th century, a long and curved space with its high and slanting walls, which welcomes the light from above coming from large skylights. A characteristic feature of this space are the magnificent wooden trusses that support the roof, "almost as if to help and hold together that all-Venetian sense of precarious furniture so present in many of Vedova's works".

And this apparently immobile place is made dynamic and alive by the master's passage, and is transformed into a vibrant laboratory where incredible relationships between ideas and works, between art and life, between utopia and reality are born: an eye on the Lagoon and the world.

The master intensely loved this space, and lived it with great passion, renewing in it his personal artistic experience, finding every day the concentration necessary for art. It is here that the great cycles of works such as Plurimi Binari, Dischi, Tondi, Oltre, Carnevali, Continuum are born.

In recent years, thanks to the intervention of his friend Renzo Piano, an architect with an international appeal, the space has been renewed while maintaining its strictly Venetian character and above all leaving the spirit of Vedova unchanged: thus an important archive was born, which will allow the study, conservation and restoration of the master's works, and a very flexible central area, which will be the stage for exhibitions, conferences and debates.

The exhibition spaces of the Foundation: the Salt Warehouses To the Salt Warehouses instead, are linked different artistic and human experiences of Vedova: in one of the nine warehouses, in fact, there was the large studio where he used to gather and animate the whole Venetian art scene, and not only.

We are talking about a place of secular importance for the city, built almost certainly in the first half of the fifteenth century, given its presence in the famous map of Venice by the painter Jacopo de' Barbari. The large building was located in a place where it was easily possible to dock rafts or other boats that distributed the goods that entered the city: in front of the Giudecca Canal . It was later that in those very spaces it was decided to develop a storehouse for salt, one of the most important products for the economy of the Serenissima, necessary for the preservation of food reserves. The exceptional warehouse was restored at the beginning of the nineteenth century by Alvise Pigazzi and was abandoned during the twentieth century, where it went through a period of decline. In 1973 the municipality of Venice even decided to demolish this ancient building to build swimming pools. The demolition works began and it was the painter himself who started a great protest intervention in defence of that "remote" architecture which in the meantime had become an incubator of contemporary art, culture and avant-garde painting. Although he managed to block the project, the works irreparably damaged the attics and some internal walls.

Emilio and Annabianca responded to this desire of the City of Venice to erase the Magazzini del Sale from the profile of Venice with a silent but powerful protest: at the head of a parade in which students, intellectuals, artists and supporters of the preservation of the good participated in silence at a meeting of a City Council, putting on display a huge press of the plant of Jacopo dè Barbari. That episode was the turning point for the Magazzini and for Venice.

The Magazzini were safe. It was now necessary to give them a new life, and for this reason the Vedova couple called a friend, the architect par excellence, Renzo Piano.

The Genoese architect carried out a conservative restoration, preserving the original structure and soul of that space: a difficult job, given the size of the hall, which is irregular and asymmetrical, over 70 meters long, 9 meters wide and 8 meters high. The space created, the Vedova Foundation is a place dedicated entirely to the works of the master and wants to enhance the relationship that he had with this site.

The project had 3 main elements: the entrance area, the exhibition space and the way the works were displayed.

The entrance is characterized by two large asymmetrical walls that diverge from each other, and is completely covered, from the walls to the floor, with larch wood slats: it welcomes visitors and seems to envelop them in the warm embrace of Emilio Vedova. This area also contains all the services

From here you access the exhibition spaces, where Piano has kept the red brick walls and the original wooden trusses that support the roof. The only intervention was to lay a light wooden deck on the original masegni to give more strength to the perspective perception of the hall. Under this deck were placed all the systems that use renewable energy sources, for an eco-sustainable consumption: geothermal probes are able to provide an air conditioning without waste, and a computerized control of electricity, in order to promote the least possible waste.

But the peculiarity of this space lies in the way Vedova's works are displayed: Renzo Piano has designed a robotic system that always manages to change the display by changing the arrangement of the works. It is a long track that, hooked to the roof trusses, runs through the hall from side to side. On this track are hooked mobile and extendable arms that support the works, enclosed in metal structures. These are all stored in the final part of the hall and if necessary are moved to the space accessible to visitors, are placed in precise points and at specific heights, so that you have the greatest and best enjoyment of them. A macro file that becomes a real scenic machine, which, like on the stage of a theatre, allows a continuous change of the "scenography", letting the master's works be unveiled slowly, allowing visitors to move freely among them.

It is true, it is a real technological devilry, but you will see that it is a simple installation and above all respectful of the place that hosts it and the structure that supports it.