The 5 most peculiar bridges in Venice

The historic centre of Venice is made up of 121 small islands joined together by more than 400 bridges. The best known bridges are the four that cross the Grand Canal, namely the Rialto Bridge, the Accademia Bridge, the Scalzi Bridge and the Constitution Bridge, but today we are going to discover the five most peculiar bridges in Venice, whose peculiarity lies in the legends linked to their history or in their architectural structure. From the only bridge that has remained without a parapet in the city to one of the most romantic bridges due to its history... 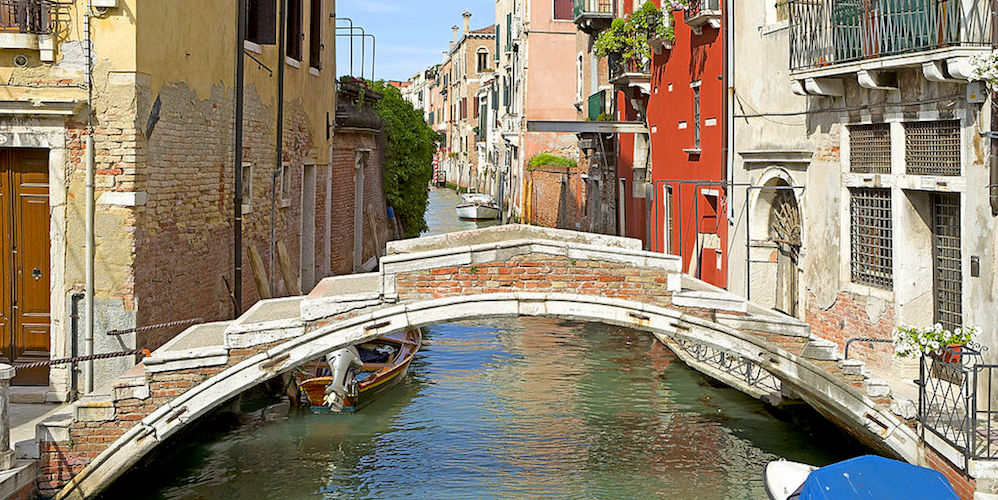 Along Fondamenta San Felice, in the Cannaregio district, it is possible to come across a rather unusual sight: a bridge without a parapet. The bridge in question is Ponte Chiodo (Chiodo Bridge), a bridge that belonged to the Chiodo family and still remains a private bridge, as it leads to the doors of some houses. Made of stones and bricks, it is the only surviving example in Venice of a bridge without balustrades. However, on the island of Torcello, one of the islands of the Venetian lagoon, there is another bridge with the same particular characteristic and also with a very unusual name, Ponte del Diavolo (Devil's Bridge). 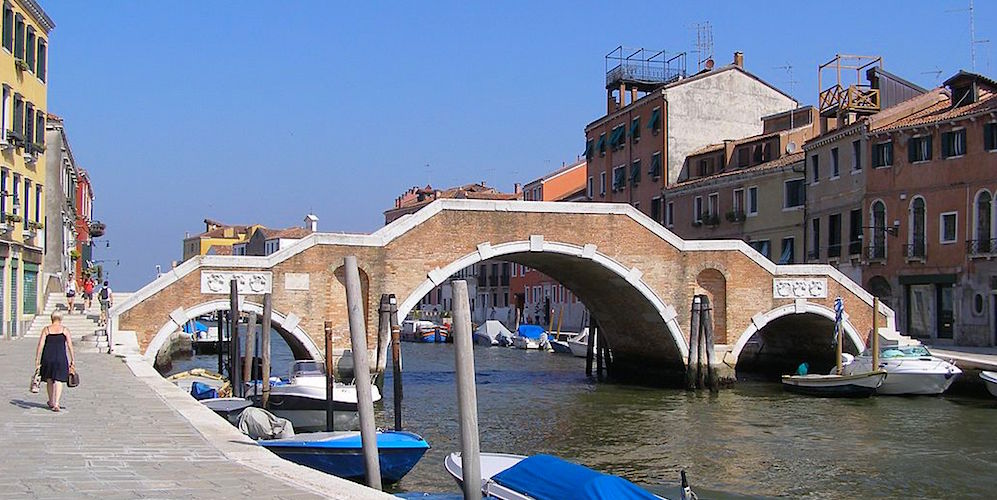 Ponte dei Tre Archi (Three Arches Bridge), on the Cannaregio canal, is characterised by a structure with three arches, two small lateral ones and a large central one, and it is the only example of a three-arch bridge in the city. Due to its uniqueness, it has been named Three Arches Bridge, although its original name was Ponte di San Giobbe. This bridge was originally made of wood, but was then built of stone in 1503 and in 1688 took its current form. The Three Arches Bridge is definitely a special destination to include in your Venetian itinerary, in order to add a unique glimpse to your visit. 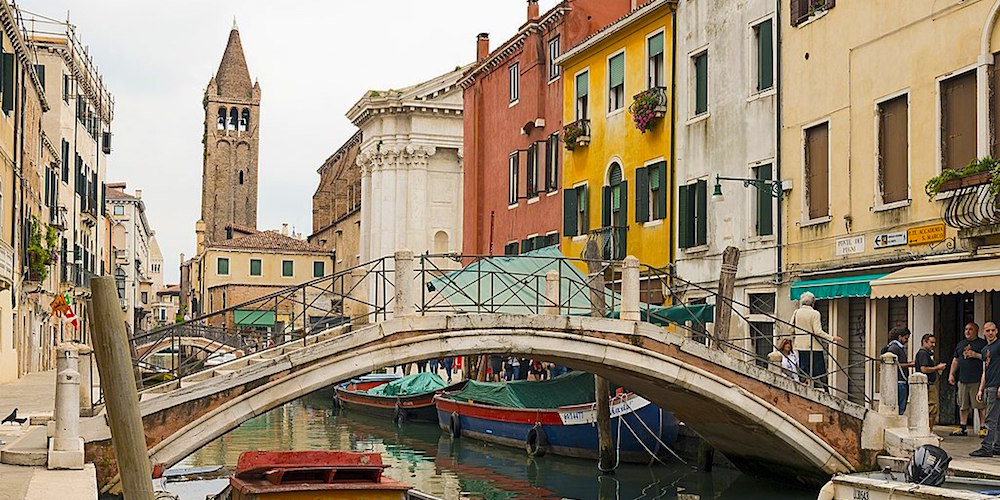 In the Dorsoduro district we find Ponte dei Pugni (Bridge of Punches), a stone bridge with iron balustrades with oblique crosses. The peculiarity of this bridge are the four footprints in Istrian stone visible on its central summit, in memory of the ancient Venetian tradition: Guerra dei Pugni (War of Fists). In ancient times Venice was divided into two factions, the Castellani, who lived in the eastern part of the city, and the Nicoletti, who lived in the western part, and who used to have fist fights against each other on the bridges of the city from September to December. The aim of the fight was to throw the opponents into the canal below, and the winner was the team that managed to keep its men on the bridge. Ponte dei Pugni, originally Ponte di Santa Barbara (St Barbara's Bridge), was renamed so because it was the favourite bridge for these challenges. In 1705, however, following an excessively bloody fight that switched from punches to knives, the War of Fists was banned. 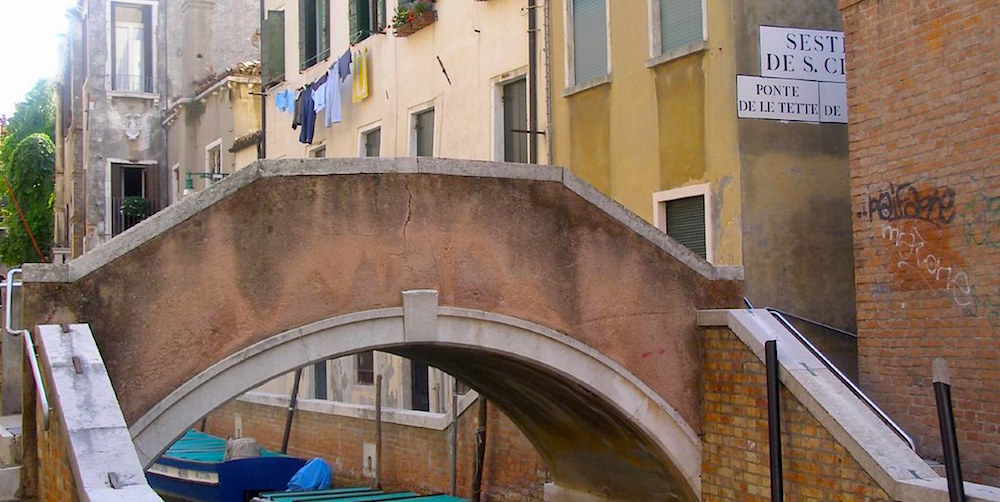 Between the Santa Croce disctrict and the San Polo one there is a bridge with a very peculiar name: Ponte delle Tette (Bridge of the Tits). The bridge was located in a district characterised by the presence of numerous brothels and from their balconies the prostitutes used to expose their uncovered breasts to attract customers. According to the historian Tassini, this custom may have been imposed on prostitutes by a law enacted by the Serenissima government to limit the spread of homosexuality, which was already widespread among Venetian men at the time. 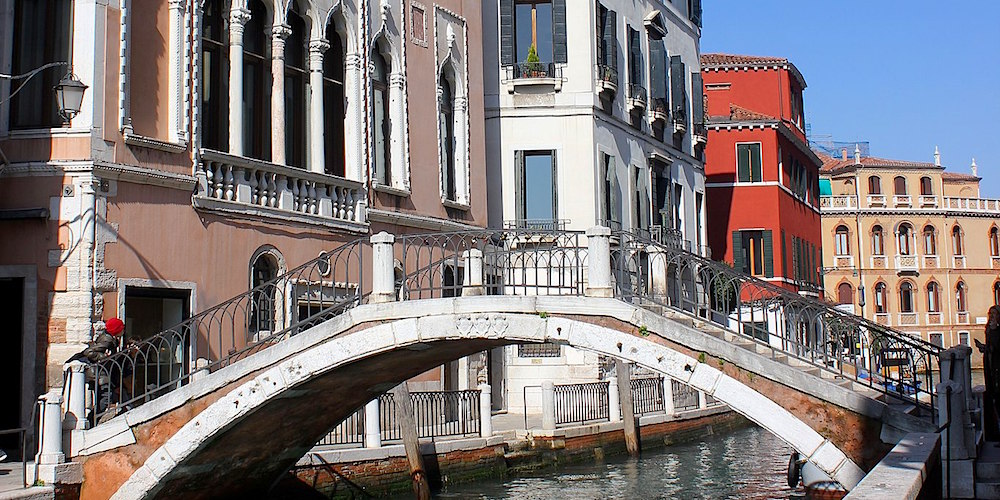 In the Dorsoduro district we find Ponte delle Maravegie (Bridge of Wonders) to which two beautiful popular legends are attributed. According to the first legend, the name of the bridge derives from the fact that it was wonderfully built overnight by unknown hands after the construction materials were placed there that same morning. The second legend tells the romantic story of young Marina and her beloved boatman. According to the legend, a family of seven daughters lived near the bridge, six of them were beautiful and one was ugly. A young boatman began to visit the sisters to court them when he suddenly became so ill that he could no longer do his job. Believing that the illness was the result of the evil eye cast on him by Marina, the uglier sister he never courted, the boatman decided to go to her one evening to take his revenge. When he reached the bridge, however, he saw the girl kneeling at the window praying and seven stars appeared in the sky above her, six bright and one dim. Suddenly, the six stars disappeared and only the seventh star remained, shining brighter and brighter. Thinking that this was a sign linked to his own situation, he went to Marina, who confessed that she was madly in love with him and was praying that she would die in his place. In the end, the young boatman fell in love with her, healed, won the next regatta and married Marina.