The church of San Pantalon: one of the most beautiful ceilings in the world

Not far from the famous campo (square) Santa Margherita, in the sestiere (district) of Dorsoduro of Venice, stands a church that may go unnoticed due to its external simplicity: the Church of San Pantalon. This church characterised by its unfinished façade, however, hides a real artistic treasure inside; it is no coincidence that its ceiling was included by the BBC on its list of the ten most beautiful ceilings in the world.

The church of San Pantalon: its history 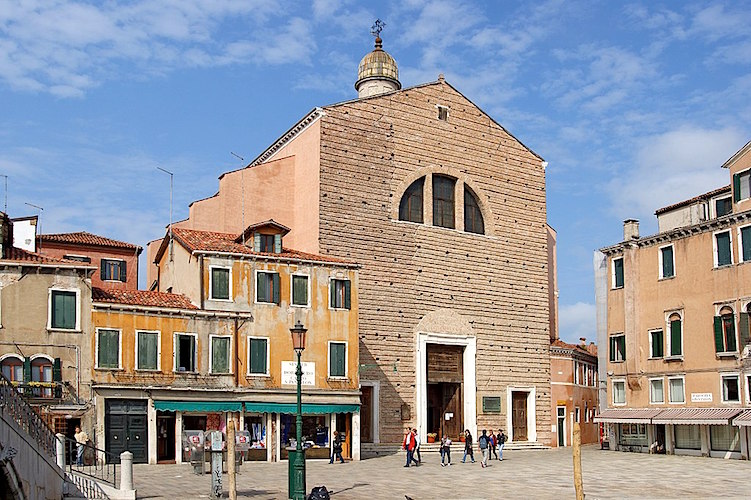 The church of San Pantalon, one of the few churches in Venice to be characterised by an unfinished façade, overlooks the campo of the same name, campo San Pantalon, not far from the better known campo Santa Margherita, in the lively sestiere of Dorsoduro. The church is dedicated to the martyr Saint Pantaleon of Nicomedia, in Venetian dialect San Pantalon, a Christian doctor who lived between the 3rd and 4th centuries AD and was martyred during the Diocletianic Persecution. Saint Pantaleon, which is the patron saint of midwives and co-patron saint of doctors with the famous Cosmas and Damian, is venerated by many Christian Churches and he is part of the group of the so-called anargyroi saints, the name given in the Greek Church to the saints who, according to the tradition, practised medicine free of charge.

There is little information concerning the exact date of foundation and the original appearance of the church, but what is certain is that it must have already existed in 1161, the date of a privilege of Pope Alexander III in which he mentioned the church for the first time. Its current appearance is due to the architect Francesco Comin from Treviso, who rebuilt it in Baroque style between 1668 and 1686. The ninety degree rotation of the longitudinal axis of the nave was certainly a substantial change that made the façade overlook the campo, which until then had overlooked the Rio Mosca. However, the new façade remained unfinished, revealing in this way the brick substructure.

The Church of San Pantalon: the ceiling

The hidden treasure of this church can be admired simply by looking up to the ceiling: what may look like an amazing fresco is actually a huge painting on canvas, precisely 44 canvasses joined together; an astonishing work of prodigious skill that, being large 443 square metres, is considered the largest work of art on canvas in the world.

The painting depicts the Martyrdom and Glory of Saint Pantaleon painted by the Venetian artist Giovanni Antonio Fumiani between 1680 and 1704. The whole work traces the main episodes of the unjust death sentence of the saint by the Roman emperor Galerius Maximianus, depicted on the right side seated on a throne and dressed in red.

Saint Pantaleon is depicted above the main chapel, seated on a throne as the Roman emperor, while the martyrdom scene is depicted on the left side. The most evocative scene is certainly the central one, celebrating the triumph of Saint Pantaleon welcomed in paradise by Christ and a multitude of angels that passes him the crown of glory and the palm of martyrdom.

What makes this work of art truly magnificent was certainly the ability of the painter Fumiani to extend the painting into the actual architectural structure of the church, creating in this way a unique visual illusion.