The costumes of the Carnival of Venice: elegance and opulence

The origins of Venetian Carnival costumes Everyone knows that Venice is unique, but perhaps not everyone knows how unique it is especially on Carnival days.

Every year, for about two weeks, a full program of events and parties pours into Venice thousands of tourists and onlookers: the city is transformed, the atmosphere of calli and campi becomes playful and noisy, while St. Mark's Square becomes the center of the party with a continuous flow of masks and costumes.

There are really something for all tastes, but certainly the ones that capture the most attention are the richest and most elaborate costumes, reminiscent of the glorious splendor of the Serenissima. Precious and sophisticated costumes, made with skill and precision by specialized ateliers, cover bodies that move lightly around the city, enchanting anyone who meets their gaze: like magical creatures, they take us back in time to live even just a few hours in that Venice that is now gone.

But when was the custom of dressing up in a costume during Carnival days born in Venice?

To know, we have to go back in time because the custom dates back many centuries. We are at the beginning of the fifteenth century, when in Venice some groups of young patricians and gentlemen gave life to clubs of entertainment. They were called Compagnie della Calza and their purpose was to organize parties and shows to give joy to the city. The Carnival therefore became the right time to give vent to the imagination and liveliness of these groups, in a period of particular artistic and cultural ferment for the city. It is therefore to them that we owe the introduction of the costume to celebrate the Carnival: it was even obligatory to wear it because those who made a mistake were jokingly punished.

Today, walking through the streets teeming with curious people, those who wear period costumes certainly stand out for their opulence and wealth of details.

How can you not wish you could wear a princely dress at least once in your life!

Do you think it's such a difficult dream to realize? 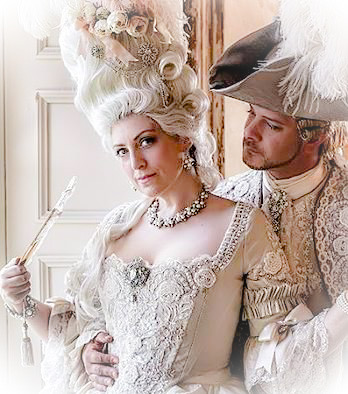 They were clothes of great refinement, which discovered more than cover, making the bodies of the ladies who wore them sensual and irreverent: nothing to do with certain austerities of the time. An extremely elegant fashion that was shown especially during the long period of Carnival.

The women's bodies were squeezed into tight bodices stiffened by whale sticks and the necklines were wide and deep, allowing a glimpse of thriving breasts, while the skirts were sinuously wide thanks to ingenious internal supports. Made with precious fabrics and silks arrived in the Lagoon from the distant lands of the East, they were always enriched with Burano lace, a pride for every woman of the time. At the feet they wore high shoes that could reach 50 centimetres in height, called calcagnini or ciopine, which paid off in elegance because they made the figure slim but put the ladies' balance to the test.

To complete the outfit there were accessories, very important: gloves, handbags and the fan, indispensable for visual communication, especially a weapon of seduction that allowed to hide the eyes or part of the face to hide smiles or disappointment.

Without a doubt, facial make-up and hair styling were also fundamental. The beauty dictates of the time imposed porcelain faces obtained by whitening the skin with white lead-based creams, which gave it not only a diaphanous appearance but also a smooth appearance to the point of hiding any imperfections: a sort of facelift of yesteryear. The cheeks and lips were then given a touch of colour with products made with materials of dubious origin. Each lady completed her personal make-up with a fake mole: it could be made on the outer corner of the lips or eye, or on the mouth or even on the nose, and was considered of great sensuality.

Hair hairstyles, on the other hand, were very baroque: complex structures allowed the creation of very structured hairstyles, voluminous and so high as to compromise the health of the cervical! They were then usually whitened with white powder.

Men were just as flirtatious as women! Real ladies' men! They too wore dresses made of fabrics from the East, such as velvet and damask, and did not disdain embroidery and lace. Their clothing was usually made of a tailcoat, a shirt always white and short trousers tight just below the knees, from which silk stockings came out. The outfit was completed by a headgear and a long black cloak, in silk or wool, called tabarro.

Today, as in the shining eighteenth century Venice, during the days of Carnival the city and St. Mark's Square above all, are filled with splendid figures who stage all the opulence and elegance of their costumes: spending days of fun also means this, being catapulted into another era, baroque and sophisticated, to feel yourself at the court of the Doge.

The possibility to rent a costume: at the court of the Doge for a fairy tale day

Why not experience for a few hours the emotion of feeling like a citizen of the Serenissima, live a day as a nobleman of the eighteenth century and walk around the calli wearing a refined and precious period costume?

Today this is possible thanks to ateliers that rent costumes with period features to make you live Carnival as an unforgettable experience!

But how much does it cost to live a day as a Venetian of the eighteenth century? Well, the cost depends on two fundamental factors: the shape of the costume and the duration of the rental: for about 7 hours the amount of the rental varies between 300 € and 650 €, but the price rises if the costume chosen has special fabrics and finishes.

But if you want a costume that remains yours, then you can choose to have it made to measure for you: the atelier will deliver the costume to the hotel that hosts you, ready to be worn at your event. This option has a very different cost, which can be worth several thousand euros!

Living the Venice Carnival at the height of its festive proposition is something to do at least once in a lifetime. Dive into the calli and breathe the air of the Venice of the past is certainly a unique and unforgettable experience. With the right dress then everything has a special flavor.

However, always remember to respect the few but important rules given by the city to live the best of the chaotic days. Arming yourself with a lot of patience is not enough, you need to cooperate in order and cleanliness to allow those who will arrive the following days to find a Venice always beautiful.