The Carnival of Venice is secular (for its history click here) and the crazy celebrations in the city are very serious!

There are many traditions that accompany this period, some coming from very distant times but which are strongly rooted in our times: because transgression is fine, but never forget your roots. Fortunately, I dare say!

And such a bizarre feast, which sees in fun and lightness its best features, famous in every corner of the world, can only have opulent opening and closing ceremonies that sanction the beginning with the welcome to the Carnival and the end with the goodbye to the New Year.

Start: the Flight of the Angel 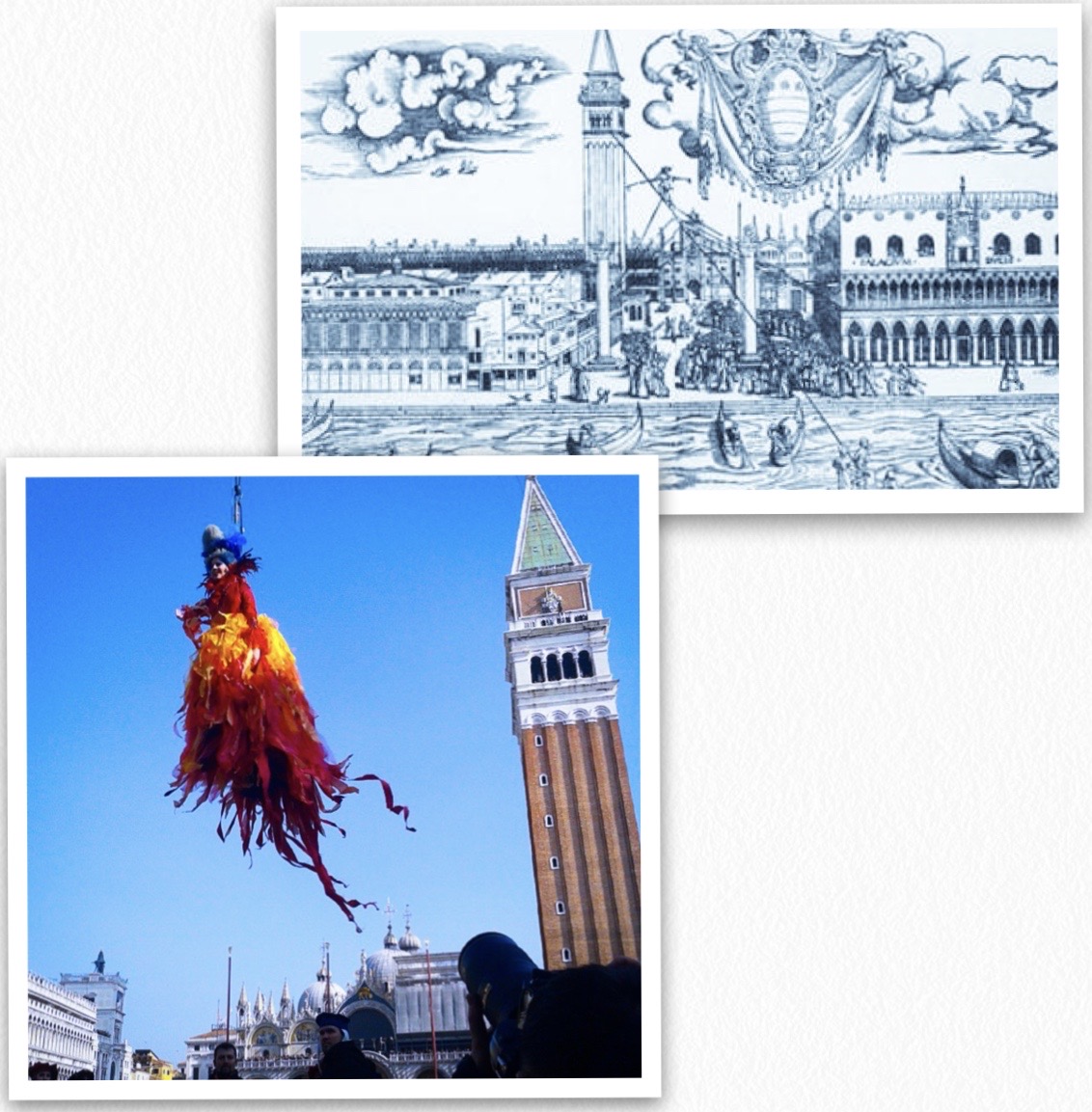 We are in the first half of the sixteenth century when, during the Carnival celebrations, a young Turk performed a really daring feat, under the astonished eyes of the crowd crowd crowded in St. Mark's Square. It was a tightrope walker who, starting from the small square of the two Columns, managed to climb up to the bell cell of the Bell Tower with the only help of a barbell, walking on a rope held in tension by a boat placed in St. Mark's Basin. And that's not all: he went down in the same way until he reached the loggia of the Doge's Palace where he paid his respects to the Doge who was waiting for him.

The crowd went mad at the sight of such mastery and skill, and immediate was the request to repeat the undertaking and to give it a character of continuity, making it a customary ceremony of the period. And so it was: from that day on, the Carnival was inaugurated with what was renamed the "svolo del turco" (flight of turkish) .

For many years the feat, given its very daring nature, was repeated only by professional tightrope walkers, usually Venetians. But later many young people also wanted to try their hand at the performance, to show their courage and to show off their skills under the eyes of the festive city.

Over time, however, the show underwent slight changes: from the eighteenth century the protagonist was hooked with metal rings to a rope and made to descend to the Doge's Palace where he was awaited by the Doge, who rewarded his courage and skill with gifts and a large sum of money. Those angel wings earned the enterprise a new name, svolo dell'angelo (flight of the Angel).

The event lasted until 1759 when, unfortunately, the exhibition ended in tragedy: the rope holding the angel broke and the angel crashed to the ground of the square, losing his life under the dismayed eyes of the citizens, the Doge, the authorities and strangers who came to the city for the occasion. From that moment on, everyone was shaken by what had happened, the acrobat on replaced by a large wooden dove that flew from the bell tower and freed confetti and flowers from the festive crowd. A new name change for the occasion, inaugurating the period of the svolo della colombina (flight of the colombina).

The end of the millenary Republic of the Serenissima also sanctioned the end of the traditional Carnival, which had been suspended for centuries since the nineteenth century.

It was resumed thanks to the will of an association of citizens, the Biennale and the La Fenice theatre in 1979: since then the festival and its traditions are more alive than ever!

For the restoration of the legendary flight of the angel, however, it will be necessary to wait until the new millennium and precisely 2001 when the Carnival was inaugurated again with a renewed flight from the Bell Tower. The name of the angel's flight remained unchanged, but the day changed: no longer Shrove Thursday but the second Sunday of the long festive period. In fact, even the place of "landing" has changed: no longer the loggia of the Doge's Palace but the heart of St. Mark's Square, where, to welcome the angel, on a stage built for the occasion there is the Doge and his court, together with the excited and amazed eyes of the entire crowd rushing to enjoy the show.

From that moment on, many illustrious personalities have impersonated the angel: many faces of the sport, such as the multiple Olympic champion Federica Pellegrini, or the fencer Frida Scarpa, or very bizarre characters such as the singer Coolio or the model Bianca Brandolini D'Adda, the last non-Venetian angel.

Yes, because since 2011 the city has returned to take possession of this ancient event, bringing it back as it should be on a parochial level, rejecting the participation of characters completely detached from Venice, not always aware or at least participative in the history of traditions. To fly from the bell tower, therefore, is the winner of the competition of the Maries of the previous year, another tradition that has its roots in the glorious history of the Serenissima (here): all young, beautiful, prepared and especially Venetian!

This year's angel will be Linda Pani, elected Marie during the Carnival of 2019: nineteen years old from Mogliano Veneto, she fascinated the jury with the words "Venetian is not only who lives inside Venice, but who Venice has inside it".

And how can I blame her? If the Carnival is inaugurated with a "top-down" show, it's a "bottom-up" rite!

The goodbye to the Carnival for the next year in Venice starts with the flight of the Lion, a rite that pays homage to the city, its history, its traditions and its most representative symbol: the Lion of St. Mark.

The ceremony, felt with great emotion by the Venetians, involves the raising of the banner of Venice, in red silk on which is imprinted the golden image of the Lion, which from the center of a crowded St. Mark's Square, walking almost 90 meters, reaches the bell cell of the Bell Tower, accompanied by the notes of the hymn of St. Mark sung by musicians of the Fenice Bassoperà.

It is with this ritual that the Carnival pays its homage to the city and its historical emblem, and the city bid farewell to the Carnival with a sumptuous and heartfelt goodbye to next year.

PLEASE NOTE: Both events involve a large influx of spectators in a space with a rather small holding capacity, and for a short time. It is advisable, for all those who want to participate in the events, to reach the Square or the nearby places, such as the Piazzette di San Marco and the Leoncini, well in advance, in order to settle in an orderly manner, without creating inconvenience. And with the same order it is recommended to drain at the end of the shows, to allow other spectators to access the Piazza.

For the handicapped or those with reduced mobility, it is not recommended to reach the most crowded areas. Please note that for the occasion the City Council for safety reasons could set up single ways or other changes to the pedestrian road system.