The Fondaco dei Tedeschi: a single function as a bridge between past and present

Those who visit Venice cannot but notice the osmotic relationship that the City and its inhabitants live with the element water. This relationship draws its origins not only from an evident physical conformation, but also from a deep-rooted history that has made this place one of the most important naval and mercantile powers in the world. The continuous comings and goings of merchants from both the West and the East made the city's canals particularly lively and crowded.

At the time of the Serenissima, buildings were built to house this large number of foreigners, which took on the dual function of a warehouse for goods and a hotel. Each of these structures was assigned to a specific community in order to guarantee greater control and security, preventing any social unrest linked to the cultural differences that characterized them.

In these buildings, which were called fondachi by the Arabic term funduq (house-warehouse), there were several rules that foreigners absolutely had to respect,  and among these there were certainly the following provisions: "no weapons, no games, no prostitutes. Otherwise free to trade".

As we said before, each fondaco was assigned to a community and the main ones in Venice were the Moors, the Germans and the Greeks.

With this article I would like to take you to Fondaco dei Tedeschi. 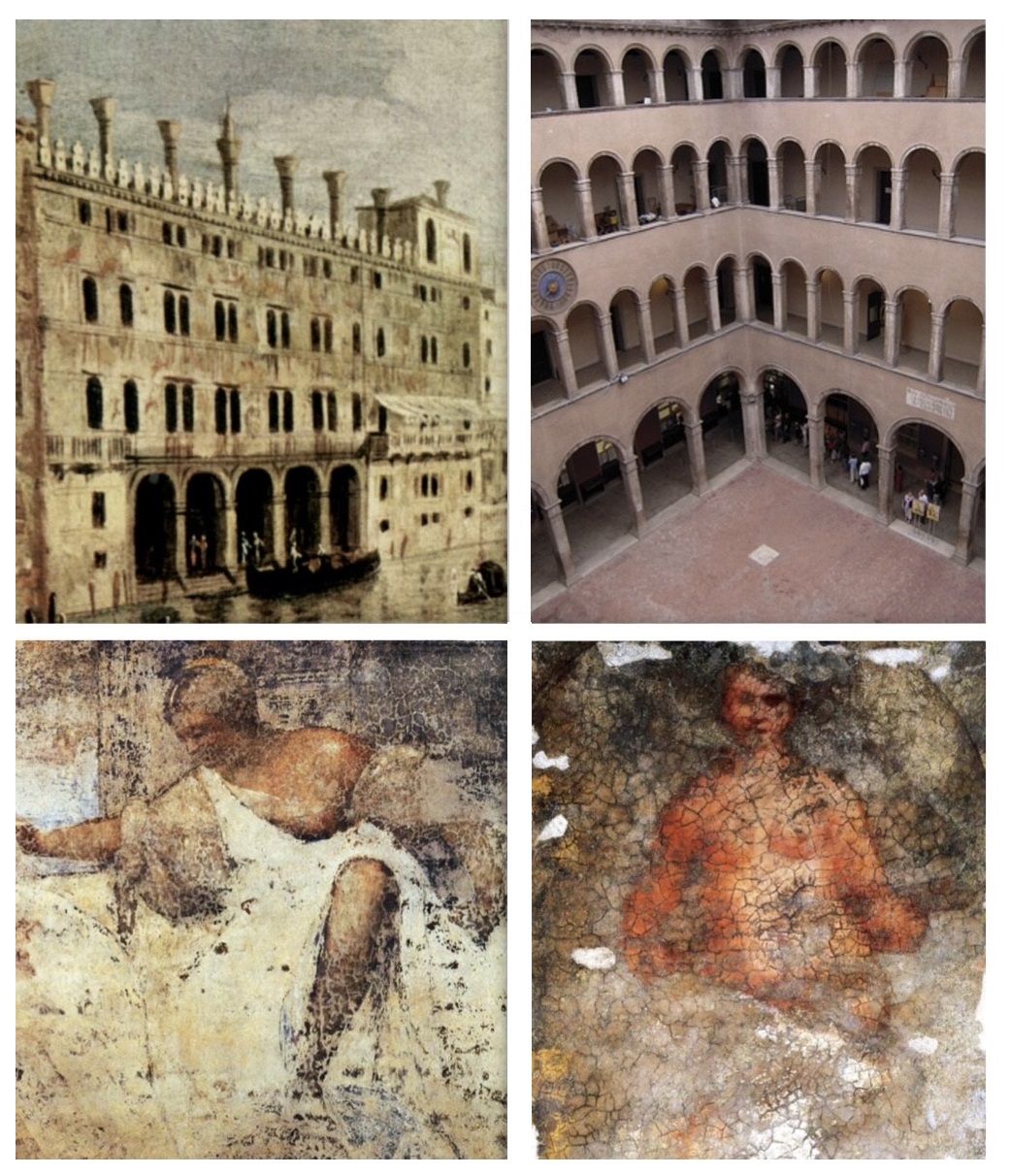 The building is located in a strategic position on the Grand Canal, next to the Rialto Bridge, the beating heart of commercial activities of the Serenissma, The Fondaco of Tedeschi is still today a testimony of the centrality that the Germanic community had for the Republic. In fact, among the communities it was the largest and included not only Germans, as we would think from the name, but all the merchants from Northern Europe, and all those who speak the German language

Its foundation dates back to 1228 and was designed in such a way as to allow goods to be stored and traded on the ground floor and to lodge and eat on the upper floors where there were about 200 rooms. Guests could also perform their religious services in the Church of St. Bartholomew, located a short distance.

Despite its main commercial function, the Fondaco dei Tedeschi (Fontego for us Venetians) was the scene of several processions of the clergy of St. Bartholomew, precisely, on the night of Christmas Eve and on the last day of the year, as well as, between 1500 and 1600, of great festivities in the days before the beginning of the carnival.

On the night between 27 and 28 January 1505 a fire completely devastated the Palace which, at the behest of the then Doge Loredan, was quickly rebuilt in just three years! The attribution of the design of the new project was the subject of several studies that initially wanted it by Pietro Lomabardo . However, today, following the finding of new information, we can say that in all probability the work was realized on a project by Giorgio Spavento and Scarpagnino, who also availed themselves of the advice of Girolamo Tedesco.

What made the new fondaco more imposing and representative than before were the frescoes by two great artists of the time: Giorgione and Titian who frescoed the facade facing the Grand Canal and the side facades respectively, and were to represent, at the behest of the client, with allegorical figures the greatness and power of the Republic at a time when it was engaged in the war against Maximilian I of Hapsburg, who claimed sovereignty in Veneto and Lombardy.

Unfortunately, many of these frescoes have been lost. We can, however, have the privilege to admire La Nuda of Giorgione and La Giustizia of Titian.

A curiosity: it seems that there was bad blood between the two artists precisely because of Titian's work! The chronicles of the time say that the fresco in question was executed in such a masterly manner as to seem the work of Maestro Giorgione, who did not like this comparison very much.

In 1797, with the fall of the Serenissima Republic and the arrival of Napoleon, the Fondaco of Germans, like all the others, was suppressed.

A very charming and sumptuous place to pay the bills, no? Waiting in line was just a pleasure! In 2008 the Benetton group bought the Fondaco from the City for 53 million euros and rented it to the luxury group LVMH, which invested a large sum of capital equal to 40 million euros for a new renovation of the building, which had been lying for many years, too many, in an unpleasant and cruel state of abandonment. The OMA studio of the Dutch archistar Rem Koolhaas was chosen for the restoration work, with the collaboration of Ippolito Pestelli Laparelli and Silvia Sandor.

But what was the function of giving such an imposing building that carried the weight of a glorious past? the choice fell on a "return to the origins", with a commercial destination capable of dialoguing with the contemporary world, using a language that was both Venetian and international: this is how the T-Fondaco dei Tedeschi, where T means travel, born, where T stands for travel, an immense luxury department store dedicated to the Venetians and their traditional craftsmanship, Mady in Italy and the international clientele that daily crowds the city.

As always happens in Venice, the insertion of a new and modern element in such a structured fabric always creates an earthquake whose effects propagate like waves for a very long time. The idea of function, only apparently detached from the Venetian environment, the hypothesis of a restoration that would adapt the ancient building to contemporary needs, created bad moods and controversy, an unstoppable river of words and ink. But was it better to let the palace devour the degradation and neglect?

The result of the restoration by the architect Koolhaas is a balanced palace that on the one hand has been able to preserve its roots and its structure, without too many upheavals of any kind, and on the other hand has managed to wear the splendid dress of modernity.

Seen, ancient and present can dialogue beautifully if put into wise hands!

But let's see the palace: at the time of the restoration this one had a rather regular planimetric layout, with the main facade overlooking the Grand Canal simple and without frills, enlivened only by the 5 arches of the ground floor that invite to the entrance. Inside the 3 floors consisting of beautiful loggias are wrapped around a large courtyard in the center of which triumphs a real well.

Today it is still so!

As for the external part of the building, the original structure remains completely unchanged for obvious reasons of preservation of the historical monument. The innovative element that we can find is the use of brass for the windows and doors: this choice was dictated by conservative needs and the characteristic of this material to darken with oxidation, giving a very harmonious appearance with the entire building.

The main façade on the Grand Canal is still composed of the ground floor portico with its five round arches. The second level is marked, instead, by the alternation of small mullioned windows and single lancet windows that in turn find a symmetrical correspondence with the square windows on the two upper levels. Of the original structure is missing, due to previous interventions, the two towers on either side of the facade. The roof, finally, is embellished with a beautiful battlements, which wants to give momentum to the entire building.

The interior is the one that has undergone the most changes, changes that have followed the precise purpose of making the Fondaco dei Tedeschi as much as possible usable by a contemporary user, while maintaining a red line with the original structure. A very ambitious challenge that has aroused the greatest perplexity and controversy.

But what was the thinking that the OMA studio followed in transforming the building into a luxury shopping mall?

First of all, we proceeded with a lightening of the space through the elimination of some walls and a part of the floors that allowed the insertion of an elevator for the vertical connection. This made it possible to bring to light ancient structural and decorative elements that have contributed to give the building a newfound authenticity: the internal walls of the elevators are made of glass and allow a close view of the ancient masonry. Some of the new openings have been designed and studied according to modern forms, thus creating an evocative game between ancient and modern, with the intention of creating always different points of view. The flooring of the inner courtyard, which was originally in terracotta, has been replaced by a new one in Istrian stone and red marble with a geometric pattern that gives it dynamism and modernity: a clear embroidery to the precious floors that embellished the palaces of the Serenissima. The vera da pozzo (well) has been moved from its original central position to the sides of the court. Innovative elements are also found in the use in the upper galleries, whose back walls have been affected by semi-elliptical shaped cuts that open to new perspectives and views.

The entire layout is made less static through the intersection of escalators marked by a bright red and an external wooden cladding, which contrast with the cladding materials of the walls that take their cue from the traditional Venetian palace, thus creating a very special effect of contrast. The inclusion of these staircases, the most discussed element of the entire intervention, not only have a practical function of connection, but were conceived by the architect as a means from which to enjoy the splendid architecture as a whole from different points of view.

Finally, the last intervention involved the closing level: a roof made of steel and glass replaced the original skylight and was raised by about 1.5 meters allowing the creation of a fourth level, whose glass and steel flooring is "suspended" over the central courtyard. Thus was born a new "glass pavilion", a tribute to the craftsmanship of Murano, which has been attributed a cultural function in which light exhibitions and events.

From this pavilion, you can access what is the absolutely innovative element of this new Fondaco: the 360° Panoramic Terrace from which you can enjoy a breathtaking view of the whole of Venice, homage to the altane (suspended terraces) that soar over the roofs of his homes. 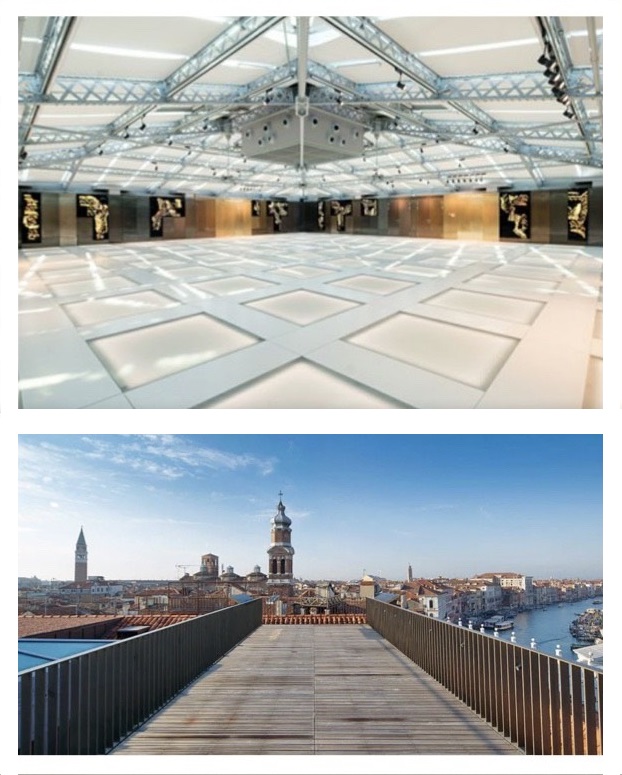 The T-Fondaco dei Tedeschi, born amidst a thousand controversies, seemed to be a foreigner in the Lagoon, but instead it is a triumph of Venetian and Mady in Italy, frequented by citizens and foreigners and where about 500 young Venetians and Venetians have found work.

We can say that it is a very successful intervention!

Concrete, wood, steel, rough walls alternate throughout the structure making it a unique experience, almost tactile, that allows you to live simultaneously the past and the present.

Useful info for the visit

The structure has free access, regardless of whether you want to go shopping or not. Access to the panoramic terrace is regulated by a mandatory online booking service.