The Historical Regatta: in the Grand Canal the ancient Venetian navy between races and historical re

The Historical Regatta is an ancient event that brings the ancient boats of the glorious past of Venice to the Grand Canal each year the first Sunday of September, including passionate competitions and historical re-enactments.

"The boat is home": for a city born on water, boats have always been indispensable means of survival, since it was with these that transport, communications and exchanges were carried out and from which depended the wellness of a city that had as a principle "cultivating the sea and leaving the land alone". Today, as then, the same importance is apllied on water vehicles.

But the lagoon environment is not an easy place, and the boats had to have a particular structure in order to be able to untangle themselves in the dense and intricate labyrinth of the canals: very special vehicles were therefore created, whose use is exclusively Venetian. Flat-bottomed boats that could sail in lagoon areas where the water is very low, narrow and tapered to be able to slip into narrow canals, all manoeuvrable with the oar: the fast pupparin, the mascarete used for fishing, the caorilines used for freight transport. Thus was born the Venetian rowing, a unique lagoon-style rowing technique, according to which a boat was maneuvered by a single oarsman, standing on the bow, driving it with a smooth oar leaning against an open oarlock, called a forcola: the position of the oar on the fork gave the possibility to carry out all the different maneuvers necessary. Today the Venetian vogue is a sport much practiced in Laguna, which sees its climax precisely with the Historical Regatta.

A glorious past in a fascinating reconstruction The event, which owes its name to the terms avrigare, that is to say compete or ruled, that is to say in line, is traced back to the XIII century, linked to the ancient and religious Feasts of the Marys, in which young girls were paraded in boats dressed for party. But it is probable that the first race is much older, linked to the maritime life of the Venetian Republic in which it was necessary to train the sea crews well. Between religious and secular celebrations the Regatta took place over the centuries until the fall of the Serenissima without having a regular cadence, maintaining that spirit between playful and agonistic, between celebration and re-enactment of ancient glory, to which the Venetians were very close, even willing to finance it at its own expense in order to flaunt its own greatness. The demonstration was then resumed in the nineteenth century under the Austrian Government, when the concept of sport began to spread: it was decided to finance it with public money and to carry it out every year. But it was thanks to the Art Biennale of 1899 that the Regatta took shape as we live it today, when the word "Historical" was introduced and a more celebratory imprint was given to it with the introduction of the historical procession which then opens the various competitions.

This of the historical procession is reminiscent of an ancient custom, when before the competitions boats paraded while launching the ballotte, terracotta balls, to keep the order of the spectators huddled along the Grand Canal to watch the show. Today no balls are thrown, but the historical procession that precedes the competitions is a spectacular re-enactment of the welcome parade that the Republic of the Serenissima reserved the 1489 to Caterina Corner, queen of Cyprus, who renounced the throne allowing in fact the annexation of the island to Venice. Today, in a faithful and fascinating reconstruction of the glorious past of the Serenissima, dozens and dozens of boats typical of the sixteenth century parade, with figures in period costumes to represent all the high offices of the Venetian Judiciary: to represent Caterina and consort there are the Doge and the Dogaressa, personified by Maria who, launching herself from the Campanile, will open the next Carnival.

The best of Venetian fashion in a very sensitive competition 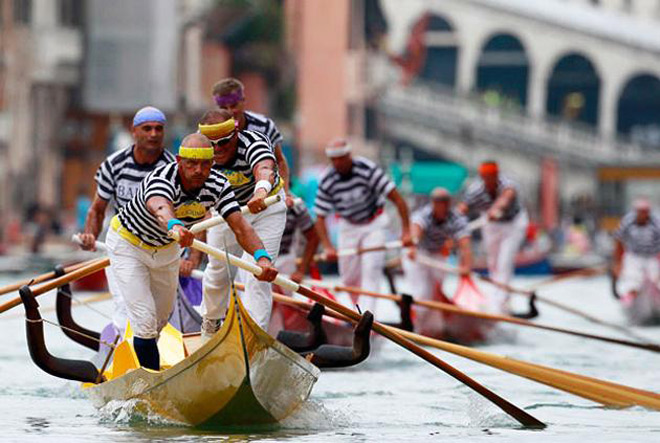 But beyond the romantic re-enactments, the Historical Regatta is above all a race deeply felt by the crews and the Venetians, which sees the best of the Venetian rowing compete. Eight regattas divided by boat type: the regatta of the schie marches, of the junior marches, of the senior marches, of the two-row pupparini, of the six-oar caorline, of the female mascarete and the most awaited gondolini with two oars, the queen of the competition. To these are added the 8-oar galleons in which the young crews of the University of Cà Foscari and a foreign university challenge each other

All boats are identified with a color, representing the six Sesteri of Venice and the islands of the Lagoon: white, canarin yellow, violet, light blue, red, green, orange, pink and brown . But above all they are combined with a number that is assigned following a draw, which will then establish the starting order. The race takes place all along the Grand Canal: starting from the spagheto in Bacino San Marco, near the Biennale Gardens, entering the Canal, then turning around a paleto, placed at a different point depending on the race, and you arrive at the machina, a floating structure placed in front of the Cà Foscari, where the authorities are located and where the prizes are then assigned. The winners receive a prize in money, in recognition of an intense year of hard training, and a flag, colored according to the position in the standings: red for the top finishers, and then white, green and blue in the following order.

The Venetian rowing is also an ancient family tradition that has been handed down from generation to generation to immortalize the practice of vogue over time: men and women who have made history and who become myths, and who deserve a special "coronation". Thus the titles of king and queen of the oar are born, attributes to the rowers winning results of at least 5 consecutive races: rowing in Venice is a very serious thing!

Sunday's race is always anticipated by the blessing of the crews and boats held on the previous Thursday in Campo della Salute, preceded by a Canal parade.

Venice with its parties always celebrates itself and affirms its singularity of amphibious civilization, offering the world an image of well-being, strength but above all of joyful social coexistence, which welcomes foreigners in a family embrace: let yourself be enveloped by the party, participate in palaces, foundations, boats, immerse yourself in the joy and fun of a unique experience!

Take note: the Historical Regatta is a free event that you can watch from the banks of the Grand Canal. If you really don't want to immerse yourself in the festive crowd and prefer to enjoy the event from a comfortable place, then you can follow the event from the stands in San Silvestro.

For reservations and info on this year's edition, to know the complete program of the event or to download the brochure, click here:

Go to the website of the Historical Regatta of Venice❯