The Hotel des Bains: one hundred years of history and the desire to continue to host 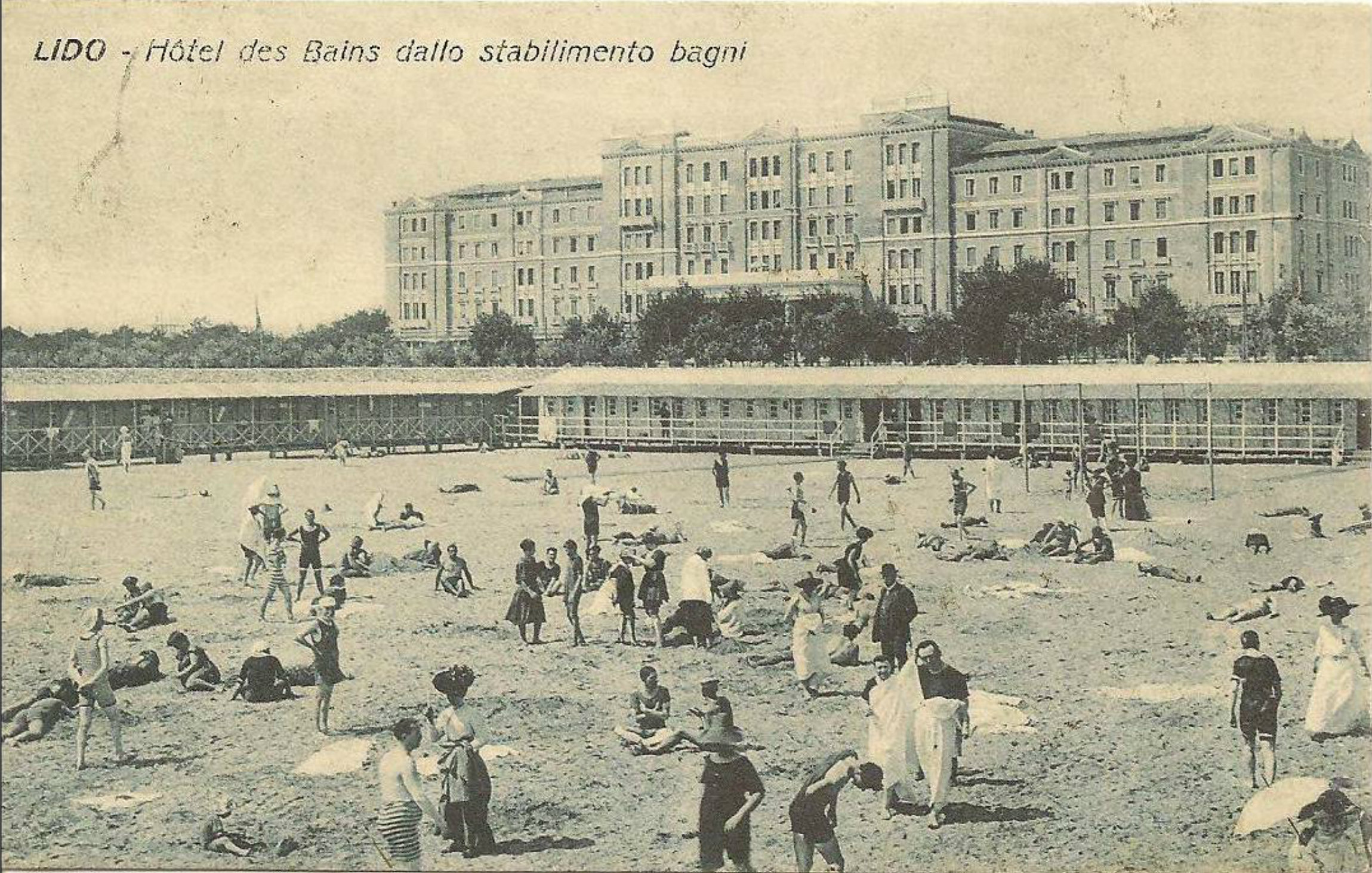 The city of Venice is rich in historic buildings that, despite the loss of their functions, have maintained their integrity and magnificence over time, becoming first-rate landmarks: the historic Hotel des Bains, located at no. 17 of the Lungomare Guglielmo Marconi of Lido, is a clear example of architectural work created for tourism purposes that has not lost value despite the closure. Built in 1900 on the renowned island of Venice Lido, he rode the wave of the affirmation of the place as a great seaside resort, renowned and known at European level and awarded for the modern installations that it hosted at the National Exposition of Turin in 1884: a success for the venetian city that was able to show its vanguard to over 14,000 exhibitors and about three million visitors.

The birth of the Hotel des Bains: a combination of splendor and vanguard 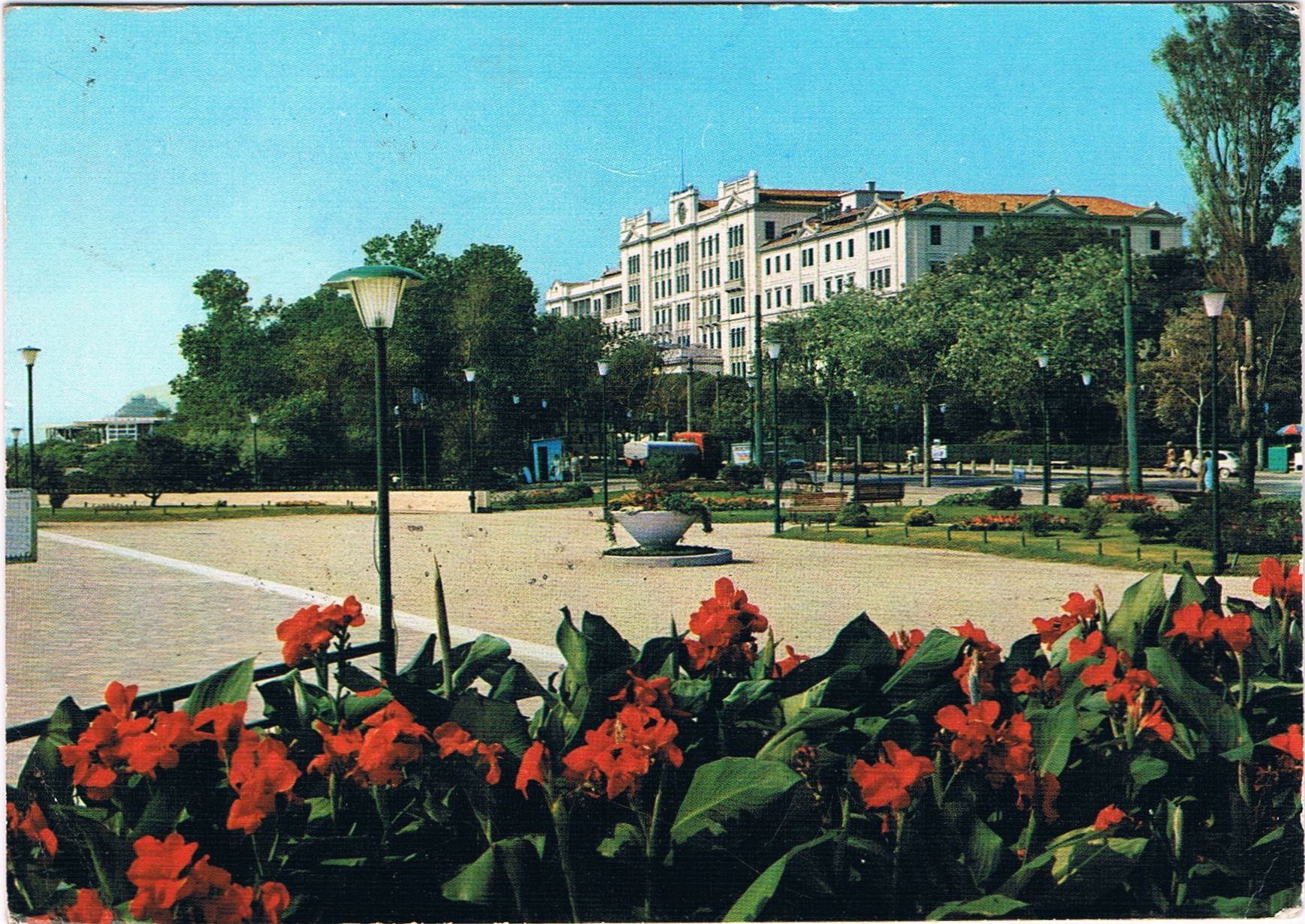 After the award ceremony in Turin of the Società Civile Bagni Lido, a group of bathing establishments established in 1872, the city of Venice invests many of its resources for the construction of enormous structures destined to magnificence, such as the Hotel des Bains and his younger brother Hotel Excelsior, built eight years later. The inauguration of the Hotel was a moment of great joy: on 5 July 1900 at 7:00 pm the doors were opened to the public and the complex was the site of a big party until the next morning. The pomp derived from an unprecedented modernity at that time, in fact it was immediately equipped with electric lighting, telephones, elevators, private bathrooms, drinking water, refrigerators and iceboxes. Over the next ten years, there were numerous projects destined to enlarge the structure to increase its magnificence, but not all were implemented: although the hotel was enlarged by incorporating an external building, Italy's entry into the war did not allow to the British banks to finance a tunnel that connected the center of Venice with the Lido. Thanks to the reputation of the hotel, European interest was in the construction of a 3 km long connection not only for pedestrians, but which would also host trams, water pipes, telegraph and telephone cables and pneumatic mail. The hotel initially had 50 rooms but before the First World War the number increased to 191.

The fluctuating past of the Hotel until the final closure 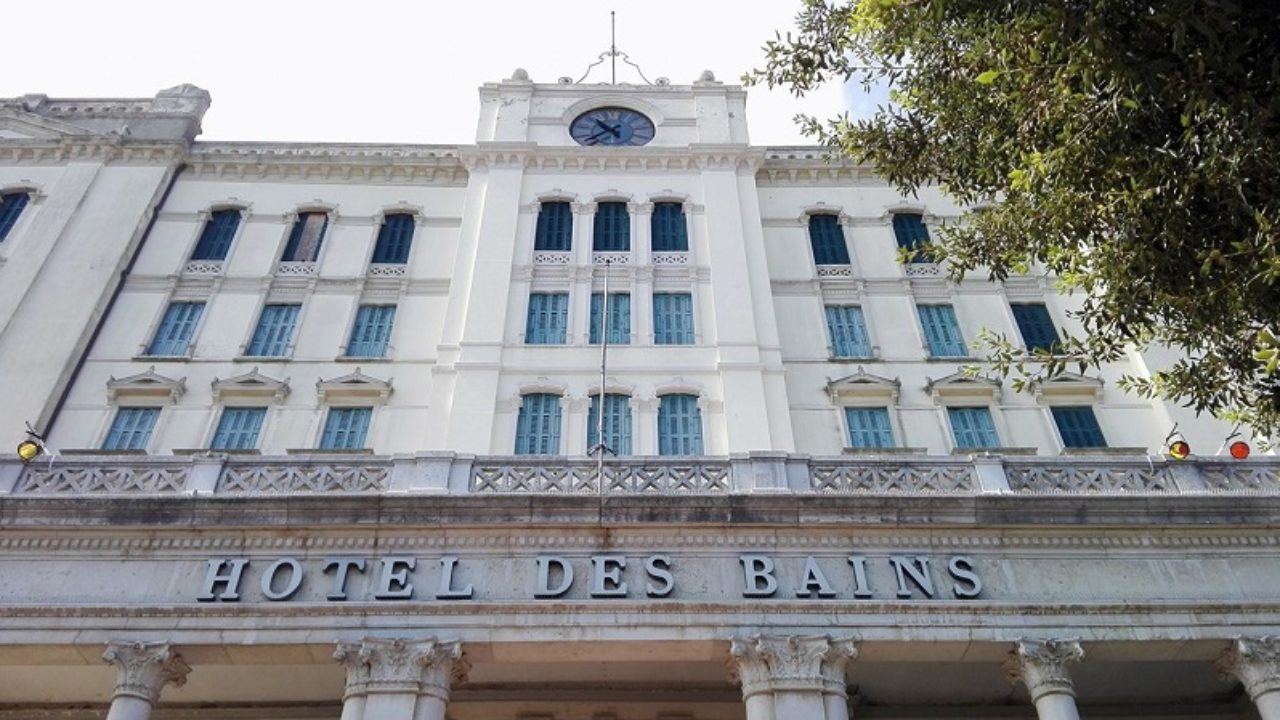 During the warring period, the Hotel des Bains closed and was deprived of water, the main reason for the fire that started in 1916 that destroyed the hotel in a few hours. The city of Venice could not allow the magnificence of the structure to be only a memory, and that is why it actively engaged until the reopening in 1919, a period in which it became, together with the entire seaside resort of the Lido, an obligatory stop for the national and international aristocracy and bourgeoisie: the luxuriant Belle Époque invaded the streets of Venice and the Lido, and guests used to spend whole days on the beach in elegant clothes. This return to primordial greatness allowed the Hotel to remain open during the dawn of the Second World War, unlike the first, and, requisitioned by the Germans in 1943 to make it a recreational circle, they undermined the surrounding lands, from the beach to the south to the north park. At the end of the conflict, the Hotel des Bains returned to Venice: the symbolic hotel of the Lido gained more and more fame until, in 1966, it was closed due to a disastrous wave of bad weather which destroyed the bathing area bringing to the hotel debris of the same, water and sand. After a few years of closure, the Hotel was reopened after being used as a movie set in 1971 for the film Death in Venice by the director Luchino Visconti, bringing back the splendor that seemed lost on the big screen. In 1995 he joined the Sheraton International group, a US hotel chain that had acquired the year before the "Italian Company Grandi Alberghi", a joint-stock company based in Venice, creating a new dedicated brand with the name "The Luxury Collection". In 1998, Sheraton International was acquired by Starwood Hotels & Resorts Worldwide, Inc. and consequently also the Hotel des Bains. After a period of activity under a large multinational brand, in 2010 the hotel closed to be transformed into a complex of luxurious apartments, with the name of "Residenze des Bains"; the works, however, were interrupted before completion and, to date, are suspended: between 2017 and 2018 about 10 million euros were spent for the des Bains and the Excelsior, but the actual investment for the des Bains which should start in 2021 and which will last at least three years will be at least 60 million euros. So it is still early, therefore, to be able to say if the Hotel will be home to luxurious apartments or will return to being the Hotel that has always been.

A venetian building designed and built by venetian hands 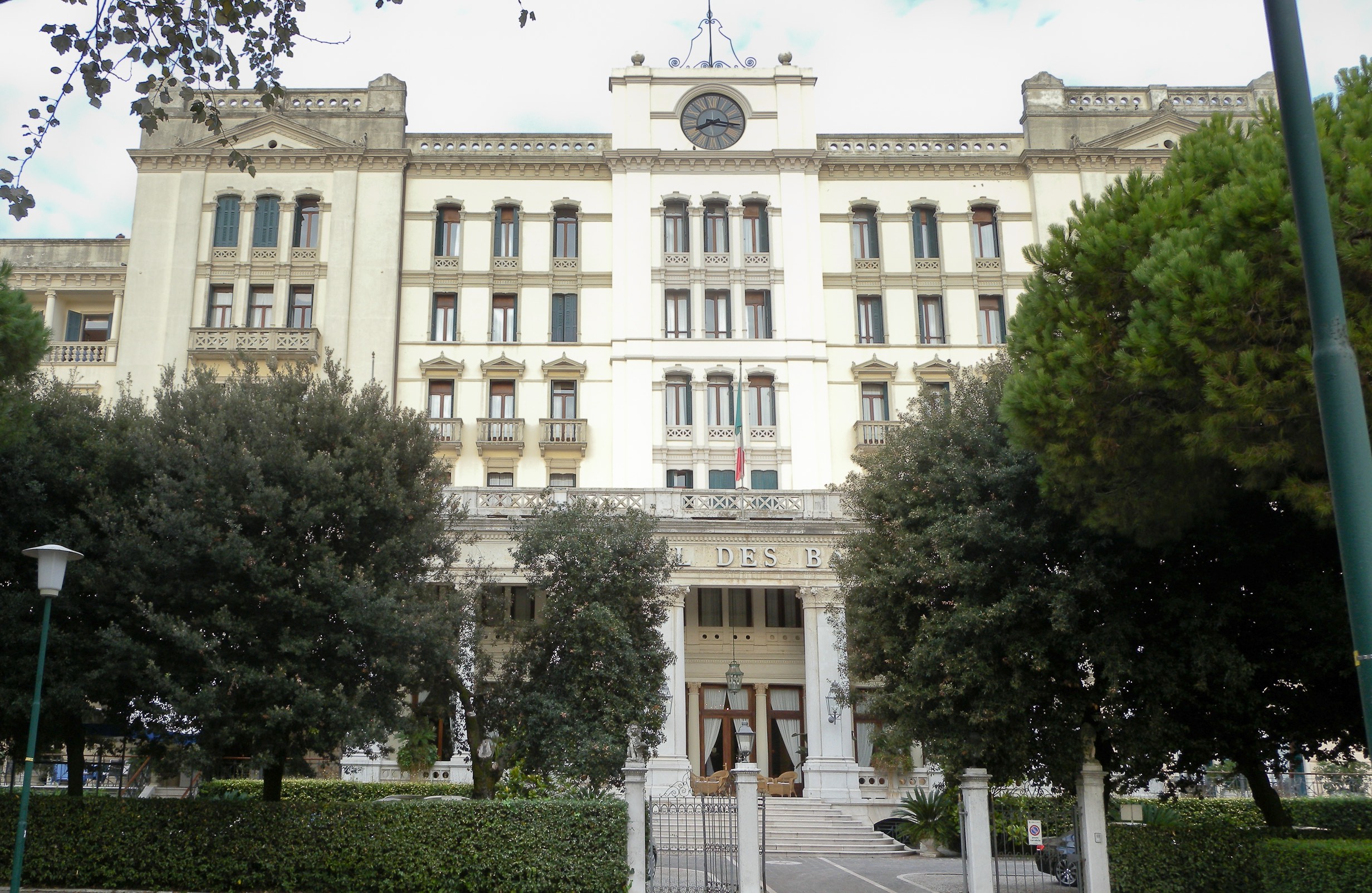 The building of the Hotel des Bains was decisive not only for the urbanization of the island of the Lido, but also as an affirmation of the same in the architectural and stylistic sphere: made by Raffaello and Francesco Marsich, two brothers born in the province of Udine, the Hotel looks like a six-storey central body joined to two five-storey lateral bodies, creating a single complex embraced frontally by a majestic entrance and laterally and posteriorly by a park created from a centuries-old forest rich in plant varieties. The two brothers adopted a style consistent with the era, designing the Hotel with a sober Liberty style: the entrance, raised by ten steps, forms the basis for eight front columns and two rear ones, giving the two central units greater thickness. Looking up, you will see a terrace, placed exactly on the columns, and the remaining five floors ending with a central glass clock. In 1905 a hall was built in the oldest part of the hotel, which today is called Sala Visconti, in honor of the famous director, with a small octagonal plan of a balcony overlooking the area below and a wrought-iron balustrade: the interior lighting comes from a large Murano glass chandelier made by the Barovier brothers. Today the Hotel presents a different layout, given the interventions carried out between 1924 and 1926, carried out by the engineer Giovanni Sicher and by the architect De Luigi, who have equipped the Hotel with new rooms: the Thomas Mann room, dedicated to the German writer, and the huge restaurant, characterized by a luxurious elegance offered by white and golden stucco decorations. 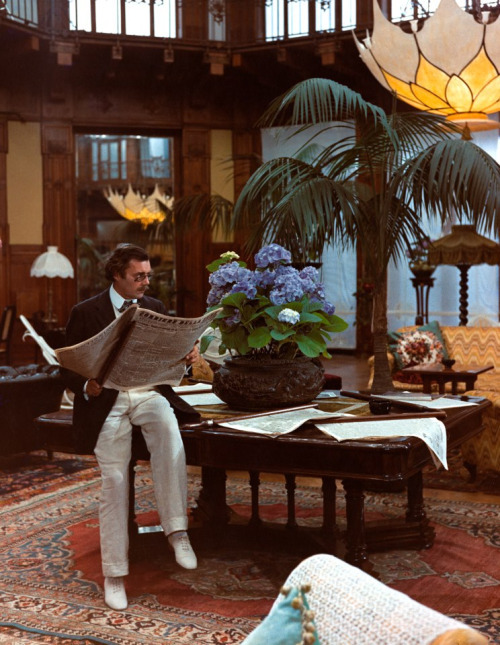 After the accident caused by bad weather in 1966, the Hotel des Bains was chosen as the film set of two films that made the history of cinema: inspired by the literary work "Der Tod in Venedig" by Thomas Mann written inside the building, the director Luchino Visconti in 1971 directed the film of the same name Death in Venice, winning a David di Donatello, four Silver Ribbons, a Golden Globe, four BAFTA Awards, the 25th Anniversary Award at the Cannes Film Festival and he was nominated for an Academy Award in the "Best Costumes" category, given his commitment to recreate an environment that can be traced back to the 1920s. In 1997 Anthony Minghella shot a few scenes of The English Patient who, among numerous awards, won nine Academy Awards. Today the Hotel relives the magnificence of the past thanks to the International Film Festival, hosting a beautiful photographic installation in the hall linked to the festival, to directors, actors and screenwriters.

An obligatory stop for guests from all over the globe 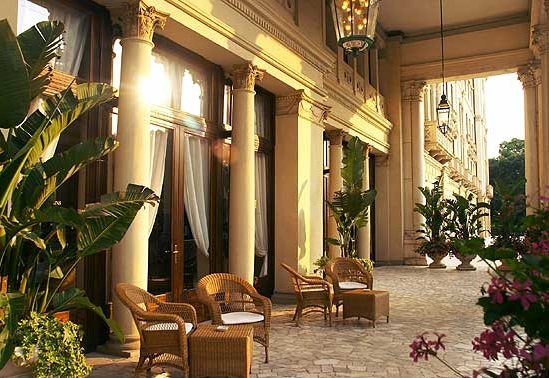 Numerous are the characters who have stayed several times inside the Hotel, including first of all the Nobel prize-winning writer Thomas Mann who in 1911 wrote his already mentioned masterpiecewhat 60 years later became a cinematographic work; the Russian choreographer Sergej Pavlovič Djagilev, who died there in 1929, the American journalist Elsa Maxwell, the Shah of Persia Reza Pahlevi, King Farouk of Egypt, Adolf Hitler, who first met Mussolini, Henry Ford, Giuseppe Volpe, Count of Misurata to which we owe the birth of the Venice Film Festival, and many others. During the days of August of the first edition of the International Film Festival held in 1932, the halls of the Hotel were filled with artists from all over the world: from the philanthropist, actress and stylist Liz Taylor to Robert de Niro.