The masks of the Venice Carnival: in the sign of tradition

Masks, confetti and lots of fun, of course we are talking about the Carnival of Venice, the most anticipated party of the year in the city that sees tourists and citizens put on masks to live one of the liveliest and most appreciated Carnival celebrations in the world. But how was this very special tradition born?

The festival has a very old tradition (for history click here) since it was born by order of the Republic of Venice, which in an edict gives all citizens a public celebration in which to unleash their excesses, especially in order to mitigate the bad moods of the lower classes. It is above all for this reason that the use of disguise is beginning to be encouraged, in order to even out social inequalities, to hide one's identity and to allow oneself moments of unbridled amusement during this exceptional event. A mask hid one's social class, one's religious beliefs, sex and social status: it was a bit like going on stage, and on the most beautiful stage in the world one played a role different from one's own identity. For calli and campielli when you met each other there was a simple "good morning Mrs. mask", a greeting that reset all the differences!

Masks and mask craftsmen, the ancient tradition of the Serenissima 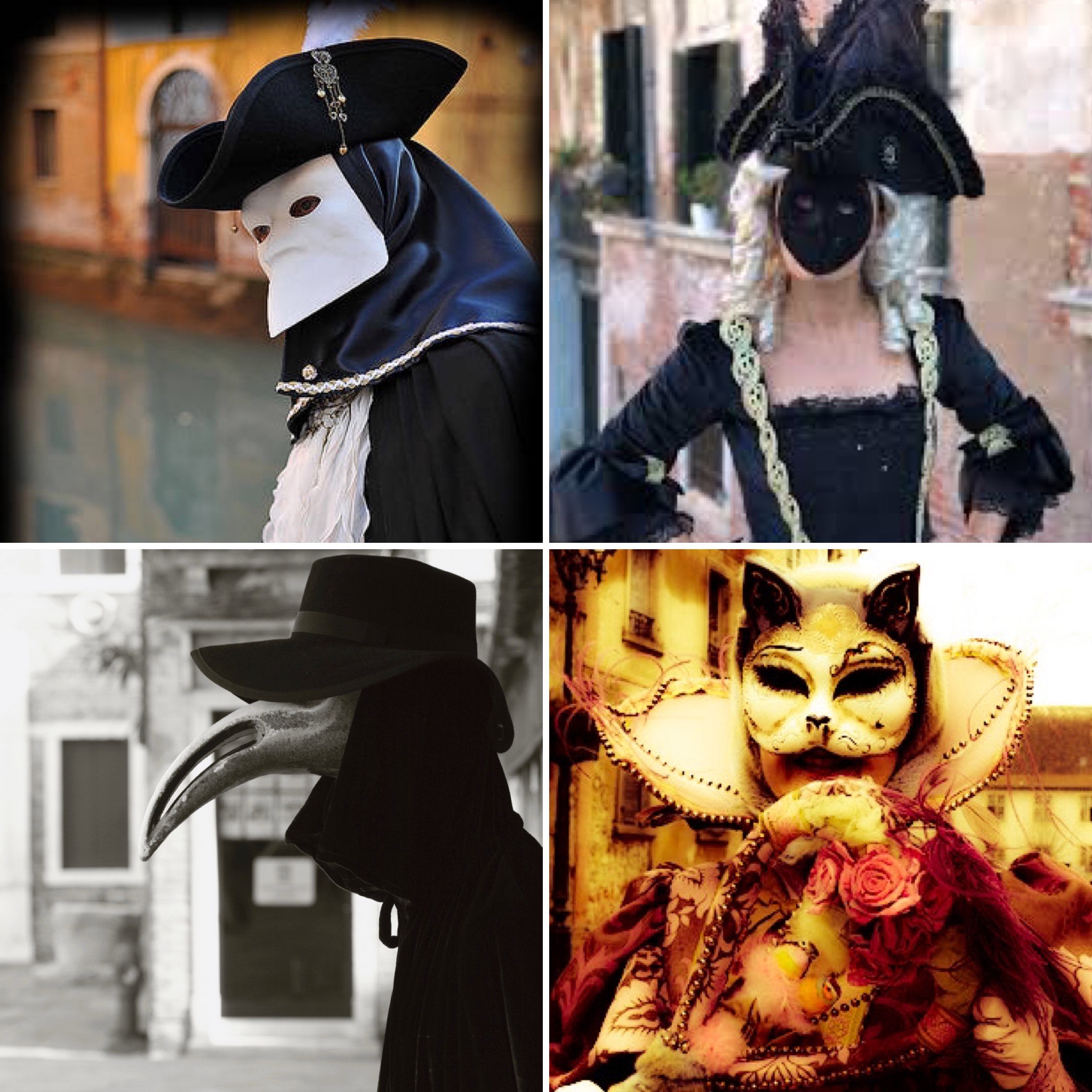 The typical Venetian masks were originally made of papier-mâché, clay or gauze, they covered the face entirely and left little chance of being "unmasked".

They were produced by the special mascareri, that is to say those craftsmen specialized that were added to other important Venetian handicraft traditions such as the glassmakers of the nearby Murano. Even the mascareri had their own statute, the mariegola, granted by Doge Francesco Foscarini, to manage and administer their profession.

For the creation of a mask it was a rather long and complex process and involved the use of various materials: the first step involved a drawing on paper for the study of shapes and proportions; then a clay model was made and then a plaster cast. This was then covered with papier-mâché and gauze held together by a flour glue, and once dry, the cast was removed and the mask was obtained, then finished at the edges and openings. Finally, the decoration was carried out with a blaze of colours, precious stones, embroideries and feathers.

Among the most ancient disguises of the Venetian tradition is that of bàuta, a male and female figure with a long cloak named tabarro and tricorn hat to which the mask itself is added: with a square shape with the particular shape of the pointed and protruding chin that gave the possibility to drink and eat without the need to remove it from the face, covered the face completely and the particular shape even managed to camouflage the tone of voice for an absolutely perfect transformation.

The gnaga, on the other hand, is different, a cat-like mask used more by men than by women to impersonate "femininity" in a goliardic way, involvandosi a little 'language:  was to dress up as a woman and imitate the voice with a rather shrill sound. From here was born the expression still in use "ti ga na vose da gnaga" (you've got a voice like a gnagna), to indicate who has a shrill or high-pitched tone of voice.

Initially born for a practical necessity, here is the mask of the plague doctor. One of the heaviest plagues in the history of the city of Venice. It consisted of a mask with a long nose that contained a filter composed of salts and aromatic herbs disinfectants: rosemary, garlic, juniper. Over time this costume has acquired a superstitious meaning, exorcising not only the plague but every single contagious disease. A good luck charm practically

Other characters such as moretta or omo selvadego were very simple to make and to interpret, the first one consisted of a black velvet mask that was supported with a small button a little button to hold in your mouth making the person who wore it mute; the second one was usually proposed during Shrove Thursday and consisted of a disguise of animal skins and an interpretation of a wild man, peasant and naive and vulgar, a simpleton of other times.

The masks of the Commedy art 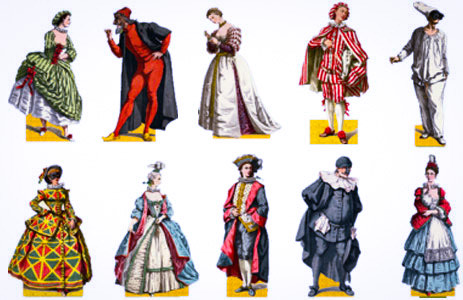 With the passing of time these first traditional masks were added to those of the Commedia dell'arte or a new way of understanding the theatrical performance, which was produced with the improvisation of the "canovaccio" by the actors; it was introduced by the venetian Carlo Goldoni, an author who revolutionized Italian literature and consequently carnival traditions not only in Venice.

From this moment on, the idea of the disguise invested all parts of Italy and stylized characters began to develop, varying from region to region. The theatre and popular tradition began to mix, so much so that today the term maschera (Litt. Mask in Italian language) is also used to refer to the theatre attendant (or even to the cinema) who was in charge of accompanying the audience in the theatre, precisely because all those who worked in the 18th century popular theatre were necessarily masked. What a charming tradition!

Here they are then, the masks of the Italian comedy, famous in Italy and in the world and protagonists of the Venetian Carnival:

Harlequin, a famous mask from Bergamo, is the cheating, gullible, foolish and always with a great appetite. Very close to Venice, since it was Carlo Goldoni himself who wrote about him in "Il servitore di due padroni" (The servant of two masters), he is represented with a dress patched with coloured rags, a hat and a black mask that mixes the features of a feline and a devil.

Colombina is the Venetian servant girl: we often see her paired with Harlequin, her companion of adventures, and she exasperates in a caricatured way the characteristics considered feminine at the time, such as her ease and coquetry. Her dress is rather simple, characterized above all by the presence of an apron and a white bonnet.

Pantalone is another famous Venetian mask. It seems that its name derives from San Pantalon, much venerated in the city to which a church is also dedicated, or from the term "pantaleoni", which used to indicate the merchants who planted the flag with the Lion of St. Mark to conquer foreign lands, marking the territory. And in fact, the mask of Pantalone is portrayed as a lustful old merchant trying to conquer young women, unleashing the wrath of young Venetians. His figure is portrayed with short, light-coloured stockings below the knee, a red jacket, a woolen Greek-style cap on his head, Turkish style slippers at the feet and a belt at the waist from which a sword or purse hangs, wrapped in a long black cloak. It is clear how this figure embodies a certain ethic of the merchant class which, even without noble births, was carving out its place in society.

Balanzone, a mask linked to Bologna, known as a serious, cultured character with an exaggeratedly presumptuous character, known to most people also by the name of Dr. Balanzone. With a big belly, he always wears a black toga, like that of the professors, on which the wide collar and white cuffs are exalted, complete with hat and cloak.

Meneghino is the mask of the city of Milan, characterized by a sense of honesty, sincerity and a sense of justice despite being a character of popular tradition. His suit is always very colourful: made of a long jacket with a vest usually yellow, green short knee-length trousers and red and white striped socks.

Pulcinella, is the famous Neapolitan mask: it depicts an often melancholic servant who blends the characteristics of the fool, the good-natured with a great dose of popular wisdom. It seems that its name comes from the word "pulcinello", that is, small chick, due to the shape of its hooked nose, or from Puccio d'Aniello, a seventeenth-century jester from Acerra. Represented always with wide trousers and a long white tunic, a hat in the shape of a "pan di zucchero" and the unmistakable black mask.

These are obviously just some of the very traditional Italian masks, some of them we will certainly see in the streets of the city during the celebrations of this Carnival 2020.

And which of these will you wear for this Carnival?