The Metropolitan Carnival: all events and shows around the city of Venice

The Carnival, a tradition that also spreads outside the city of Venice 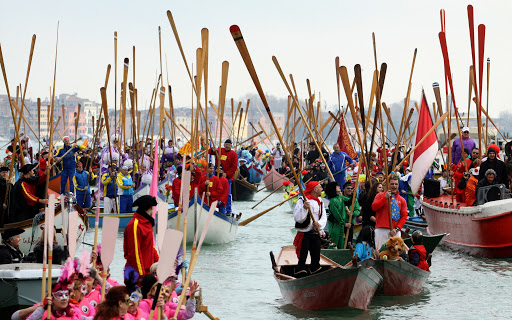 The metropolitan city of Venice is a reality that replaced the homonymous province in 2015 and which includes just over 40 municipalities which, over time, have acquired the tradition of the Serenissima by offering over the years their own carnival events and shows that flood the cities with joy and party: discover all the parades of allegorical wagons and the events of the Metropolitan Carnival, days of fun inspired by Venice.

Gazzera is a small neighborhood located between Zelarino and Mestre and exactly like the latter two, it too will host its own carnival. Tuesday 25 February, from 10.00 to 12.30, you can spend a few hours in the company of the masked parade that will cross Via Brendole, the main street of the neighborhood, and then arrive at the homonymous square where the Parish of Santa Maria Ausiliatrice stands. There will be artistic exhibitions, tastings, shops and entertainment for the little ones. The event is promoted by the Gazzera Artisan Traders Association, which through the hashtag #farelaspesasottocasa intends to emulate the great Venetian carnival and guarantee the citizens of the peripheral neighborhood a day of celebration, joy and colors. The parish, in collaboration with the "NOI" club of Campolongo Maggiore, organizes the 33rd edition of the Carnival in the Piazza which will be held on Sunday 16 February starting at 2.30 pm. Campolongo Maggiore is a small town near the Brenta river, about 5km from Piove di Sacco, 20km from Padua and 35km from Venice. The day will include a parade of wagons accompanied by masked groups, which will leave from Piazza del Municipio to Piazzale della Chiesa. There will also be the opportunity to taste many delights, such as galani, pancakes, desserts, bacon, polenta and good wine. At the gates of Portogruaro, a large inhabited center of the territorial area called "Eastern Venice", you will find the small town of Concordia Sagittaria which still preserves the historic Cathedral of Santo Stefano Protomartire. An excellent opportunity to visit it is Sunday 16 February and Saturday 22 February on the occasion of the carnival organized by the oratory of the church of the same name. The Sunday program includes a departure at 14:00 with the parade of allegorical wagons which, after a complete tour of the city, will arrive at Piazza Card. Celso Costantini in which the best wagons will be awarded. Saturday 22 February there will be a night parade, which will start from 20:00 until 22:00 and then move the party inside a heated structure with DJ set in the central Via Roma, where you can access for free. In case of bad weather the challenge the parade will be canceled, differently from that of February 16 which will be postponed to 23. 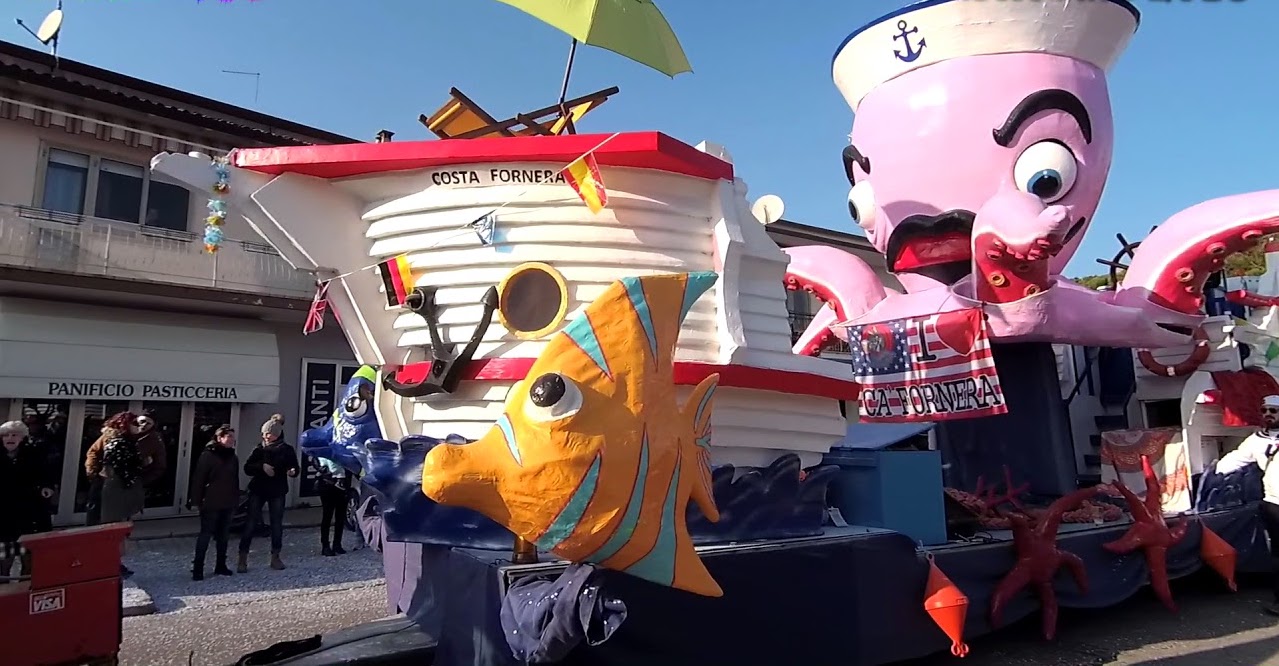 The 41st edition of the Eraclea Carnival, famous for being a renowned summer tourist resort, will take place on Saturday 22 February, organized by the Municipality and the Pro Loco which, in case of bad weather, will postpone the event to March 7. About 45km away from Venice, the evening's program includes:

• At 18:00 musical entertainment and food and wine tastings;

• At 20:00 parade of allegorical wagons and masked groups up to Piazza Garibaldi;

• At 21:00 draws of the carnival lottery to end a pleasant evening full of movement. 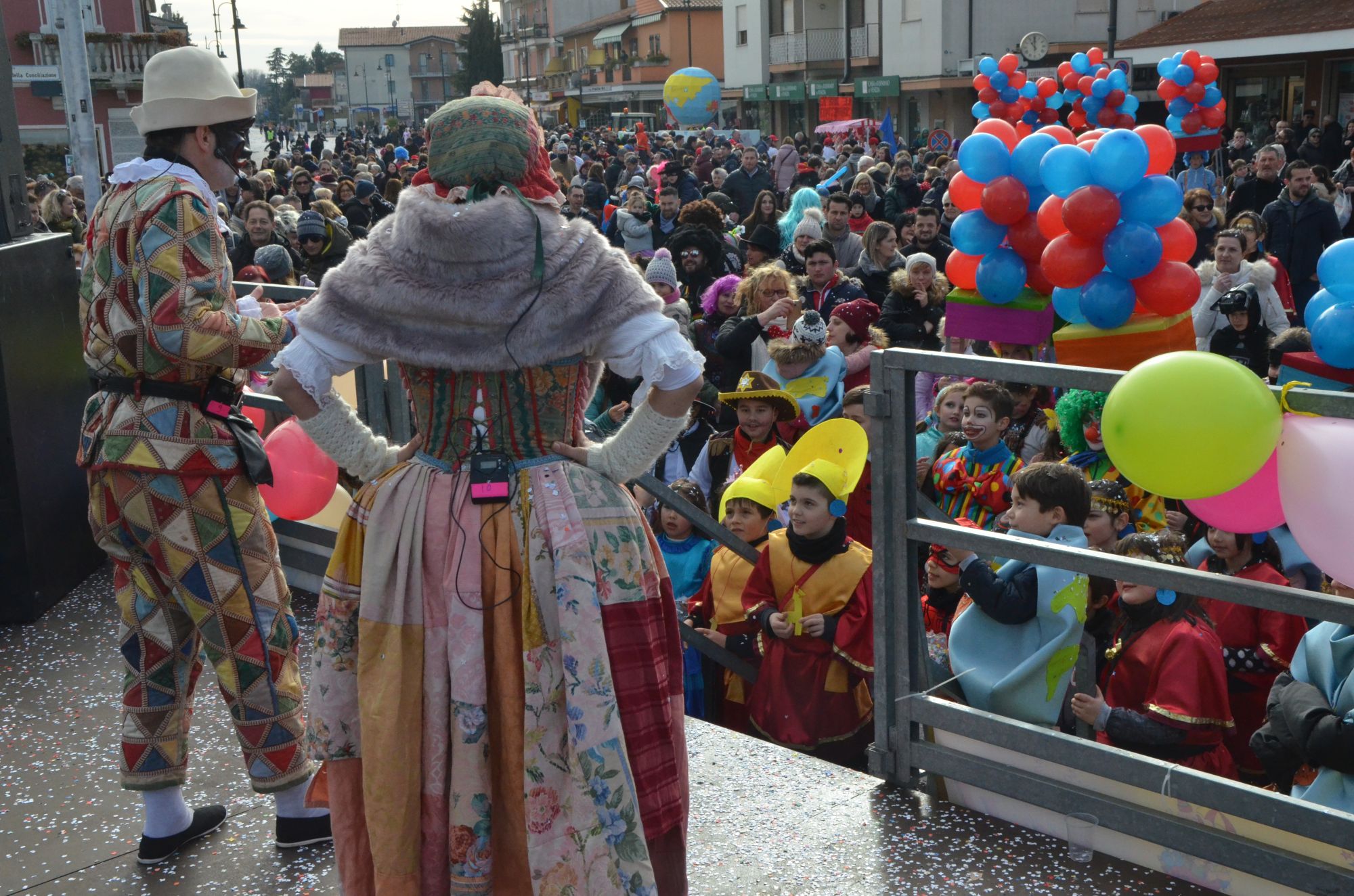 In Fossalta di Piave, a few kilometers from San Donà di Piave and about 35 km from Venice, the 40th edition of the Fossaltin Carnival will be held on 16 and 25 February: 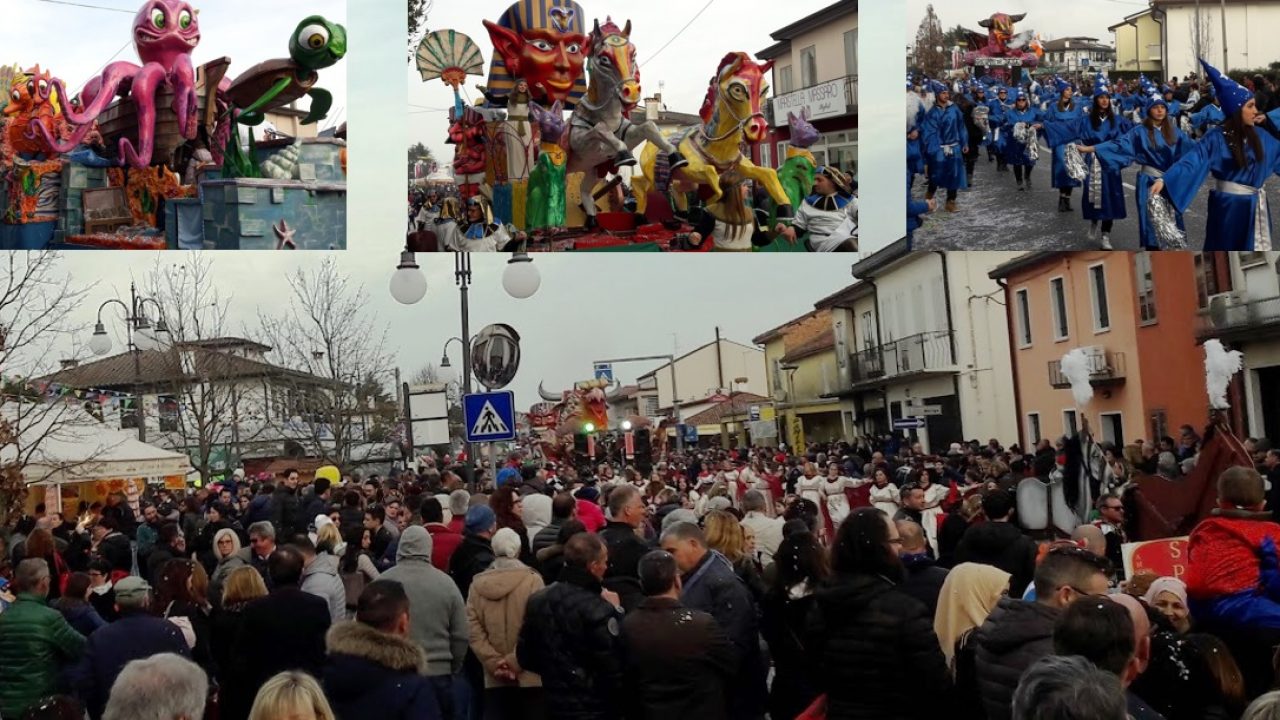 Sunday 23 February at 15:00 the carnival will be celebrated in Piazza San Martino in Pianiga focused on 100 years since the birth of Gianni Rodari. Reachable in 30 minutes by car from Venice and Padua, the day's program includes numerous games with themed prizes accompanied by traditional carnival sweets:

• From 16.15 to 17.15 competition for the decoration of team masks with the collage technique; 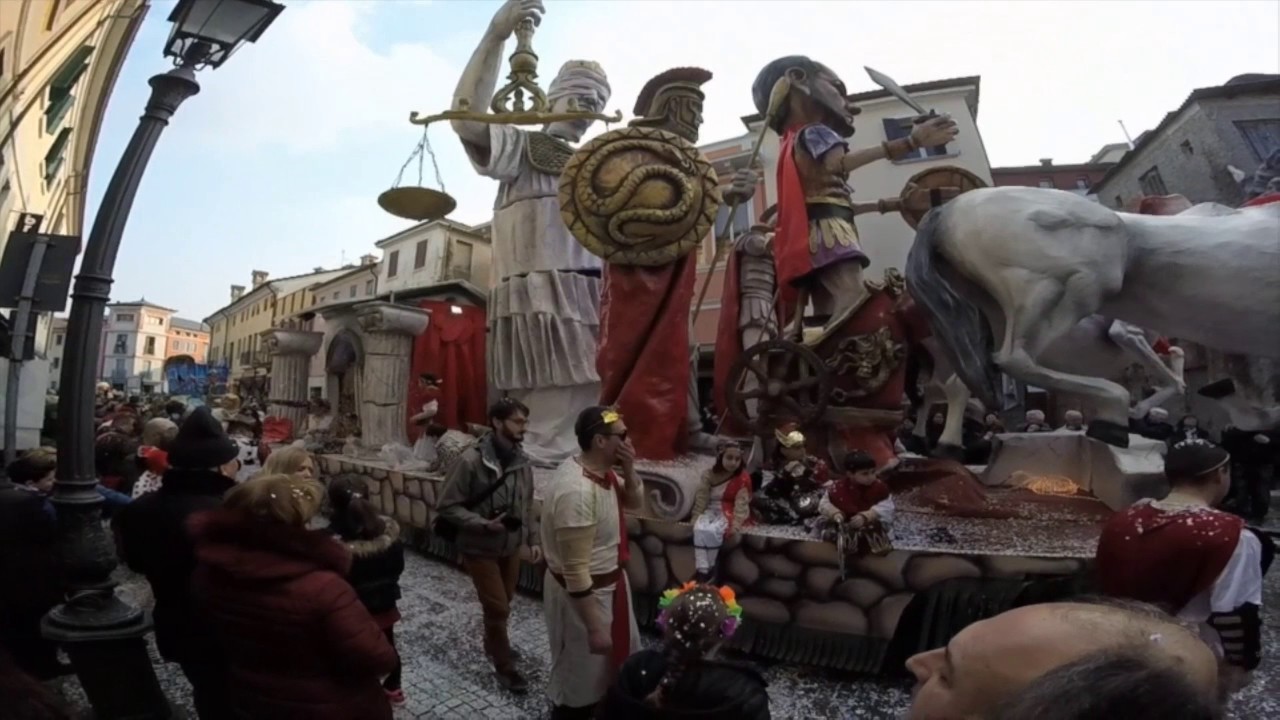 In San Stino di Livenza on Sunday 16 February the 47th edition of the Sanstinese Carnival will be held. The appointment includes the typical parade of allegorical wagons together with the masked groups that will go around the streets of the town. This year it will be possible to choose the most beautiful wagon by leaving a reaction to one of the photos on the event's Facebook page. 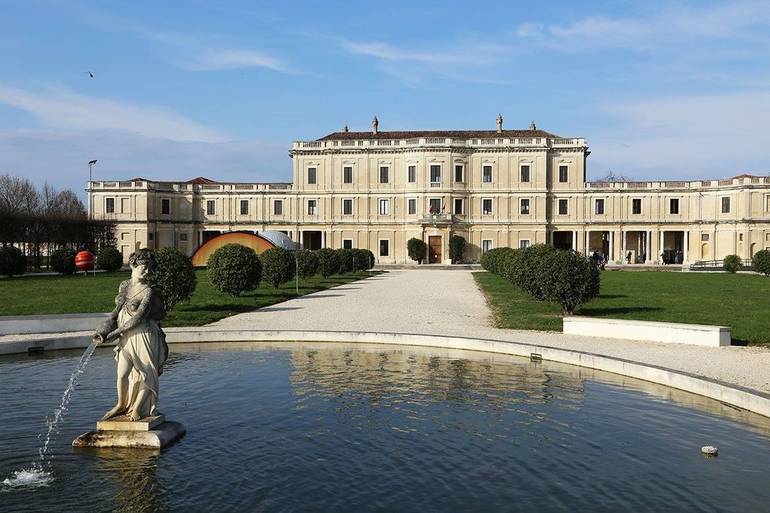 Carnival arrives in the small town of Santa Maria di Sala with a double appointment, a good opportunity to visit Villa Farsetti, a villa inspired by the Palace of Versailles:

• Sunday, February 16, the first big parade of allegorical wagons will be held in the hamlet of Caltana;

• The second parade will take place on Sunday 8 March in the hamlet of Caselle de’ Ruffi.

Carnival of the boys of Ceggia 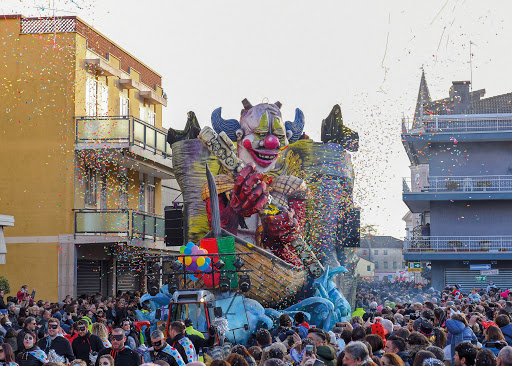 To the north-east of San Donà di Piave and about 30 minutes by car from Venice, you will find Ceggia, a small urban center that this year will host its 67th edition of the Carnival of the boys of Ceggia with a rich, varied and accurate program spread throughout the month of February:

• Saturday 8 February at 18:00 at the Town Hall of the Municipality of Ceggia, the Popular Carnival will officially begin: an evening of masks, confetti, majestic allegorical wagons and lots of joy and cheerfulness;

• Sunday 9 February at 16.00 there will be the 5-a-side football tournament at the Palazzetto dello Sport located in via Folegot;

• Sunday, February 15 at 14:30 a day dedicated to fun for all the little ones will start: at the Folegot Room of the Casa della Doctrina you will find make-up artists, balloons and inflatables, cooking workshops, masked parades and group games such as the pentolaccia. A snack will be offered to all participants and to conclude the children will be able to attend a magic show;

• Sunday 16 February from 16.30 musical performances will start which will prepare the spectators for the parade of nocturnal allegorical wagons;

• Thursday 20 February at 20:30 theatrical show at the Toniolo Theater;

• Friday 21 February at 20.45 at SpazioRamedello will open the exhibition "A Carnival King" by Guerrino Lovato, which will remain open until April 5;

• Saturday 22 February at 17.30 at the Palazzetto dello Sport you can attend the skating Grand Gala and, at 22.00, the appointment will move to Parco Livenza, home to a masked party, dancing and acrobatic shows;

• Sunday 23 February the party will start from the morning, with the “Corsa dei Coriandoli” at 9.15 and will continue until late evening entertaining you from 14:30 with the parade of the Ceggia wagons and the presence of food stands and, from 19.00, with a musical concert;

• Tuesday 25 February you will be able to attend the final parade of the Ceggia children's carnival at 14:30, the last chance to admire works of art made by the locals for this year and, at 18:30, there will be the award ceremony and the proclamation of the winning group of the Carnival. Participation in one or more events foresees a cost of € 6.00 for a fashion show and € 12.00 to subscribe to three fashion shows. Children under the age of 12 will have free access.

Jesolo also celebrates its Carnival: there are many initiatives that will see adults and children, including theatrical and musical performances, masked artists who will animate the streets of the city and parade of floats.

This is the program in detail: