The mystery of the "piere sbuse" in Venice: what are they?

The "piere sbuse" on the walls of the Venetian palaces Walking through Venice and being fascinated by the variety of architecture that the city offers, you will surely have noticed some "unusual" protruding and pierced stones on the walls of some buildings. These stones are called "piere sbuse", usually in Istrian stone and 25 to 40 cm long, with a hole with a diameter of about 10 cm in the outermost part. They are clearly evident in many areas of Venice, especially on private buildings of some historical significance in the San Marco district and in the Rialto area. The "piere sbuse" or "pierced stones" are always and at least in pairs, a few meters away from each other, and if the stone is only one it means that the other (or the others) were removed in case of remanufacturing , were destroyed, or succumbed to the base due to the instability caused by the flow of time. There are many painters who have painted these protrusions on the buildings and many others have written their version of use, but no one has ever revealed the mystery and explained its real usefulness. According to some scholars they were used to support wooden or iron bars for the defensive purpose of the buildings in the event of an enemy assault, but this hypothesis would not be credible given that Venice has always been far from internal turmoil and feudal discord. Others, on the other hand, argued that the wooden or iron bars had the usefulness of supporting the clothes to be dried after dyeing, but even this would not be credible given the enormous amount of "piere sbuse" on luxurious buildings, certainly homes not in possession of dyers.

In addition to the "piere sbuse", it's possible to notice less frequently the so-called "R" reverses or "pelican beaks": on some medieval buildings, on the sides of the windows, it's possible to see stone protrusions that extend with a rod wrought iron similar to a shape of "R" in reverse. Similar to hooks, they are called "pelican beaks" because they recall the throat pouch of pelicans, and may have had the same usefulness as "piere sbuse".

The hypotheses on the usefulness of the "piere sbuse" Analyzing the clues, that is, that the "piere sbuse" are almost always on the upper part of a facade and not necessarily the main one, which protrude on the sides of the polifora or windows (but also under them or under the roof), and that it's possible to find them on windowless walls on Venetian palaces and on former territories of the Serenissima, the possible hypotheses can be:

- The "piere sbuse" had the task of actually supporting wooden or iron bars to hang out the laundry;

- The same wooden bars, or iron, had the utility of drying the heavy clothes of the dyers;

- They could be supports for doors to be closed in case of enemy assault;

- They could have been supports for banners, as in the past it was customary to spread flags and ancient banners during countless feasts and processions. However, it must be specified that some facades with the "piere sbuse" aren't very visible or located on internal streets, sometimes even very narrow.

- The last possible hypothesis, as well as the most probable, is the possible use to support awnings intended to repair the underlying shops and related merchandise. 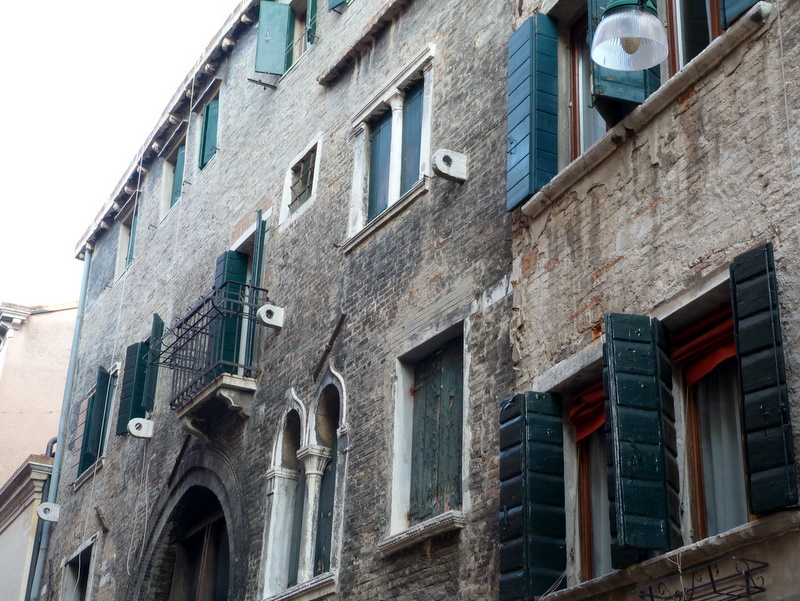