The Schools of Venice: a hidden treasure in the city

In the 13th century, mainly in northern Italy, a system of lay confraternities developed, known as Scuole (Schole in Venetian), whose main function was to create various points of reference for the population. Two elements distinguished the Venetian Schools from those in other territories: the limited influence of the clergy in controlling their activities and a strong relationship with the State, which guaranteed their supervision and protection.

With the Serenissima, Venice saw the birth and proliferation of many of them, and they took on immense value in our splendid city, both for the role they played and for the immense artistic heritage that many of them have left us.

Initially, three types of Schools developed: Communes of devotion, of artisans and merchants; of foreigners and of the Baptists, otherwise known as Schools of devotion.The first two belonged to artisan and commercial guilds, while the last was a confraternity made up of flagellants, known as 'Battuti'.

The common element of the different Schools was devotion to a particular saint who became the patron saint to whom they dedicated an altar in a church.

From 1467 the first two types were united under a single macro denomination and took the name of Scuole Piccole, while the Battuti were defined as being part of the Scuole Grandi.

In this article I want you to discover this part of Venice, the one linked to the Scuole, which unfortunately is still not very well known.

The Small Schools: Brotherhoods of social, economic and religious inclusion

The Small Schools came into being as a specific response to the social and economic problems of the time by specific categories of the population.

As mentioned in the introduction, they incorporated different confraternities. But let us look at them in more detail!

The Common Schools, also known as Devotional Schools, were those with the widest range of types of people in terms of occupation, place of residence, social and economic class and gender. The particular openness of these Schools to members coming from all over the city was one of their distinguishing features because, as a rule, the members of the confraternities tended to join a particular School on the basis of their proximity to it. Their composition could vary from a few dozen people to a maximum of two hundred. On average, however, they grouped about sixty people, which suggests that the number of members of this type of association was much smaller than that of the Scuole Grandi.

A very interesting variant of the Scuole Comuni were the Scuole Nazionali which, as can be guessed from their name, grouped together all the people coming from different places and were very useful to create aggregation and integration in a new territory, thus restoring to the newcomers in the city a sense of belonging and an opportunity to have a say in accessing the resources and riches of Venice. Moreover, these national associations were also very useful for the integration of those merchants who were only passing through the city or who did not stay for long. Contributing to the creation of a new sense of belonging was the choice of patrons and cults already present in their homeland, so that foreigners were able to preserve their own cultural identity around which they could then build new relationships and new syncretic, or new hybrid, identities. Thus Schools were born for the Lucchese, the Milanese, the Bergamasks, the Florentines; but also for the Albanians, the Greeks, the Germans. Today, the only active National School in Venice is the Dalmatian School of Santissimi Giorgio e Trifone, otherwise known as the Scuola degli Schiavoni. The school was founded in 1451 in the Sestiere di Castello and contains a famous cycle of paintings by Vittore Carpaccio, painted between 1502 and 1503.

Looking forward to visiting the School? You can take a short virtual tour of the beautiful premises online! 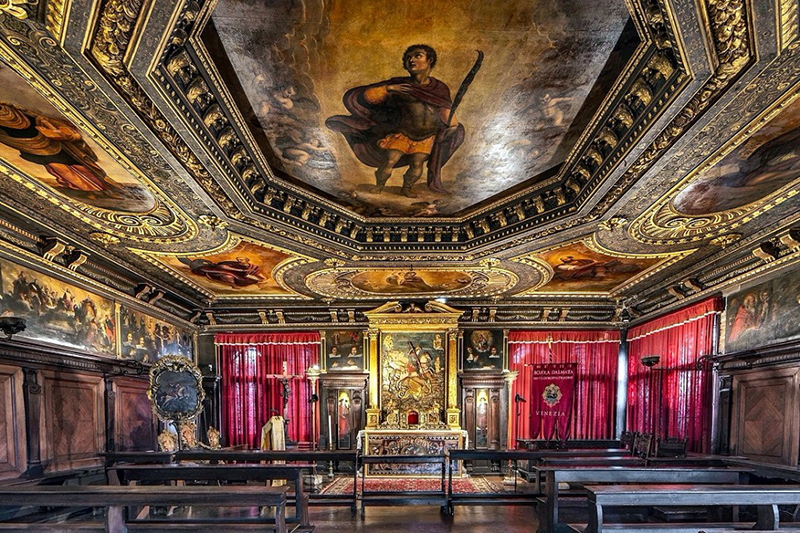 The last type that falls under the term Scuola Piccola is that of the craftsmen or Scuola dell'Arte. In Venice the Arte was a historical and juridical identity in its own right and was formally separate from the Scuola proper. However, the associative group could be made up of the same members as it usually happened that the members of the Arte also joined the corresponding Scuola. Following this particular structure, the Arte was given the task of directing and coordinating the commercial activities, while the Scuola was responsible for the religious and charitable functions of the members. The choice of patrons fell on those who had carried out the same trade in their lifetime. Some examples are the Scuola dei Calegheri, whose patron was Saint Aniano, the cobbler to whom St. Mark turned after a broken sandal, and the Scuola dei Sartori, whose patron was Saint Ombono, who had been a tailor in life.

Given that the Serenissima boasted a large number of Arts in the city, the fragmentation of the artisan class was such that more than a hundred associations were formed! This massive presence of Schools therefore gave its members more opportunities to actively participate, through their prestigious positions within them, in an essential part of the public and economic life of the city.

The Big Schools, a bit of history

Of the different types of Schools, the Great Schools were the most devotional. They were made up of people who had no particular profession or nationality in common. The elements that characterised the members were a particular devotion to a saint and a strong desire to carry out charitable works.

Now, the people who joined these associations or confraternities belonged to the "fat" people, i.e. those who did not have access to political power as the nobles did, but who were well-to-do or even rich, in short what we would call the bourgeoisie.

For this section of the population, the Schools were real centres of power through which they could assert their authority over the city. This translated into donations to the Republic when it needed them or into interventions with appropriations in times of war. In short, the Schools played a decisive role in cases of serious emergencies. In addition, over the centuries the initiatives undertaken were aimed at all those in difficulty, such as young women who could not marry because they did not have a dowry, or the homeless, or the poor who could not afford a burial, but also at building hospitals and hospices, thus intervening where the Serenissima could not.

In order to be approved, each new School had to present a statute, known as the Mariegola, to the Council of Ten, which contained the rules that guaranteed and regulated the entire congregation.

The Schools were structured according to a hierarchical scheme where a figure called Guardian Grando presided over them. Then there was the Bank, a governing body made up of about fifteen people, and the Chapter, into which the brothers converged.

Precisely because of their internal configuration, the Large Schools, unlike the Small Schools, had at their disposal a large amount of capital deriving from the donations of the brethren, testamentary legacies and offerings. This overall patrimony allowed the Scuole Grandi to construct prestigious buildings for their headquarters. Thus the brothers, great patrons of the arts and art lovers, employed the greatest architects, painters and craftsmen of the time, thus contributing to increasing the artistic heritage in the buildings. 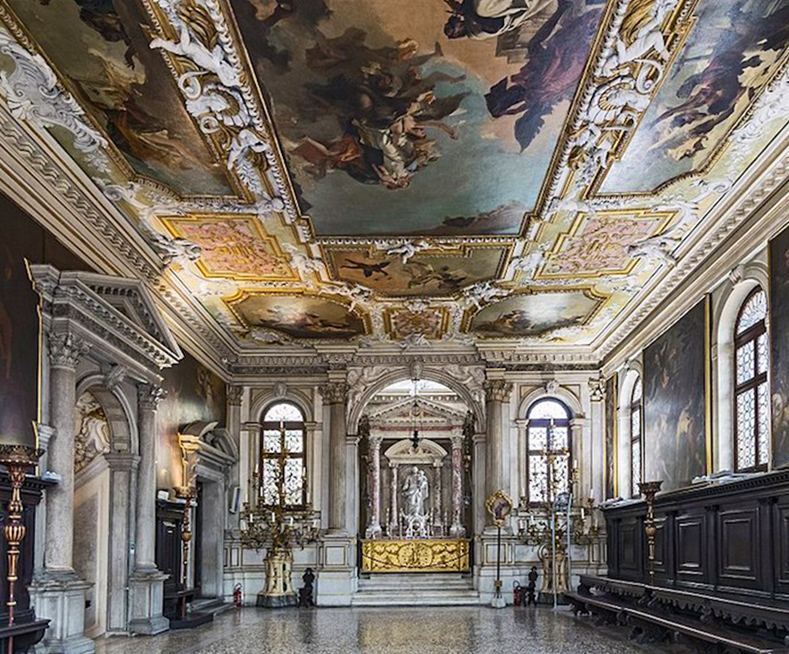 The situation for the Schools began to change in 1797 with the arrival in Venice of the French army led by Napoleon Bonaparte and the decision by the Maggior Consiglio to end the Republic. The new pro-French government, however, did not last long as Napoleon had to hand over power to the Austrians, who remained in power in Venice until 1805, when they were defeated and supplanted by the French. From that year onwards the changes in the city were remarkable. The new government had a republican and secular vision, certainly not a catholic one. Several religious buildings were demolished, including Sansovino's church in San Gemignano for the erection of the Napoleonic Wing. The Schools also suffered a similar fate, i.e. they were closed and all their property became State property. Although some of the latter were taken to France, others, such as land and buildings, remained, for obvious reasons, here in Venice.

Today, there are seven Scuole Grandi in Venice, but only four of them are active, namely the Scuola Grande of San Teodoro, San Giovanni Evangelista, San Rocco and Carmini.

It is interesting to note that, although the Schools have represented and still represent a very important historical, social and artistic part of Venice, they are still not very well known to most tourists.

I therefore hope that this article has managed to arouse your curiosity enough to want to explore a Venice that is a little hidden, but full of wonders!