Torcello: the origins of Venice

In the North-Eastern part of the Venice Lagoon, not far from Burano and Mazzorbo, there is a truly enchanting island rich in history: Torcello.

A magical place where you can discover the origins of Venice and relive an atmosphere of other times, between nature, silence and art.

About ten kilometres from the city, however, Torcello is inextricably linked to the main town on the lagoon because it is here that everything originated.

The history of Torcello

There are testimonies, arrived thanks to the archaeological campaigns of the early sixties, which tell us the existence of a settlement in Torcello already in the years when the nearby Altino flourished, therefore in the first century of the Roman Empire. The archaeological finds found on the island are precise in this regard because they date a stable occupation between the 1st and 2nd century A.D.

Already in Roman times, in fact, according to some studies, the lagoon area in front of the mainland was used for economic activities and livelihoods such as fishing and salt production.

At a certain point history shows us the beginning of the decline of Altino and the real birth of Torcello as a town.

We know in fact that in 452 A.D. the invasions of the Huns of Attila forced the inhabitants of Altino to abandon their city and find refuge in the islands of the Lagoon. Compared to the past, however, today it is thought that the passage of the population from the mainland to the lagoon area did not happen so immediately: it seems that when this happened, the bases had already been created to make possible the transfer of the population from Altino to the islands.

The information does not run smoothly through time. What is certain, however, is that in the  7th century A.D. the population in Torcello became more numerous. This is well known because some reclamation and embankment works were carried out with the creation of pilings, terracing and firming. These interventions made possible the creation of an urban structure, thus transforming the existing settlement.

Traces of vineyards and orchards also date back to this same period, thus showing an agriculturally active Torcello. However, it was not the only activity present on the island. Thanks to some discoveries we also know that there was a glass workshop here.

The development of this island immersed in the lagoon can certainly be included in the political projects of the Byzantine era that provided for the strengthening from the military point of view of what had remained under the control of the Empire after the rise of the Longobards.

In this same period there is also evidence of the growth of other already existing centres, such as Grado and Equilio, as well as the foundation of Eraclea and the creation of the castrum that would later take the name of Rivoalto, the future Rialto.

Where does the name Torcello come from, whose first testimony appears in the agreement signed on 23 February 840 A.D. between Venice and the Holy Roman Empire?

The origin of the name Torcello is not univocal. For a long time it was thought to derive from one of the oldest gates of Altino, located on the western edge of the Roman city with the aim of defending the island of Torcello.

Among other interpretations we find "torre- cielo"(tower-sky) perhaps due to the fact that from a distance you can see the bell tower rising to the sky. Some etymological hypotheses instead connect the toponym Torcello to the rural world with "troculum", press, or "tursa", bundle of hay.

The island had a strategic position in the past and with the islands of Mazzorbo, Burano, Ammiana and Costanziaco formed the bridgehead of Venetian trade towards the Adriatic Sea.

From the political-administrative point of view, in the period of greatest splendour, when Torcello reached even 20000 inhabitants, the island was ruled by two councils with a ducal gastaldo and then a podestà.

The proximity with the flourishing Venice, however, led to the decline of the island from the 15th century. To make things worse were also the continuous plagues and the impaludence of this strip of land with the consequent lack of healthiness of the place.

With the decline of Torcello the buildings went to ruin or were dismantled by the Venetians who used the building material and bricks for new constructions in their city.

The city practically disappeared, but the diocese of Torcello, although it moved to the island of Murano, managed to survive until 1818 when it was suppressed. At the same time the cathedral became a simple parish.

Interesting in this regard is the testimony of the pastoral visit in 1822 of Patriarch Giovanni Ladislao Pyrker, who personally witnessed the decadence of the island, which had become unhealthy and poor. At that time, in fact, the population had fallen to just 80 inhabitants, all dedicated to viticulture, according to documents.

The population decreased further during the 20th century and today, in 2020, there are only 11 people living in Torcello.

What to see in Torcello 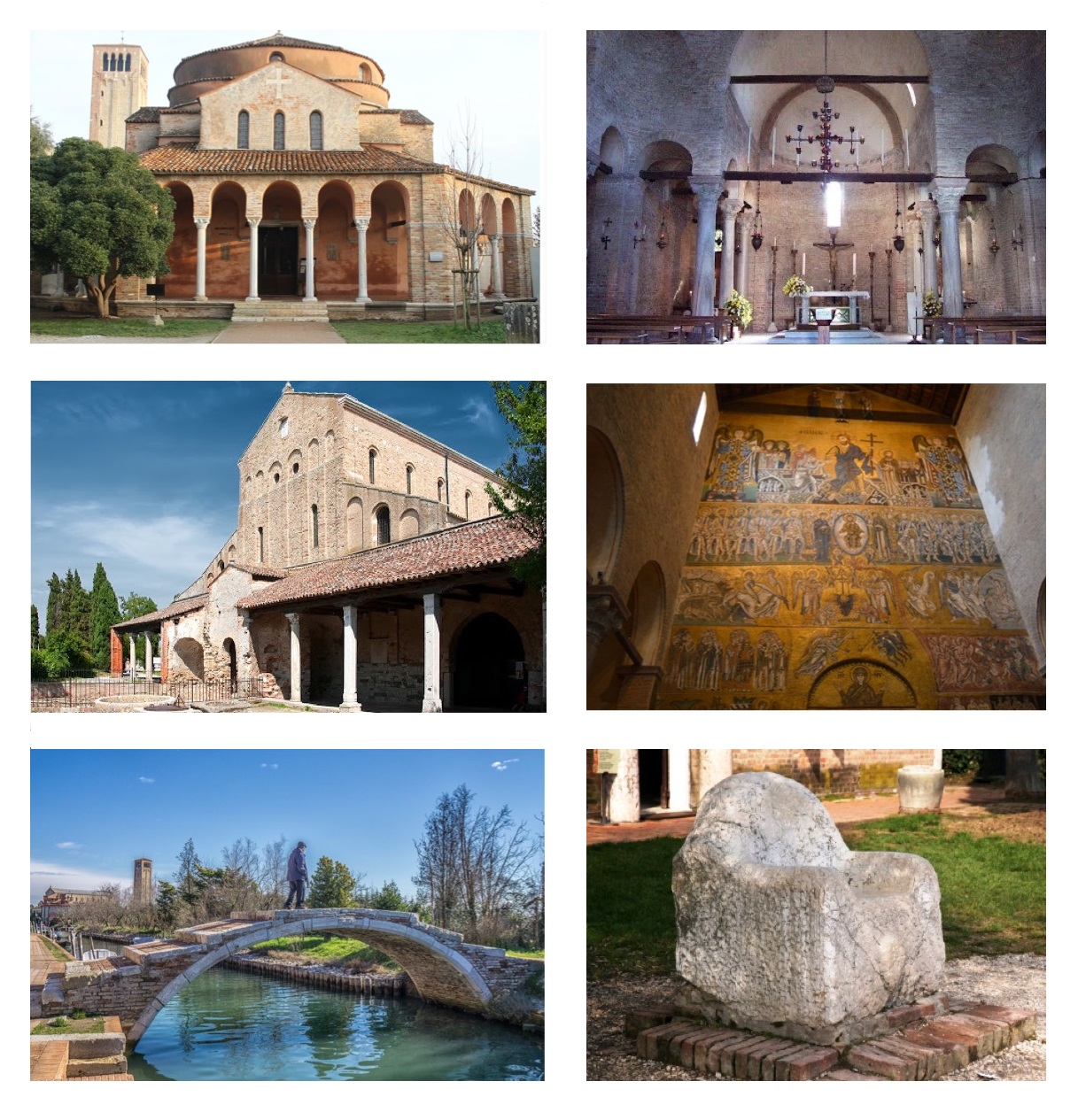 The decline of the island, and the consequent dismantling of the buildings to make building material, also led to the disappearance of most of the evidence of the buildings of the period of greatest splendour.

What remains today, however, is extremely interesting to understand how this strip of land lost in the lagoon was rich and interesting from an artistic and architectural point of view.

Walking along the island of Torcello here are the major points that you can see:

Once the cathedral of the diocese of Torcello. It is located next to the church of Santa Fosca, the foundations of the baptistery dedicated to St. John and what remains of the old town square. The building has a basilical plan and is an example of Venetian-Byzantine style. Not far away is the bell tower, a landmark for those who are in the northern part of the lagoon because it is visible even from a great distance. Renovated around the 1000 A.D., the Basilica took on the architectural form that we still see today. Externally what characterizes this building are certainly the particular windows with shutters in stone slabs. Inside the church instead of great impact is the western wall that corresponds to the main entrance. Here, in fact, there is an enormous Byzantine mosaic depicting the Last Judgement: a work of great size and complexity that is certainly what most attracts the visitor's attention. Above the main door, at the same level as the scenes depicting Heaven and Hell, there is a lunette with an image of the praying Madonna, a motif that we find also in the apse of the Basilica of Saints Mary and Donato in Murano.

The church of Santa Fosca

This is located next to what remains of the ancient city square, the Basilica of Santa Maria Assunta and the remains of what was once the baptistery. We know that a church with this name already existed in the first half of the 9th century, but we know nothing about the aesthetic appearance of the first building. We do, however, know its function as a reliquary. It was then in the 12th century that the building took on its present appearance: it was rebuilt to house the relics of the martyrs Fosca and Maura. Externally it has a portico that surrounds the building on five sides with marble columns and capitals decorated with an architectural motif that can also be found inside the building. The interior is Greek cross-shaped, on three naves with apses covered by a circular dome. The visible decorations can be traced back to an art that is very much influenced by the Byzantine style.

It contains archaeological finds that bear witness to the long history of the island of Torcello. In 1870 the then Prefect of Venice Luigi Torelli bought the fourteenth-century Palazzo del Consiglio in Torcello and restored it, thus preventing its degradation and abandonment. Two years later the entire collection of finds found in Torcello, on the adjacent islands and on the nearby mainland were donated to the Province of Venice. Thus the provincial museum was born. Today the collections are divided into two adjacent buildings. The archaeological section of the museum is housed in the Palazzo dell'archivio, where the archive, later dispersed, of the Bishopric of Torcello was once kept: a typical public palace of the 12th century, it has a loggia with four pillars supporting the façade which is decorated with a Venetian-Byzantine three-mullioned window on the upper floor. The collection includes discoveries ranging from prehistoric times to the early Christian period with artefacts of different types such as tableware and objects of ornament and personal use. From the Roman period, on the other hand, it is possible to see figured bronzes of a sacred nature, amulets, keys, rings, toilet objects and much more. The medieval and modern collection, contained in the Palazzo del Consiglio, presents documents and works mostly related to the history of Torcello, dating from the 6th to the 19th century. Here we find many stone artefacts and architectural fragments that bear witness to the Byzantine influences present in the lagoon and the subsequent Western decorative models that took the place of the previous ones. Among the most interesting artefacts are the mosaic fragments from the 12th century from the Basilica of Santa Maria Assunta, collected during the 19th century restoration works and the gilded silver altarpiece of the same building. Among the paintings we can admire icons and paintings on wood from the Veneto area as well as paintings on canvas from the school of the painter Veronese once contained inside the church of S. Antonio which was destroyed. There are also documents relating to the civil and ecclesiastical history of the island to testify to the intense social life. Among these is the manuscript volume of the Torcello Statute.

The throne of Attila

Between the Basilica of Santa Maria Assunta and the church of Santa Fosca there is a clearing and here is the famous "throne of Attila", a stone seat that legend has it belonged to the Huns' king. There is no visitor in Torcello who does not pose to take a photo sitting on it.

Once in Torcello, reaching the area of the two sacred buildings and the provincial museum from the vaporetto stop, you will come across this bridge which crosses an internal canal and which preserves the characteristic shape typical of the ancient Venetian bridges, without parapets: together with this, there is only one other example in the whole Lagoon, Ponte Chiodo del Sestiere di Cannaregio. To give its name Ponte del Diavolo (Devil's Bridge) a legend linked to the sad story of love and death: a sweet girl and a young Austrian soldier in love, and their love hindered by her noble family who came to kill the boy. The young girl then turned to a sorceress to allow her to find her beloved, and she asked for the intercession of the Devil, who managed to make the two lovers meet again and make them run away together. But you know, the Devil does not give nothing for nothing, and in return he asked for the souls of two children.The sorceress promised the passage of those little souls every December 24th for 7 years, but her sudden death prevented her from respecting the pact. And so every 24th of December the Devil wanders across that lonely bridge under the guise of a black cat in search of his young souls.

Torcello is a magical island. What you notice as soon as you land is the silence and the huge green spaces. A place where you can spend a few hours away from the chaos and breathe in a long history that, although it has not left many tangible evidence, still gives us the extraordinariness of a timeless landscape.