Venice and its ‘caskets’: the bell towers

Venice is a flat city, it has no great altimetric changes in its territorial conformation. The buildings are rather low, never exceeding 3 or 4 floors.

Yet in this scenario, always very suggestive, break into the elements that for their daring heights impose themselves as protagonists of the Venetian skyline interrupting its horizontality making it more dynamic, making space between red roofs and fireplaces: I'm talking about the bell towers.

Of various styles and shapes they can be described as caskets that keep inside them the bells that interrupt the quiet of the city with their sounds, marking in this way the life of the inhabitants and tourists, today as yesterday

What has just been said is illustrated in a poem by Dante Del Zotto, dated 1912 and dedicated to the master professor Vettor noble Morolin, whose subject is the Bell Tower of San Marco. The poet describes it as a privileged observation point on the lagoon, a lookout tower, but also a lighthouse that indicates the direction to follow to get to the city for foreigners arriving from the sea:

What a place you've got up there.

Sora de ti if you enjoy the view

"...come back to you here in the midst of no more

To tell you what comes from the sea, from the gallows,

The bell towers in Venice between construction difficulties and collapses

There is no doubt that the reflection of the buildings in the waters of the lagoon is an element of great charm, however, it is a symbolic testimony of a territory, the lagoon, extremely particular and very difficult. Venice is a city built on water, and This has always involved considerable difficulties in the construction of buildings; problems related to the poor bearing capacity of the soil and the few soil stratification that have led in several cases to the collapse of the foundations of the buildings. This is even more true for the bell towers which, due to their structure that concentrates a very heavy mass in a reduced base area rather, are subjected to a high stress of the materials: this is the reason why in Venice it was decided to build according to a horizontal rather than vertical trend. It is therefore no coincidence that the history of these structures is punctuated by several earthquakes, collapses, demolitions and demolitions. 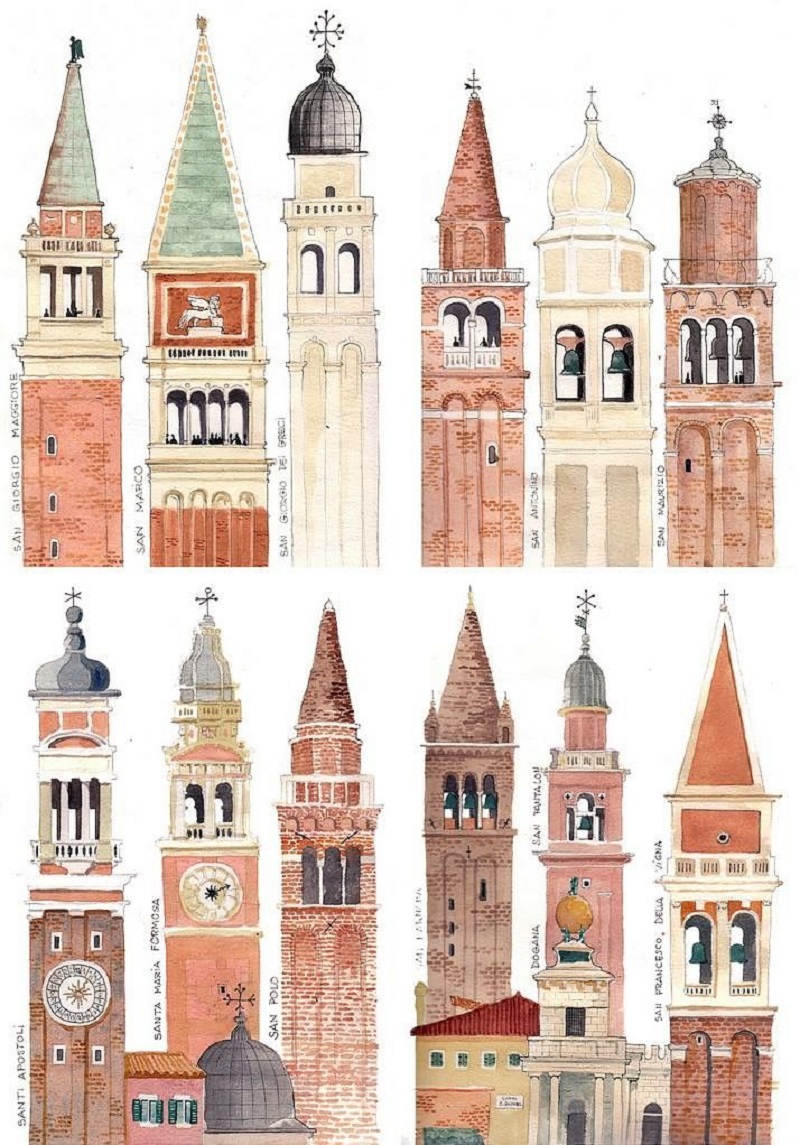 The Bell Tower of San Marco: el paron de casa (the landlord of the house) 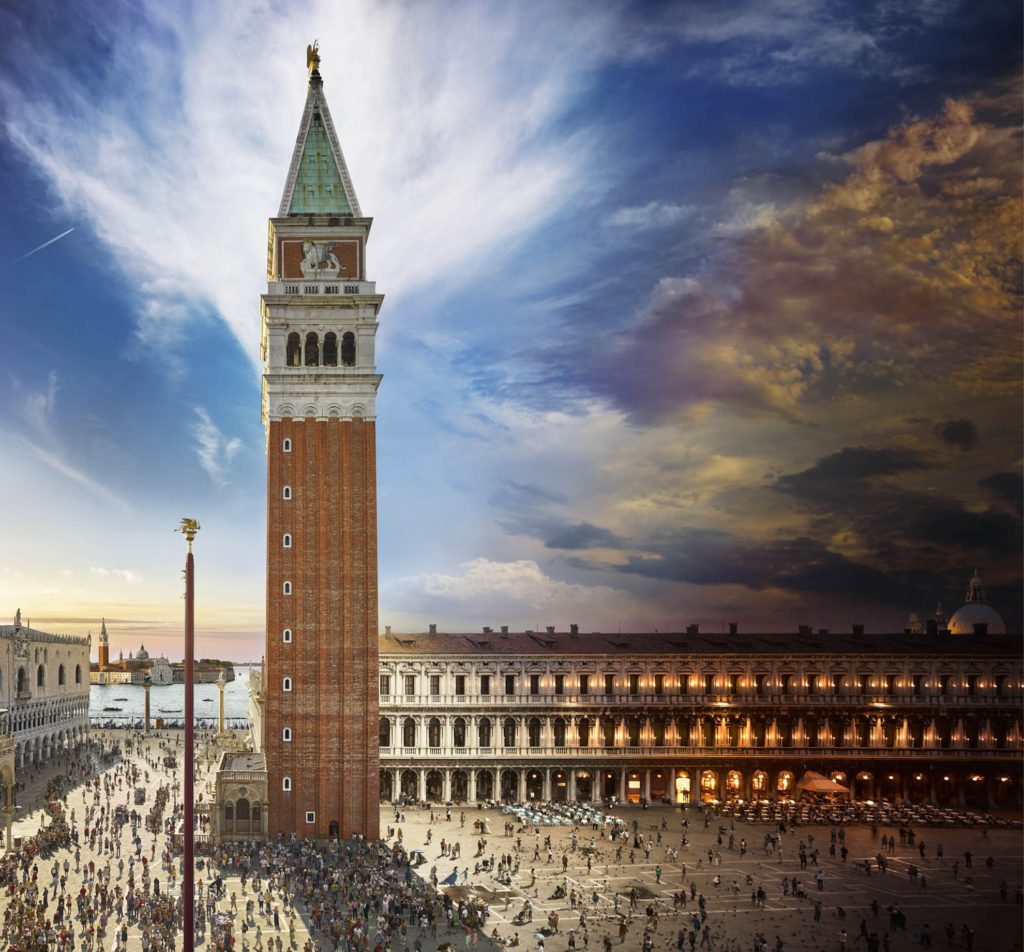 Not an exception is the Bell Tower of San Marco which, although it is the fourth bell tower in Italy for height and the oldest in the lagoon city, has experienced several vicissitudes, until the collapse.The construction of el paròn de casa (the landlord of the house) as the Venetians like to call it, began in the ninth century during the Doge of Pietro Tribuno and had as its initial destination that of lighthouse and watchtower. It is composed of a reed of red bricks 50 meters high and with each side of 12 meters, above which is located the arched belfry which, in turn, at its top is covered by a cube on whose facades are depicted two lions in motion and two female figures representing Justice, then ending with the pyramid-shaped spire, covered with green copper blades, surmounted by the golden statue of the archangel Gabriel that rotates to indicate the direction of the wind: The Bell Tower thus reaches a total height of 98.6 meters, becoming the true emblem of Venice. At its base, on the side facing the basilica, there is the Loggetta of Sansovino, a splendid small building realized by Jacopo Sansovino around the middle of the sixteenth century: of classical taste, it is thought as a triumphal arch richly decorated and in which there are 4 bronze statues representing Minerva, Mercury, Apollo and La Pace. 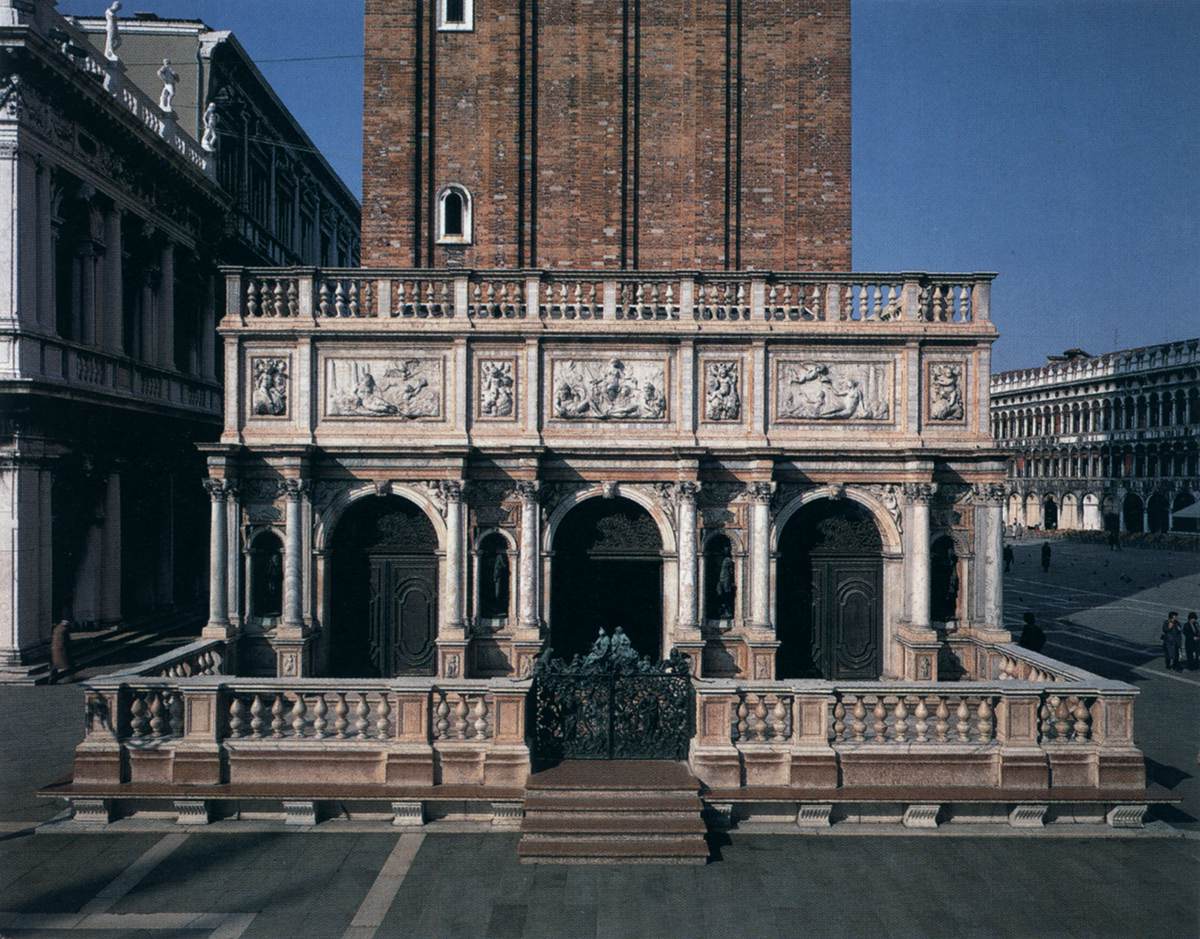 This is the bell tower of today, which dominates St. Mark's Square undaunted and proud.

The Venetians turned to their Bell Tower and to the unanimous cry of "as it was and where it was" began the process of reconstruction that led to the construction of a structure practically identical to the one that collapsed: a delicate work of reconstruction that then passed in all the books on the history of restoration. The work, which was commissioned by Luca Beltrami, lasted until 1912.
And the Bell Tower of San Marco is the casket of 5 bells that have always marked the life of the city since it was built.

The hanging and chopped bell towers

The Bell Tower of the Church of Santo Stefano, located in the Sestiere di San Marco, is with its 66 meters among the highest in the City. It has a Romanesque structure with three arches and an octagonal drum at its top. Like most of the bell towers in Venice, the bell tower has had several renovations due to the fragility of the soil of the entire lagoon city. In particular, during its last reconstruction, there was a subsidence of the foundations that caused its inclination. However, this did not stop the works at the end of which the slope had reached a good 2 meters.
In spite of the importance of this cliff, the bell tower was not subject to special checks.
Following the fall of St. Mark's Bell Tower in 1902, straightening and containment measures were taken, which included five buttresses built according to the technique of metal reinforced masonry.
Subsequent studies highlighted how, as a result of these measures, the construction had undergone an extremely rapid increase in slope. From that moment the structure was monitored with greater precision and the metal elements, now worn out, were repaired and then joined by new elements. This last intervention led to the stabilization of the Bell Tower, whose slope has not been increasing since 2003. 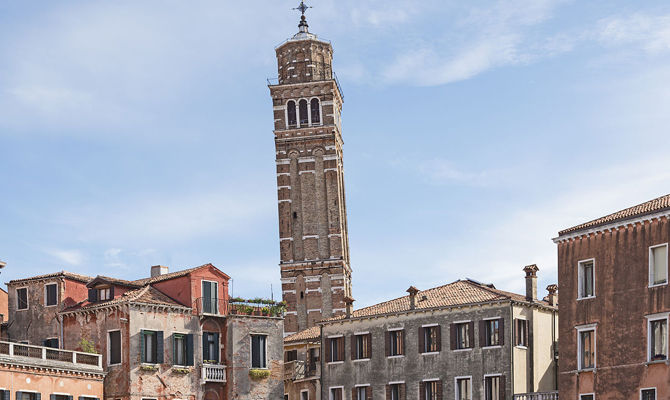 But the bell tower of Venice that holds the record for the slope is that of San Giorgio dei Greci, located in the Sestiere di Castello. The birth of the Church first, in 1536, and the bell tower then, in 1587, is due to the presence of Greek communities in the City. The bell tower was built by Bernardo Ongarin on a project by Simone Sorella and stands in the churchyard of the church, in the center of which we can admire a beautiful well. 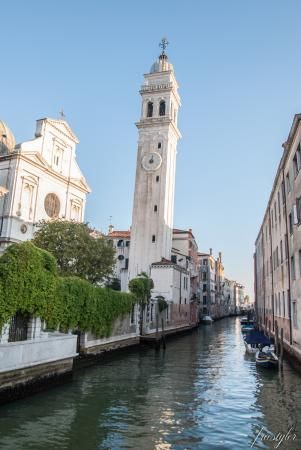 The last bell tower can be admired in one of the many islands of the city, Burano. This marvel of the lagoon, very characteristic for its lively colors, is further enhanced by the bell tower of the Church of San Martino. 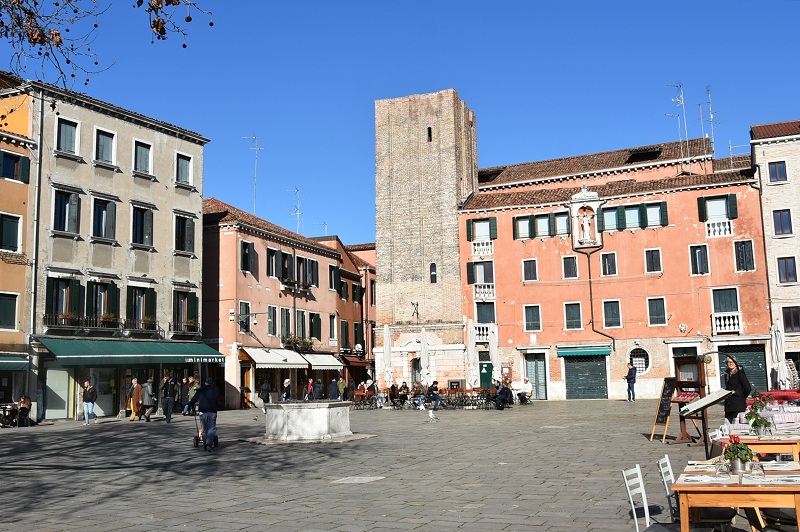 The bell towers between sea, art and music 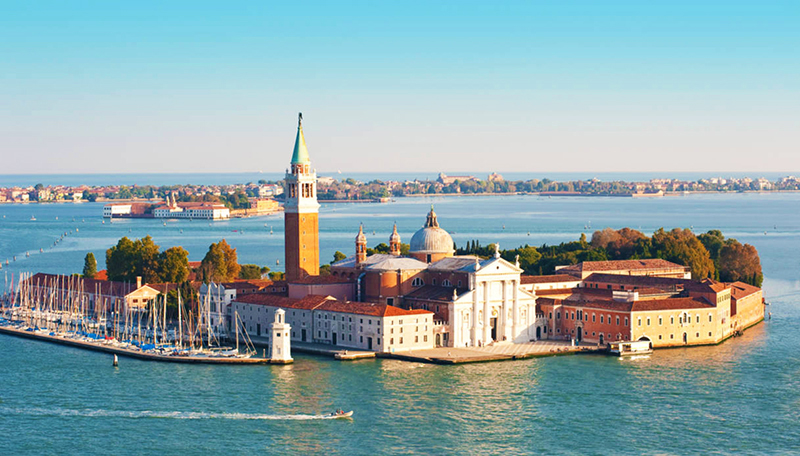 Unlike the Basilica to which it belongs, built by Palladio in 1566, it was designed by Scalfarotto and erected in 1726. It is very reminiscent of the older brother of St. Mark's Square: like him, it has a red brick reed rising up to the white Istrian stone bell cell, surmounted by a serliana on each side with simple and austere lines. From the overlying loggia with a balustrade with columns starts the final element: a circular drum on which rests the conical pyramid with the angel that closes the structure, dominates and protects the Lagoon. This of San Giorgio is one of the few bell towers in Venice on which you can climb: take advantage of it because from its top the view is truly priceless and surprising.
The bell towers of Santa Maria della Salute are located in Sestiere Dorsoduro in the area of Punta della Dogana and are, like their basilica, an excellent example of Baroque style, the work of the architect Baldassarre Longhena who masterfully mixed elements of late Renaissance style, with clear references to Palladio, to the new Baroque elements that brought a rich and opulent language to the Lagoon, cutting through the classical expression that dominated at that time. In this case we are in front of a unique example in the whole city: the Basilica della Salute in fact does not have a bell tower, but rather a pair of bell towers that are positioned in the rear, flanking the apse area externally. Their regular shape is made of Istrian stone with a fluted barrel and a bell cell identified by exquisite round mullioned windows with an arched tympanum above. I conclude the constructions with two perfectly hemispherical domes with an upper globe that find an excellent balance with the large dome that surmounts the central body of the church. 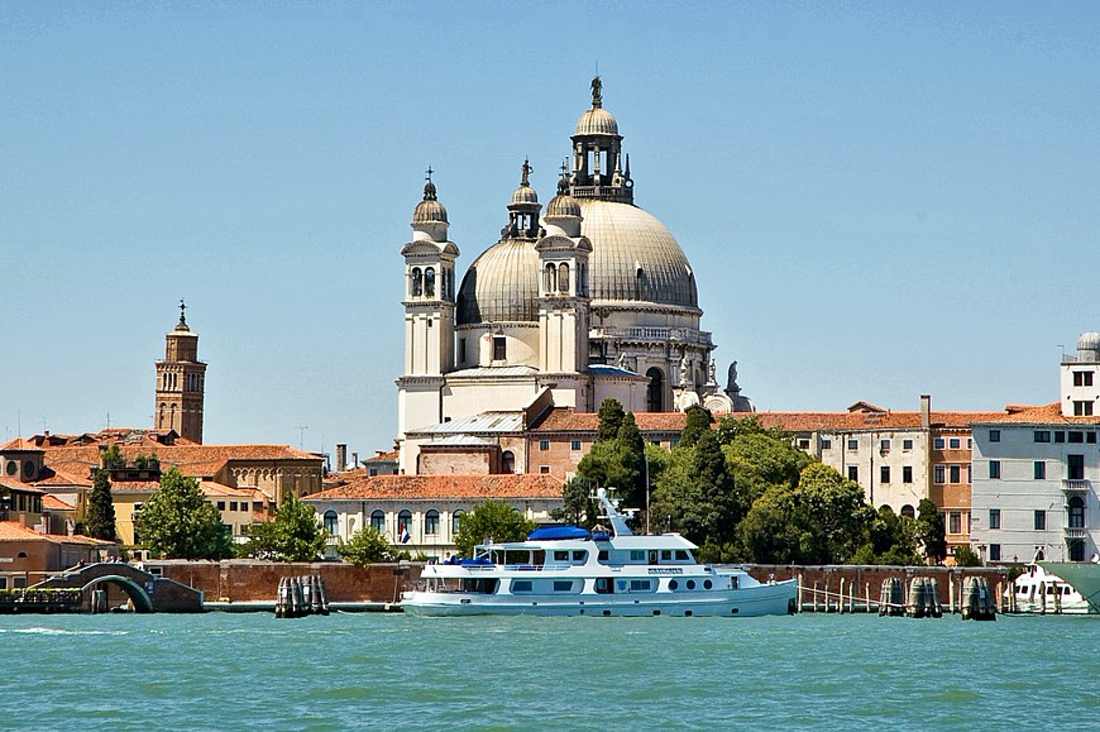 In Sestiere San Polo, near the Rialto Bridge, there is the Church of San Giacomo or San Giacométo, in Venetian. The structure is one of the oldest in the City and dates back to 1152, although several legends want it already existing since 421. In Gothic style, home to the Museum of Music in Venice, where Antonio Vivaldi's instruments are kept, the church has a bell tower different from those examined so far. It, in fact, is called "a vela" because it presents itself as a thin structure placed as a sail, precisely, on the building itself.

An elegant marble structure supports the terminal part with the statue of the Saint. But the real protagonist is the large round clock that marked the hours of the frenetic life that animated the commercial area of Rialto.

In short, we can say that the bell towers of Venice always remain wonderful caskets that behind their undoubted beauty contain truly fascinating stories!

Remember to walk with your nose up!