Ea fritoa, the sugary queen of the Venetian Carnival Carnival is celebrated and... ...fry!

The culinary side of the crazy Venetian party has only one name: fritoa! Sweet, soft, sugary, it is the undisputed queen of carnival festivities, so much so as to become the "National State Sweet" of the Serenissima.

But you know, Carnival and everything that revolves around Venice is very serious...

From the ancient Romans to the fritoleri: the origins of venetian fritoe 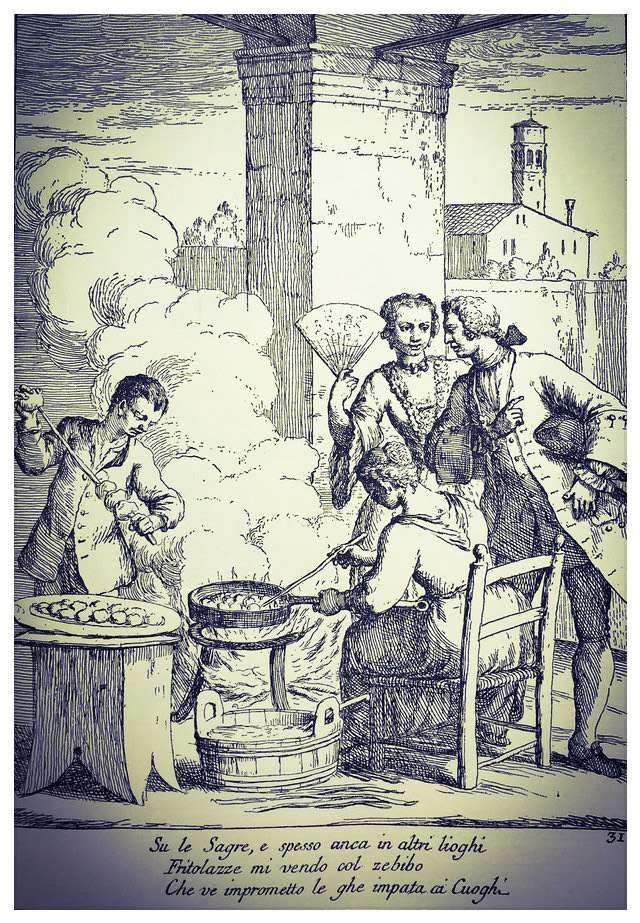 It seems that fritoe, a dialectal term for fritters, were born in Roman times: they used to prepare little morsels called globulos during the period of Saturnalia, the ancestor of the modern Carnival. It was a very simple preparation obtained by kneading together durum wheat and cheese, from which small balls were obtained, then fried in pork fat and flavoured with honey.

These delicacies in Venice underwent a considerable variation: the introduction of sugar. Considered a very precious spice and consequently very expensive, sugar was imported into Europe from the Eastern lands by the Serenissima of Venice, the absolute sovereign of trade with those distant lands and which had entire plantations on the island of Cyprus. From here the raw sugar was brought to the homeland to be refined and then spread to mass consumption.

From here it is easy to guess that the Roman preparation of pancakes was strongly rooted in traditional Venetian gastronomy, also because the conspicuous use of sugar was a manifestation of wealth, opulence and commercial power.

Eggs, flour, sugar, raisins and pine nuts: these are the original ingredients of the ancient recipe of the Serenissima, well preserved in a fourteenth century document kept in the Biblioteca Casatenense in Rome.

The sweet fritters in Venice became a serious matter: prepared exclusively by fritoleri, artisans grouped together in the seventeenth century even in a Guild, La Maddalena, which had as many as 70 components. Each of them owned a wooden shack and exercised their profession in the street, in a specific area of the city. The fritoleri were well recognizable, with their white apron, the pastry board for kneading, the large frying pan and the strange tool made with a jar perforated in several places containing the sugar that they sprinkled on the hot pancakes, arranged on large decorated plates. Think of the scent that spread in the calli and campielli...

Today as then, pancakes fill the windows with pastry shops and ovens throughout the city in view of Carnival and beyond, becoming a symbol of the entire Venetian confectionery tradition.

Pancakes are small, soft, fragrant, golden, sweet, and after eating them they leave your fingers covered with grains of sugar: try it, one pulls the other!

Let's make fritoe: the original recipe of the Serenissima

Would you like to fry and enjoy the fritos? Here is the recipe kept by all the Venetian grandmothers!

The first thing to do is to rinse the raisins and then soften them either in warm water or in a little rum. Then dissolve the yeast in a couple of tablespoons of warm milk. Sift the flour on a pastry board, add the sugar and form the classic fountain. In the middle add the egg, the melted yeast, the baking powder, the soft butter and the grated lemon rind well washed. Knead well and add the lukewarm milk a little at a time depending on how the dough behaves: it must be rather thick, not liquid, so pay attention to this phase. Drain the raisins well and add them to the dough: be careful not to add too much liquid! Also add the pine nuts slightly toasted beforehand and the pinch of salt. Place the mixture in a bowl and cover with a cloth. At this point you have to let the mixture rise until it doubles, and it will take several hours for this: don't be in a hurry! Once the rising time has passed, it's time to fry! Place a high-sided pot on the fire and pour in plenty of peanut oil: remember that frying is better and healthier if you fry in plenty of oil! Wait until the oil heats up and make sure it does not exceed 170°. Procurate two tablespoons moistened with water, with one collect some dough and with the help of the second pour it into the oil forming a ball. Do not add too many fritoe in the oil otherwise the temperature will lower and the result will be a very bad frying! When the fritoe will have a rather brown colour, drain them well and dry the excess oil on absorbent paper. Then, the best part: dip the fritoe still hot in caster sugar.

No, the best part is to eat them hot and fragrant!

Happy Carnival to you ;-)