Sarde in saor: origins, recipe and a gourmet version

Origins and history of sardines in saor

Undisputed protagonists of Venetian tables, sardines in saor is one of the oldest dishes of the gastronomic tradition of Venice, the one that best interprets the strong relationship that the Serenissima had woven with the distant eastern cultures.

Yes, because let's not forget that the Republic of Venice was the queen of the seas weaving important and profitable commercial networks especially with the Levant. And the merchant ships returned home loaded with aromas and spices, products unknown until then that characterized the lagoon gastronomy very much.

So it was also for sardines in saor, a perfect balance between fish and spices, between sweet, sour and salty, between the West and the East. This famous saor not only recalled oriental atmospheres, flavors and aromas, but it was also an infallible method, let's say brilliant, to preserve the fish for a long time, in an era devoid of refrigeration systems and canned foods, fortunately! This sauce, very tasty because saor in Venetian means its own flavor, allowed the conservation of the fish thanks to the combination of two fundamental elements, the onion and the vinegar. The vinegar, which gave the acid component, allowed bacteria to be kept away; the onion, on the other hand, avoided scurvy due to the lack of vitamin C. The sweet and aromatic components were oriental, and were given by honey, clove almonds, cinnamon, coriander and raisins. So the sardines were served in saor.

This tasty concoction apparently had an illustrious ancestor, the cisame, dating back to the fourteenth century, which is a sweet and sour dressing used to flavor meat and fish.

Over time, the recipe has changed, or we could say that it has been slimmed down, having lost that strong flavor given by the massive presence of spices. But already Carlo Goldoni, Venetian writer and playwright, in his comedy "Le donne di casa soa" of the eighteenth century tells of a recipe of sardines in saor very similar to today's, that is made exclusively of sardines, onions, vinegar, raisins and Pine nuts.

Thus the Venetians made a virtue of necessity. A method that of the saor of which also sailors forced to stay away from home for long periods was used: on their merchant ships they united the spices that they transported to their homeland from the East and the fish, fruit of their work, of the catch of the day. In fact the sardines in saor were called "food of sailors and escort in the mainland". Consistent, isn't it ?!

The dish soon became a real specialty and was consumed in the everyday life of the streets and banquets, but also during the religious holidays that, as we know, always have a culinary aspect. It soon became the dish offered by the sailors to the patriarch during the feast of San Pietro di Castello, which coincided with the recurrence of the victory of the Venetians over the Uric Tartars. And it is still so today, there is no party or modern festival in which the saor is not tasted.

But are you intrigued? Has your mouth been watering? Then let's try to prepare these special sardines!

Let's try to cook sardines in saor: the traditional recipe 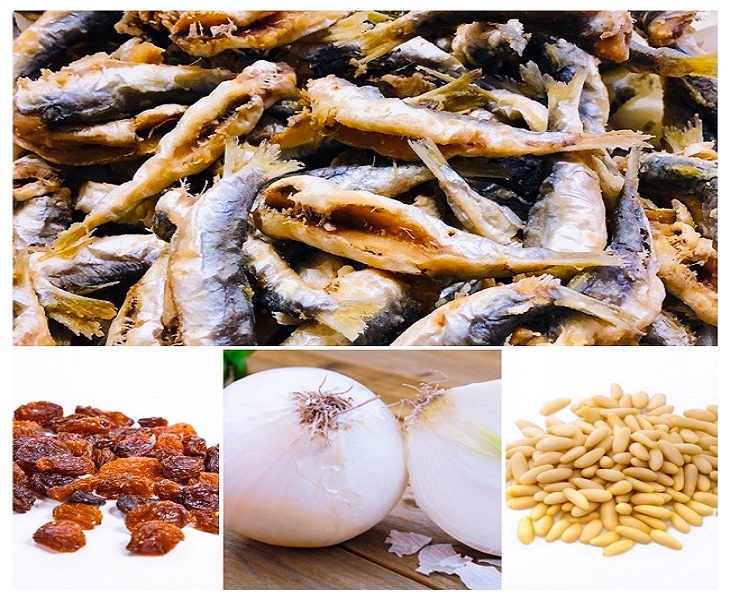 It is not difficult to cook sardines in saor, a simple and tasty dish.

However, when preparing them you have to come to terms with the classic, almost secular, diatribe on the relationship between quantity of onions and fish. We say that the most classic tradition, that of history and that of Venetian grandmothers, which is much more intransigent, foresees a ratio of 2: 1, ie onions must be twice the weight of the fish. Simple.

Yes, but there are two or three other rules to be respected: the fish must be strictly fresh and it is sardines, large, full-bodied and fleshy; the onions must be the white and round ones of Chioggia, beautiful desserts; the vinegar must be of white wine, the good one. And I know, but this is a traditional recipe and as such is rigorous.

Well, let's get the apron on and cook!

• Sultana and pine nuts as required

• Salt and pepper to taste

Clean the sardines well by depriving them of the head but without opening them. Flour them and fry them in plenty of seed oil at a temperature. Leave them on absorbent paper to lose excess oil. Clean the onions from their outer part and from the waste. Cut them into very thin slices. Cook them gently in a pan with high sides in extra virgin olive oil. When they begin to brown, add the sugar spoon and the vinegar. Let it evaporate over high heat and then cook over a low heat for a long time. Do not rush, they must become soft and beautiful. Add the raisins previously found in a glass of water, and the toasted pine nuts. Season to taste with salt and pepper. At this point it is necessary to combine the preparations. Take a baking pan or a container with high sides and make a first layer with fried sardines. Add a second layer with the onion saor. Continue then with the sardines and then with the onions, in layers, until exhaustion. Let it marinate for at least a day. This marinating will make the fish tasty and soften its bones, so do not be afraid to eat them. Consume the dish at room temperature, accompanied with grilled polenta slices.

The gourmet version of Hostaria OsottoOsopra Oh well, but are you in Venice and don't want to enjoy this specialty so rich in history?

I know a special place that prepares a gourmet and delicious version. What are you doing, coming with me?

It is the Hostaria OsottoOsopra of Calle San Pantalon, born by chance from the chance meeting between friends: they meet in front of a cafe, they chat and dust off that dream in the drawer to open a restaurant together, a place to make good food. No sooner said than done. Thus was born the Hostaria OsottoOsopra, in the heart of the youngest and happiest Venice, a stone's throw from Campo Santa Margherita.

The idea, however, was to create a different venue, which would not be harnessed by the usual tourist dynamics of fixed-price menus of dubious quality, but which could offer something different. They give life to a place where one feels at home, as if one were going to dine with old friends who know us well, who recalls the atmosphere of the old Venetian taverns, once called Malvasia, where quality wines were made and the shadows of wine were sipped in the companies.

The environment of the Hostaria is warm and welcoming, modern and with a strong personality: the warmth of wood is the master, with the furnishings and beams that characterize the ceiling, and that enhance and stand out on the exposed red brick walls, that give that pleasant feeling of interior / exterior: all very typical, in perfect Venetian style.

The equipment is elegant but young and modern, which lets you feel at ease without any forcing or redundant refinement.

But why is it called OsottoOsopra? It might seem something strange and sophisticated but instead the answer is very simple: the place winds on two floors, giving you the possibility to taste the kitchen or directly overlooking the street or overlooking the street from the street, being able to choose between the hall of below or the upstairs room. Simple, isn't it?

Ok, the story is interesting, the place is beautiful, the name is nice but now we come to the juice and we talk about cooking, which is the best thing about this Hostaria. The gastronomic proposal of OsottoOsopra certainly derives from the Venetian culinary tradition, because the dishes are made with the ancient and authentic recipes of the grandmother's notes, but wink at the modernity, giving interesting combinations and combinations of unusual textures, capable of enhancing the palate . The combination of research and modern preparation techniques is the watchword for these young chefs who masterfully know the raw material and tradition to then be able to create something new and modern, without ever losing sight of the taste and flavor of the dish: nice yes, but above all good!

At OsottoOsopra I suggest you try their sardines in saor, on the other hand we're here for it, right? They are traditional but licensed, because they are paired with pink pepper berries that give a new flavor, and a black sauce. Delicious, perfect balance on the palate.

I recommend another typical dish but revisited in a modern key: the artichoke base with golden goat cheese on carrot and ginger cream. Creamy, crunchy, delightful.

We still remain in the old Venetian kitchen with the bigoli with the press in anchovy sauce and the rice with cuttlefish ink: they will also be traditional but they are of an incredible good. Long live the tradition!

I am passionate about creamed cod and here, in addition to the classic version on croutons, they propose it paired with an agretti risotto creamed with a broth that seems to be a secret from the chef. Wonderful.

And then there are the pasta with fish or meat sauce, peoci soups and peverasse. Among the latter the menu offers the classic Venetian style liver, grilled fresh fish, Laguna fish specialties. But you can't not taste the beef cheek cooked for eight hours, glazed with Valpolicella and combined with a soft puree of turnip. So tender that you can eat with a spoon.

The wine list is interesting and wide, for any kind of combinations. At the end let yourself be delighted by the exquisite pastries, from the traditional with the tiramisu to the more modern one with cheesecake and panna cotta. All strictly homemade, like in the family.

The staff, young and cheerful, available and prepared will be at your disposal to satisfy requests and make you feel at home.

It is true, this Osotto Ossopra kitchen is gourmet, refined, good and beautiful in the dishes, but do not worry, the prices are reasonable, the line with the quality of the raw materials chosen for the preparations.

And if you visit the Hostaria for the first time you will be offered an aperitif. Nice is not it?

The Hostaria OsottoOsopra is just like at home, among friends. 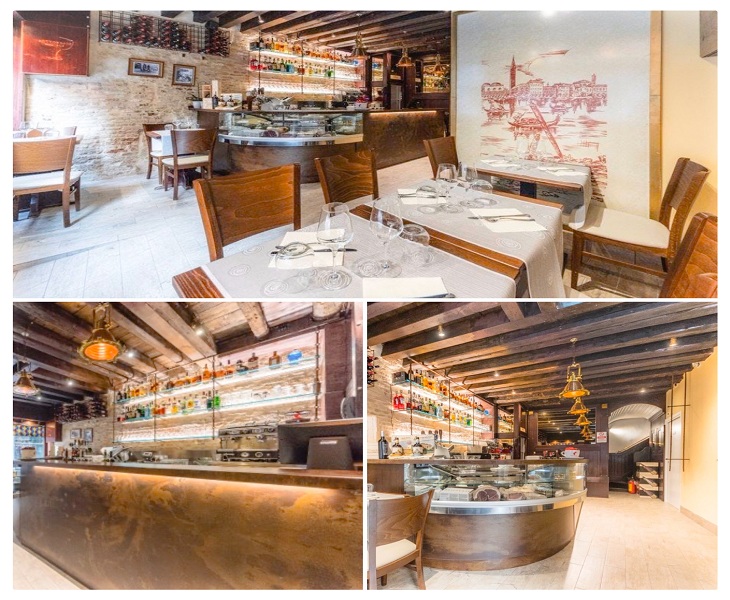