The castradina. Venetian tradition for the Madonna della Salute

The Madonna della Salute in Venice is also celebrated in the kitchen with the traditional recipe of castradina. A particular dish that you can find only in Venice and that, according to the custom, is not missing from the tables on November 21 for a reason that you will discover reading this article.

The Feast of Madonna della Salute is one of the most heartfelt by Venetians. It was born following the vow made by the city to the Madonna to put an end to the terrible plague that struck Venice between 1630 and 1631 and caused 47000 deaths, a quarter of the then population. As thanks to the Madonna for the end of the plague, the doge Nicolò Contarini and the patriarch Giovanni Tiepolo had the beautiful basilica we know built by Longhena in his honor.

Origin and history of castradina

Castradina is a traditional Venetian dish based on smoked and then seasoned leg of mutton and has a history that has its roots in the past.

In fact, we must go back many centuries when salted, smoked and sun-dried mutton meat was sold to Venetian ships passing through Albania and Dalmatia.

We know that the Venetians already knew the castradina in 1173 thanks to the words of the doge Sebastiano Ziani who mentioned it as "sicce vero carnis de Romania et de Sclavinia".

The story then tells us that during the terrible plague of 1630 the Dalmatians were the only ones who supplied food to an isolated Venice. In that period, therefore, in the city they ate mostly mutton and learned how to preserve it with salting.

As a tribute to the Dalmatian population, it was decided to introduce this dish into the Venetian tradition on the day dedicated to the Madonna della Salute, November 21.

Since the 17th century, therefore, castradina has become a food "de obligo su le tole, sia dei povaréti che dei siori, nobili o mercanti" (a must on the tables of both the poor and the lords, nobles or merchants).

The castradina to be prepared requires many hours of cooking, but this is not the only problem. Until a few years ago this type of meat had become almost impossible to find in Venice. Until 1914 it arrived in the city on the trabaccoli and Albanian tartanas flying the Turkish or Astro-Hungarian flag. It is known that it was even served directly from the boats that were moored right on the banks of the Schiavoni.

Luckily some butcher shops have started selling it again some time ago, even if it is no longer the one coming from Dalamatia or Albania.

It doesn't matter if it is the continuation of a tradition that has been going on for 400 years.

Preparation of the castradina. The recipe 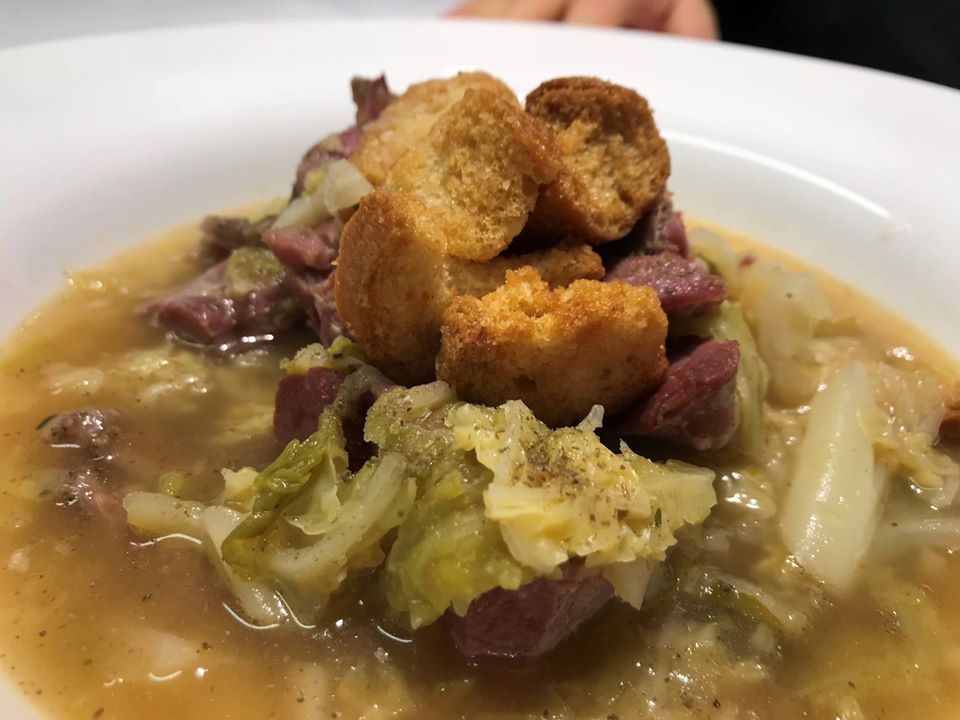 How is the castradina prepared?

Usually with castradina you prepare a very tasty soup with cabbage leaves and onions.

The recipe proposed here is castradina alla s'ciavona: this is how the inhabitants of Dalmatia were called. Have you presented Riva degli Schiavoni? It is so called because Dalmatian ships used to arrive along that shore. The procedure is taken from the book "A tavola con i Dogi" by Pino Agostini and Alvise Zorzi, a volume that contains stories and recipes of the most authentic Venetian tradition.

Preparation time: 4 hours of boiling time, plus half a day interval

Wash the leg of castradina, cut it into medium-sized pieces and place it in a large pot with plenty of cold water. Add the vegetables, peppercorns and boil for a couple of hours.

Leave to cool in boiling water for half a day, then remove with a skimmer all the fat that has coagulated on the surface. Add a couple more ladlefuls of water and put it back on the heat leaving it to boil for at least another two hours.

Remove the cooked castradina and serve it with "sofegae" cabbage, or cabbage leaves cooked over low heat for a couple of hours, seasoned with salt and pepper.

A curiosity about this recipe.

The castradina that came from Dalmatia or Albania needed a cooking time of 6-7 hours. It had a very strong flavor and to make sure that it lost its intensity, more pre-washes were done in warm water and the water from the first boiling was thrown away.

As for all dishes, castradina can be combined with a glass of good wine. The book "A tavola con i Dogi" recommends a Merlot from the Berici Hills or a Rosso Superiore from the Euganean Hills.

The Feast of the Madonna della Salute sees renewed year after year the vow made to the Madonna in '600.

Every November 21 some very heartfelt gestures are repeated by the Venetians. Cross the votive bridge, bring a candle to the Madonna, participate in one of the many masses that are celebrated and then sit at the table and eat the castradina. It means not only renewing a promise but also and above all keeping alive a tradition that is just as right to safeguard as much as the beauty of Venice.