I have always been interested in female figures, particularly those linked to my Venice, who were able to bring a wind of change to society.

In this article I am going to talk about a strong, determined, shamelessly self-centred woman who, with her 'imperfect' body, managed to assert herself by going beyond the aesthetic and behavioural canons imposed by society: I present Luisa Casati Stampa... Luisa Amman was born in Milan in 1881. Her mother, Lucia Bressi, was from Milan. Her father, Alberto Amman, from Monza with Jewish and Austrian origins, was a wealthy entrepreneur in the textile sector, who was awarded the title of Count by King Umberto I as a token of gratitude for having brought prestige to Italy with his production. Luisa and her elder sister Francesca's wealthy family had a comfortable life and a good education, but she found it extremely boring as she was taught at home by tutors, as was customary for wealthy families at the time.

From her earliest years of life and studies, Luisa showed a particular predisposition for the figurative arts, devoting herself with particular dedication to drawing. 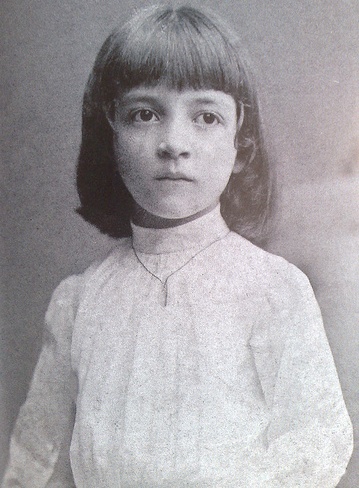 The monotony of the young girl's and her sister's lives was shaken by the early loss of both parents and the subsequent custody of their paternal aunt and uncle. The two sisters suddenly became the two biggest heiresses in Italy. Although she continued to lead a "normal" life, cultivating various interests, playing tennis and horse riding, I personally believe that this event laid the foundations for a profound change in the life of the young Luisa, who until then had shown an extremely delicate and fragile personality.

It was the year 1900, the year of the Universal Exhibition in Paris, an event that brought with it great cultural ferment and great novelties throughout Europe. It was in that year, when she was nineteen, that Luisa decided to get married, in line with the social customs of the time. She chose a man whose social position was superior to her own, Marquis Camillo Casati Stampa, and thus became Marchesa Casati Stampa. The following year she gave birth to her only daughter, whom she decided to call Cristina, in honour of Cristina Belgioioso, for whom she had a deep admiration.

Up to this point Luisa Casati's life had followed a rather linear course, and the mask of the typical girl from a good family that she had worn from the time she was a child until she decided to become a wife certainly obscured and prevented her true personality from emerging. It is no coincidence that soon the role of good wife begins to cling to her and her meeting with Gabriele D'Annunzio makes this dissatisfaction a point of breaking with her past.

After meeting D'Annunzio on a hunting trip, the Marquise undergoes a radical change, becomes self-conscious, but this time decides to show the world her personality. She began to change her look, cut her hair and dyed it a bright red. She begins to use powder to make her complexion even lighter and makes her large green eyes, the only feature considered truly beautiful by the aesthetic standards of the time, even more distinctive through a marked black make-up and the use of belladonna, which dilates her pupils. Her clothing also became increasingly eccentric. In short, Marchesa Luisa Casati Stampa created a veritable ritual that would lead her to transform her body into a living work of art. In those years, those of the Belle Epoque, she decided, on D'Annunzio's advice, to move to Venice, a city of timeless charm and therefore more in keeping with the Marquise's personality. She chose Palazzo Venier dei Leoni, now home to the Guggenheim Museum, as her new home.

Everything in her life was studied down to the smallest detail to create an allure, a style all her own. His new home is clearly no exception, populated with numerous exotic animals such as a boa, which he loves to wrap around his neck like a scarf; but also white peacocks trained to stay near the windows to be admired from the waters of the Grand Canal; albino blackbirds. But the animal that has perhaps remained most in everyone's memory is his cheetah, which he loved to lead on a leash during her nocturnal walks. Although calling them "walks" is a bit reductive and misleading, these night-time outings could be said to have been theatrical, with her dressed only in a fur coat, her cheetah wearing a collar adorned with precious stones that inspired a famous piece of jewellery by Cartier, of which she was a loyal customer, and lanterns carried by her servants that gently broke the darkness of the night.

All this, of course, framed by an exceptional theatre such as Venice, its calli and the splendid Piazza San Marco! 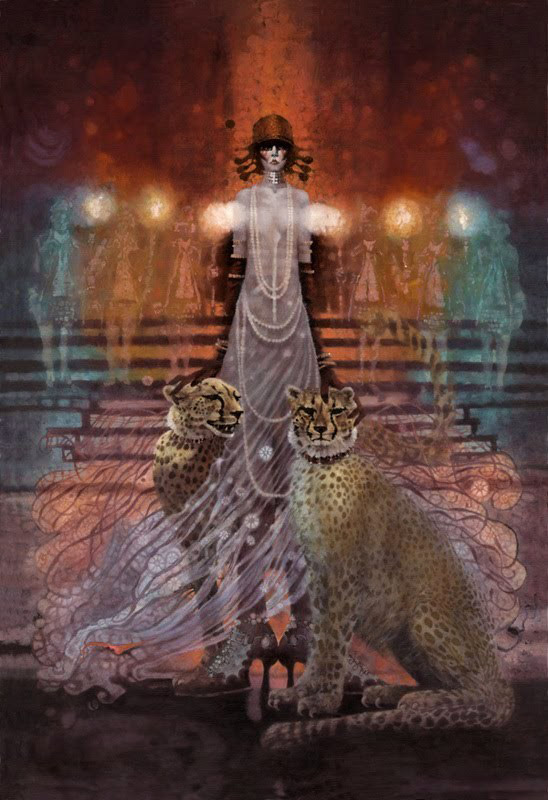 The Marquise, therefore, loves to show off without half measures and devises a thousand ways to do so. Her lifestyle was sumptuous, non-conformist and she made this clear during the numerous events she organised at Palazzo Venier where, among coloured lackeys and exotic animals, she danced the waltz, which was then forbidden in the capital (Rome), according to the Pope's wishes. But, of course, the focal point of these receptions was always her, bursting out in stunning gowns specially designed for her, such as the famous "Queen of the Night" designed by Léon Bakst.

To complete such an out-of-the-ordinary image there is her passion for the occult that leads her to organise black masses that are, however, more than theatrical performances to amaze and frighten the public.

In 1914 Luisa Casati Stampa obtained a separation from her husband, Marquis Camillo Casati Stampa the Marquise, and later, in 1924, became the first divorced woman of the Catholic religion. This undoubtedly helped to create for her an image of an out-of-the-ordinary woman that went beyond the imposed social models.

It was this uniqueness that attracted many artists, including D'Annunzio, who spoke of her as the only woman who had ever amazed him. He was certainly so fascinated by her that he drew inspiration from her for the character of Isabella Inghirami in 'Forse che sì forse che no'. In the course of their never-ending affair, he gave her various nicknames: the Divine, Mona Lisa, Domina and, finally, Coré, the goddess of the Underworld. From the very first meeting, a love affair was born between the two that was to last a lifetime.

The poet himself, recalling the Marchesa's departure for Saint Moritz, gives us an idea of how he was fascinated by Luisa Casati and how he was bound to her from the very first moment:

"I used to have breakfast alone with her. I think I was already in love with her, I certainly wanted her as much as ever".

On the occasion of his departure, he gave her an English bath brush and explained why he had given her such an unusual gift:

"It was a way of touching her from afar, with magic fingers". In 1923, the Marquise decided to buy a new residence in Paris and chose a manor house that had belonged to Robert de Montesquiou, Palais du Rêve. Once again, therefore, she chose to buy a very prestigious and obviously very expensive residence. In fact, Luisa Casati's weak point was her expensive lifestyle, which unfortunately led her to squander her wealth. In fact, the latter residence, together with all her furniture, is put up for auction. But here, too, the marquise's story is shrouded in a magical aura: among the buyers is Coco Chanel.

With debts of around 25 million, the Marquise, now in her fifties, decides to move to London to live with her daughter Christine, who is married to the Earl of Huntingdon.

At this stage of her life Luisa Casati Stampa becomes a faded image of herself, the nocturnal walks she often lingered on when she lived in Venice are now a distant memory. Now the marquise presents herself to her public in clothes that have worn out over time and uses shoe polish to emphasise her look.

She died in June 1957 of a cerebral haemorrhage and is buried in Brompton Cemetery. Her effects include a black cloak with leopard skin edges, her beloved stuffed dog. Her eyes are made up as always, in black, and are adorned with her much-loved false eyelashes. On the gravestone, at the behest of her granddaughter Moorea, is Shakespeare's description of Cleopatra in 'Antony and Cleopatra': The living work of art

The Marquise's is the story of a woman who, at a certain point in her life, decides to create a version of herself different from the one that had emerged in the first part of her life. Whether this was a way of hiding her weaknesses or whether it was simply an expression of her true personality we are not sure. I believe, however, that the relationship between personality and the mask one wears is a two-way street, i.e. that inside and outside influence and condition each other.

It is a fact that Luisa Casati Stampa sets herself a goal in life and, in fact, achieves it.

She cultivated relationships with influential personalities of her time and attracted artists such as Giovanni Boldini and Erté, from whom she commissioned works in which she was, of course, the subject. 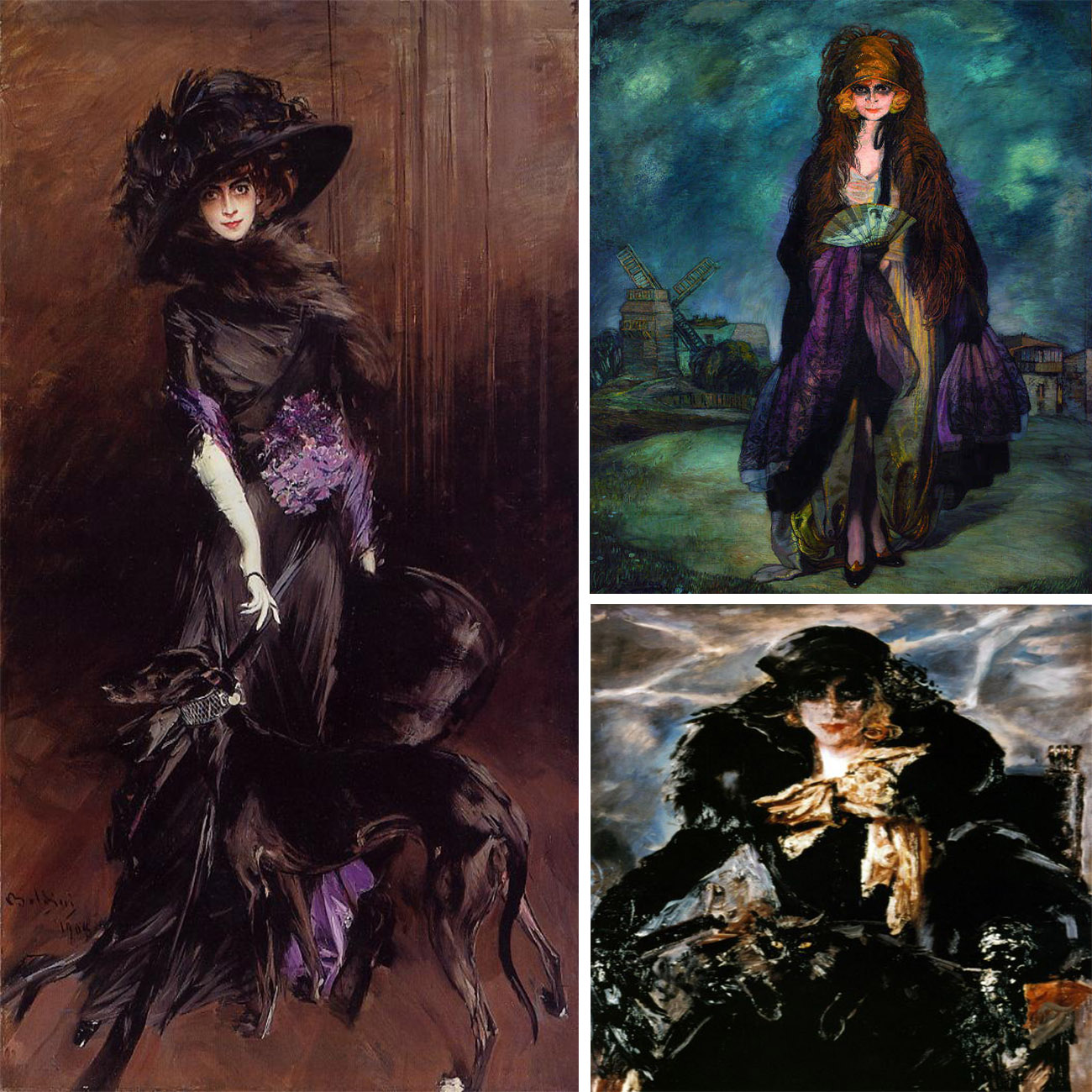 She has a great passion for fashion and her strong and eccentric personality allows her to wear sumptuous clothes. Her style is eclectic and ranges from peplums, headdresses that would put the Queen Mother to shame, turbans, feathers and animal prints. Her great passion for masquerades completes her deliberately theatrical persona. He loves to impersonate women and men he has admired and appreciated, such as Elisabeth of Austria and Cesare Borgia.

It is no coincidence that the great stylists of the time created clothes especially for her. Among them were Paul Poiret, Jean Patou, Léon Bakst and Mariano Fortuny.

One of the marquise's most memorable gowns is the one made by Bakst in 1922, which went down in history as 'Queen of The Night'. A dress covered entirely in diamonds and which took about three months to make. But since "diamonds are the girls best friends", Luisa's passions also include jewellery. Her favourites? René Lalique and Cartier.

The Marquise's charisma was so powerful that her image was an inspiration not only in her own time, but also in subsequent eras.

Have you ever seen the Cartier advertisement in which a woman has a panther on a leash? Well, the famous French fashion house drew inspiration from her, the Divine, as D'Annunzio liked to call her.

More recent inspirations can be found in singer Achille Lauro's performance at the Sanremo Festival, or John Galliano's creations for Dior in 1998 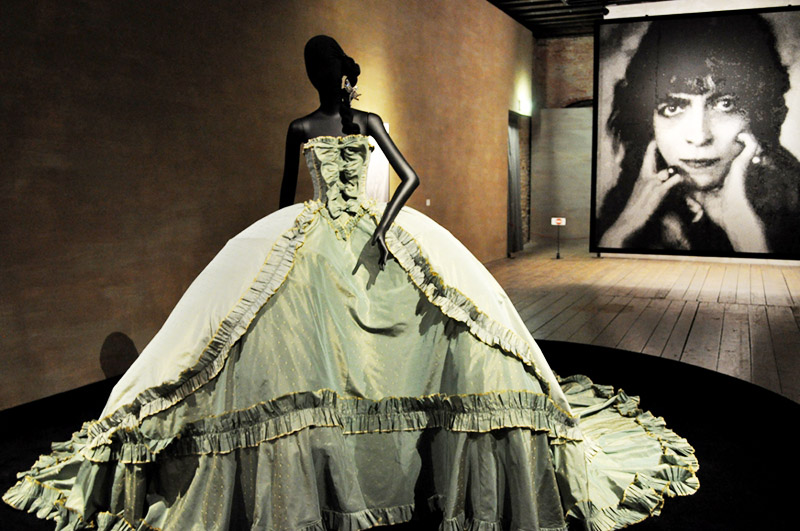 but certainly the most evocative for Venice was the Chanel fashion show for the 2010 cruise collection created by the legendary Karl Lagerfeld presented in a prestigious hotel on the Venice Lido. 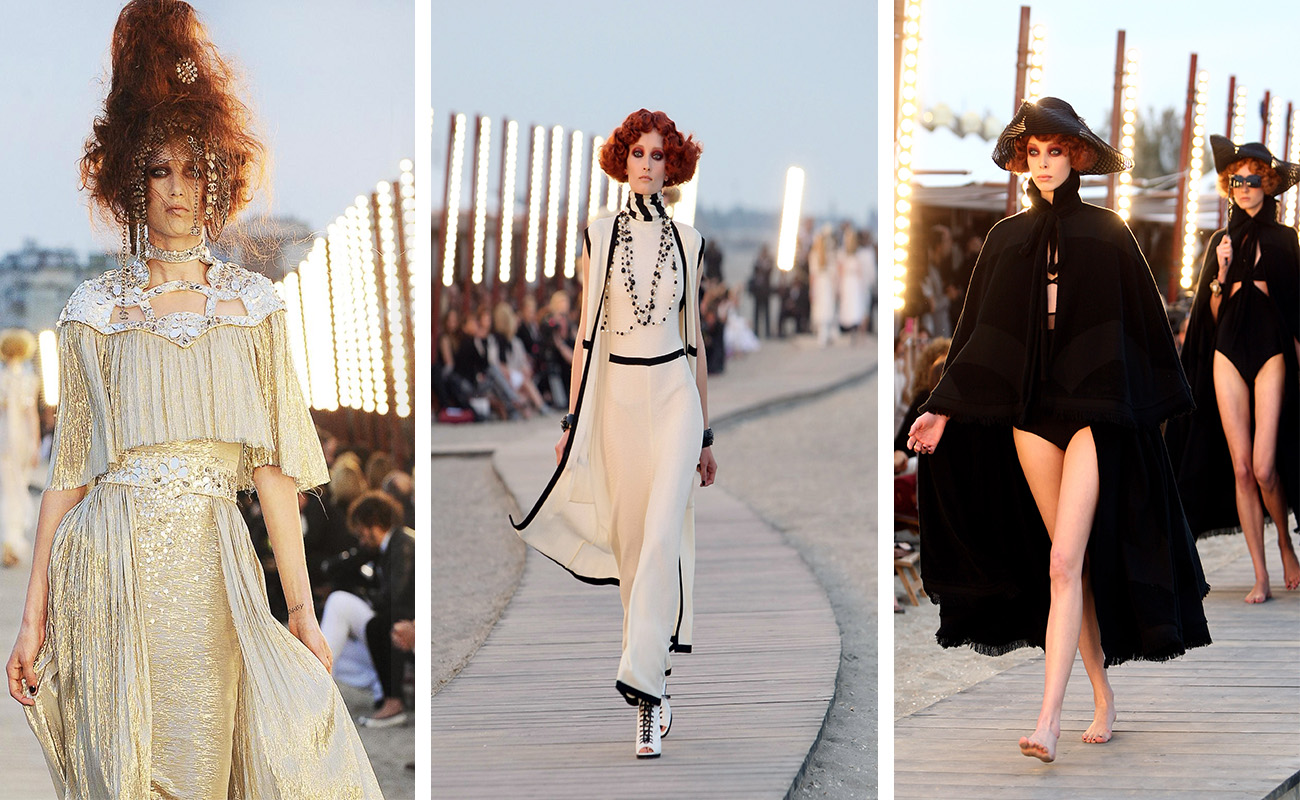 Obviously, for such a theatrical life, the Divine Marquise could not fail to be represented in this sphere as well, with, for example, Paul Osborn's play 'The Countess' in 1965.

In short, Luisa Casati Stampa, a slender figure with an irregular face, managed to fascinate the whole world, demonstrating how personality can cancel out and, why not, even shape the conception of what is considered beautiful.