The history of the Venetian navy: the Bucintoro and the Amerigo Vespucci:

In order to narrate the origins of the Venetian Maritime industry, one must take many steps back to the 7th century. The influences of the naval architecture of the Venetians derive from the Roman and Byzantine civilizations, on which it was first dependent and then allied, which were distinguished by their great ability to design, build and develop models of boats useful both for trade and war. At the time, shipbuilding did not have a clear distinction between merchant and war craft: they had to serve whatever their purpose.

Venice was full of private shipyards in which boats were assembled: the shipyards were known as "squeri", also used for the construction, maintenance and shelter of both sailing and rowing ships. In 1204, so, the power of the Venetian fleet reached the East with the conquest of Constantinople that baptized Venice as the largest and most imposing maritime power in the world thanks to a dense network of bases, colonies and commercial moorings: thus was born the myth of the Serenissima. Huge naval caravans known as "muda" were organized every year, unlike private merchant enterprises, they were organized by state bodies: these provided a large number of ships that left for Africa and the East to carry out trade. Among the most popular destinations for these caravans were Syria, Egypt, Romania but also northern Europe. Following the fall of Constantinople in 1453 and the beginning of a long conflict with the Turks for the defence of maritime possessions, between the 15th and 18th centuries, Venice developed a war fleet destined to become one of the most important naval powers in history, mainly thanks to the skill of its workers, divided between carpenters, sailmakers, caulkers and gunsmiths.

In the course of these centuries, starting from the 12th century in particular, the Senate of the Republic of Venice decided to build a state squadron to carry out the work of the private ones. Thus was born the Arsenal, the beating heart of the Venetian navy in which all types of workers and activities related to the fleet were carried out in total dedication. The Arsenal was organized as a modern factory, with an assembly line layout in which each department worked independently and with a rigid organization to ensure the efficiency of the shipyard: in the periods of greatest splendour an exorbitant number of workers worked there, between 1000 and 3000.

During these years new models of ships were designed, such as the brig, the galleon, the drunkard and the bastard galley, armaments were perfected with the addition of firearms. It was during the Battle of Lepanto, one of the most famous and bloody naval battles in history, that the galley made its debut, a ship much larger than the others and armed with numerous artillery units. In the following years made their debut the galleon, the fragata, the vessel. The Armata Grossa was formed, which included brand new ships and "prisoner" ships of war, brought home for maintenance work and made available to the navy. The Venetian fleet was the most powerful in the world, known as the Armada in Republican times, but during the 18th century its strength began to decline. In spite of the wealth of the Serenissima, the navy was unable to renew the technological structure of its ships, which became increasingly old and worn out. Moreover, the commercial axis moved to the Atlantic area, where Venice was unable to impose its dominion. Admiral Angelo Emo tried to rebuild the navy on the model of the British one, improving the practice, the armament, the organization and the equipment of the navy, which had been surpassed by France, Spain, England and the United Kingdom. The final fall came with the conquest of the Republic by Napoleon's troops in 1797.

Yesterday and today the great protagonists of the seas are the ships, two in particular that between past and present have witnessed the greatness of Venice and Italy in the maritime field. We are talking about the Bucintoro and Amerigo Vespucci.

Bucintoro: the sumptuous vessel of the doges

Bucintoro was the galley of the Doges of Venice during the Republic era. The origin of the name derives from "golden buzino", which in Venetian means "golden burcio", which in turn derives from the Latin "bucentaurus", that means a mythological creature half man and half bovine. The Bucintoro house was the Arsenale, in which the galley was located during the year, as evidenced by the plan of Jacopo de Barbari of 1500. The fame of this large boat is due to the famous ritual of the "marriage with the sea" that had takes place every year on Ascension Day, now known as the Feast of the Sensa: during the ceremony the Doge embarked on the Bucintoro and sailed in the name of the maritime domain of Venice, among a solemn procession of boats. The celebration, with a propitiatory and sacred character, was established in the year 1000 to commemorate the conquest of Dalmatia.

Over the centuries numerous models of of this sumptuous vessel were designed and built, and one of the oldest of which we have news is the thirteenth-century Bucintoro mentioned in the promise of the doge Renier Zeno.

The Bucintoro was built as a large flat-bottomed boat to sail the shallow waters of the Venetian Lagoon, governed by 21 oars on each side. It was richly decorated with gold details and inserts of precious purple red fabrics, while the upper part had an arched structure and vaulted roof, where the Doge and his retinue were housed. Its connotative elements were certainly the size and the imposing golden figurehead on which was placed a scenographic golden sculpture depicting Justice with sword and scales, emblem of strength and honesty. At the stern, a pulpit-shaped terrace had been built to allow the Doge to look out during his processions and rites. In the following centuries, the vessel was improved and became increasingly sumptuous. The last, largest and most magnificent galley was commissioned in 1719 and completed in 1729.

It was of course the subject of numerous Venetian paintings and vedutisti of the eighteenth century. Its tragic end came, together with that of the Republic in 1797 when it was destroyed by French troops: it was set on fire with a public stake on the Island of San Giorgio on 9 January 1798, as a contempt of Napoleon for the Venetians and the much-hated power of the Serenissima. From its remains was made loot of gold and silver.

In October 2004 the Bucintoro Foundation started a project for the faithful reconstruction of a new Bucintoro, but since 2016 the works are stopped due to lack of funds.

Amerigo Vespucci: the most beautiful ship in the world. 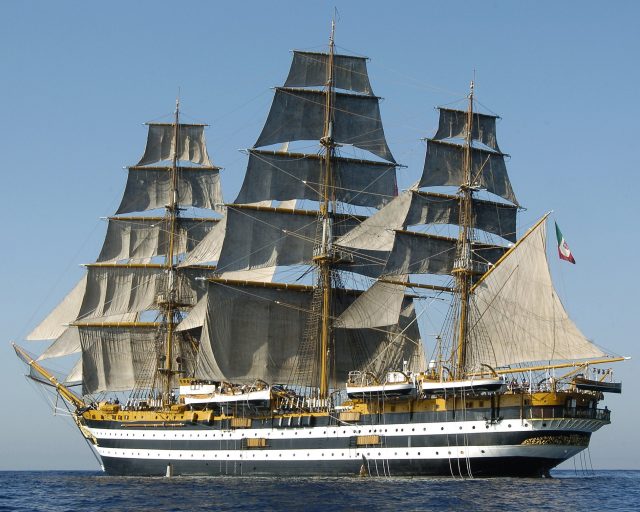 The legacy of the Venetian Navy was acquired first by the Royal Navy during the Kingdom of Italy and then by the current Naval Corps. The Italian Navy was established after the Second World War, on the structure of the Royal Navy and following the sale of some naval units by the United States of America.

The symbol of the Navy is undoubtedly the legendary sailing ship Amerigo Vespucci. Designed by Francesco Rotundi and built as a training ship for the training of the Navy's official students, the sailing ship was established and launched on February 22, 1931 in Castellammare di Stabia, near Naples, home of the royal shipyards. The ship, an imposing sailing ship, is nicknamed the "Queen of the Seas", is 101 meters long and 15 meters wide with a steel hull nailed 82 meters. It is a motor sailboat and has 3 vertical masts with 26 sails that allow it to travel at a cruising speed of 10 knots motor and 16 knots sailing. Magnificent and elegant is the hull with its sides in alternating bands of black and white where the portholes are located, which are very reminiscent of the cannon batteries of the boats of other times. Enriched with sophisticated gold decorations, such as the friezes on the bow and the arabesque on the stern that make it a unique specimen, as well as the figurehead that guides the boat in its crossings and depicts the explorer to whom it is dedicated, Amerigo Vespucci. The interiors are entirely made of various types of wood, such as teak, ash, mahogany and holy wood, which give light thanks to their shine. The interior space is divided between the officers' quarters, the Council Room, the Dining Room with the bar and the students' quarters: all places enriched with photos and banners that tell the story of this extraordinary sailing ship. Between 2013 and 2016, major modernization works were carried out with the installation of more engines and new technological equipment, while preserving its tradition.

The Amerigo Vespucci is one of the oldest vessels still in operation, which allows it to receive honours from all the other military ships it crosses, and is considered the most beautiful ship in the world, not only by Italians. Currently it is used for the training of students but over the years it is often used as an ambassador on the sea of Italian art, culture and engineering. The sailing ship has travelled around the world, from New Zealand in 2002, to the Athens Olympics in 2004 and the commemoration of the Battle of Trafalgar in 2005, and it is an itinerant symbol of Italy's grandeur. One of the characteristics of the sailing ship is the perseverance in maintaining the old traditions.

The history of our country is linked to the sea in an indissoluble relationship. Venice and the ships that have sailed the seas are the historical testimony of this. This history can be retraced today at the Navy's Naval History Museum. Located in Campo San Biagio, very close to the Arsenal, once the granary of the Serenissima, it is considered the most important of its kind in Italy. Inside and in the Padiglione delle Navi, is preserved a rich and important collection of ships that have made the greatness of Venice and beyond.