The legend of the red stone of Venice

Among the calli of the Castello district, not far from the Arsenale complex, it is possible to come across a single red stone in the city's pavement, a stone that you absolutely must not step on if you do not want to be beset by misfortune. Today we will discover the legend surrounding this particular stone, a legend that dates back to the 17th century.

The Portico of Corte Nova, in Castello In the Castello district, the least visited part of the city, near the Church of San Lorenzo, there is the portico of Corte Nova, also known as the "portico of the plague". Located between Calle Zorzi and Calle della Corte Nova, the portico also serves the function of a chapel. Inside, in fact, there are two small shrines made of marble and Istrian stone. One shrine bears a painting depicting the seated Madonna and child, the other a painting of the Madonna della Salute.

Between the two shrines there are four paintings depicting the most important moments in the history of the plague epidemic that struck Venice in 1630, from the beginning of the epidemic to its defeat. According to the legend, the area remained immune from the plague, as the plague was stopped by a sacred icon of the Virgin Mary, which was placed inside the portico at the time. To commemorate the event, a red stone is placed between the paving slabs in the exact spot where the plague was stopped.

Since then, tradition has it that it is best to avoid this red stone "like the plague". The red stone in the portico of the Corte Nova is one of the many Venetian superstitions, but let's find out more about the legend of this slab. 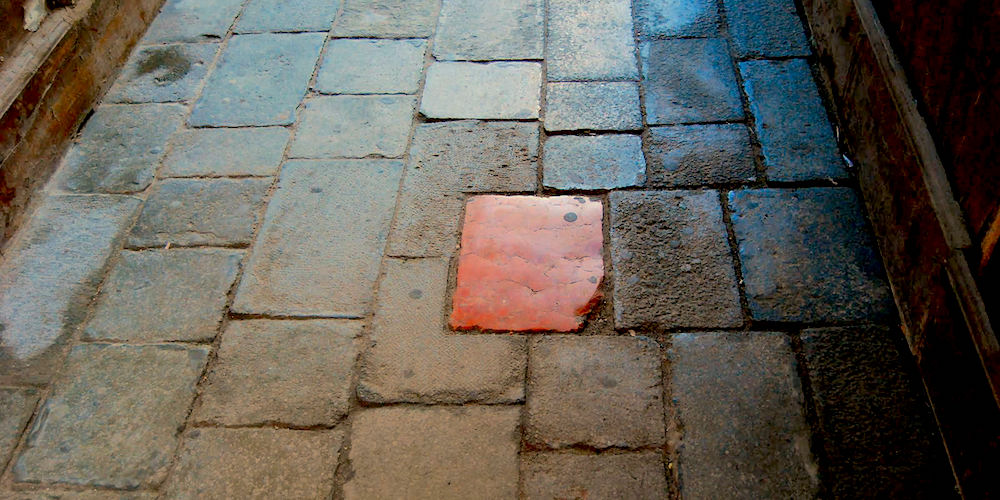 When walking through the streets of Venice, you may come across particular slabs on the pavement that you should absolutely stay away from. One of these slabs is the red stone of the portico of Corte Nova, or "portico of the plague". The stone in question is made of red Verona marble, and the colour is no coincidence, as at the time red symbolised death. In order to avoid being beset by misfortunes, this slab must not be stepped on.

In 1630 Venice was hit by the Black Death, a terrible epidemic that killed about 150,000 people, 40% of the population at the time. The plague spared no one except the residents of the Corte Nova area. In this part of the city the plague did not enter, and according to the legend, it was all thanks to the portico located between Calle Zorzi and Calle della Corte Nova.

Legend has it that a woman named Giovanna, who lived in the area, had a dream in which the Virgin Mary appeared to her and told her to paint a picture of her holy figure together with St Roch and St Sebastian. The painting was to be placed inside the portico, as instructed by the Virgin Mary. Giovanna did exactly what the Madonna asked her to do and placed the painting in the place chosen by the saint. Thanks to the holy image, the plague was stopped at the exact spot where the red stone, the symbol of the defeat of the plague, stands today.

Obviously, from then on, all Venetian citizens passing through the area avoided stepping on this red stone, fearing terrible bad luck and misfortune.