In the historic centre of Venice you will not find the common street signs we are all used to, but there are the nizioleti. The typical Venetian street signs are one of the symbols of the unique toponymy of the Serenissima. 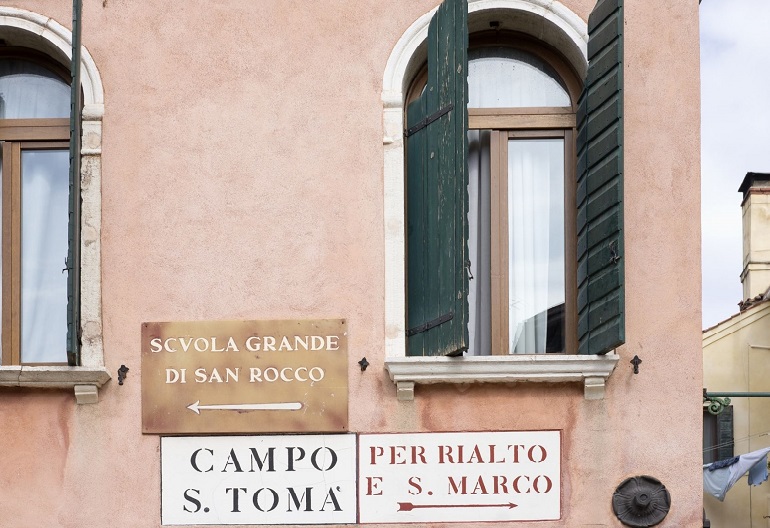 The term nizioleto derives from the Venetian 'nisioeto' which means 'sheet'. The nizioleti, in fact, resemble small sheets attached to the wall on which routes and the names of Venice's calli are indicated. They are real frescoes, painted white with a frame painted in black freehand, these unique street signs are part of the city's urban landscape. It is easy for tourists to get disorientated among the streets of Venice, the city has completely new toponymy that can be hellish for unaccustomed visitors, especially if they are foreigners. The nizioleti can be very useful if you get lost or lose your bearings. Some nizioleti indicate the direction to follow to reach destinations of particular town importance or public interest. The name of the main destination is flanked or superimposed by an arrow indicating the direction to follow on the pedestrian route. This type of nizioleto is distinguished by the fact that the lettering and the border are dark red.

The plaque bears the name of the street, bridge, or stream in Italianised Venetian. In some cases, the name of the neighborhood or parish to which it belongs is also written. The use of nizioleti dates back to the time of Austrian domination. Before, in the Republican era, there were no street names, and the streets and "campi" were named after the presence of a prominent family or business. Even the numbering of buildings is done in the style of the nizioleti, the numbers being painted red on a white background. No longer counted street by street, the numbering, therefore, develops in eight great progressions: six for each Sestiere, plus the island of Giudecca and the island of Sant'Elena. This means that in the smaller "sestieri" (neighborhood) the two thousand number is exceeded and in the larger ones the six thousand number is exceeded (2344 for Santa Croce, 3140 for San Polo, 3960 for Dorsoduro, 5554 for San Marco, 6294 for Cannaregio, 6827 for Castello).

"In Venice, the ideal thing would be to have the courage to get lost, with your head held high and not with your head bowed in some sterile tourist guide".
Lorenzo Somma 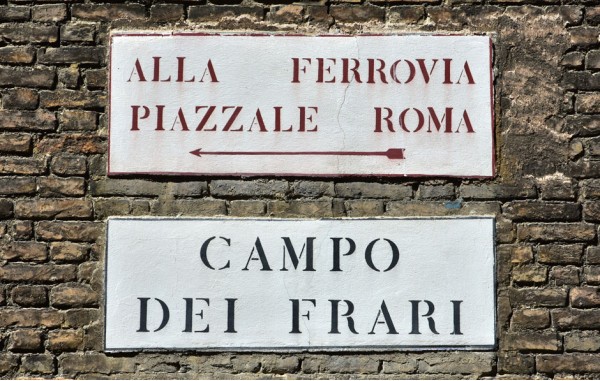 There is also a "nizioleto" in St Mark's Square, written between the portico and the first floor of the Procuratie Vecchia, near the Clock Tower.