The secrets of Ponte dei sospiri in Venice 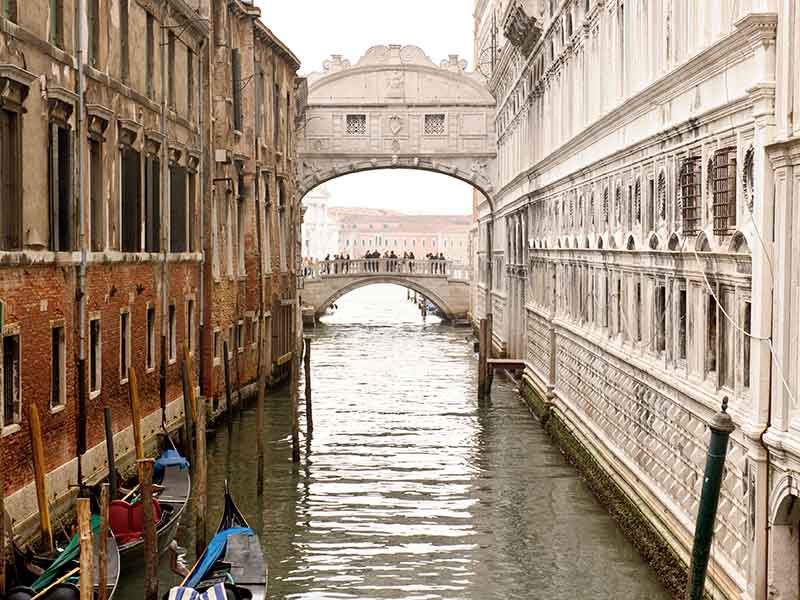 Between legends and beliefs, the Ponte dei Sospiri (bridge of Sighs) is one of the first places to visit in Venice, one of those must see that at least once in a lifetime should be visited especially if with loved ones. Perhaps the most famous bridge in Venice, and for many reasons the one that is honoured all over the world, is built in Istrian stone.
The  Ponte dei Sospir is visible on both sides but can only be seen from two other bridges, the Ponte della Paglia and the Ponte della Canonica, since it is hanging on a canal, navigable by Gondola, the Rio di Palazzo. From the outside you can see two small windows on each side perforated from which you can see some of the city's beauty through the texture: in what was designed as a bridge between the Doge's Palace, a palace of justice, and the new prisons of Venice is in fact clearly visible, for example, the island of San Giorgio Maggiore.
The beauty of the baroque friezes and decorations, the historical peculiarity of having been built by the famous architect Contin, as well as the imprisonment of the most famous Casanova have made this place famous: he told the romantic Italian adventurer, in the book "Storia della mia fuga dai Piombi", of how he escaped from that prison. One thing not to be missed is the visit from the inside - with due reservation of a guided tour - which shows a show totally different from what you expect!

The Bridge of Sighs was built in the early seventeenth century by a project of the architect Antonio Contin, son and grandson of art. His father, in fact, was Bernardino Contin and his grandfather was Antonio Da Ponte, builder of another famous Venetian bridge: the Rialto Bridge.
The bridge was built at the behest of Doge Marino Grimani, as a link between the new prisons in Venice and the offices of the State Inquisitors. The origin of its name is linked to this original function.

Why is it called Ponte dei Sospiri? The origin of the name

The most presumable but uncertain story is about the last view from the prisoners of the city, probably the final time they could see the lagoon city, the most beautiful one in the world, and doing so they sighed - thus giving birth to the myth: at this moment the sighs emitted on the bridge are quite different, because they are mostly exclamation of amazement from tourists and lovers.
Seguici sulla nostra
pagina Facebook