The Venetian Mariegola: the first statute for workers

The Republic of Venice has always had an extremely complex economic and trade system. The management of the territory and the dense network of merchant traffic has always been very advanced for the time, and consequently the work was also very protected. The Venetian state was very far-sighted and knew well that a protected job became a lasting job: there were many categories that had to be protected because they had arts that had to remain secret in the eyes and hands of foreigners. It was for this reason that all categories were endowed with a real modern statute with rights and duties to safeguard work and workers: thus the Mariegola was born.

The Mariegola of Venetian workers 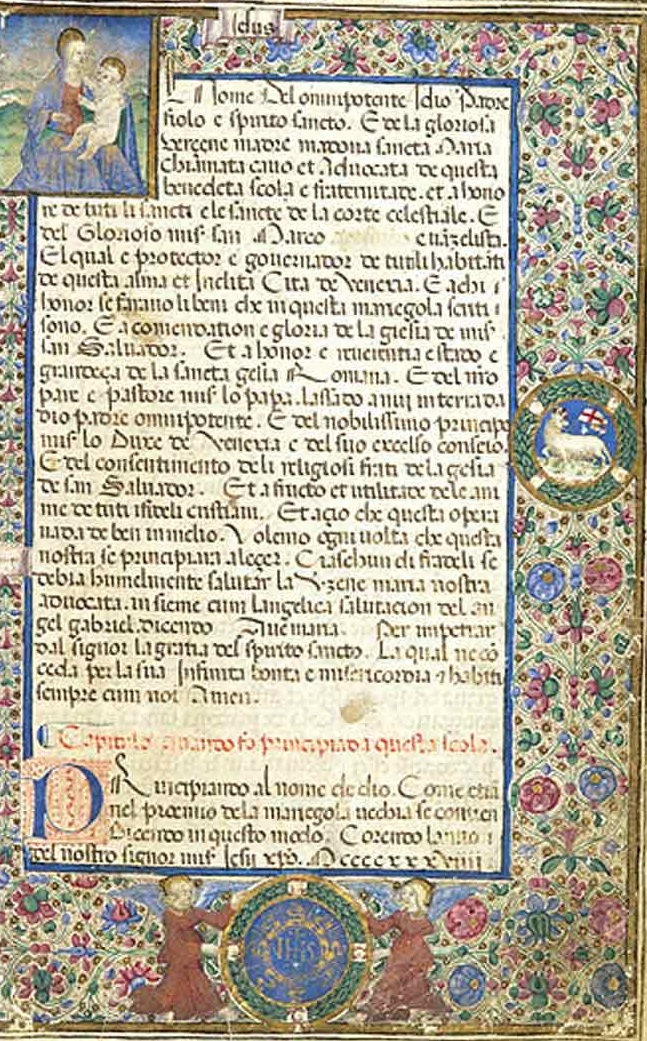 The first associations between free workers such as masters of art, artisans, tradesmen, were formed in Venice around the Eleventh Century with the aim of protecting the moral and welfare aims of workers, a bit like today's unions. The rules on the rights and duties of affiliates to free associations were reported in a statute known by the name of mariegola, from the Latin "matricula" or "Mother Rule". The statute regulated numerous aspects of the way of working of Venetian companies, among them there was the relationship between workers, in particular between owners and apprentices, but also the supervision of the loyalty of the competition, the scrutiny of the quality and also a system of mutual assistance. It also established formal rules on religious, moral, behavioral, political, economic and administrative aspects. Over the years, a large number of changes and additions have been made due to resolutions, decrees or proclamations. In republican times, the state had control over all private businesses in Venice: each corporation was required to pay taxes, the amount to be paid varied based on earnings, and moreover, members of a corporation were required to guarantee free benefits in favor of the state. The Serenissima carried out a check to ensure that all the regulations imposed by the mariegola were respected.

A state-of-the-art organizational system that also allowed control of the quality of products and exported goods, in order to maintain Venice's reputation as a reliable commercial reality on international markets. Some categories of workers received special marigole, called "golden mariegole", in particular the Murano glassmakers, considered a great resource for the prosperity of the Republic, and that needed to be protected. The arsenalotti, on the other hand, were repaid for their imprisonment inside the public shipyard of the Arsenale, and for the protection of the construction secrets of the priceless strategic value ships.

The Mariegola and the Venetian Schools

The mariegola was kept in the archives of the Schools. The schools were lay brotherhoods that chose a patron saint. Were established as associations of foreign workers in Venice and provided economic, labor and spiritual assistance. Many schools brought together groups of craftsmen based on their professions and each school had its own mariegola which served as a professional register. Middle-class citizens joined the school while patricians met in the Scuole Grandi which gained greater importance in society. Among the most important are the Scuola Grande di San Rocco and la Scuola Grande di San Marco. The Big Schools were established in the second half of the 1400s and their work was aimed at charity and assistance works and public expiation. Thanks to the self-taxation systems, the Scuole Grandi had large sums of liquid money which was reinvested in religious objects or properties in order to increase the prestige of the school in the eyes of Venetian society. They had a fundamental role in raising funds in times of crisis or for sustaining the war effort of Venice.

During the Second World War, documents dating back to 1300 were stolen, in particular it was the "Mariegola of the Scuola Grande di Santa Maria di Valverde della Misericordia" and the "Mariegola of the Scuola Grande di San Giovanni Evangelista". Invaluable material of historical value whose traces had been lost until a few years ago. In 2018, in fact, the documents were found in Boston, in the United States among the collections of the Boston Public Library. The "mariegole" were recovered and brought back to the State Archives of Venice.