Venice on April 25th with San Marco and the Bocolo Feast

San Marco in Venice: just one Saint, but three Feasts

For most people in Venice, not only April 25th is a synonym for San Marco (Saint Mark), but also San Marco and Venice are two sides of the same coin.

Saint Mark, however, has not always been a fundamental part of the history of Venice, and there was a time in which the Patron Saint of Venice was not the saint of the winged lion, but Saint Theodore. A palatine chapel has been dedicated to him in Piazza dei Leoncini, next to San Marco' Basilica.

Saint Mark gained his popularity after 838, when his relics miraculously arrived in Venice: and that was the beginning of the first feast dedicated to the Saint: the traslatio, celebrated on January 31st.

Many years and many legends later, after being lost for years, the relics were found again on June 25th, 1094: that was the origin of the second feast, the inventio.

Finally, the last one, the dies natalis, the only feast being triumphantly celebrated nowadays. On April 25th, Venice is even more lively, if possible, and remembers the Saint who has been protecting the city for more that 1000 years.

As in the past, however, the feasts dedicated to him were more than one, so today April 25 is the privileged moment for more than one tradition. Stories of thwarted love affairs and light rosebuds will accompany our journey through the joyful Venetian calli (Venetian for streets).

Before we share the legend, this is San Marco's Feast nowadays 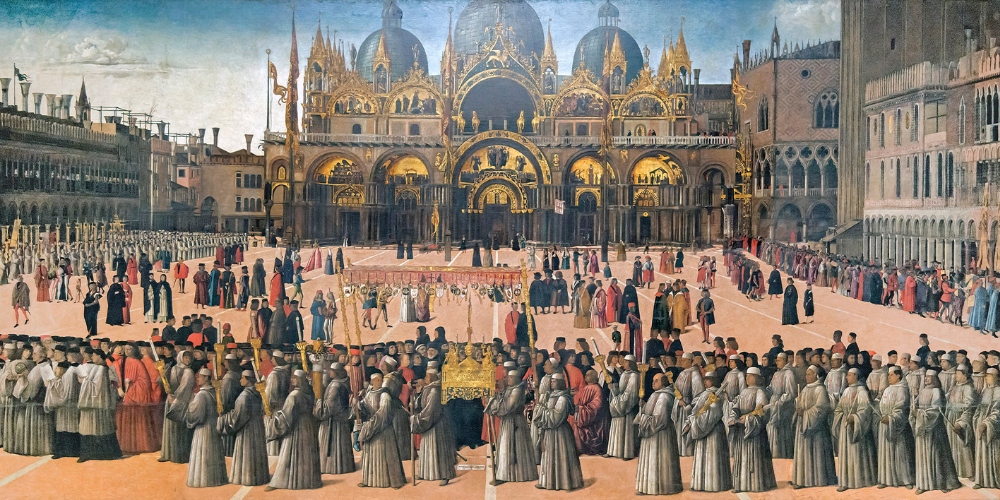 The custom of celebrating San Marco with great fanfare every 25 April dates back to the times of the Serenissima.

Inside the Gallerie dell'Accademia, memory is jealousy preserved through one of the best known paintings by Gentile Bellini, completed in the last years of the fifteenth century.

In the canvas, you can see a long procession with the Doge at the head. He is preceded only by the bearers of the banners, the trumpeters and the symbols of the Serenissima. Then follow characters dressed in white, who carry candles and a canopy, and are the Brothers of the Scuola Grande di San Giovanni Evangelista, to whom the canvas was originally intended. At the center of the scene, in a slightly lowered position, you can see the chest containing the relics of the Saint.

Art is giving us back the most popular tradition perpetrated during the centuries of the Serenissima. What remains today?

Certainly the Feast of San Marco is less spectacular than in the past and, stripped of its link with the doge's power, it has a mainly religious nature.

Chaired by the Patriarch, there are two celebrations in particular:

Furthermore, on April 25th, the San Marco Award ceremony is held, the aim of which is to enhance the excellence of Venice. Whether the winners are people distinguished in the arts, in sport or in school, or in particular social initiatives, they are awarded on the afternoon of April 25th, inside Palazzo Ducale, in the presence of the Mayor.

However, enticed by the promise of love stories and rosebuds, the time has come to tell you more about another 25 April in Venice...

According to a romantic venetian tradition, on April 25th every woman is given by her partner a red rosebud (in Venetian "the bócoło"), as a sign of love.

The romanticism of this gesture refers to an event that took place at the beginning of the ninth century. The daughter of Doge Angelo Pancrazio, Maria, known as Vulcania, was madly in love with Tancredi, a poor troubadour. The father of the young woman, however, due to the differences in the lineage of the two, would never have allowed them to join in marriage.

So Maria got an idea: her Tancredi would leave with Charlemagne's Franks towards Spain, to fight against the Arabs. Once he returned victorious, his father would no longer be able to oppose their love.

Tancredi therefore left confidently for Spain, covering himself with glory in numerous battles. It seemed that nothing could prevent the two from fulfilling their dream.

It happened, however, that one day the knights of the noble hero Roland (the same sung in the poem Chanson de Roland) arrived in Venice, bringing ominous news. Tancredi had fallen in battle, near a rose garden. In the last moments of his life, he had plucked one of the white buds and begged his friend Orlando to take it to Venice to his beloved. In the gesture, the white bud soaked in blood, and so it came into the hands of a desperate Maria, who fell silent for her pain.

The next day, April 25, Maria was found lifeless, with the bloody bud stealth through her heart.

Since then, tradition has it that a man offers her beloved a red rosebud, a symbol of a love destined to never falter.

To celebrate the Venetian legend and tradition, in 2014 the artist Elena Tagliapietra created a very special art installation in Piazza San Marco: "A Rose for Venice". A collective of hundreds of people arranged themselves in the square, creating from above the vision of an immense red rosebud. Over time, the photo has become the symbol of the Bócoło Festival in Venice.

And at the end, let's dig into the culinary Venetian tradition on April 25th

Speaking of Venice and its traditions, it's impossible not to mention something regarding its wonderful cuisine.

In fact, tradition has it that on April 25th, in Venice, not only a man has to give a rosebud to her beloved, but also everyone has to eat a typical Venetian dish: risi e bisi, in other words, rice with peas.

More similar to a soup  than a risotto, this dish is said to be introduced by Byzantine, who taught the Venetians to mix rice with other ingredients. In a while, risi e bisi became a delicacy, and it has been served to the Doges on April 25th for centuries.

And now, even if we probably are not Doges, it will be wonderful to taste an incredible Venetian dish, accompanied by the memory of traditions.