In the rich and vibrant Venice of the 16th century, an unexpected woman managed to make her way through a society dominated by men, standing out with her subtlety wit and great knowledge. She was Veronica Franco, whose name remains immortal and whose persona became a symbol of equal opportunities. During her life, indeed, she challenged the traditional patriarchal culture and defended, through both her bold actions and her sharp words, women’s position and advancement.

Veronica Franco was a sophisticated courtesan, a brilliant poetess and an elite’s acquaintance. She was all of this and much more. She demonstrated to be a rebel spirit, an independent and proud woman, the personification of what today we could call one of the first “feminist activists” in the Italian Renaissance.

An exquisite and independent courtesan 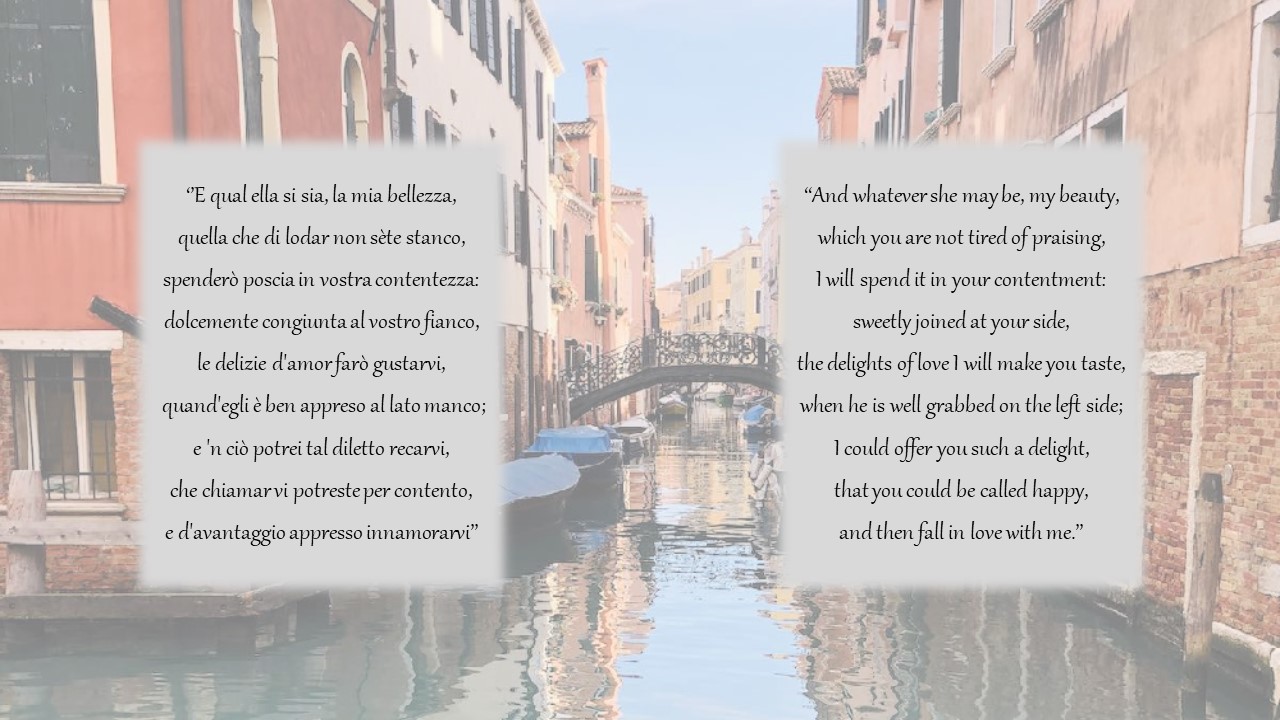 Veronica was born in 1546, in the Republic of Venice. Her parents were Paola Fracassa and Francesco Franco and they belonged to the social class of “original citizens”, the social group lying in between the aristocracy and the working class, having, thus, at their disposal enough wealth and decent living condition. She had three brothers, Jeronimo, Horation and Serafino, who studied at home, therefore, she managed to join the “study group” and obtained a good education. This was a very uncommon and lucky possibility for a young lady of the 16th century. Their mother used to work as honest courtesan and she abandoned the profession after starting her family. Yet, when Franco died prematurely, she had to return to her old job, initiating little later also a very young Veronica.
It can sound odd, but being a courtesan concealed some benefits, if you were the right one! Venice, indeed, recognised two, very different, types of courtesans. The “cortigiana di lume” looked like a general prostitute. They used to work on the shades of Rialto Bridge, had a low social status and were selected purely for carnal pleasure, regardless of any intellectual and social skills. Whereas, the “cortigiana onesta” (honest courtesan), was a higher rank courtesan, whose duty was to act as a partner for company, entertainment and intellectual discussions. Therefore, these women were elegant and educated. They showed a great deal of cultural knowledge and talents, such as music, literature and arts. In conclusion, as the poet Pietro Aretino perfectly described “Venus became a woman of letters”. The peaks of this profession lied in the freedom, independence and, as mentioned above, in the constant access to culture, often precluded to women. Veronica Franco was destined to become the most famous high - ranked courtesan of her times.
Around the age of 16, she got married with a doctor, Paolo Panizza. The union was financially beneficial for her, but soon, the man turned out to be an alcoholic gambler, pretty violent towards his wife. So, after a while, Veronica Franco left his partner behind and moved back to her mother’s house, exactly when she gave birth to Achilletto, first of her six children, who all probably died prematurely. The two women started to both live and work together. A proof of this can be found in the “Catalogo de tutte le principal et più honorate cortigiane di Venetia”, published in 1565, the catalogue listing all the honest courtesans of the city, with their addresses and prices. Veronica’s name was written together with Paola, and their price was the same, 2 ecus per night. Nevertheless, after some time, she became so desirable that just a kiss cost 5 ecus and her company was worth 50.
She wished to live surrounded by luxury and power, therefore, in order to earn enough money to make the dream come true, she employed all the necessary tools she had available. She bewitched men with her stunning beauty and intrigued them showing a great deal of cultural education. She was beloved for her ability of playing music, singing, dancing and especially writing. Moreover, in order to weave a social network and create connections with the most influential men of the city, she strategically chose her clients, possibility allowed only to the honest courtesans, picking strategically only artists, aristocrats, poets, intellectuals and politicians.

A life of pleasures and poetry in Venice 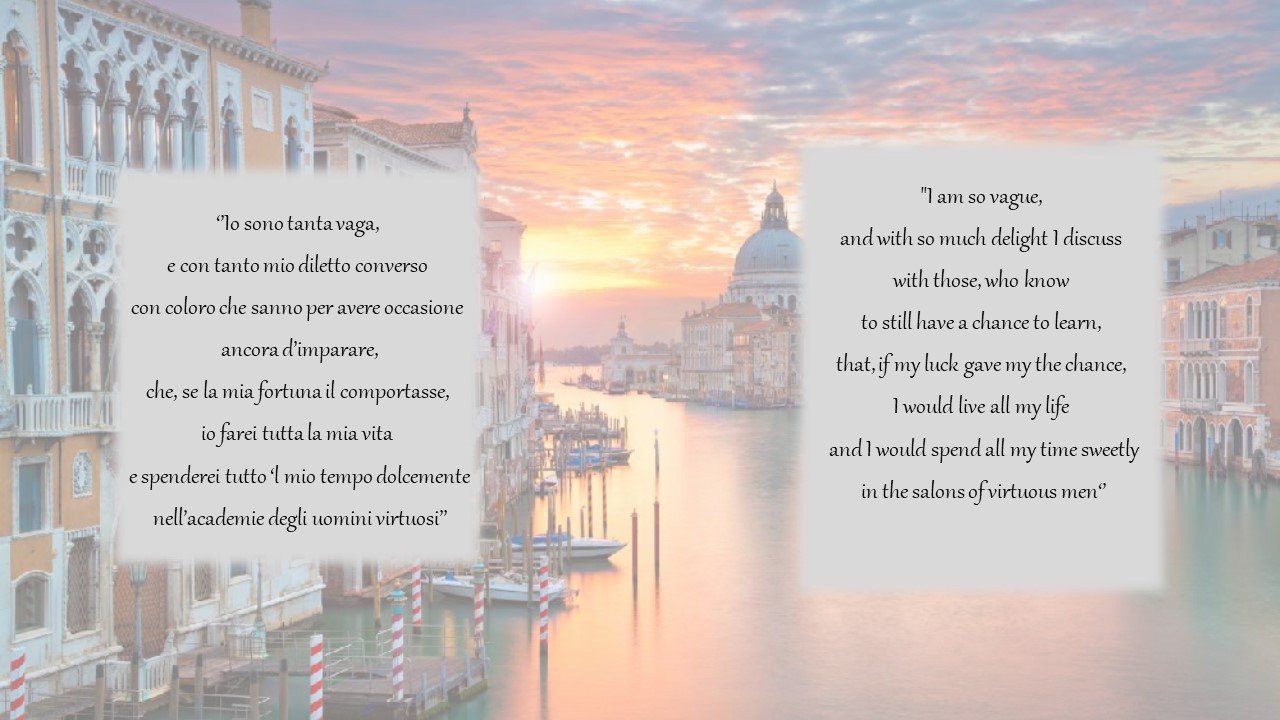 Thanks to her profession and to her compelling charm, Veronica managed to join the most prominent cultural salons of Venice. There, she delighted the Venetian aristocracy, not only with her beauty and body, yet, also with the wit and intellect, participating actively in academic discussions, literary seminars and editing poetry anthologies. She was admired particularly for her writing skills and her fascinating poems. Therefore, she shortly befriended several influential figures of the city, one example, Tintoretto, who painted her most renowned portrait.
Joining the literary salon “Ca’ Venier” was a fundamental step for her career as a poetess. This esteemed cultural gathering was run by the poet Domenico Venier, who became Veronica’s patron, playing an important role in the publication of her first collection of poetry, Terze Rime, in 1575. In a time when the Petrarch verse dominated the literary scene, Franco decided to compose in tercet, to enhance the narrative rhythm of her poetry. Her work shows a personal meditation about herself and her life, highlighting topics dear to her, such as the women position in society and gender equality. From her verses, it is possible to understand that she believed in the predominance of the vigor of the soul over the strength of the body, claiming that women and men could achieve the same results. Indeed, what was fundamental was the efforts one makes in order to reach a result and not biological characteristics. Therefore, men and women were not so different, and the latter could be as good as the former in writing about passion, love and even pleasure and sex. In her verses, she strived to defend female advancement and status, challenging the patriarchal system and becoming one of the first examples of women voice, upstream and revolutionary of the Italian Renaissance.
At Ca’ Venier, Veronica was particularly close to Domenico’s nephews, Marco and Maffeo Venier. The first became soon the love of her life, whereas the second turned into an antagonist. Perhaps driven by the jealousy of not being Veronica’s favourite, he got angry and dedicated to her offensive verses, touching peaks of great rudeness and calling her even “whore”. Here, Veronica showed a strong personality and a brave spirit, standing immediately up for herself and her honour: she challenged him to a poetic duel. He refused to participate, she emerged as the winner and her literary skills were finally legitimized.
While obtaining this success, Franco was also appointed the most desirable courtesan in town, due to a night spent with Henry of Valois, the future Henry III, king of France. He was heading to France from Poland and decided to have a stopover in Venice. The Republic caught the occasion to appear unforgettable at his eyes, aiming to establish a beneficial alliance. Therefore, Venice organized 11 days of parties, rich feasts and luxuries, offering, as icing on the cake, Veronica’s company, which, according to some sources, left him particularly satisfied. This event gave her notoriety and fame among the Venetians, her wealthy increased even more and her luxurious life kept flourishing.

The pursuit for woman rights 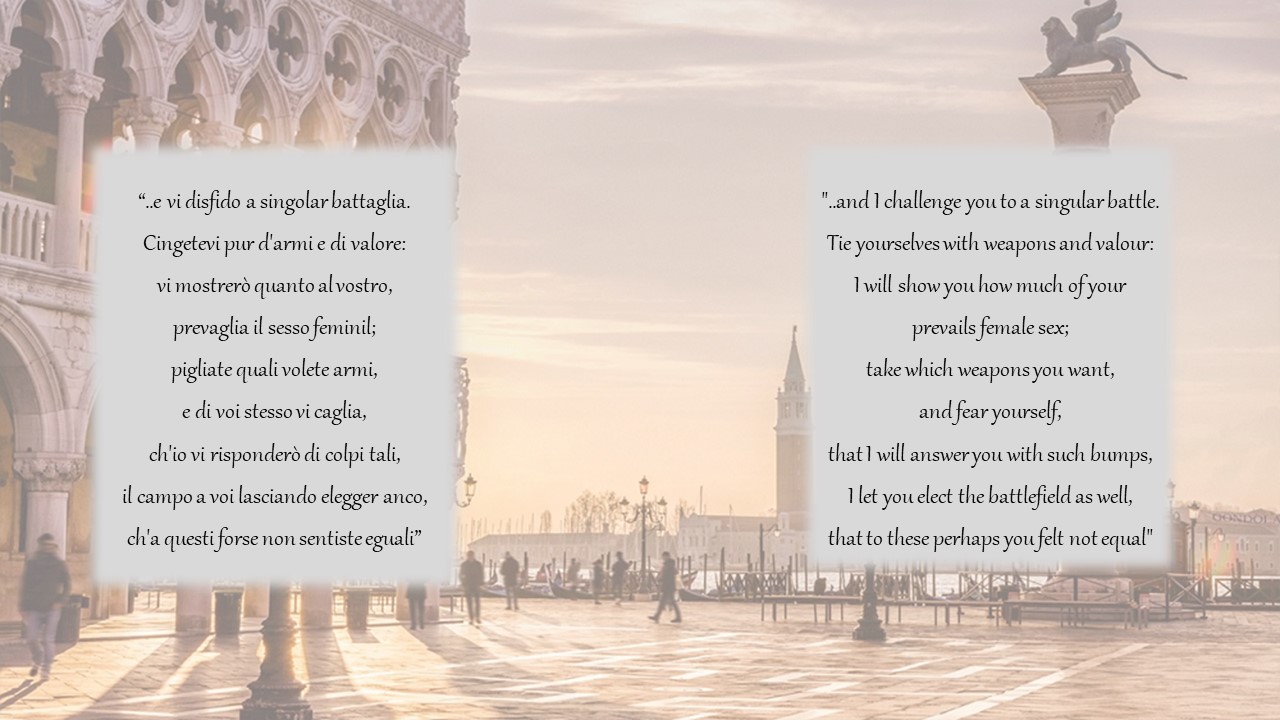 During this thriving period of her life, Veronicae moved from her mother’s house to an elegant palace in Santa Maria Formosa, where she arranged a sort of salon, hosting poetry workshops, philosophical debates, cultural activities, alongside more lascivious entertainments. She never left Venice, besides for two years, from 1575, when the plague broke out in the city and forced her to flee. Once back, she had to face the loss of her assets, robbed in her absence and a trial in front of the Court of Inquisition. The charge: immorality and sorcery. The initiator of this conspiracy is thought to be Ridolfo Vannitelli, to take revenge against the woman, who had probably rejected him. Veronica, once again, showed great courage, defending herself from the accusations, sharping her wit and her tongue and counting on her influential connections. Ultimately she got absolved and, in the same year, 1580, she published a second literary work, the Lettere Familiari a Diversi, an epistolary collection of 50 letters she wrote to figures of her times and 2 sonnets she composed for Henry III, back six years before. This work denotes impressive writing skills and an engaging pre - baroque style. The correspondence reflects an elegant world of aristocrats and intellectuals, where she addressed men of her time to discourse over literature, arts, fame, the legacy of her name and private affairs. The work holds a valuable importance both for literature and social science.
After this publication, all the information about Veronica’s life is blurry and scattered. For her last ten years, she had a more modest standard of living. Nevertheless, she never stopped fighting for the cause of women, especially the most vulnerable ones. Indeed, she worked for the creation of an institution to host old and sick courtesans and support young prostitutes willing to change their life. Eventually, she died of fever at the age of 45, in 1591, and, until the end she continued to offer unselfishly. Her last charitable deed was the donation of her inheritance to some women in need.

The legacy of the poetess 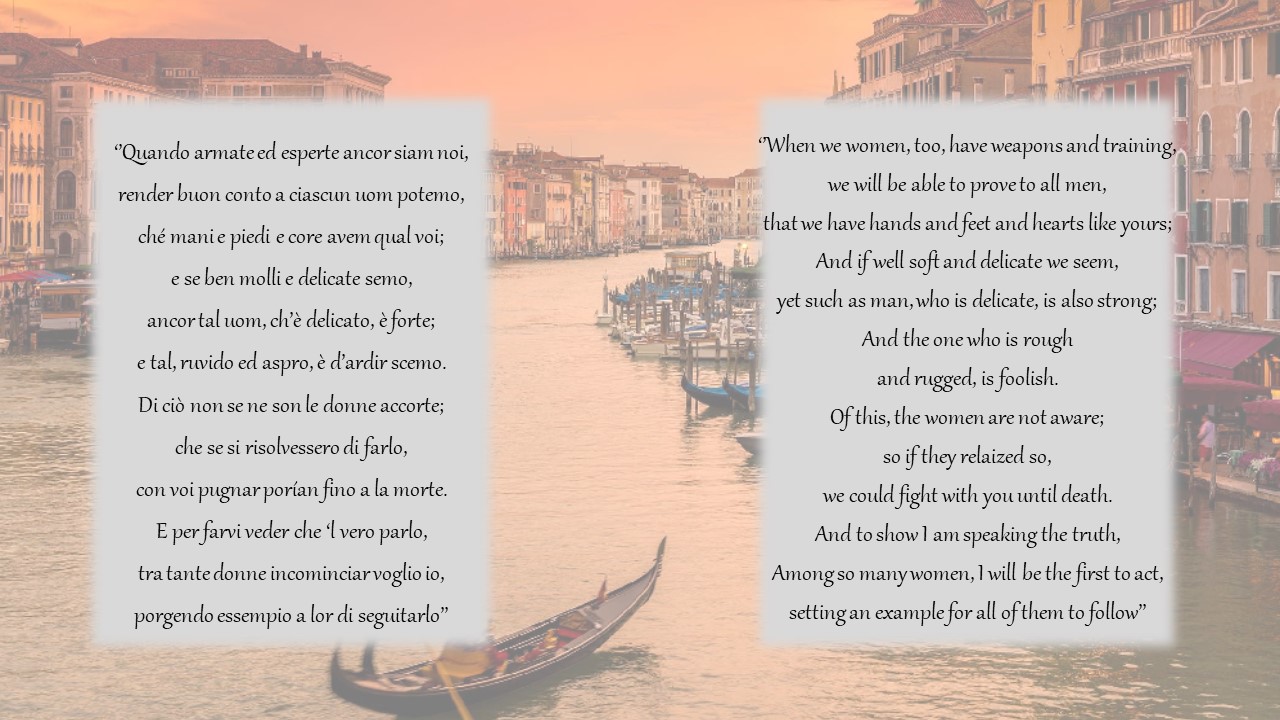 During a time were the ruling class was man and was in charge of the destinies of women, Veronica Franco represented an early vibrant voice of feminine empowerment.
Her candid support for this cause, her strong believes against inequality, her political and social verses, her battles for recognition and her rejection of the status quo engraved Veronica’s image in history.
She was praised, during her life, because she would speak up for womanhood and demand more consideration and equality. She is beloved also now, because her reflection over genders conflicts is still perceived as a pretty current topic; while her endeavour to change aspects of the society she considered wrong, thus, she firmly refused, can be sensed as an example of the social battles of today.
Seguici sulla nostra
pagina Facebook