The Baroque in Venice: Ca' Rezzonico, the palace of a Pope

The 600 was a singular era, because while many Italian states declined under Spanish rule, the Republic of Venice maintained its power and prestige. But the city evolved adapting itself to changing times, and this evolution found its best expression in architecture.

Thus, the Venetian Baroque was a translation and an exasperation of the classical Renaissance languages, of which it preserved and perpetuated the innovations that this had brought to the Lagoon, but enriched with new elements and ornaments that amplified the expression of the new stylistic code.

A new artistic language: the magnificence of Cà Rezzonico 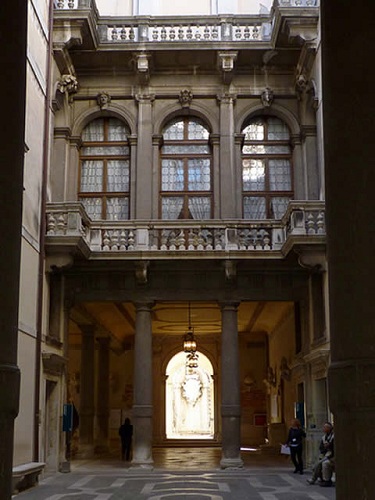 Cà Rezzonico is the true emblem of the passage from the sixteenth to the seventeenth century, the work of the greatest exponent of this new current, that Baldassarre Longhena, Venetian architect, who considered the classical and geometric structures not suited to the luxurious atmospheres of the city where the Carnival occupied most of the year: to the strict rules of classicism he preferred a much more scenographic and exasperated research.

It is the mid-seventeenth century when the Bon family commissioned the architect to build their home. The Longhena realized a project in which a skilful play of light and shadow manages to expand the space and give a wide breath and give a magnificent perspective that from the old portego passes through the hallway up to the small external entrance portico and ends up with a view of the waters of the Grand Canal.

The entire building is divided from the ground floor to the third, with an internal courtyard and a large garden, located on the opposite side of the water door.

A scenographic architecture: the facade on the Grand Canal

But it is in the main façade that the Longhena lets itself be inspired by the facades of Renaissance palaces, bringing them, however, to the typical exasperation of the Gothic style. However, that of Cà Rezzonico is not a simple facade, a scenic backdrop: here a game of voids and fullness, with the prevalence of the former, gives a free and skilful interpenetration between inside and outside. Cà Rezzonico is an outside living immersed in the Venetian reality, where the reflections of the waters of the Grand Canal certainly determine an added value: it is a baroque building, and therefore modern in new forms, but it is Venetian and therefore coherent with the surrounding environment.

The façade is geometric and ordered, but here the decorative elements multiply, especially for the wide openings: the arches are supported by double columns, which together with the columns that rise from the balustrade give a sense of depth and three-dimensionality that does not find earlier in the lagoon, exasperated by the presence of puttini comfortably laid on the curvature of the arches themselves, placed there to admire the wonders of the Grand Canal that opens before their marble eyes. This verticality of these elements is abruptly and wisely interrupted by the horizontality of the richest elements, such as the balustrades and the stringcourses, up to the attic fascia that overflows with flowers and scrolls, acanthus leaves and corbels to adorn the oval openings.

Once inside you are captivated by the magnificence of the interiors and the richness of the decorations: the gold of the stuccos, the bright colors of the paintings and the polychrome of the marble will leave you breathless.

From Bon to Rezzonico, to Pope Clement XIII: the story of Cà Rezzonico 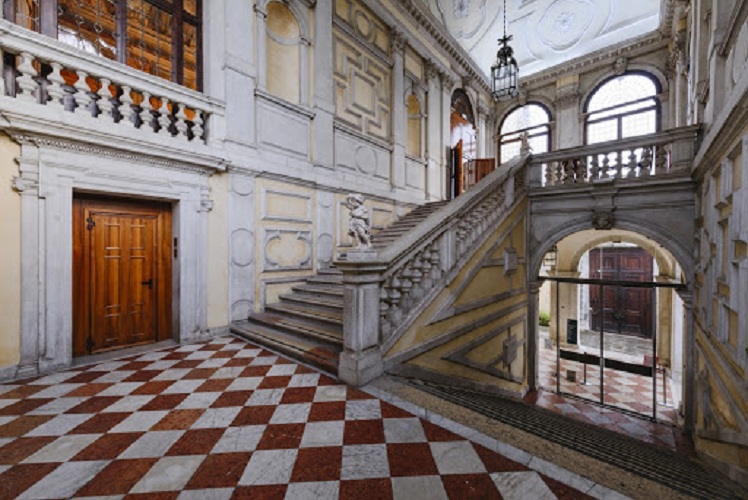 So much magnificence, however, was not brought to fruition by Longhena: the Bon family, in fact, for the best intentions and good ends, soon realized that the work was turning out to be too big for its financial and therefore he had to interrupt the construction. Unfortunately, not only did they not have enough money, but they soon lost the architect too: it was 1682 when poor Longhena died without ever seeing his completed work.

The Bon never succeeded in completing what they had started and in the second half of the 700 they were forced to sell the incomplete building to Giambattista Rezzonico, a nobleman not of blue blood, but for the payment of money. Oh yes, at the time it was possible to "buy" even a noble title: for the Republic was not a problem, indeed they considered it a positive event to replenish the government coffers. The new nobleman Giambattista had to complete the work and entrusted the work to the architect Giorgio Massari, who nevertheless remained faithful to the project of his late predecessor, perhaps also for honor and respect for the fame and genius of a great artist: a behavior without admirable doubt, which manifested all the humility of a young artist in the presence of a great teacher. The palace was completed in 1758, when the son of Giambattista Rezzonico, Carlo, went to the papal throne with the name of Clement XIII.

However, even Giorgio Massari left an important mark: to him we owe, among others, the magnificent and monumental staircase that, on the opposite side of the Grand Canal, leads to the first floor: two marble ramps of imposing beauty, surrounded by walls decorated with frames and golden boiserie that reach the vaulted ceiling, and on the balustrade the statues "Winter and Autumn" rise by Giusto Le Court.

From a patrician residence to a museum: Cà Rezzonico today

The Rezzonico did not enjoy their palace for a long time, because at the beginning of the nineteenth century the family, due to the absence of male offspring to ensure the perpetration of the family, became extinct. Guilt of Charles who had chosen ecclesiastical life? Yes, but we can forgive him, he became Pope!

Many owners succeeded each other in the coming epochs, and each of them, when leaving the building, brought with them furniture, objects and works of art, ending up completely stripping the building.

In 1935 the City only had to buy an empty container: a magnificent container but still empty.

Today the building houses the Museo del 700 Veneziano, in which furnishings and objects typical of the eighteenth-century era have been enclosed.

From Tiepolo to Canaletto: the Museum

A museum itinerary, which starts right from the grand staircase of the Massari, unique in its kind and full of extremely interesting elements and works.

We can not list all the reasons why it is worth visiting the palace and the museum, but leaving you to discover these wonders, we give you some ideas:

On the first floor the old portego becomes a connecting element of the various rooms. Among these there is the Ballroom, which has the distinction of being the largest hall among all the Venetian palaces and certainly the richest in terms of pictorial decorations and stuccos, such as the works of Giambattista Crosato and the two huge glass chandeliers Murano that descend from the ceiling and contribute to create a magical dimension, almost fairytale that immediately brings the imagination to the lavish dances that animated the salon, where the wide skirts of the noble ladies created a sinuous and cheerful movement, mysterious and luxurious. In the apartment of the spouses, however, is the Alcove and the Sala del Trono, where the ceiling was frescoed by Giambattista Tiepolo.

In the Sala del Tiepolo you can admire the decorated ceiling depicting "The Nobility and the Virtue that bring down the Ignorance". On the second floor opens the portego with two paintings by the young Canaletto "The Grand Canal from Palazzo Balbi to Rialto" and "Rio dei Mendicanti", two young masterpieces of two splendid Venetian views, in which the artist enlarges the dimensions of the Grand Canal wants to enhance the characteristic of Venice as a city of water.

The Pharmacy ai Do San Marchi

On the third floor it is worth visiting the Pharmacy at Do San Marchi, which in the 18th century was located in Campo San Stin: perfectly preserved the magnificent dark walnut furniture of the time and all 183 vases of majolica decorated that contained spices and ingredients for the medicines. The pharmacy is composed of 3 environments: the first that constitutes the workshop itself, the second is the laboratory in which there are still very thin glass stills, the third is the backroom completely covered with wood boiserie, rich in decorations and carvings: you will want to take a medicine!

Ca Rezzonico is undoubtedly the emblem of the Venetian 700 and the museum that now occupies it allows you to relive that era, when the Carnival lasted for many months of the year and allowed to shoot masked and hide identity behind the famous Venetian masks to take possession of a new identity, ephemeral, light and very luxurious. You do not have to close your eyes to dream but dream with open eyes, wear a mask and a magnificent dress and let yourself be led in this luxurious era and imagine dancing to a great ball.

Attention, do not dream too much that you could meet the great seducer of that era Giacomo Casanova ... ..