The bridges of Venice: the extraordinary nature of a city built on water

The bridges of Venice: extraordinary character of a city built on water

Venice is a city of truly extraordinary architecture, built directly on the water. Instead of roads we find the canals, the small canals and of course the many bridges that historically connect the different Sestieri of the city.

It is these particular architectural features that give it a unique charm, capable of making anyone who chooses to visit and live it fall in love.

A brief focus on the most beautiful and famous bridges can be interesting when you find yourself getting lost in Venice: imagine that there are over 430 bridges connecting the over 100 islands that make up the city. We selected 10 of them just for you.

Ready for this su e zo (up and down) for bridges? The Rialto Bridge it is probably one of the most famous bridges in the city and in the world, and is located on the banks of the Grand Canal: it was the first bridge to be built to connect the two banks of the Canal. To serve that area, where the Rialto market is located, there had already been several temporary wooden structures, at least until the end of the sixteenth century, when a competition was called for a stone bridge. The winner was Antonio da Ponte's project and the work was inaugurated in 1591. Today the majestic structure made of Istrian stone is an icon of the Venetian city: it consists of a single arch that unloads its weight on wooden foundations. Walking on this bridge is a unique experience. 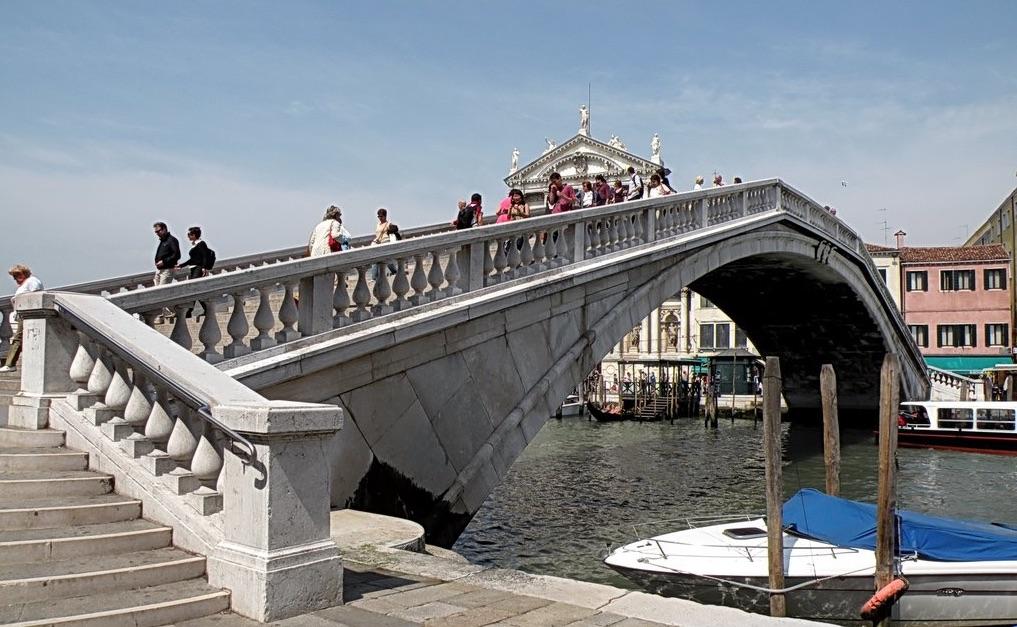 The Scalzi Bridge was the second bridge built to connect the banks of the Grand Canal after the Rialto one. It joins the Sestieri Santa Croce and Cannaregio and takes its name from its proximity to the baroque Chiesa degli Scalzi, but being near the Venice Santa Lucia station it is sometimes called the "Railway Bridge". Designed in the early 1900s in cast iron, it was replaced by the current one in 1934: built entirely of Istrian stone and characterized by a slender and elegant shape. Equipped with a single large arch that allows the passage of steamers and medium-sized boats. 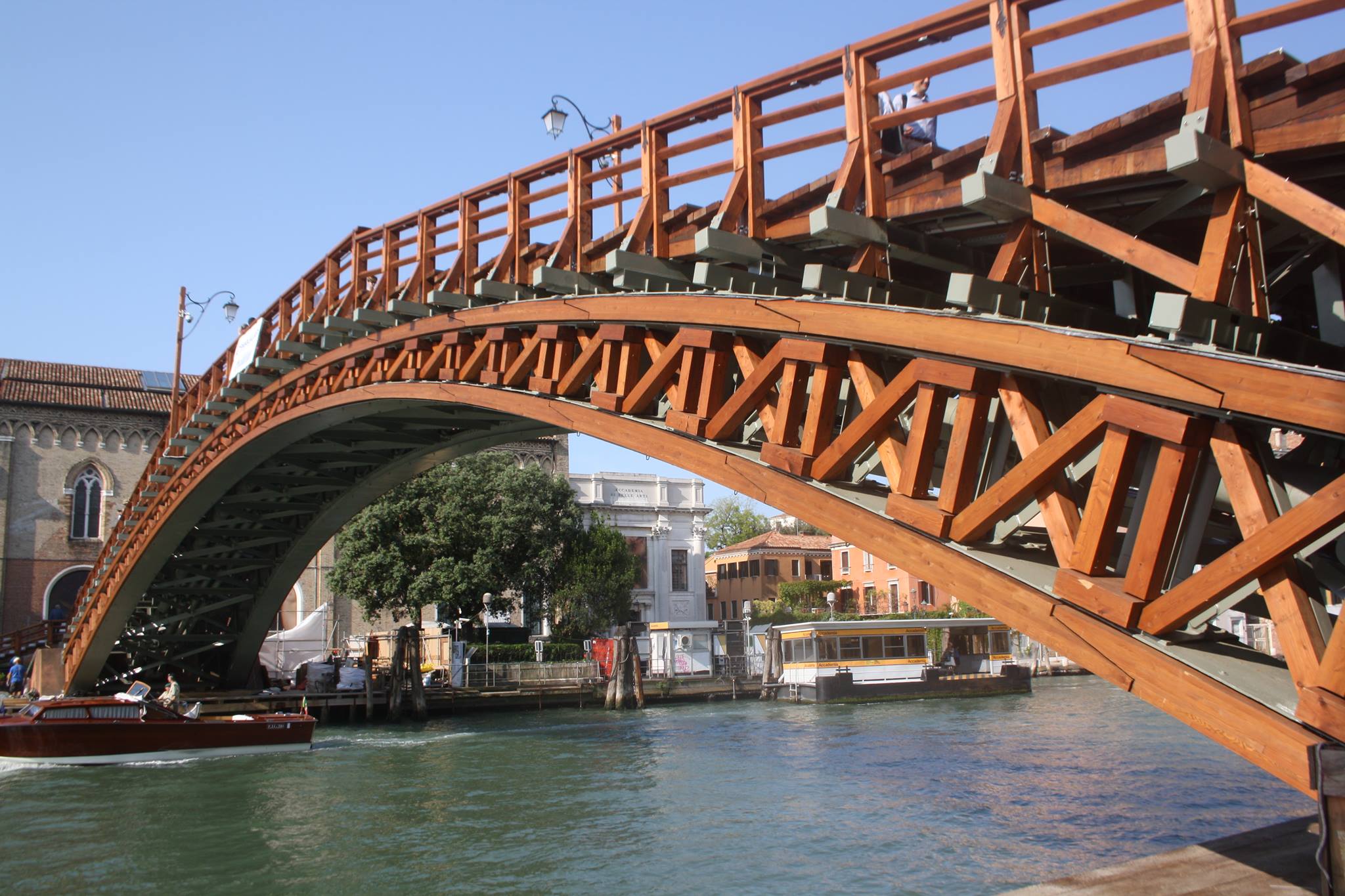 The Academy Bridge is the one located further south among the four crossings that are on the Grand Canal. It is located between the Church of San Vidal and Campo della Carità, very close to the Gallere of the Academy, a historic museum institution famous for the paintings of Tiziano Vecellio, Giorgione and Paolo Veronese. It was built in cast iron in 1854 but the continuous failures required the design of a new bridge. The dangerousness of the structure made the authority decide to demolish it and replace it with a temporary one made of wood and steel, in the meantime the competition for the construction of the definitive bridge was banned. It was 1933 but that temporary bridge was never replaced, remaining in effect the third bridge on the Grand Canal. Only a year ago it was the subject of important restoration and maintenance work. 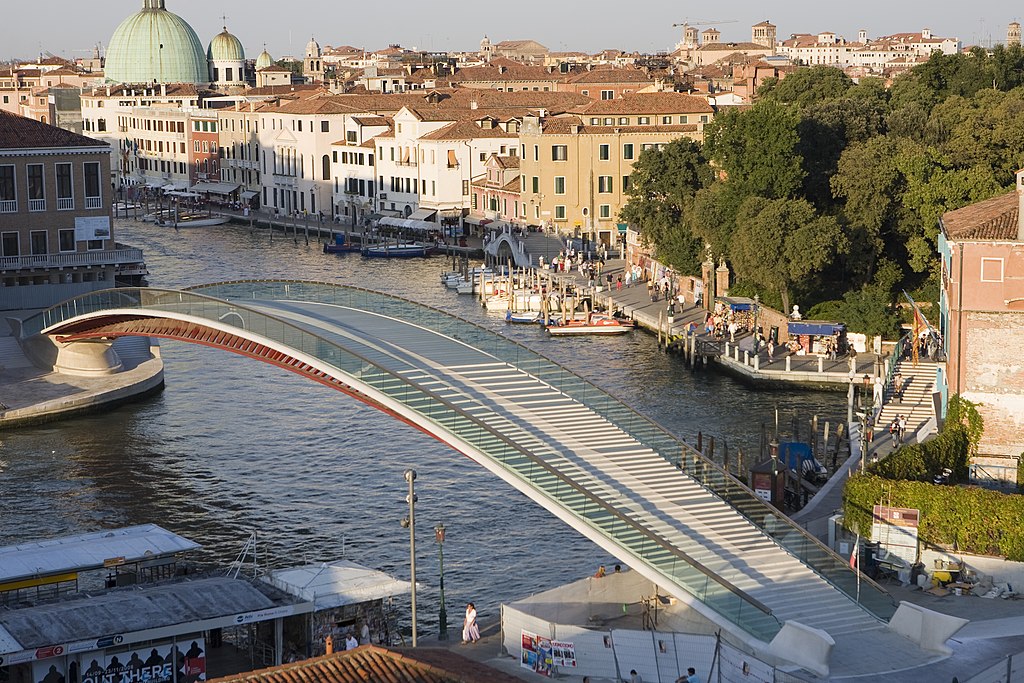 The last bridge built on the Grand Canal.

The Constitution Bridge, also known as Ponte di Calatrava in honor of its builder Santiago Calatrava, a Spanish architect among major protagonists of contemporary architecture. Connects two focal points of the city: Piazzale Roma, parking for road transport, and the Santa Lucia Station for transport by rail: a fundamental element for the daily viability of the city!  It was inaugurated with great pomp in September 2008, it has a lowered arch shape and is built in steel and glass, whose lines are simple, essential and modern, suitable to fit into the difficult and historic Venetian context, resulting quite discreet. Since then the bridge has been the subject of continuous controversy due to design flaws.

It is the bridge that tied the fish-Venice to the mainland like a line!

Today, the Liberty Bridge is a large road and rail bridge that connects the entire historic centre of Venice with the mainland. The oldest railway section was built during the nineteenth century, while the road section was the work of engineer Eugenio Miozzi (author of a profound work of urban regeneration) and was inaugurated in 1933. 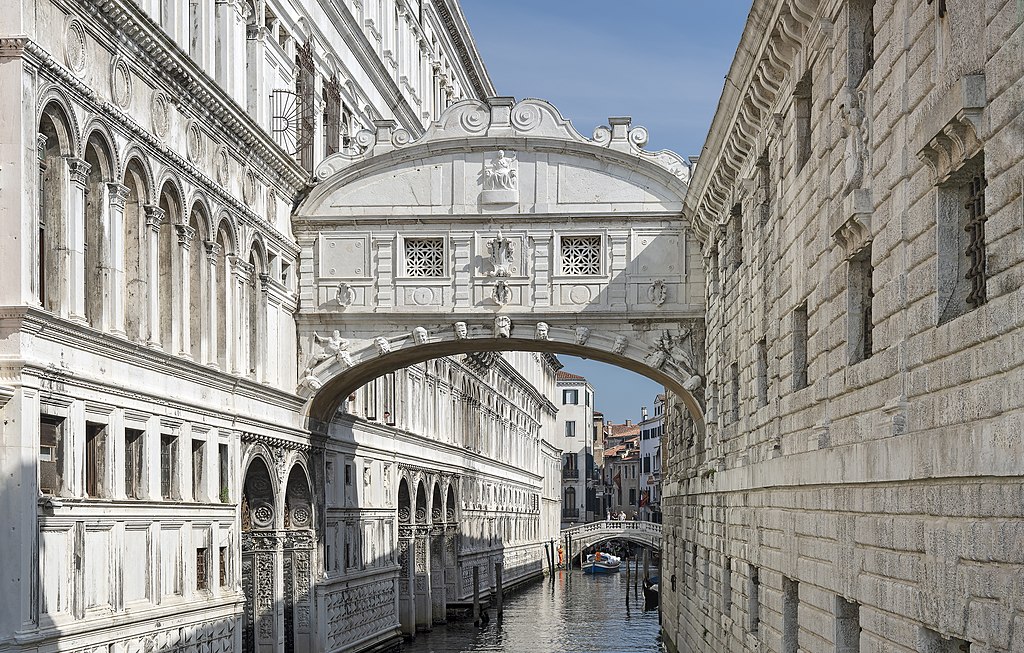 The famous Bridge of Sighs is also considered a Venetian icon, admired all over the world. It is built entirely of Istrian stone, like most Venetian bridges, adopting the sinuous forms typical of Venetian Baroque. Situated above the Rio di Palazzo, it connects the Doge's Palace to the so-called "new prisons". Legend has it that the condemned man crossed the bridge to pass from the prisons to the Ducale and then to Piazza San Marco for the execution of the capital, and there he sighed with the melancholy of one who knows he will never see the outside world again. This is why historically this bridge is known as the one of "sighs".

The Bridge of the Spiers 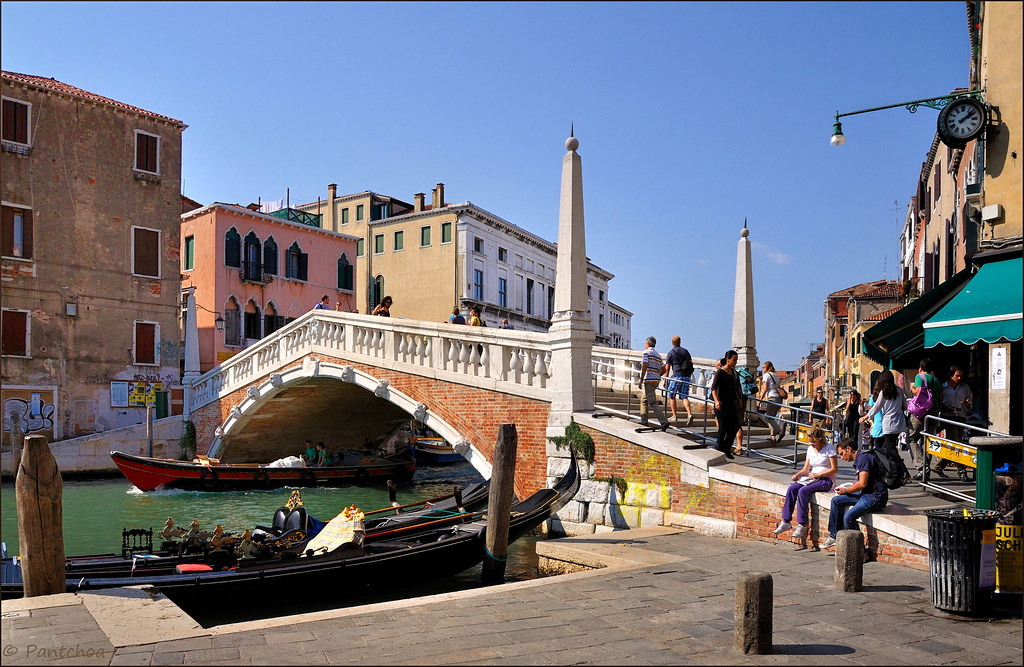 The Bridge of the Spiers is located in the Cannaregio district, on the homonymous River and is characterized by the presence of four pinnacles at its ends, from there the name "of the spires". It has a single arch decorated with shields and masks, as happens with other bridges in the city: the elegance of the white stone of the balustrades contrasts with the bricks of the structure but come together like in a strong handshake. And it is the same narrow that joins the Rio di Cannaregio with the Grand Canal.

Bridge of the Fists 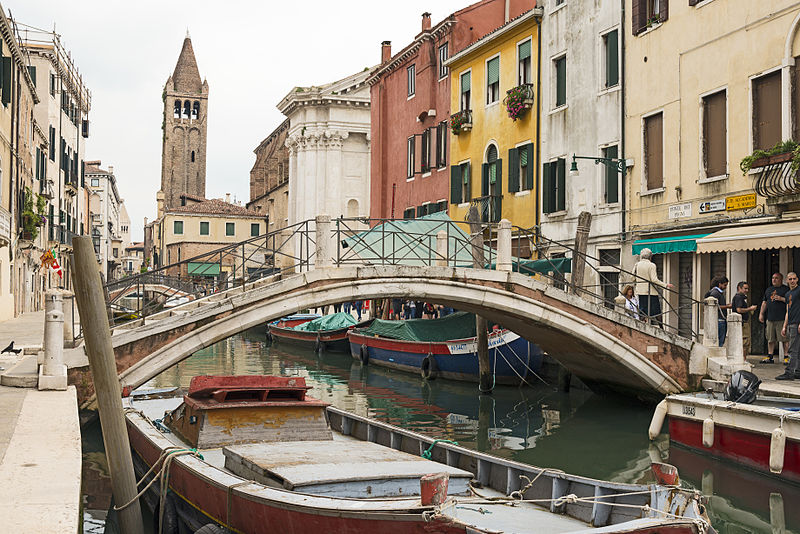 The small Bridge of Fists, located on the brook of the damage, in the Dorsoduro district has a very special past. It is so called because of the ancient tradition of "the war of fists" in which the two factions of the Castellani di San Pietro di Castello and the Nicolotti di San Nicolò dei Mendicoli challenged each other. They challenged each other en masse with blows of fists trying to drop into the water as many opponents as possible, obviously lost the faction with more men bathed by the waters of the river. The peculiarity of the bridge is that it bears the metal imprints on its top, a sign of the position that the feet of the combatants had to take to fight only with their fists. 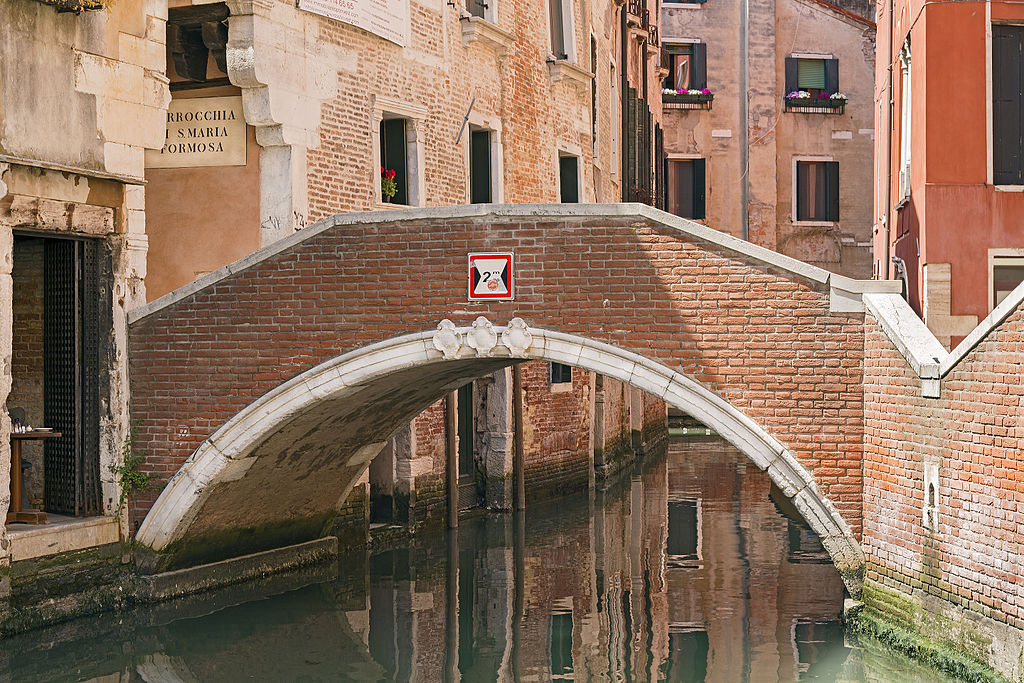 The Paradise Bridge is located in the castle area, crosses Rio del Mondo Novo and enters Calle del Paradiso, a characteristic route of the city with a medieval and Byzantine style defined by many as the most beautiful street in the whole city. The structure is composed of very simple lines, made of bricks and is surmounted by two barbican structures on both sides. The latter are practically defensive or structural elements of the Middle Ages, widespread in Europe especially on defensive walls or towers. In Venice they are used to recover living space without diminishing the pedestrian area, which was essential for the shape of the city. 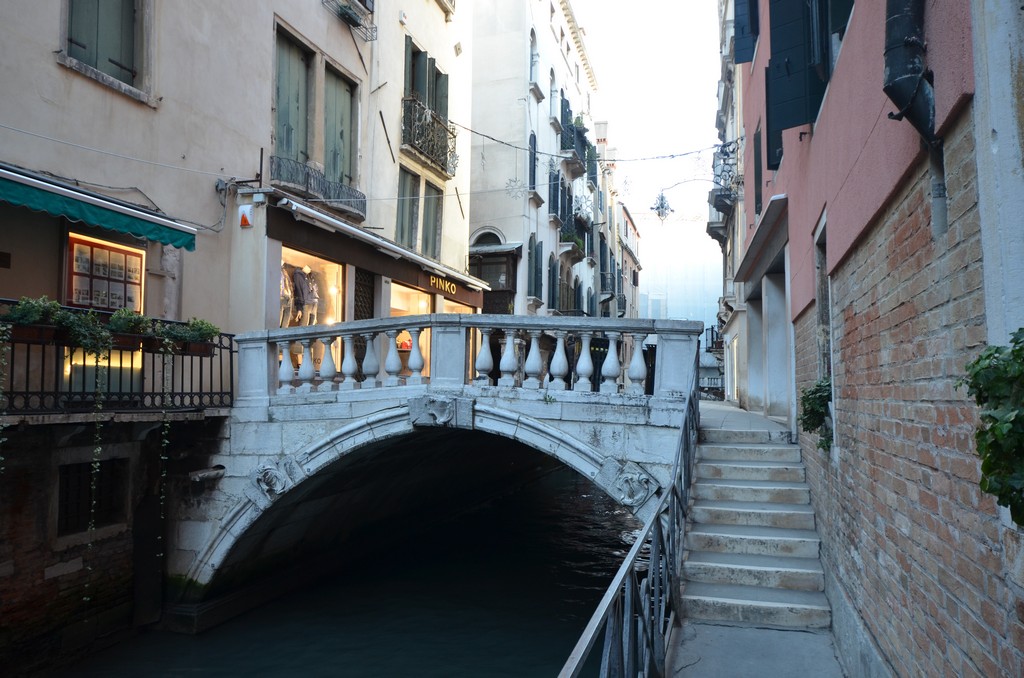 The Bareteri Bridge is a small and very elegant stone structure that crosses the homonymous Rio, in the heart of Sestrere San Marco and its Mercerie. It is so named because of the ancient presence of hat makers (the so-called barètes in Venetian dialect) who once inhabited the area. It has only one arch under which it is possible to pass with a gondola or another small boat. On the bridge there is a small balcony, a projecting wooden structure typical of Venetian building, where the Casino Venier, the city's famous gambling hall, was located, today the seat of a prestigious French cultural association.