The church of San Simeone Piccolo: the lighthouse of Venice

Brief history of the church of San Simeone Piccolo 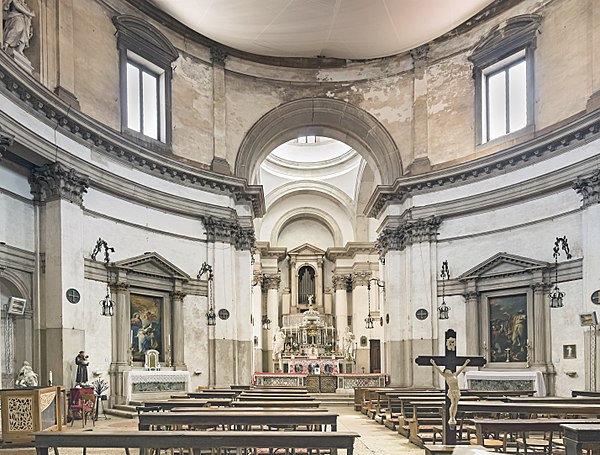 The church of Santi Simeone e Giuda, better known as San Simeone Piccolo, is perhaps one of the best known monuments of the city of Venice. The church stands with all its majestic bulk on the Grand Canal, right in front of the Santa Lucia railway station, dominating the Santa Croce district with its powerful structure. The denomination Piccolo distinguishes it from the nearby church of San Simeone Grande, and indicated its smaller size before the eighteenth-century renovations. The history of the church began in the ninth century at the behest of the Briosi and Adoldi families. In the 11th century, when the city of Venice began to acquire a more extensive and widespread ecclesiastical administration, the church of San Simeone Piccolo was elevated to the rank of parish: its definitive consecration, however, according to some historiographical sources, took place only in the summer of 1271. The first structure of the church most likely had a basilica layout divided into three naves, parallel to the Grand Canal. But this first building showed, in the following years, serious structural problems that led to the choice of a new construction solution. We arrive, therefore, in the year 1718: the chapter of the church, which presented itself administratively as a collegiate, decided to entrust the construction work to the architect Giovanni Scalfarotto, at the time almost forty years old, who until then had not realized great masterpieces. Despite the presence of his name placed in the internal architrave of the pronaos, some historians believe that his role as proto was limited to the simple supervision of the works, and that the design ideas were suggested to him by the client. The works lasted about twenty years and the huge expenses were financed thanks to the singular initiative of the parish priest Giambattista Molin, nicknamed Manera: the organization, that is, of a large public lottery, a sort of popular self-financing of the company. The church was solemnly consecrated in 1738 by Gaspare de Negri, bishop of Cittanova d'Istria. After the suppression of the Napoleonic kingdom, the history of San Simeone Piccolo has had alternating events that have often intertwined with that of his sister, the church of San Simeone Grande. Since 2006 the church has been entrusted by the patriarch of Venice to the Priestly Fraternity of San Pietro, a clerical society of apostolic life of pontifical right founded at the behest of Pope Paul John II in 1988.

Historical-artistic description of the church of San Simeone Piccolo

The church of San Simeone Piccolo, as previously said, is one of the most representative "visual symbols" of the city of Venice, a sort of textbook on the history of architecture in a nutshell for the multiple references used by Giovanni Scalfarotto in his controversial construction: the Roman Pantheon, the church of the Redeemer and the temple of Maser del Palladio, the church of Salute del Longhena, the twin churches of Piazza del Popolo in Rome, these are some of the examples that the architect certainly kept in mind for his grandiose Opera.

The church, in fact, has a Corinthian pronaos with a high base which is accessed via a staircase, which joins a central rotunda dominated by a majestic dome with an oval dome, ending with a lantern in the shape of a small temple. Inside, the circular plan has a rectangular and bi-apsidal presbytery.

But beyond the imposing scenographic system, what are the main works of art that further embellish such a refined jewel?

For example, in the triangular tympanum of the pronaos, the very precious marble relief made by Francesco Cabianca, representing the Martyrdom of the Saints Titulars, work that does not disfigure in front of the great models of Greek temples such as the Parthenon and the Temple of Zeus in Olympia.

Inside, the neoclassical canvases that decorate the altars of the rotunda are of great interest: among the most commendable, the San Francesco di Paola supported by an angel with San Gaetano da Thiene executed by Antonio Marinetti known as il Chiozzotto. But one of the most interesting peculiarities of the church is the splendid crypt, reminiscent of the Christian catacombs perhaps seen through the eyes of the Roman churches of S. Maria in via Lata and the SS. Luca and Martina designed by Pietro da Cortona. The octagonal crypt has a large series of funeral chapels where the most illustrious members of the parish are buried, rooms embellished with a series of frescoes with Stories from the Old and New Testaments, unfortunately in a state of deterioration.

The church of San Simeone Piccolo is located in S. Croce 698, 30135 Venice and is open during the following religious services: