The Church of Santa Maria di Nazareth: the apotheosis of the Venetian Baroque

The history of the church of Santa Maria of Nazareth

The Church of Santa Maria di Nazareth, better known as Church of the Scalzi is among the most important monuments of the Venetian District of Cannaregio. Located near the Santa Lucia Railway Station, near the Ponte degli Scalzi, the church is an authentic masterpiece of the late Venetian Baroque, and represents an unmissable destination for your "tourist pilgrimage to Venice". The construction of the sanctuary began in the 18th century at the behest of the Discalced Carmelites who had obtained permission from the Senate of Venice to build a new monastic complex. So, after some initial difficulties, the religious purchased gardens along the Grand Canal in the area of ​​Santa Lucia in order to finally build the much desired church and monastery. The Carmelites commissioned the famous architect Baldassarre Longhena to build the sumptuous building. The prestigious facade, however, built thanks to the funding of the noble patron Gerolamo Cavazza was conceived by another important architect of the time, Giuseppe Sardi, between 1672 and 1680. The church was then solemnly consecrated only at the end of the work which took place in 1705, and was affected by major restoration works carried out between 1853 and 1862 on commission from the Austrian government.

Art and beauty in the Church of Santa Maria of Nazareth 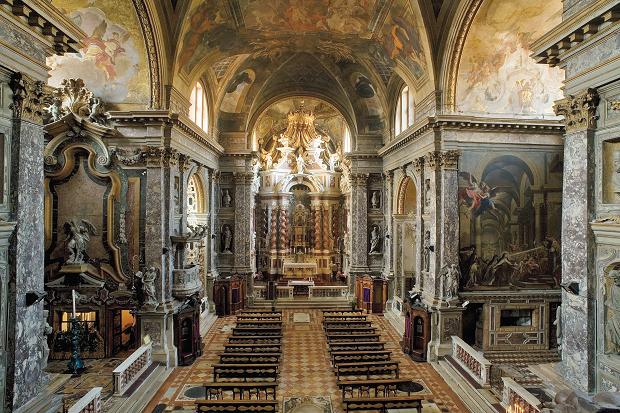 Your stop in the Carmelite church of Santa Maria di Nazareth must begin with a careful observation of the magnificent facade which gives the church its fairytale "magic castle" appearance. Built on two orders marked by paired columns placed on high bases, the facade houses in its niches a series of statues attributed to the Swiss-Italian sculptor Bernardo Falconi. The artist's fine executions will "guide you" to your entrance into the church where numerous masterpieces and many important testimonies of the history of Venice await you. Conceived by Longhena with a single nave with side chapels, with a deep raised presbytery introduced by a triumphal arch, the structure of the building immediately projects your attention towards the magnificent high altar designed by Fra Giuseppe Pozzo: a colossal canopy supported by twisted columns, Mindful of Bernini's church of San Pietro, it welcomes and protects the tabernacle of the canteen from the island of Santa Maria di Nazareth to which the church is named. Twelve statues of sibyls made by the chisels of Giuseppe Torretto, Giovanni Marchiori, Pietro Baratta, Giuseppe and Paolo Groppelli act as a court for the colossal structure, a marble reinterpretation of the famous Michelangelo sibyls of the Sistine Chapel.

But the beauty of the church certainly does not end here. In fact, a tour of the chapels of the sanctuary will allow you to appreciate other numerous treasures and discover the history of the most important Venetian families of the time: in the Giovanelli chapel, the altar designed by Ludovico David with the statue of San Giovanni della Croce is worth mentioning made by Bernardo Falconi; in the Ruzzini Chapel, on the other hand, the altarpiece with the Ecstasy of Santa Teresa created by Heinrich Meyring and the fresco by Giambattista Tiepolo representing La Gloria di Santa Teresa is of great interest; in the Snail chapel, you should not miss the moving marble crucifix by Giovanni Maria Morlaiter and another important fresco by Tiepolo depicting Christ in the Garden of Gethsemane. In the Venier chapel, however, the splendid San Sebastiano still created by Falconi and the moving post-mortem dialogue between the two brothers Sebastiano and Angelo Venier immortalized by two splendid busts still to be attributed to Falconi are unmissable. But from the historical point of view the most important is certainly the Manini chapel where the remains of the last doge of the Serenissima Ludovico Manin, died in 1802. Here ends your adventure in the Carmelite church, in front of the last of the glorious commanders Republic of Venice.