The Church of the Madonna dell'Orto: the "house" of Tintoretto

The Church of the Madonna dell'Orto: the history The Church of the Madonna dell'Orto is certainly one of the most important monuments of Venice, among the unmissable of the Cannaregio district. The sanctuary was built around 1350 at the behest of the Umiliati congregation, led at the time by friar Tiberio da Parma: the new building was dedicated to God, to the Blessed Virgin and to Saint Christopher, protector of travelers.

The singular name of the church derives from an anecdote of the time: the Venetian sculptor Giovanni De Santi was commissioned with a statue of the Madonna by the parish priest of Santa Maria Formosa, who however rejected the work; then the artist temporarily placed the statue in his garden, where the sculpture began to emit strange glow especially at night: the news spread and the garden became a pilgrimage destination for the citizens in veneration of the statue. The bishop of the Venetian cathedral asked De Santi, therefore, to place the work in a public church to avoid the proliferation of religious fanaticism and unsuitable forms of worship. It was then that the artist proposed to the friars of the newly formed church of San Cristoforo to welcome his work, provided that they accepted 3 of his conditions: to be buried at his own expense there where he had found the statue, a mass was celebrated his honor forever and above all, a huge sum of money. The friars accepted the first two requests but did not have the necessary sum to satisfy even the third request: the statue was then purchased by the school of San Cristoforo and finally made its official entry into the church in 1377. In 1414 the sanctuary was definitively consecrated to the Madonna dell'Orto from a resolution of the Council of Ten. And it will be the Council of Ten to dismiss the Humiliati in 1462 and to give the administration of the church to the Regular Canons of San Giorgio in Alga.

The complex history of the convent, however, does not stop here: from 1669 to 1787 it was the Cistercians who administered the sanctuary; in 1810 the church became the oratory of San Marziale, and then definitively became a rectory in 1875. Last stop, 1931, date on which the church was entrusted to the Congregation of San Giuseppe di San Leonardo Murialdo.

Art and beauty in the church of the Madonna dell'Orto 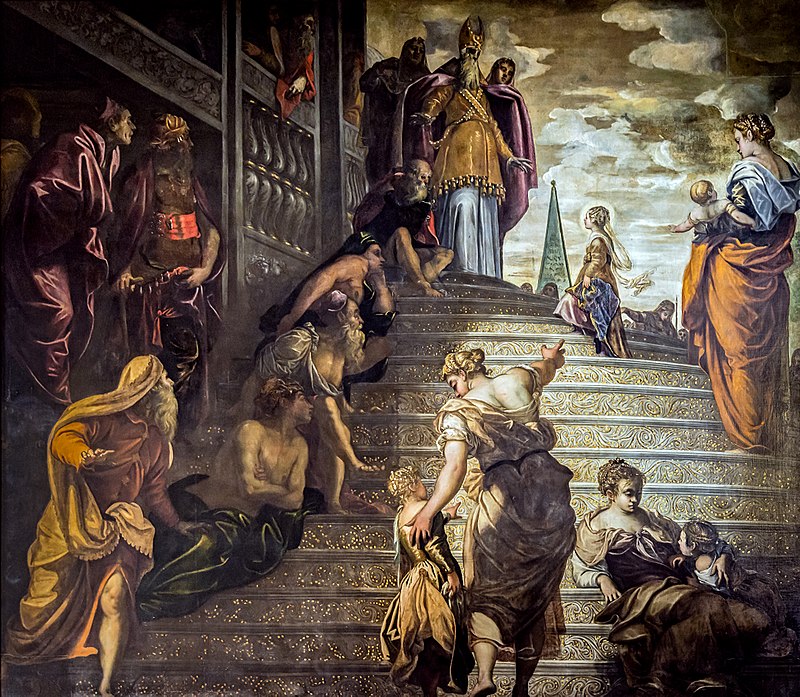 The Church of the Madonna dell'Orto offers the visitor a wide range of works of art.

Of great interest is certainly the façade, which rises proudly and high above a large churchyard, a feature not at all obvious here in Venice: divided into 3 partitions that anticipate what is then the internal spatial scan. The four large pilasters, authors of this subdivision, stand out for their grandeur, enriched by gothic-style aedicules in which the statues of Prudence, Charity, Faith, Hope and Temperance are kept, including that of the central cusp. The two side parts are sloping and lower and characterized by large four-windowed windows ending with 6 arched niches on each side containing the statues of the Twelve Apostles. The central part of this imposing façade is dominated by the presence of a central rose window that allows light to penetrate inside the church, and from the entrance door, a sculptural work by Bartolomeo Bon, with the statues of Saint Christopher and the lateral statues of the Madonna and of the Archangel Gabriel, to be attributed to the chisels of Antonio Rizzo and Giovanni Fiorentino .

The interior is marked by three naves, and is characterized by a rectangular plan without a transept: dominating the space are the exquisitely chiselled wooden coffered ceiling and the polychrome floor with geometric designs that creates a perfect balance with the regularity of the top decoration. The presbytery is spectacular, crowned by a pentagonal apse.

The fame and beauty of the church are undoubtedly linked to the name of the famous painter Tintoretto who lived in the nearby Campo dei Mori. The Robusti, in fact, left in the sanctuary ten splendid works and not only: in the left side of the apse rest, in fact, the "sacred remains" of the artist. What better testamentary bequest!

The rich picture gallery of the church is also enriched by other masterpieces, among which the canvas depicting Saint John the Baptist among Saints Peter, Mark, Jerome and Paul, made by Cima da Conegliano by 1495 and the poignant Crucifixion performed by Palma il Giovane for the church of Santa Ternita and here moved.

Of great interest are also the four funerary chapels built on the left side of the church, which house the remains of four of the most important Venetian patrician families: the Valier chapel, the Vendramin chapel, the Morosini chapel and the Contarini chapel. The interesting historical-artistic mapping of the Venetian nobility continues on the right side with the splendid funerary monument of Girolamo Cavazza, diplomat of the Serenissima, built in 1657 to a design by Giuseppe Sardi.

The visit ends with the splendid pipe organ placed on the counter-façade, one of the most important in Venice.

The fascinating journey into the church of the Madonna dell'Orto, between Death and Beauty, ends with the splendid bell tower that with its 56 meters stands triumphant over the entire northern lagoon, inviting visitors and tourists to pay tribute to Tintoretto and the others protagonists of the magical Venetian sanctuary.

The church of the Madonna dell'Orto is located in the Sestiere Cannaregio and respects the following opening hours:

The main entry rates are: