The Neoclassicism in Venice: Grassi Palace, extraordinary museum, residence of a ghost

And if I told you that Palazzo Grassi is the last great building built in Venice on the Grand Canal? Yeah, this is precisely the last patrician residence built in the city before the Republic of Venice decayed. Thus marks the end of a great age.

We are in the eighteenth century, when the exasperations and excesses of the Baroque had a bit 'tired and you felt the need to undress the decorations and golden stucco to return to a sober and elegant style, which would return to the origins of the classic traditional lines of architecture of ancient Rome: here comes the Neoclassicism, that is a new classicism, ancient but very modern.

And in the Lagoon the Palazzo Grassi is the representative sign of this new artistic movement, in good company with the Teatro La Fenice and the Church of San Simeon Piccolo, which is the very first thing you see in Venice if you arrive by train.

An ambitious project: the Grassi family and palace

The history of the Palace is rather troubled, having had so many owners, each of which has adapted it to their needs, not always respectful or suitable for such a dwelling.

But let's go step by step.

It is the beginning of the 700 when the family Grassi, economically wealthy, bought a noble titlewill buy a noble title.

Grassi fresh fresh nobles decided to erect a palace that could celebrate and manifest this new social status and their greatness: greatness that was exclusively economic, since they never had a role or weight in the institutional and governmental life of the city. Moved by a great fervor, they bought a series of properties located between Grand Canal, Campo San Samuele and the calle behind.

It is 1732. The family moved to the already existing and prosperous residence on the Grand Canal, which is already a good fortune, but for Giovanni and Angelo Grassi it was not enough. Then, still putting their hands back to their substantial heritage, between 1736 and 1745 they also bought all the other neighboring properties: a large lot of irregularly shaped, that of a trapeze, came out.

Solemn and imposing: the structure of the building

A palace was commissioned that was solemn and imposing, with a luxurious and elegant interior. So it was and in 1748 the first stone was laid. Unfortunately, the Massari in 1766 had time to die without being able to complete the work; but the works were so advanced that it was not necessary to replace them, and they were safely completed after only 6 years.

A building whose layout follows the shape of the lot, and therefore takes a trapezoidal shape and is articulated around a large central courtyard and a back garden, with a ground floor, a noble floor, a second and an attic.

Three floors in which the individual elements seem to have been carved in the typical Istrian stone: an imposing and slender façade, but at the same time capable of expressing all its lightness in the pèrogressive passage from the base to the crowning cornice.

The scanning of the openings forgets the geometry and the regularity of the Renaissance and Baroque palaces, to return to the examples of the Byzantine and the Venetian flowery Gothic.

The architecture of perspective: a theatrical choice 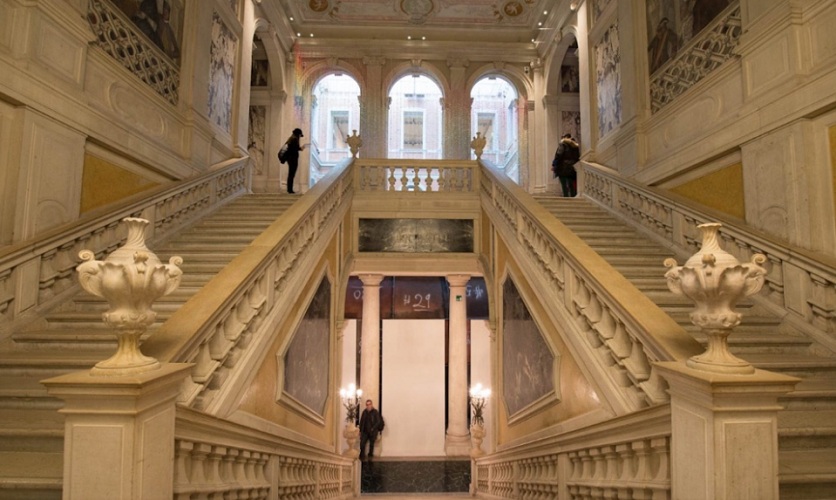 Inside, the magnificent perspective game bank-atrium-courtyard-staircase extends the space that seems to have been conceived as a space to accommodate.

The idea of placing the staircase in a position opposite the main entrance is extremely interesting and intelligent, because to reach the main floor you need to reach the staircase and then walk the entire hall and the courtyard: a choice, that of Massari, almost theatrical , forcing us to travel all the ground floor, making us participate in all the monumentality of space.

Also worthy of note is the side façade on Campo San Samuele, which gives access to the interior of the building. Once you have crossed the entrance, the inner courtyard opens, which as we shall see later was closed by a glass roof: the ground floor is colonnaded, which offers a pleasant play of perspectives, the first floor and the second one with windows.

The life of Palazzo Grassi was not so simple: since in 1772 the family became extinct with the loss of Paul, last male heir, The building has changed many properties, not all have however, brought benefits and respect, but then led him to the current state.

Among the many owners we certainly remember Giovanni Stuckey, an industrialist of Swiss origin, owner of a mill at the Giudecca, now home to the homonymous and luxurious hotel, which had the merit of bringing electricity to the building. This was followed by the Venetian Real Estate Company, which was a cross and delight: it was the first step towards the museum destination, had the internal courtyard closed with a Murano glass structure, had a small theater built inside the courtyard, but had the other the ancient and original paving of the courtyard in gray trachyte and white drawings in Istrian stone, replaced with one in polychrome marble, which although inspired by the original can not compensate for the serious loss.

Giovanni Agnelli and the architect Gae Aulenti: the first restoration

1984 is an important year as Palazzo Grassi S.p.a. and became the property of the Fiat Group of the then president Avv. Gianni Agnelli. It is with the property of Agnelli that the first major restoration is carried out by the architect Gae Aulenti: the building came to this moment as a confused place, where it was difficult to understand how much had remained of the original dwellings desired by the Grassi and how much it was fruit of the unfortunate interventions of which he was the victim. The works directed by architect Aulenti were conceived by a principle of respect and reconstruction of the structural integrity of the building, capable of making us enjoy today an palace that is more similar to the original. The beautiful era of Fiat ended in 2003 with the death of the lawyer Agnelli.

Francois Pinault and the architect Tadao Ando: the second restoration

After only 2 years the building was bought by the current owner, the French magnate Francois Pinault, looking for a container to display his private collection of modern and contemporary art.

The new owner decided to renovate and modernize the building and entrusted the work to a Japanese archistar: Tadao Ando. The Japanese architect made a minimal and non-invasive, sober and neutral, playing mainly with the light, natural and artificial, as Palazzo Grassi was born following a clever play of lights that entering from the entrance to the water and the courtyard shaped the interior space, and because in an exhibition container the light is nothing else the added work of art: Ando did not disappoint the expectations and did not betray his language always characterized by simple and neutral lines combined with beams of light that with their refraction shapes the space.

The museum does not have a permanent collection, but is constantly updated and transformed according to the artists and their works and installations: it is a structure that, although rigid, merges with the exhibition functionality that allows a perfect usability of the spaces, designed It was born as a home for the exaltation of the Grassi family and has become a wonderful, perfectly functional reception space.

So you could find on your trip to Venice the building closed for refurbishment between an exhibition and another ... well, I recommend you plan a new trip to the city because the museum certainly deserves a visit.

maybe you do not know that...

Are you afraid of ghosts? Well, this could be a problem because according to a legend it seems that the building is inhabited by the spirit of a girl wandering through her rooms: it is a girl who died suicidal inside the palace after suffering violence in the early 1900s Usually, this young woman shows herself to women, as the museum employees tell us, who often hear their name called in a slight hiss. But the strongest testimony comes from a vigilante who during a night ride heard a female voice that shouted to stop him: amazement and fright, he lit the torch in his possession and realized that if that voice had not stopped it would fell into an open pit on the floor for the renovations that were taking place at that time. The spirit of that girl had saved his life. It is, then, a good ghost, not one of those who go around with the chains for which you do not need to accompany you to the Ghostbusters!