"It is a source of pride for the whole of Venice to return to being able to boast of the charm of a place like the Royal Gardens. A green area of excellence in one of the areas richest in history of the city, which, for this reason, assumes even more significant and strategic value from the environmental point of view.

It is with these words that the mayor Luigi Brugnaro the 17 December last started the ceremony of inauguration of the Royal Gardens of Venice after a long period of closure due to major maintenance and restoration work.

Venice does not have many green spaces, and those few that there are Venetians keep them tight. And it is from this love for their city and their history that 5 years ago this maintenance process began in order to restore the splendor of the ancient gardens to citizens and visitors.

We should always remember that there is no future without historical memory!

The history of Napoleon's Gardens 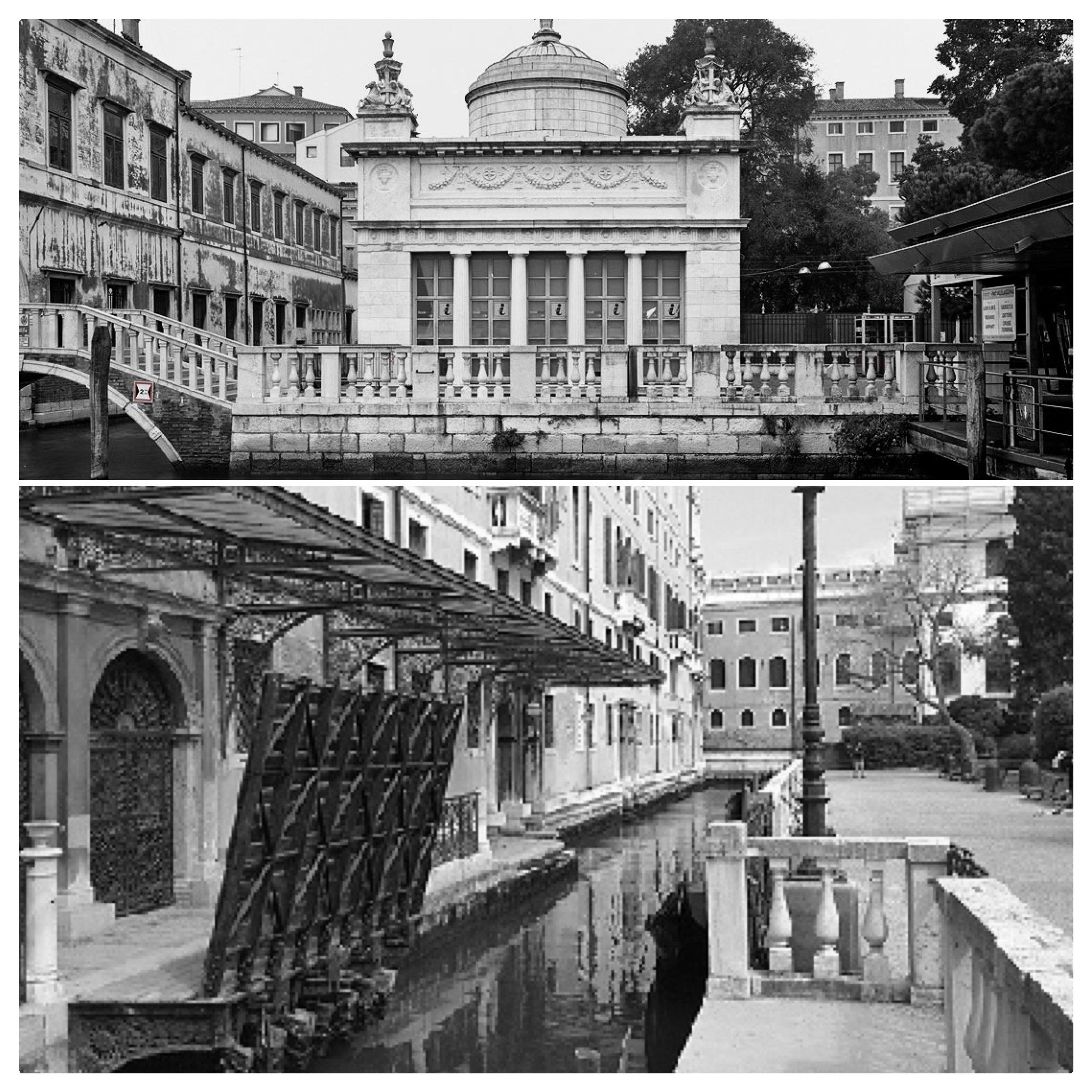 You may know the Royal Gardens as well as Napoleon's Gardens. After all, it is correct, because they were part of the extensive project of revaluation and restructuring of the entire Marcian area strongly desired by the French emperor.

The strong signs left by this urban intervention were the demolition of the Church of San Gimignano in Piazza San Marco, which was the perfect element of connection between the Procuratie Vecchie and the New ones, with the subsequent construction in its place of the Napoleonic Wing, and the designation of the Procuratie Nuove as Palazzo della Corona, residence of the reigning viceroy Eugene of Beauharnais, son of the wife of Bonaparte. But there is no royal palace without sumptuous gardens that can delight its residents. The royal architect Mezzani, who succeeded his colleague Antolini, took great care with the design: as a place it was chosen the area behind the Procuratie Nuove overlooking the San Marco basin and for this reason the Terra Nova granaries that occupied the area were demolished. Well, certainly a splendid location for the gardens, guarded by the shadow of the Bell Tower and looking towards the Lagoon and the Church of San Giorgio Maggiore, gently kissed by the sun during the hottest hours of the day.

Mezzani created the classic and elegant Italian garden, characterized by the presence of a series of geometric elements that are repeated harmoniously. Separated from the Riva by low stone and brick walls surmounted by a slender gate, protected by gates decorated in French style, they were to be the external extension of the Procuratie.

After politically decayed, the Austrians, who had taken over the management of the city carried out major interventions: to get closer to the taste of the English gardens, two small groves were inserted on the right and left margins, the two main entrances were reinforced with the creation of 2 tree-lined avenues that from the Riva reached the Rio della Zecca, intersected then by a long longitudinal boulevard that ran parallel to the Rio and the external Riva. The architect Lorenzo Santi, later, distinguished himself for the realization of a refined Cafè Haus in neoclassical style with a large iron and glass greenhouse on the side towards Calle Vallaresso and a smaller greenhouse on the opposite side towards the Mint, and especially for a light elevated bridge that serves as a connection element between the inside and outside, allowing direct access to the gardens from inside the Procuratie.

We are in the middle of the nineteenth century when the last intervention in the Gardens is carried out: the cast iron pergola was raised, delightfully decorated with floral motifs, to protect the existing avenue: 23 spans of about 3 meters each for a total of 70 meters of covered promenade.

The gardens remained "royal" until 1920, when the crown left them to the City: from that moment they were always open and accessible to the public.

The rebirth of the Royal Gardens: architectural, landscape and botanical restoration 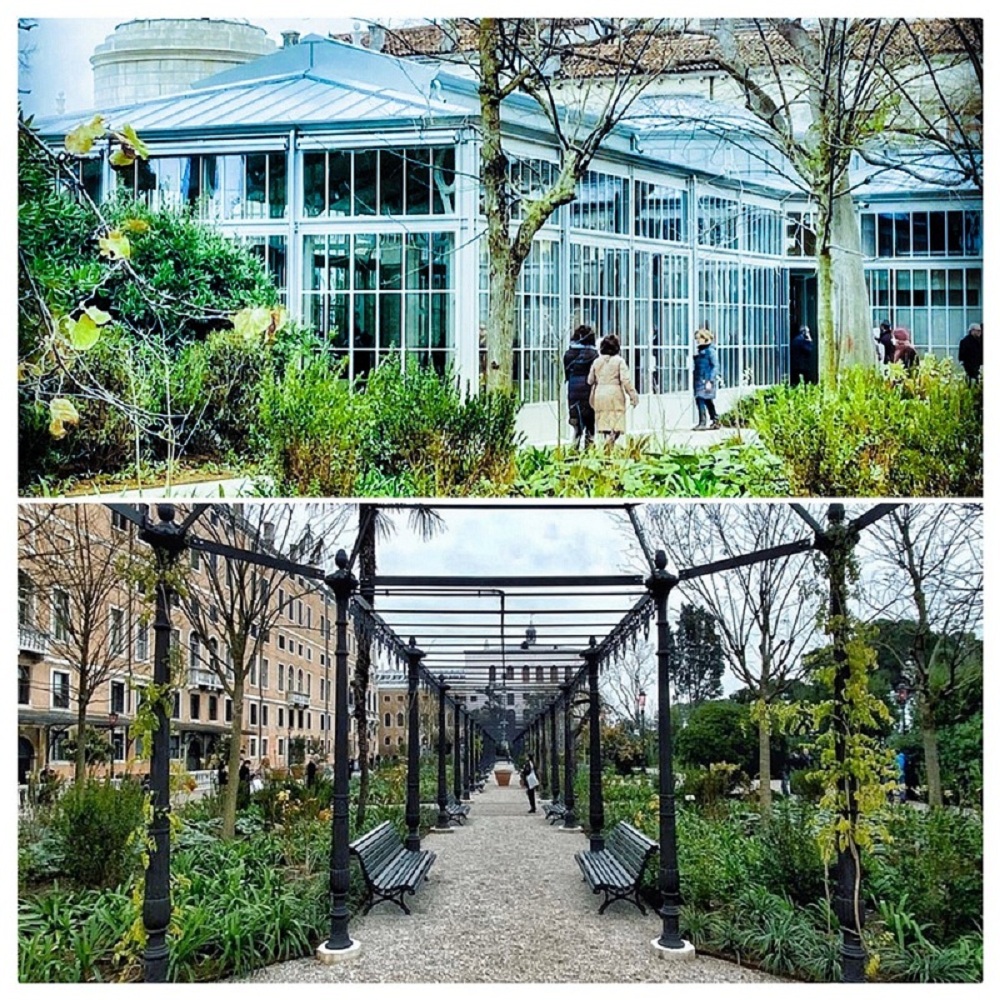 The intervention concerning the Giardini Reali was complex and articulated and put an end to a state of abandonment that had reigned for many years. Too many.

The city was given back a small jewel set in one of the most beautiful places of the Lagon thanks to the joint venture between the City Council and the Venice Garden Foundation: the entire operation was divided into several aspects, concerning the architectural restoration, one landscape and one botanical.

From an architectural point of view, the nineteenth-century structures of the Santi were restored, giving them a new life. The neoclassical pavilion has preserved the ancient function of Cafè Haus, while the greenhouse has been invested with new functions: the east wing houses "The Human Garden" a place where it will be possible to host artistic, cultural and research activities promoted by the Venice Garden Foundation; the west wing has been destined to host the services and the plant section. The small greenhouse, on the other hand, will return to its former glory with an important collection of potted plants and all the garden equipment.

As far as the landscape is concerned, it was decided to return to the sobriety and elegance of the English gardens, which had made their first appearance in the 19th century by the Austrians: the designs of the geometric elements have been streamlined and simplified, creating a fascinating Mediterranean atmosphere.

But of great importance was undoubtedly the botanical restoration, careful and well thought out, which gave the opportunity to see numerous species of grasses and flowers planted in the city. The numbers are remarkable: there are about 22 tall trees, 832 shrubs, 6560 herbaceous species, 3150 bulbous species, 68 different climbing plants, 1 Japanese wisteria that will flower in spring, for a total of 5000 square meters of surface.

The intervention, finally, has eliminated all those structures and superfetations that had been incongruously added over the years and completely out of place.

"It is the time you have lost for your rose that has made your rose so important": a garden is like a small man, every day it must be nourished and protected to allow it to carry its species forward through the centuries.

Now that they have been returned to us, let us take care of them.

The entrance to the Giardini Reali is in Riva degli Schiavoni, at the exit of the pier of the ACTV line "San Marco Giardinetti", and is completely free and respects the following times: