Venice is an extraordinary city in itself, and this is commonly known, but there is a time of day when its streets and canals are filled with a special light that makes everything more magical: sunset. The whole city is bathed in the golden light of the setting sun, which makes every corner of the city glow, and if you're in the right place you can see an authentic wonder. Let's discover together seven spots to watch the sunset in Venice.

The Ponte dell'Accademia is one of the four bridges in Venice to cross the Grand Canal and it connects the district of San Marco to that one of Dorsoduro. It was built during the Austrian rule and opened to the public in 1854; until then the only bridge over the Grand Canal had been the Rialto Bridge. Over time it has undergone several reconstructions, due to some static problems of the initial steel structure. Today the bridge is made of wood and steel. The bridge is known for its wonderful view over the Grand Canal and if you go up its steps at sunset, you will see the sky behind the Basilica of Santa Maria della Salute turning orange and pink, creating a breathtaking view. 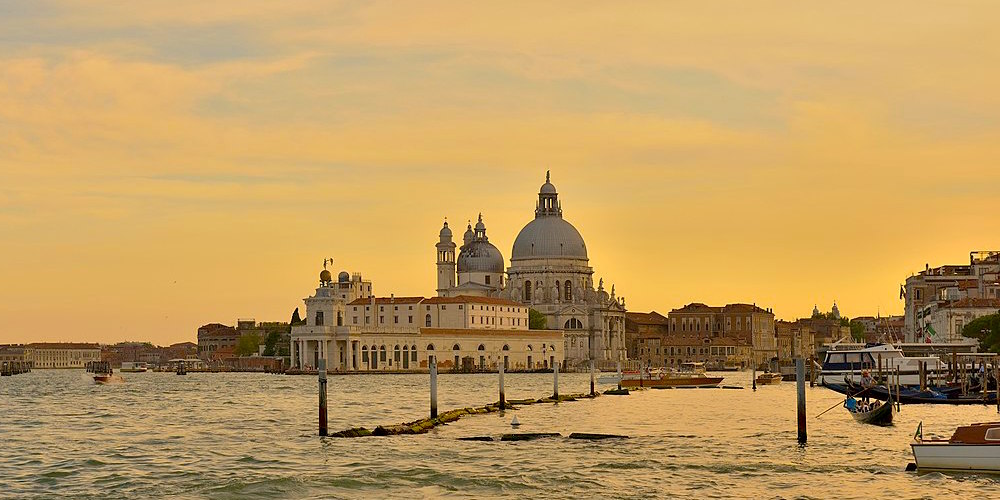 Located in the Dorsoduro district, Punta della Dogana is a triangular area stretching between the Grand Canal and the Giudecca Canal, from which you have a full view of the San Marco basin, the San Giorgio island and the Giudecca island. From this point the sunset will be behind you but you will be able to admire St Mark's Campanile, the Doge's Palace, the Church of San Giorgio Maggiore and the whole San Marco basin being magically bathed in a golden light. 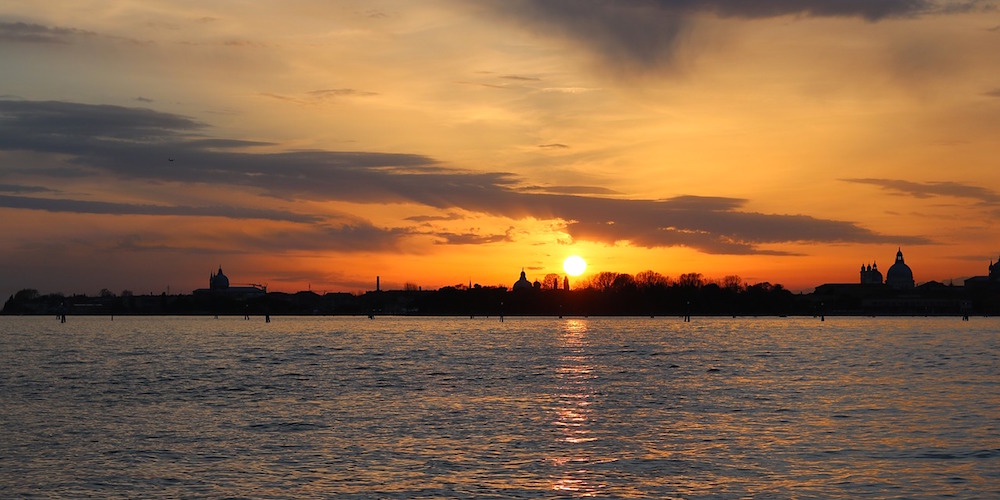 If you want to enjoy the sunset while walking and feeling the sun on your face, just walk along the long Fondamenta delle Zattere. Located in the Dorsoduro district, from here you have a complete view of the Giudecca Canal, as the fondamenta runs along the canal for about one kilometre. Being a very sunny area, it is perfect for strolling around at sunset or for admiring it while sitting in one of the many bars, restaurants or ice-cream parlours in the area.

In front of St Mark's Square there is a small island, the island of San Giorgio Maggiore. It is characterised by the Basilica di San Giorgio Maggiore, whose majestic façade is the outstanding feature visible from St Mark's Square. The basilica was designed by Andrea Palladio and its 63-metre-tall bell tower offers a unique panorama over Venice and its lagoon. From here you can watch the sun go down over the Serenissima. 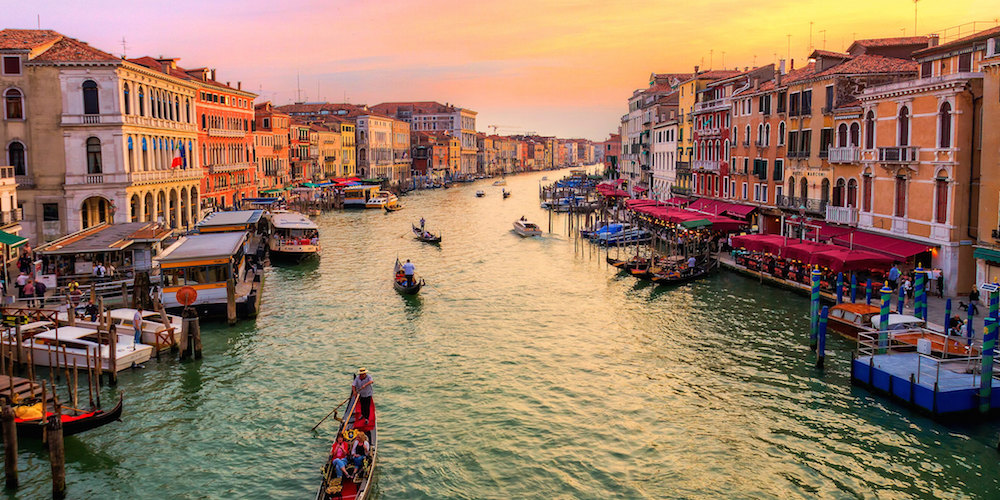 The Fondaco dei Tedeschi is a Renaissance palace, located in the San Marco district, that overlooks the Grand Canal and the Rialto Bridge. During the Venetian Republic, the Fondaco dei Tedeschi had the function of warehouse for goods transported by German (Tedeschi in Italian) merchants from Nuremberg, Judenburg and Augsburg. With the fall of the Republic in 1797, the building lost his function. In 2016 the palace was reopened to the public as a shopping and cultural centre, and its panoramic terrace offers a 360° view of Venice. From this terrace you can enjoy a different sunset, watching the Grand Canal and the Rialto Bridge from above while the setting sun colours them (please note that the access to the terrace is free, but you need to book in advance).

Sunset on the lagoon: Pellestrina 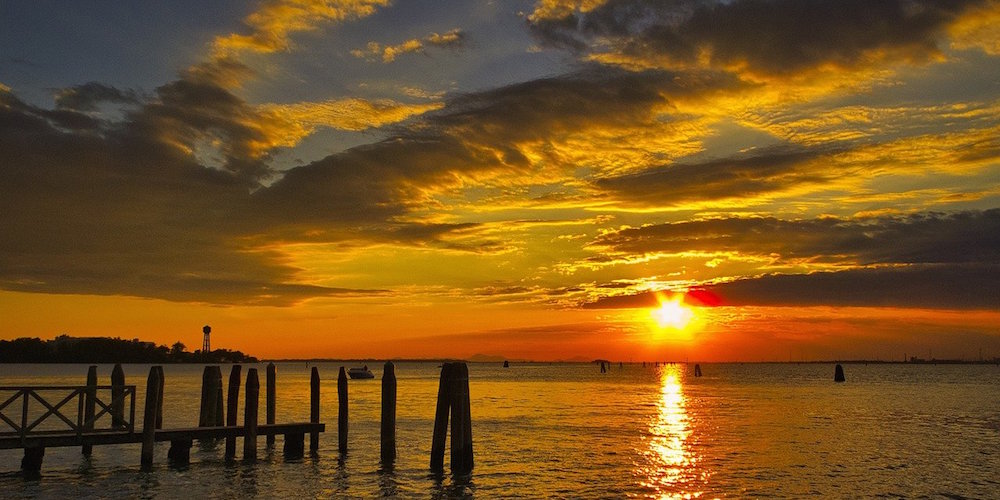 One of the most beautiful things you can witness in Venice is watching the sun setting over the lagoon. In order to do this you will need to leave Venice to reach one of its islands; the choice is varied but we recommend that you visit the Pellestrina island, far from the numerous tourists. The lagoon borders with the island to the west and from here you can watch the sun slowly disappearing into water along the horizon while the landscape turns red. 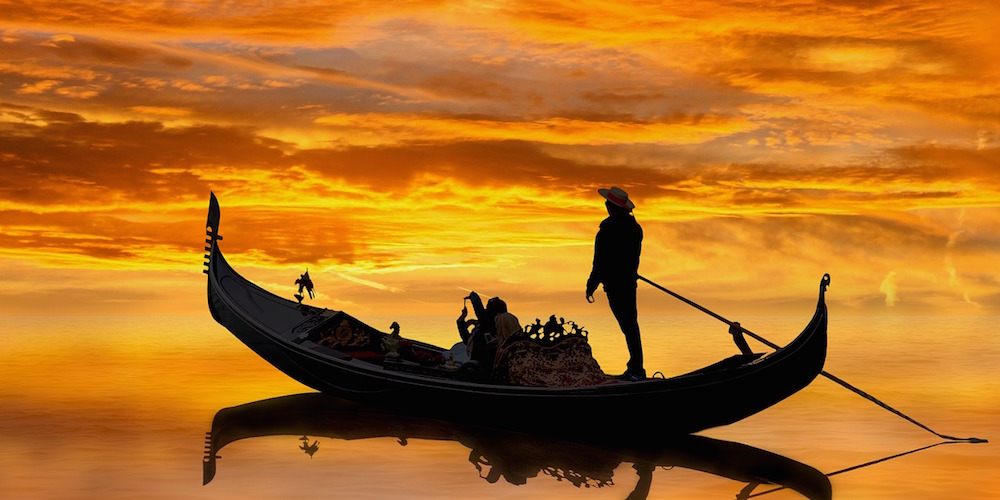 Another way to fully enjoy the sunset in Venice is to take a gondola ride at dusk. The perfect way would be leaving from the pier near St Mark's Square and sailing into the San Marco basin, admiring the changing colours of the sky reflected in the canals.