Commonly called the "little Venice", Chioggia is a town of fifty thousand inhabitants a few kilometers away from the older venetian sister: Chioggia is a city rich in history, art, places of cultural interest but it is also a well-known seaside resort and summer destination loved by the Venetians and beyond.The small town of Chioggia is cut into slices by various canals connected by bridges, and this particular shape makes it very similar to Venice but unlike the Serenissima, is passable by cars and public transport.

A bit of history of Chioggia

The term "Chioggia" would derive from "cluzia" which means "artificially built", as the first settlements were built thanks to human intervention on the lagoon-island environment, otherwise unlivable and subject to submersion.

But the origin of Chioggia is linked to classical mythology, in particular to the legend of Aeneas, the mythical Trojan hero who fled during the Trojan war and landed on the Italian peninsula. Here Aeneas, together with his companions Antenore and Aquilio, founded Clodia, who later became the current Chioggia. In 2000 BC, the people of Pelasgi navigators settle and take possession of the cities of the upper Adriatic including Clodia.

In Roman times, the city underwent a huge change from an urbanistic point of view and became a popular destination for its salt pans, which at the time were considered among the most valuable. Today the salt pans are no longer in operation but for centuries they have been the engine of the city's economy. After the collapse of the Roman Empire, the area of Chioggia underwent numerous occupations by the Nordic peoples but over the years it has managed to maintain a certain autonomy. In fact, it was around the seventh century that a tribune was elected that governs the city and participates in the confederation made up of twelve islands in the lagoon, namely Grado, Bibione, Caorle, Eraclea, Equilio, Torcello, Murano, Rialto, Malamocco, Poveglia, Chioggia Maggiore and Chioggia Minore: thus was born the first nucleus that will constitute the future Republic of the Serenissima.

Later the region was conquered by the Franks whose king, Charlemagne, did not like the autonomy of the nascent Republic and at the beginning of 800 AD. attack the confederation. In the long wars that followed, Chioggia was forced to succumb and suffered two fierce destructions, the first in AD 810. and the second in 902 AD. At the end of the conflicts, the Venetian Republic is saved, even if seriously affected.

In 1380, after a conflict with the Republic of Genoa, Chioggia was accepted by the Serenissima Republic of Venice and remained an integral part of it until 1797, the year in which Napoleon Bonaparte imposed his power on half of Europe, including Venice. Following the Campoformio treaty of 1797, the city became the property of Austri and remained Austrian until 1866 when it was annexed to nascent Italy after the third war of independence.

It is a pleasure to remember an important undertaking that saw the inhabitants of Chioggia protagonists during the Second World War, who turned against the Nazi fascists who surrender before the arrival of the allies. It was April 27, 1945, the day of the liberation of the city. After refreshing your memory with a brief reconstruction of the history of Chioggia, we just have to go into the its calli and discover this little Venice up close.

The Cathedral of Santa Maria Assunta is the main church of Chioggia, the mother church of the diocese of the same name. The origins of the place of worship are not clear, according to the thesis of some historians, the building was built on the foundations of an old temple and on the night between 25 and 26 December 1623, it was destroyed by fire. The reconstruction works begin in the following year and the project of the new church is commissioned to the architect Baldassarre Longhena, Baroque archistar who will then build the Church of Modanna della Salute and Cà Rezzonico in Venice, who completes the work in a few years.

The structure blends two architectural styles: Corinthian and Ionic. Externally, the church appears very simple: completely covered in red brick, a classic example of Venetian architecture, without decorations and frills, except for the two statues of Saints Martyrs Felice and Fortunato, patrons of the city, imprisoned in two white stone niches of Istria that flank the entrance door. The interior retains the same sobriety, with a Latin cross planimetric layout, divided into three naves dominated by the whiteness of the surfaces on which only a few dark stone capitals stand out. Here is housed a collection consisting of numerous altars, canvases, vertical gravestones and tomb inscriptions. On the sides of the presbytery there are two chapels dedicated to the Blessed Sacrament and the patron saints.

Clock of the Tower of Sant'Andrea The oldest functioning medieval clock in the world is located in Chioggia: we are talking about the famous clock of the Torre di Sant'Andrea. The bell tower of the church of Sant'Andrea was built in 1386 in Romanesque style. Initially, the tower was used as a lookout lighthouse.

The construction of the clock is attributed to the Dondi, a historic family of watchmakers, whose progenitor Jacopo Dondi was the inventor and builder of the mechanical astronomical clock from Padua. Restored several times, during the last of these works, carried out by the Chioggia Aristide Naccari, a marble plaque was affixed with the engraving "This tower, once a bulwark of the city and now intended to spread peals of peace, passed the millennium, it still stands, remarkable for antiquity and memories, after being restored with skill and art in the year of the Lord 1912."

Every year hundreds of watch enthusiasts come to Chioggia to take a close look at the mechanisms that are hidden inside the ancient clock. In 2006, the Clock Museum was inaugurated, a vertical exhibition that offers visitors a path divided into several floors inside the tower. On the ground floor documentaries are projected that collect technical and artistic information on the clock, on the first and second floors the original maps of the Church of Sant'Andrea are observable, the third floor houses testimonies of "religious piety", while on the fourth floor there are exposed the paintings of the "Via Matris", a sort of Via Crucis that represents the pains of the Madonna. But it is on the fifth that the mechanism of the oldest clock in the world is jealously preserved! To admire the splendid panorama of Chioggia, the Lagoon and the Adriatic Sea from above, you need to go up to the seventh floor of the tower and access the bell cell.

Overlooking the Venice Lagoon, Piazzetta Vigo is one of the best known squares in Chioggia. At the center of the square stands a Greek marble column depicting a Leone Marciano, symbol of the Most Serene Republic. The column came to light in 1763 during excavations for the reconstruction of the tower of the old city palace. The lion, a centuries-old symbol of the power of the Republic of Venice, is called "Gato de Ciosa" (cat of Chioggia) by the inhabitants of the city who are not at all proud of their lion because of its small size. Near the square it is possible to cross the Vigo's Bridge, a splendid bridge overlooking the Canale della Vena, the most characteristic of the city: built in stone in 1685 under the mayor Morosini and embellished with marble in 1762, it replaced the wooden one on which it was fought bitterly during the Chioggia war. 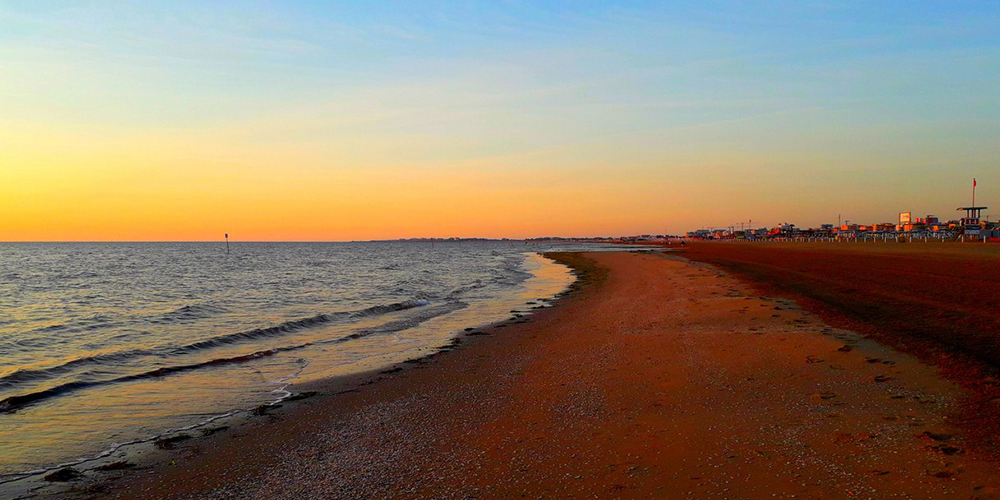 During the summer, one of the most popular seaside resorts in the Veneto is the Sottomarina beach, a district of Chioggia known for its fine sand and for the substantial presence of recreational facilities such as beach volleyball, five-a-side, bocce, tennis and other recreational activities, but also equipped establishments, discos and refreshment points. The beach is about 6 kilometers long and is an ideal destination for families with children, young people looking for fun and couples who want to spend a relaxing holiday. Furthermore, Sottomarina has been known since the seventies for the healing properties of its sand. The high salinity rate of the sand in the area has prompted many visitors to travel to the Chioggia area over the years, to undergo the so-called sandblasting. Sandblasting is a sand-based spa treatment that promotes a golden and long-lasting tan, a typical Chioggia tradition that has made the town famous throughout the country. Fishing has always been the main activity of Chioggia on which the entire economy of the municipality is based (in addition to tourism). As evidence of how important fishing is for Chioggiotti, there is the fish market, the true fishing soul of the city which is located along the San Domenico canal. A comings and goings of fishing boats, boats and expert fishermen populate the narrow streets of the market. Sea or valley sea bass, mullet, indigenous gudgeon, restless eels, red mullet, rafts, cuttlefish, razor clams and clams of all kinds, are just some of the typical fish products of the Lagoon that can be purchased at fish market. A visit to Chioggia cannot fail to be accompanied by a fish dinner. The great wealth offered by the fish market lies in the liveliness of the Chioggiotti, a people strongly linked to their traditions who live 365 days a year in symbiosis with the sea. The desire to keep alive and preserve the ancient maritime traditions is tangible through a walk to the market, here you can observe the activity of the fishermen, touch the products of the sea with your hand and listen to the singular dialect of Chioggia, completely different from the Venetian language.