Christmas 2020: the light of hope in Venice and surroundings

What we are about to experience will undoubtedly be a very different Christmas, one that none of us will ever forget.

It will be a slightly colder Christmas due to the distance from many loved ones and the absence of kisses and hugs, a contact that this pandemic has horribly ripped from us. We need warmth and hope. And what better answer to this need than light? And in Venice, this Christmas 2020 will be one of light to illuminate the dark moment we are living, to bring hope for a return to the normality we all long for.

It will be the light to bring magic, in a sort of spin off that will turn off the sadness to turn on the serenity.

The Christmas of light in Venice

And when it comes to light in Venice, it's no joke, because the presence of water duplicates the warm and muffled effect of the lights that are reflected in it, giving back shades and magical colors. A true magic that only in this city is possible.

For this 2020 the city mixes its millenary history with the most modern technology.

In St. Mark's Square has been installed a Christmas tree very different from those that have illuminated the holidays in previous years: it is the new work of Fabrizio Plessi, already present on the facade of the Correr Museum with The Golden Age, which will light up the Venetian Christmas until January 6, 2021. Located a few steps from the Basin of San Marco, between the Column of the Winged Lion and the Column of San Teodoro, where at the time of the Serenissima, evildoers were beheaded, it is a two-dimensional tree, made by assembling 80 modules that emit golden LED light in constant movement, like the water of the Lagoon that comes to lap it. Like the rough waters in which each of us navigates in this period. But this perpetual motion also wants to symbolize the dynamics of relationships between peoples, between people who were the basis of the growth of the myth of the Serenissima. A tribute to the city, then, that of Plessi, who has never hidden his love for Venice. 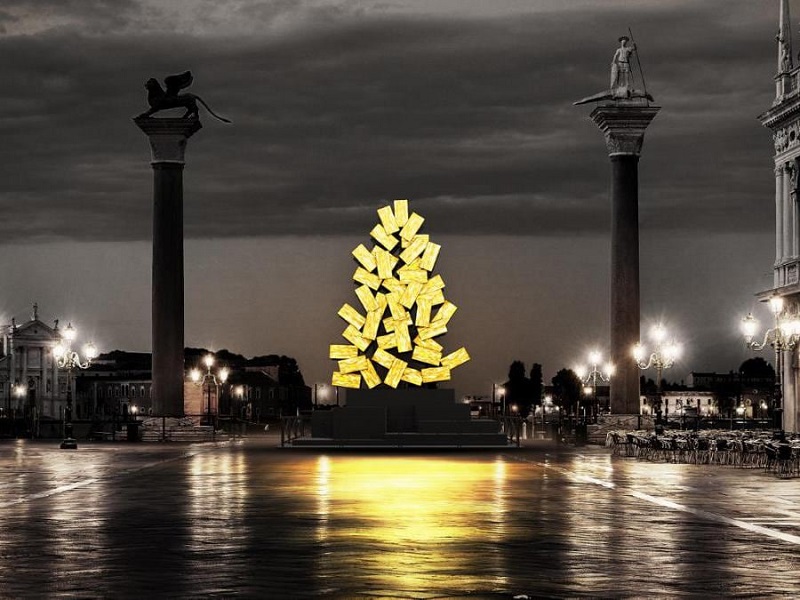 Conceived as a modern and contemporary mosaic, it is inspired by the historical and golden ones that enrich the nearby Basilica of San Marco, imposing itself as a trade d'union between yesterday and today, between present and past. The artist has defined it as a "spiritual emotion that expresses itself in the only language possible today, allowing us to reach out to others despite the physical distance. An evocative sculpture that demonstrates how, once again, it will be the light of art to show the way to overcome these dark times together".

The glow emitted is very strong and manages to invade the entire space between the Doge's Palace and the Marciana Library.

But will this technological and modern light be enough to warm up this cold and strange Christmas? I am not sure. Perhaps this Christmas, precisely because it is so unusual, made of distances and lacks, of forced renunciations, deserved a greater embrace, a warmth that this work, cold in its marvelousness, has not been able to give. It was not able to give us. The installation on the Rialto Bridge is a different story. The beating heart of the city, its true emblem, for this Christmas is transformed into a history book, which tells the most beautiful pages of the past of Venice. The white marble of the bridge becomes a canvas on which are projected colorful images that retrace the facts and characters that have contributed to the greatness of the Serenissima: from the importance of trade with the Eastern world, the mixing with unknown peoples and ethnic groups, to the great protagonists of art and architecture that have made, with their art, Venice the most beautiful city in the world.

This installation also acts as a link between this Christmas and the celebrations for the 1600 years since the founding of the city, as Luigi Brugnaro, Mayor of the city, commented: "Tradition and innovation are the keywords of Venice, even more so for this Christmas 2020 in which the game of projections and fades that will illuminate the Rialto Bridge go in this direction. The City, despite the dark months that it is facing, wants to restart and the start, also through this installation, of the celebrations for its 1600 years, demonstrates its resilient strength. For this reason, seeing one of the symbols of the city become the protagonist of this Christmas is an important tribute to the history of all Venetians. Images that will surely go around the world to tell the story of a city that continues to live and will be ready to welcome new visitors." 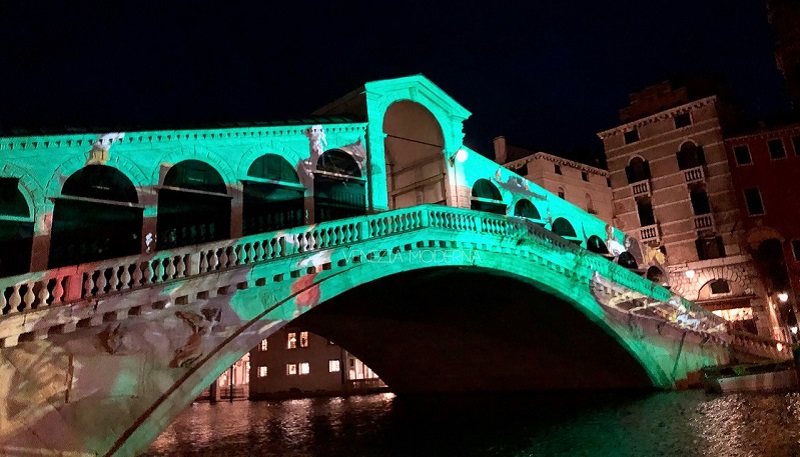 The projections will be repeated several times, like a small real short film, starting from sunset, when the natural light is turned off.

Once again Venice shows us how art can not only unite even at a distance, but becomes a real beacon that illuminates the path of each of us towards a better future.

In Burano Baby Jesus is born on the water

In a place whose main element is water, it is almost normal that even the Baby Jesus is born on the water.

And that's how the Nativity was born off the colorful island of Burano: a wooden crib that emerges from the waters of the North Lagoon and is covered by the sunny sky during the day and starry at night. The background of the grotto is Murano and Venice. A poetry of images that only this city can give.

This fascinating work was created by Francesco Orazio, a greengrocer by profession and visionary artist by passion, who made the 60 silhouettes that make up the composition and were well planted on the bottom of the Lagoon with stakes. "For a couple of hours a day," explains Orazio, "the feet of the statues are exactly at water level."

A magical and poetic effect, because it is beauty we must feed on.

The Christmas of rebirth in Mestre

What Mestre is about to experience will be a Christmas of rebirth, illuminated by the "lights of hope, solidarity and closeness": these are the words of Luigi Brugnaro who lit up the city's illuminations. And how can you blame him? At a time when closeness is frightening and even forbidden, trying to be all in solidarity is a real necessity. Dressing up the city for a party is not forgetting the period we are living, but it is trying to instill hope for a more serene future, to bring serenity and joy in a year made of great worries.

And also in Mestre this message is spread with light. The main attraction is certainly Piazza Ferretto: the city's living room has been illuminated by a gigantic traditional tree 17 metres high, with such a wide base that it has been possible to create a tunnel of flashing lights inside it that allows people to pass from one side to the other. It will certainly delight the children and the most inveterate instagrammers looking for the perfect shot to post.

The rest of the square will be embellished with suspended lights that will create a real starry sky that will illuminate even the darkest nights. From here, the illuminations will extend along the main streets of the center, up to the most peripheral ones, for a total of about 20 kilometers of streets to dress up the city and give back to the citizens a warm Christmas spirit. 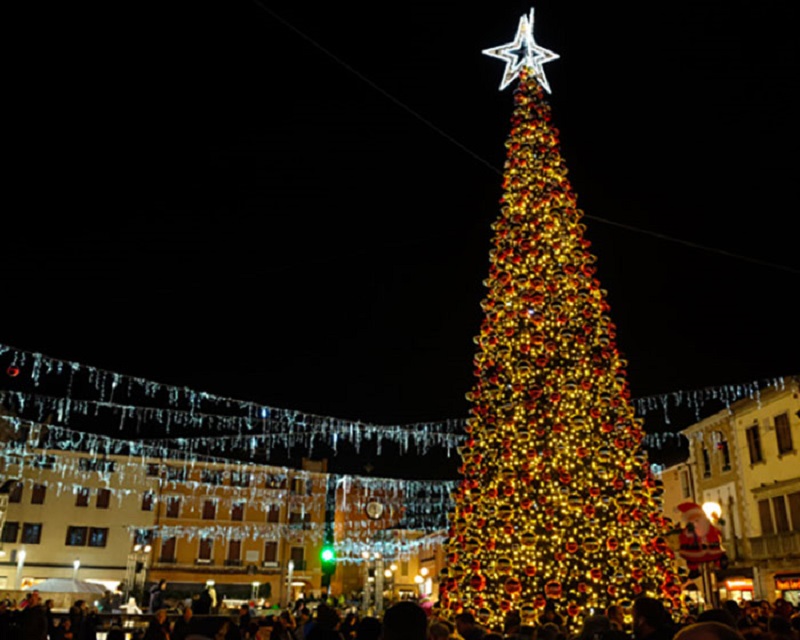 Christmas in Padua: a city of stars that doesn't turn off the magic

In Padua the magic of Christmas is not extinguished!

The city, respecting the anti-contagious regulations and the safety of citizens and visitors, has turned on its illuminations, which have been accompanied by video projections that pay homage to two great characters who really know about stars: Giotto and Galileo Galilei.

Thus, the facades of some buildings of the historical center will be transformed into digital art canvases, where animations inspired by the two great "stars" who made the history of the city will be projected. A poetic and fascinating journey that combines painting and science, feeling and reason, and that will transform real buildings into enchanting virtual animations. The buildings involved in this videomapping will be Palazzo Moroni, Palazzo della Ragione side Piazza delle Erbe, Palazzo del Capitanio, Loggia della Gran Guardia on Piazza della Signoria, Palazzo del Monte di Pietà on Piazza Duomo, Palazzo dell'Inps on Piazza Insurrezione.

And until January 6, the city will also be the protagonist of the exhibition Presepiando, a tradition of recent years: the stores and stores in the streets of the center will host a selection of cribs from the collection of Elena Turci. About 200 examples from the early twentieth century to the present day from every corner of the world, which tell how people see the nativity. Very different materials are used, such as glass and crystal, but also terracotta and bamboo for those coming from the poorest parts of the planet, in contrast to the precious and opulent ones in gold and mother-of-pearl. A journey into the deepest meaning of Christmas: the birth of Christ. The enchanted Christmas in Treviso

Christmas 2020 in Treviso will be enchanted, to transport citizens and visitors in the muffled atmosphere that this period deserves.

The historic center will be enriched by 5 monumental trees that have been lit simultaneously as a surprise: a way to avoid unsafe crowds, but also to give an unexpected effect that brings joy in its improvisation.

The heart of this Christmas 2020 will be the Enchanted Loggia, symbol of Treviso transformed into an Italian garden, is lit by a thousand warm and golden lights, where maxi screens will be placed, as in other areas of the city, where performances by artists from Treviso will be staged and messages of greetings from the most representative characters of the "trevigianità". Confirmed the Via dei Presepi, that from December 26th until January 10th 2021 in the main churches of the city will expose incredible and monumental nativity scenes. We have said it a thousand times and we have heard it as many times: it will be a different Christmas. And so what we can do is transform this unusually different holiday into a Christmas as normal as possible, as if everything were "as before", because despite everything it is Christmas.

And a Merry Christmas to all it may be!