The Historical Regatta 2020: the best of rowing in the Veneto region

There is an appointment that every year, on the first Sunday of September, the Venetians await with great enthusiasm: the Historical Regatta.

An event with a centuries-old tradition, capable of crossing time and history. An event that was as passionate at the time of the Serenissima as it still honours the Venetians today.

Also this year, despite the Covid emergency, the Historical Regatta will be held as usual along the Grand Canal. Everything is ready for Sunday, September 6 to offer citizens and tourists a moment of fun and entertainment, while still fully respecting the rules against contagion.

The Regatta between history and tradition

The history of the Historical Regatta has its roots in a very distant time. Probably the origins are older than the first testimonies known to us, dating back to the thirteenth century and linking it to the Feast of the Maries.

The vocation to the sea of Venice in fact has a long history and it is likely that the first regattas were born for the simple need to train the crews.

The first visual representations of the regatta arrived only in 1500 thanks to the Plan of Venice by Jacopo Dé Barberi who placed the inscription "regata" under a group of small boats. From that moment on many are the artists who paint it and among them also Canaletto who helps us to discover in his precise and meticulous way the atmosphere lived in his time during this event.

The Historical Regatta did not take place constantly over time, but several times and for a long time it did not even have a regular cadence. In every period in which it was organized, however, to animate it has always been a playful spirit that was well intertwined with the competitive one, between religious and secular celebrations.

In the nineteenth century, during the period of Austrian domination, the Regatta once again involved the Venetians. It is in fact at that time that an annual cadence is decided for this event and special economic resources are thought to be committed for the organization of this event.

The Historical Regatta as we know it today originated at the end of the nineteenth century, in 1899 to be exact, when thanks to the Biennale d'Arte not only the regatta was defined with the adjective "historical", but also the organizational guidelines were decided.

More than a real race, the regatta that every year takes place along the Grand Canal strictly on the first Sunday of September, becomes a celebratory event with a historical procession to precede the boat races. A parade of dozens of boats typical of the sixteenth century sailed along the Grand Canal carrying the Doge, the Doge's wife and the highest offices of the Venetian Magistracy: a spectacular re-enactment of the welcome procession that the Republic of the Serenissima reserved in 1489 to Caterina Corner , Queen of Cyprus, who renounced her throne and allowed the annexation of the island to Venice, and a meticulous reconstruction of an age now far away that also passes through the customs and customs typical of the Serenissima era.

The Historical Regatta represents for the Venetians an event similar in some ways to the Palio of Siena. In the lagoon capital to face each other are not districts but the sestieri ,the districts in which the city is divided.

An event rich in color and folklore that represents one of the most beautiful moments of the Venetian tradition, too often considered empty of its truest essence because of mass tourism. A moment, like the Feast of the Redentore in July and the Madonna della Salute in November, which instead unites the city more than ever with the same spirit of hospitality that has always characterized Venice.

Not to be missed as well as the most important date in the calendar of Venetian Rowing races, the Historical Regatta fascinates every year for its spectacular character.

How does it take place?

The Historical Regatta includes four competitions divided by age category and type of boat. Among all the most exciting and most famous is certainly the regatta of champions on the gondolini. Their race along the Grand Canal has as its finishing line the "machina", that is the large floating stage that is placed in front of the main building of Ca'Foscari.

Here is the program planned for this year, even if the official website of the event invites to stay updated through the official web channels for any communication in relation to the Covid-19 emergency.

It begins with the Blessing of the gondolini at 18.00 in the Campo della Salute. On this occasion the crews are presented, the bands and the boats are blessed. At 5 p.m. the meeting point is in Erbaria in Rialto and then at 5.30 p.m. the start of the water parade along the Grand Canal to reach the church of Madonna della Salute.

The big day, however, is Sunday. Here are in detail the moments of this day, starting at 16.00:

- Maciarele Junior (up to 12 years). Route: from San Stae to Ca' Foscari

- The Regatta of the very young on two oars pupparini at 4:50 p.m., with the route Bacino San Marco, Grand Canal, round the pole at Ca' Farsetti and arrival at Ca' Foscari.

- The Regata delle caorline with six oars at 5:10 p.m., from St. Mark's Basin, passing through the Grand Canal, Rialto (turn of the paleto at San Marcuola), return along the Grand Canal and arrival at Ca' Foscari.

- The University Regatta. After the caorline and the gondolini is the moment of the international rowing challenge of the universities. The crews of the Ca' Foscari University, of the Iuav of Venice and of the other participating universities compete on galleons with eight oars. The route of this race includes a journey from Rialto to Ca' Foscari.

- The Women's Regatta su mascarete with two oars at 5:40 p.m., which cover St. Mark's Basin, the Grand Canal, the Rialto (turn of the paleto at San Marcuola), then the return along the Grand Canal until the arrival at Ca' Foscari.

- The Regata dei gondolini with two oars 6:10 p.m., with identical route and finish line also in this race at Ca' Foscari. 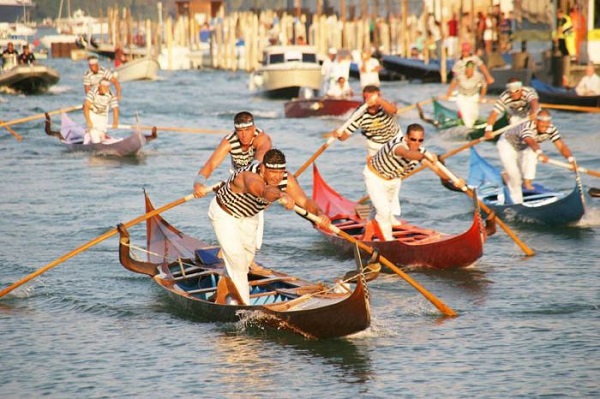 The beautiful images of a Historical Regatta (click here)❯ 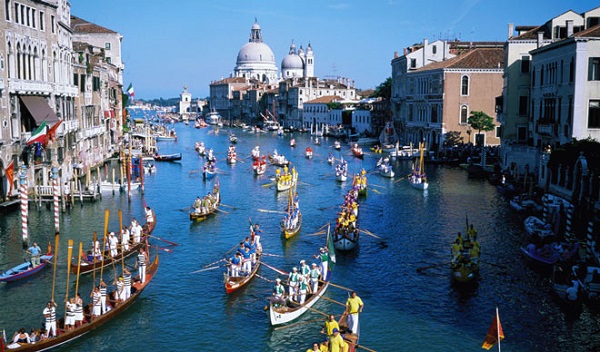 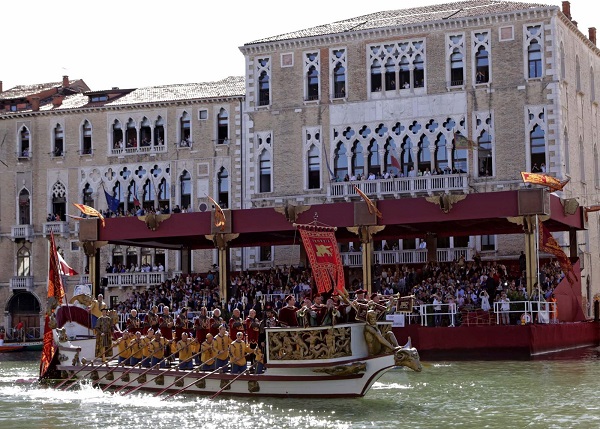 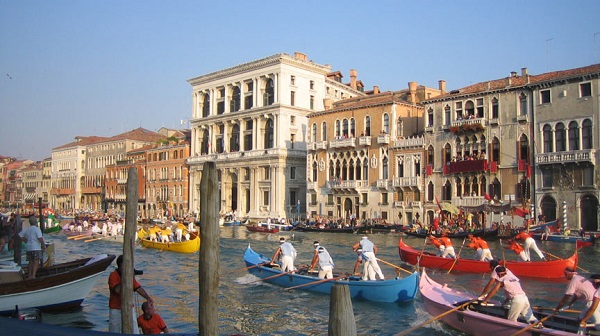 All the information related to the 2020 edition of the Historical Regatta can be found on the website https://www.regatastoricavenezia.it/. Here also the updates of any news, useful to plan your Venetian day.