The feast of the Maries, the tradition that united people and nobility today linked to the Carnival

The feast of the Maries, today linked to the Carnival celebrations, is one of the oldest traditions that Venice remembers and renews every year. One of the few public events, hovering between the sacred and the profane, which saw the people with a leading role, and not only as a simple figurant.

But the evolution of the festival also manifested a sort of inter-classist spirit on the part of the Serenissima, while remaining deeply and firmly oligarchic.

The origins of the party: from lucky maidens to 'Marie de tola' 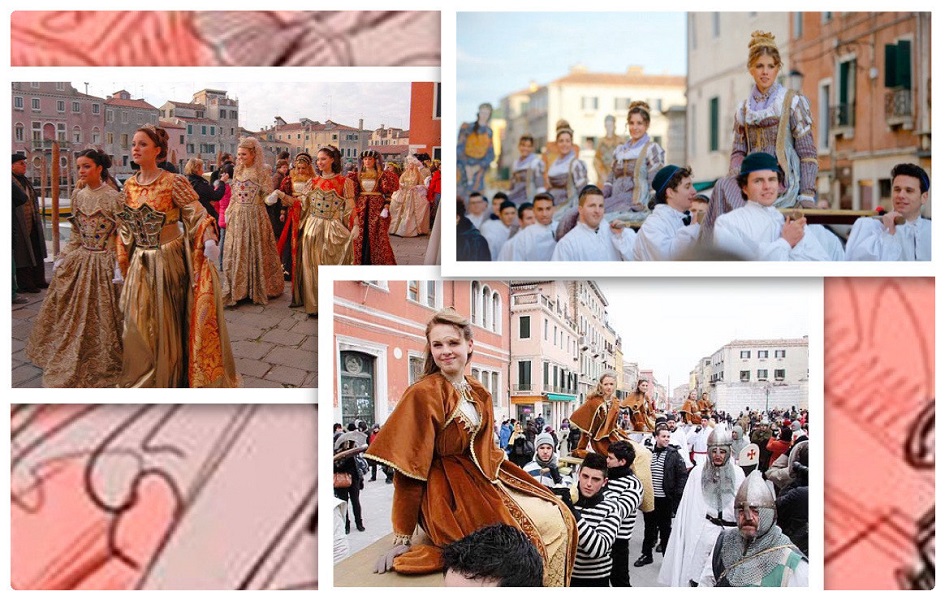 The tradition of the Maries seems to date back as far as the 9th century, when on the occasion of the Purification of Mary, usually celebrated on February 2, 12 young girls and their respective spouses were blessed in the Church of San Pietro di Castello, couples who would be married within the year. The brides were adorned with precious dresses and opulent jewels donated by the noble families of the city: the jewels were kept in small wooden containers, called arches, made for the occasion and skilfully carved by expert craftsmen. The nobles also participated with lavish donations, in order to build the wedding dowry of the girls, always belonging to the people and therefore without great means.

The ceremony was very heartfelt, not only because of its religious value, but because it aimed to increase the number of weddings in a city not very populated, but above all to create a bond not only apparent between the less wealthy classes of society and the high nobility.

The event then highlighted the female figure, very often relegated to a lower level, exalting her role also as wife and mother, as if the fate of society depended on them. And again, it made the protagonist of such a heartfelt celebration the very people who enjoyed few spaces and rare amusements: a sort of placebo but for which the population itself had its good reward, while still keeping alive the feeling of recognition towards the rich families of the Republic.

Smart Venetians! All of them!

Things went well until 946, when during the ceremony in Castello, a group of Istrian pirates kidnapped the girls, attracted by the jewels kept in the arches. The event shocked all the Venetians but did not prevent them from taking justice: thanks to the little cunning of the pirates who stayed in the lagoon to share the loot instead of fleeing far away, an expedition of Venetians immediately set off in pursuit of the evildoers.

Intercepted in Caorle, the Istrians were killed and the girls with the precious loot were returned to their spouses and families. The liberators were welcomed with enthusiasm and gratitude, and the Doge, Pietro III Candiano, asked them how they wanted to be rewarded for their heroic deed. They, who belonged to the Parish of Santa Maria Formosa, the only one dedicated to the cult of Mary, asked that the valiant gesture be remembered every year with a solemn visit to the Virgin. The Doge accepted the request and the appointment was introduced in the calendar of his official engagements, and the Church became the place of the popular event.

From that terrible episode it was established, moreover, that instead of celebrating the marriage of the couples, the feast became the occasion of a concrete help for the poor girls: 12 girls, chosen by a fortuitous draw, were entrusted to as many noble families who would provide for them and their dowry, leading them to the wedding. 12 very lucky girls then!

The feast thus established always had its beginning in San Pietro di Castello, where the Bishop gave blessing to the girls, and then continued with the procession to St. Mark's for the ceremony in the presence of the Doge inside the Basilica. And again, it continued with a banquet at the Doge's Palace and a sumptuous parade on the Bucintoro along the Grand Canal among wings of festive crowds that crowded the banks and overlooked the palaces, ending with a tribute to the Virgin to Santa Maria Formosa.

Seeing the Maries parade was considered a good omen and this is why the feast enlivened everyone's hearts, also attracting the Venetians from the hinterland and numerous foreigners from faraway places, so much so that exceptional safety measures had to be taken.

With the passing of time, however, the feast degenerated, both because the draw created bad moods and protests, and because the nobles no longer wanted to shoulder that burden. But also because the girls who were parading were often the object of the men who came to see them.

So, in 1343 the girls were replaced by decorated and painted wooden silhouettes, which were given the name of "Maria de tola" (wooden woman): the expression soon passed to indicate a woman without feminine forms, lacking in emotions and imperceptible. Even from here it seems that the term "puppet" would also derive, to indicate a puppet without cognitive abilities.

However, these silhouettes immediately became a target for the Venetians who showed their disappointment at the replacement of the girls and the abolition of economic aid by the noble families, throwing stones, vegetables and objects of various kinds at them. Legislation was even issued in order to prevent such abject behaviour, which sanctioned with jail all those who were guilty of throwing and ignoble acts during the demonstration.

However, the situation became excessively dangerous and after only 30 years the festival was abolished.

The feast of the Maries today: the link with the Carnival 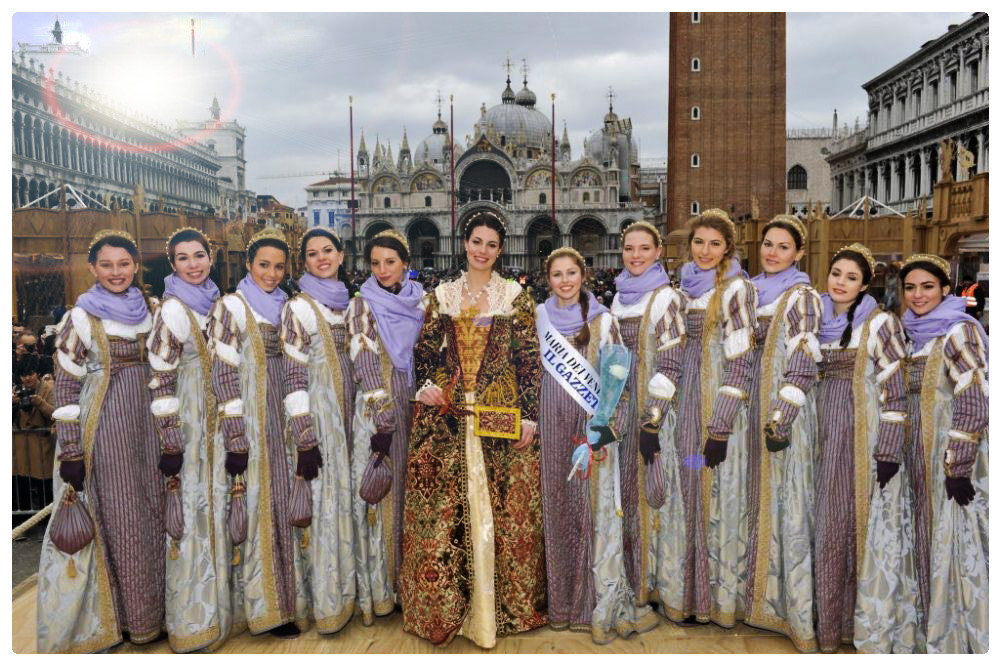 After seven centuries of absence, the reintroduction of the feast of the Maries is due to Bruno Tosi, well-known journalist and cultural operator, who has linked, with great intuition, the ancient tradition to the Carnival celebrations. The famous pen, establishing the competition of the Maries, has relaunched the re-enactment of the kidnapping and release of girls in 946. So every year the Marie's parade is one of the first and long-awaited events of the Carnival: 12 Venetian girls aged between 18 and 28 years parade from San Pietro di Castello along the elegant Riva degli Schiavoni, until they reach the Doge in St. Mark's Square. Surrounded by about 300 participants, they bring to light and renew every year the secular popular event, attracting the interest of citizens and tourists, and giving the opportunity to admire the costumes of the ancient Venetian tradition.

A series of events, poised between historical evocations and worldly events, will allow a jury to get to know the candidates for the competition. On Shrove Tuesday the most beautiful Mary will be elected and presented in St. Mark's Square to the people: the following year she will dress the exclusive clothes of the angel who, flying from the Bell Tower, will mark the beginning of Carnival.

Maidens, Marys and angels... in Venice at Carnival everything is worth it!