Venice "sconta": getting lost among the campielli and the most hidden courts

There is no better way to discover Venice than to get lost among its courts and its most hidden campielli. So put away your maps and let your intuition guide you. It will lead you to very special places.

In fact, there is a Venice that is off the most popular tourist itineraries, made up of narrow streets, cloths laid out and the scents of tradition. A living and true Venice that offers incomparable views and a very special point of view of the city.

A Venice that we call "sconta", to use a dialectal term that means hidden, but no less beautiful or precious.

Ready to search a treasure rich in history, art and legends?

Between tradition and legend 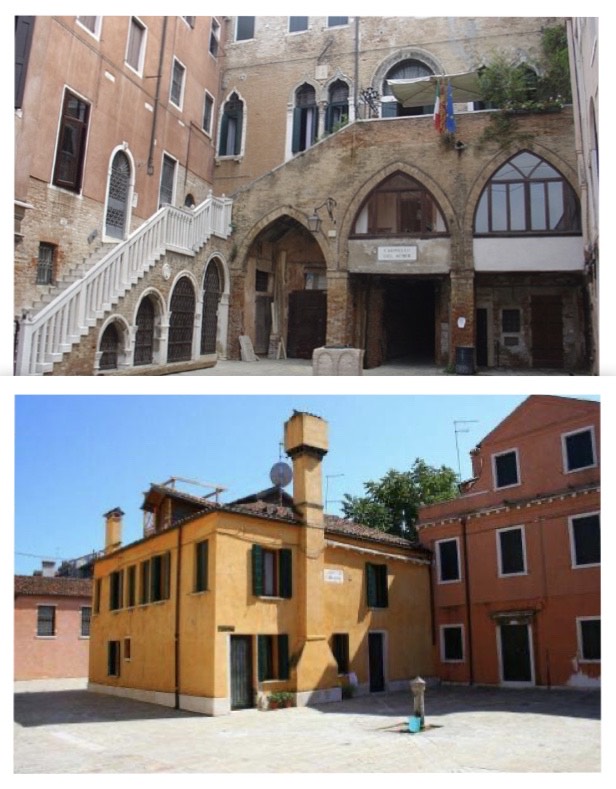 We begin our tour with the Campiello de le Becarie in San Giobbe, in the Sestiere of Cannaregio: a university area today, thanks to the presence of several departments of Ca'Foscari, but a popular area with an interesting history in the past.

We must go back in time in order to understand the origin of the name of this campiello, that is at the end of a calle of the same name. Let's start from its name: Becarie, that is butcher's shops: in Venetian dialect the becher is in fact the butcher. In this area it was possible to find, since the second half of 1400, spaces used for the slaughter of meat. In Venice, if you notice, most of the calli are dedicated to the typical and traditional professions of the city, while the campi are named after the Saints. An interesting and simple way, that we want to suggest you to get to know the Venice of the past, is to raise your eyes from time to time and read the names reported by the "nizioleti".

The calle and the campiello delle Becarie, however, were not the only area in Venice used for slaughter. The most important slaughterhouses were in fact located in San Marco, in the small square overlooking the basin and in Rialto. But they were not the only areas where this activity took place and you can easily discover it, simply walking around the city, where the presence of the Becheri was almost in every Sestiere. In fact you can come across places like the Calle del Becher in S.Felice, in the Strada Nova area of Cannaregio, or the Calle dei Vedei (Calle of the calves), not far from the Jewish Ghetto.

But let's go back to San Giobbe: we know that in the second decade of the 1700s there were two large becarie in that area, with warehouses where meat was slaughtered. In the nineteenth century, due to the need to group the slaughtering activities in a single area of the city, the one in San Giobbe was designated for this and expanded. Today it is a splendid campiello, with the houses that overlook it and create a small interesting corner in Venice.

We move to the San Polo district, less than 5 minutes from Campo Santi Apostoli and not far from Rialto, there is the Campiello del Remer, with a splendid view of the Grand Canal. I will not tell you the exact position because I would like you to get lost to find it, just as I said at the beginning!

Although it is probably one of the most famous campielli in Venice and therefore among the most visited, it is located out of the continuous flow of tourists and so in a more popular area.

As for the becarie, also the remer identifies a job: the oar maker, a profession that in a city of water was fundamental, as well as very widespread in the past.

Characteristic for the beautiful 15th century buildings that overlook it, Campiello del Remer is also known for its ghosts. Yes, this little corner of Venice is linked to a legend that originates from a terrible story: in 1598 a young woman was beheaded by her insanely jealous husband. It was Elena, the Doge Marino Grimani's niece. He ordered the murderer to go to Rome with his wife's head to ask the Pope for the punishment he should have suffered. The man refused, however, and while he was about to be taken to prison, in the grip of remorse he decided to throw himself into the Grand Canal with Elena's head.

Since then, it is said that when the wind blows from the north, it happens to see, right in front of the Campiello del Remer, the body of the man who resurfaces from the water with Elena's head in his hands.

Between literature and history If you don't like the thrill, but still the mystery fascinates you, here is Calle Botera, in the Castello district, the most popular area of Venice today, as well as the Giudecca. In the paste they used to make barrels here, but this is not the real reason why we want to tell you about it.

Lovers of Corto Maltese have certainly already heard about this place. However, if you don't remember this name, don't worry. Hugo Pratt, the father of the imaginary figure of Corto, had renamed it in another way: Corte sconta called Arcana.

What peculiarity had the famous cartoonist caught there?

In his vision, Hugo Pratt described in this place the presence of a magic door that once crossed it allowed to reach imaginary, incredible places. This is an understandeable fantasy only if you are lucky enough to find yourself in this place. Here you can find peace, serenity and a halo of unreality, uncommon in a city so crowded.

A small jewel characterized by the presence of architectural elements of the 12th century that blend together in a harmonious way. Beyond the magic door, two other elements characterize this enchanted place: the sundial placed on the wall in front of the entrance and a well preserved vera da pozzo in the center.

Here once stood Palazzo Contarini della Zoggia. Today this building no longer exists, but its memory remains thanks to the round arch now walled, typical of the 13th century style.

It is not easy to find this court, but we can tell you that it stands not far from Campo Santi Giovanni e Paolo.

Today Corte Botera, due to the frequent visits of curious people, has become private and therefore closed by a gate. Probably, however, you can find someone who allows you to enter to breathe for a few moments the magic of this place.

Not far from Corte Botera there is Corte seconda del Milion. The name will immediately remind everyone the famous "Il Milione", the book in which are narrated Marco Polo's travels to the East.

As you can guess, if there is a second court it must also exist a first one.

In fact there is, but it is small and uninteresting compared to the second one, with larger dimensions and connected to it by a sottoportego. Here you can immerse yourself in the atmosphere in which Marco Polo lived because the architectural elements in the courtyard date back to the same period in which the Venetian traveller lived, between the 11th and 12th centuries.

It's really interesting the typical vera da pozzo in the center of the campo, but certainly also the gothic polifera and other architectural elements. Those who love the events of the famous Venetian traveller can not miss to continue, not far from here, to see the place where Marco Polo's house stood. You will only find a plaque that reminds you of him because in its place stands since 1678 the Malibran Theatre, originally known as Teatro San Grisostomo. It was built by the Grimani Family and was devoted exclusively to music. With the change of ownership, it also changed genre, preferring entertainment. The name Malibran is due to the gratitude of the owners to the singer Felicita Garcia Malibran, strongly linked to the activity of the theatre.

Near the Corte del Milion there is Corte Morosina, which can be reached by passing through a marble arch in Arabic style, dating back to the 12th or 14th century. On this arch there are a helmet and a shield that bring back to memory the adventures of knights and love duels. In fact, the atmosphere that dominates this small corte is medieval, with its terracotta floor, a splendid vera da pozzo and an external staircase that leads to private homes, which once housed the Morosini family, one of the most powerful in the Republic, having had four doges, three dogaresse and two queens!

Small spaces that enchant and remind us how the most beautiful Venice is in the most hidden corners that have experienced the events of everyday life of the Serenissima. Today many spaces are unfortunately closed to the public, due to the lack of education and respect of many. I advise you to look for them, to get lost in these wonderful hidden corners.