When we visit a new place, near or far, besides admiring its artistic and natural beauty, we are guided by an inevitable curiosity towards its cuisine. Have you ever paid attention to it? In fact, this desire to know new flavors, colors and smells has a very deep implication because food is not only a physical necessity, but, especially in our society, an element of cultural identification.

As Massimo Montanari says, "Cooking is a human activity par excellence, it is the gesture that transforms the product of nature into something profoundly different: the chemical modifications induced by cooking allow you to bring a food to the mouth, if not totally artificial, certainly built".

Knowing the local food, the combinations of flavors, the cooking methods we approach the identity of a people, establishing a more intimate relationship with it. Not only that! Through the knowledge of the ingredients of the dishes it is possible to trace back to its history, economy, religion and migrations that have contributed to its current conformation. For example, in the Middle Ages food culture had a very important evolution: the introduction of spices. The latter had a dual function of food preservation and self-assertion of the wealthier social classes, since they were particularly expensive as they came from remote areas of the Earth. Therefore, cooking a dish with spices, wanted to be a way to affirm a particular identity. Obviously, in the history of cooking there are many examples of "poorer" dishes, which therefore go to connote the most popular social classes.

Could a cosmopolitan city like Venice ever be an exception? Certainly not!

But what do the dishes we can taste in Venice tell us? Come with me, I will show you the kosher cuisine of the Jewish Ghetto!! The birth of the ebaric culture in Venice The history of the presence of a Jewish community in Venice, at least in its most ancient phase, is still shrouded in shadows. Popular tradition has it that the first settlement in the city was on the island of Spinalonga which, following the settlement of the community, would have taken the name of Giudecca. What is certain is that Jewish merchants traded with Venice as early as the 10th century.

In 1385, the Senate sanctioned with the first conduct the actual presence of the community to which were prescribed precise rules of conduct and as regards the activities to be carried out in the lagoon. Later, in 1516, it was established that the Jewish community of German origin was settled in a specific area of the city, in the Sestiere of Cannaregio, where there was a foundry. The Jews had to wear distinctive symbols to be always recognized and differentiated from the rest of the citizens, and they could move freely in the city only in a part of the day: in fact it was established that the two access bridges were open in the morning and closed during the night and that they were manned to ensure that the law was respected. Thus was born the first Ghetto in history.

It seems, among other things, that the term ghetto is derived from the term getàr, or merge,  in clear reference to the foundry first present in the area.

Over the centuries, the German Ashkenazite community was joined by communities of Levantine and Ponentine origins that brought with them very different habits, for example the first one, of oriental style both in terms of clothing and religious and dietary habits. The second, brought with it habits closer to the Mediterranean culture.

So, over the centuries until today, Venice has hosted heterogeneous cultures, although with a common matrix, the religious one.

What was born from this coexistence and its inevitable cultural exchanges with the native population is a Jewish-Venetian culture that finds its example in the Kosher cuisine. 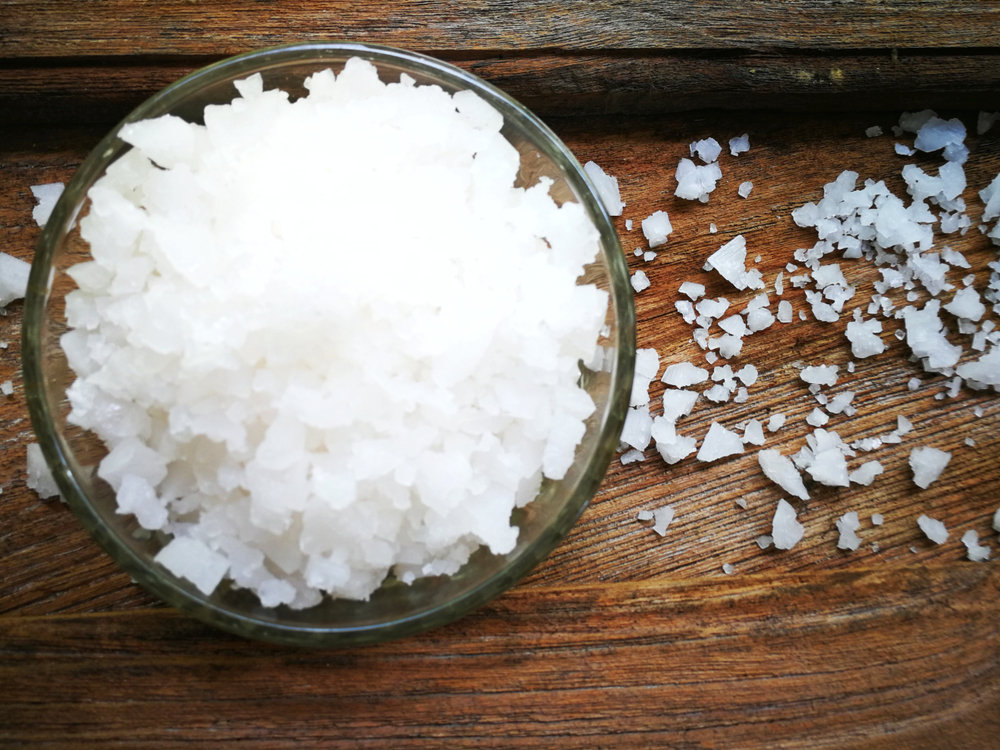 What is meant by Kosher kitchen?

Instinctively, we would be led to think that it is traditional Jewish cuisine, but it is not!

The term Kosher means "suitable" "suitable". There is no single Jewish cuisine, but there are gastronomic traditions that respect precise rules, enclosed in the Torah, pivotal reference of the Jewish religion, which indicate which foods can be eaten, how they are prepared, and the possible combinations.

Thus, we can include in this type of gastronomic tradition all those preparations that involve the use of animals considered "pure", that is all those animals with foolish hoof and ruminants. As far as poultry meat is concerned, chicken, turkey, goose and duck are allowed. It is also allowed to eat fish as long as they have bones and fins, while crustaceans and molluscs are excluded.

Slaughtering must also be carried out according to precise criteria that guarantee the kosherut (suitability) of the meat,as the elimination of as much blood as possible.  This procedure is carried out with the help of a particular type of salt, called kosher salt, which has particular characteristics that make it suitable for the preparation of dishes related to the Jewish tradition: it is a non-refined salt that does not contain iodine, additives and has larger grains that adhere better to the meat, improving its drainage.

It is also not possible to combine milk-based foods with meat, and utensils must be separated so as not to contaminate the food, and raw materials must not contain insects.

In total 7 essential rules for the preparation and consumption of meals.

In the Jewish religion, food plays an extremely important role because it is one of the moments in which human behavior must be distinguished from that of animals. The dinner is seen as a means of atonement.

Every meal must begin with the consumption of bread and salt, which symbolize respectively the mercy of God and the rigidity of justice.

These are the guidelines that must be followed in order to obtain the kosher kitchen certification.

Kosher cuisine: birth and evolution in the Lagoon 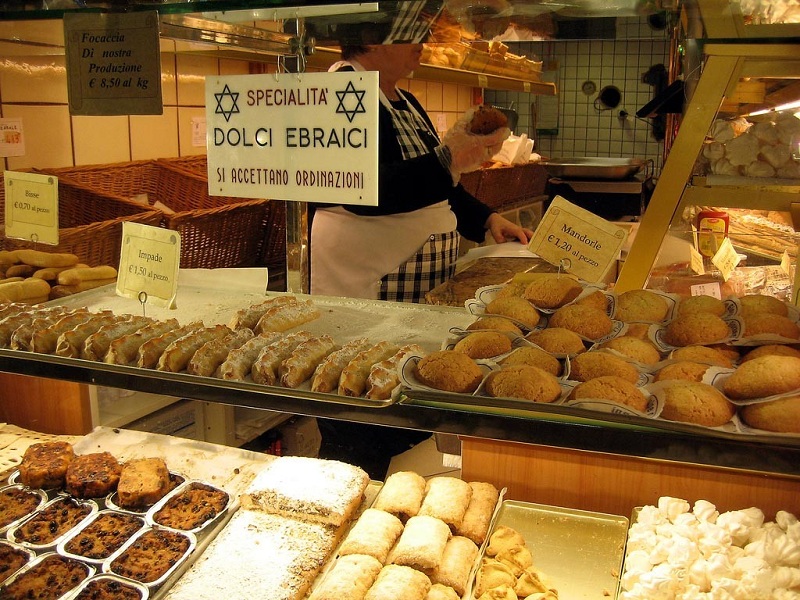 As we could see, the Jewish communities came from very different geographical areas, but here in Venice they all found themselves living together in one area, the Ghetto. This imprisonment, that lasted until 1797, obviously not very happy from a human rights point of view, was not able to stop an osmotic process between the Ghetto and the rest of the City, giving rise to an interesting cultural exchange between the Venetians and the Jews, contributing to enrich the characteristics of the Jewish-lagunate cuisine, but also of the traditional local cuisine.

This was favored by the need of the citizens of Venice to go to the Ghetto to pawn objects, to go to the synagogues in it and to make small purchases. In fact, unlike other Italian cities, Venice and its inhabitants were never hostile to foreign communities, showing a remarkable openness towards different customs, especially culinary ones! Thus, for the local population consuming kosher food represented an exotic experience, a way to travel while staying in the city. Those who approached these new flavors appreciated the care with which these dishes were prepared and the particular balance of spices, which were not yet widespread at the time.

As time went by, the two kitchens ended up influencing each other, giving rise to some of the dishes that still characterize Venice today. Among these we find the famous sardines in saor, a dish symbol of the Feast of the Redeemer, prepared with the combination of raisins and pine nuts, probably introduced by the Ponentini of the Iberian Peninsula, who used it to cook sweet and sour cod. Of ashkenazita derivation, instead, is the typical fugazza cole gribole, a focaccia prepared with pieces of fried goose skin. Of Levantine derivation are all those dishes where spices are the pivotal element, together with dried fruit.

The zalo rice (yellow rise), fried in goose fat and flavoured with saffron is the result of the meeting of the typically oriental taste for spices and the Ashkenazi tradition.

The melazane soto azeo (eggplants in vinegar), very present on the tables of Venetians, also have their origins in Jewish cuisine as do the famous bigoli in salsa, a special type of spaghetti dressed with a sauce of onions and anchovies.

Many are the sweets of Jewish origin that can still be enjoyed here in Venice!

Among those related to Pèsach, the Jewish Easter, there are the àpere, soft round shaped sweets made with flour, eggs and sugar.

Very popular dessert throughout the city are the bìse, from the Venetian bissa, which recalls the typical "S" shape of these lemon flavoured cookies. Still of the Easter period are the anezìni, aniseed cookies and zuccherini (sugars), dry cakes sprinkled with sugar that have a flat donut shape.

One of the legacies that the Sephardic Jewish community has left to the City of Venice in the confectionery field is certainly the wide use of almonds. A famous example of this influence are the impàde, elongated shaped cookies filled with a mixture of eggs, sugar and almonds.

Finally, among the typical sweets of the feast of Purìm, the feast of the Fates, commonly defined as the Jewish Carnival, are the recie of Aman. These sweets, whose dough in Venice is the same used for traditional Carnival pastry, are fried and stuffed with different ingredients such as jam, almonds, poppy seeds, raisins, cinnamon, plums or quince. Their history is linked to the liberation of the Jewish people from Amman by Queen Esther.

In short, we can say that a substantial part of the gastronomic culture of Venice is closely linked to the presence of the Jewish communities, also confirming through the cuisine the strongly cosmopolitan character of the beautiful lagoon city.

Still today, going to the Sestiere Cannaregio, crossing the entrance of the Ghetto, of which today we still find the hinges of the gates that were closed during the night, in addition to visiting the splendid Synagogues and the Jewish Museum, it will be possible to taste delicious dishes prepared in the various restaurants in the area. 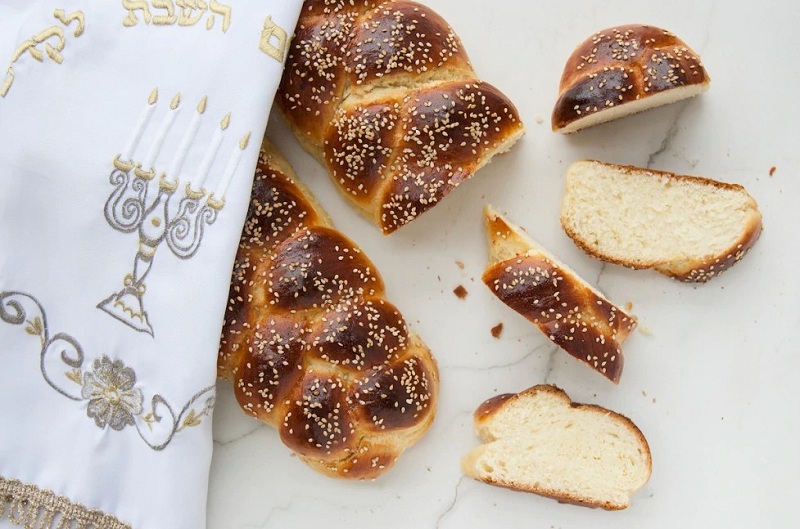 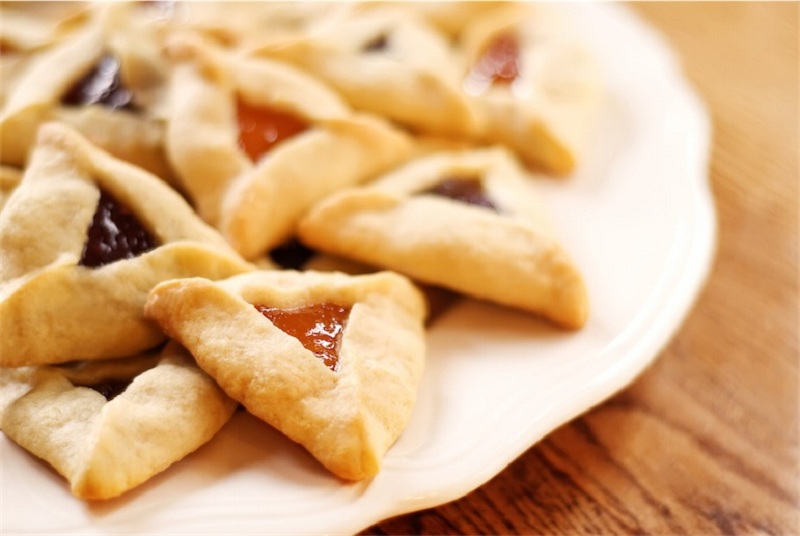