Venice and its universal art: an absolute and timeless value

Venice, a place where art, creativity, craftsmanship and design have always managed to find fertile ground, in every historical period, through new forms, generation after generation. In a city like this, we can take the freedom to upset the linearity of time and make comparisons between artists even from different eras.

What could happen if we mixed all this abundance of knowledge related to the arts? Would there be confusion or concordance?

Let us allow ourselves to be carried away by fantasy on a timeless journey where we question the conventional linearity of the history of the arts: so here it is, the solemn embrace of artists coming from different times but united by the great spirit of the very peaceful city of Venice.

The expolosion of gesture and colour: Titian and Emilio Vedova 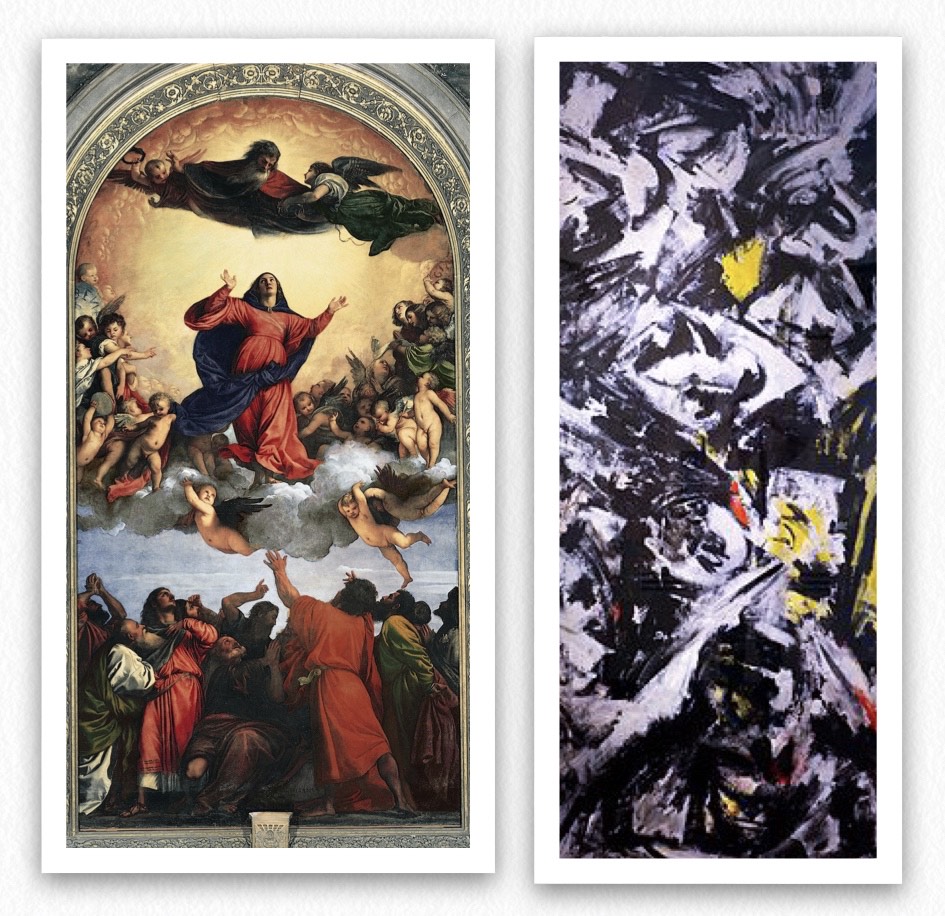 We're off! Even mixing time and centuries together, some of the features that have defined the art of Venice over the centuries remain incredibly unchanged. Colour, for example, has taken on a prominent position, overwhelming over drawing, both in high public commissions and in the most personal forms of expression, so much so that we can identify in Venice "the Italian school of colour". Now let us examine two artists from different eras and ideologies and note how this exaltation of colour is always present today as it was yesterday.

Tiziano Vecellio, celebrated simply as Titian (Pieve di Cadore 1488 - Venice 1576) and Emilio Vedova (Venice 1919 - Venice 2006) two great masters of painting who differ in personal history, cultural affiliation and society, but who at the same time find in the power of colour their most important analogy. The mark left by the brush of both of them is impetuous, expressive, material. The Renaissance master, Vecellio,used to divide his work into several phases: in the first he modelled the shapes, the masses of the bodies establishing proportions and distances in a rapid and dynamic way; in the second, even after several months, he defined the figures and illuminated them with the brilliant light typical of his painting.

In Vedova's painting, on the other hand, the definition of something tangible, from the figurative point of view, will never happen, but here too there are nervous and infinite overlaps of colour. Vedova's work is the disruptive gesture, all his strength lies there and this is in common with part of Titian's more mature work, when he too defined very little but on the contrary left his paintings blurred and uncertain, using his fingers, and therefore the gesture of the body, together or instead of the brush.

The concreteness of light: Canaletto and Carlo Scarpa Generations and generations of Venetian artists have managed to combine the arts so alive and diverse around common themes that over time have given immense pleasure to the eyes and soul. Light is a theme tackled many times in the art world and many are the artists who have dwelt on the characteristics of light in their works. Two authors who fully address this important theme are certainly Giovanni Antonio Canal known as Canaletto (Venice 1697 - Venice 1768) and Carlo Scarpa (Venice 1906 - Sendai 1978) painter and engraver the former, architect and designer the latter, different for type of artistic work, but similar in their harmonious choices and in the use of a rigorous scientific method applied to the visual aspects of their art. Canaletto captures in his painting the light and the images of the views of Venice, in a way similar to a modern photographer, scrupulously studying the different atmospheres and the various lighting effects that transform this nature into a work. It is true that in order to admire what surrounds us we need light, as the architect Carlo Scarpa knows very well. During his long career he has designed public and private buildings, he has been involved in restoration and museum layouts, also following principles of formal and lighting balance. Canaletto captures the harmony that exists in the urban planning of the city and paints following the perspective in a mathematical way, sometimes using the so-called darkroom, a device composed of a box that allows you to project an image inside thanks to a hole that lets in the light, a general principle of modern cameras.

In Scarpa's works natural light is the real protagonist, it enters the architecture and whether it is a shop or a museum it is always able to highlight what is exposed inside and not only, the harmony between structure and work, where inside and outside become an absolute value, a poetic reflection able to characterize all his work.

The strength of experimentation: from the great artists of the 15th century to the Venice Biennale 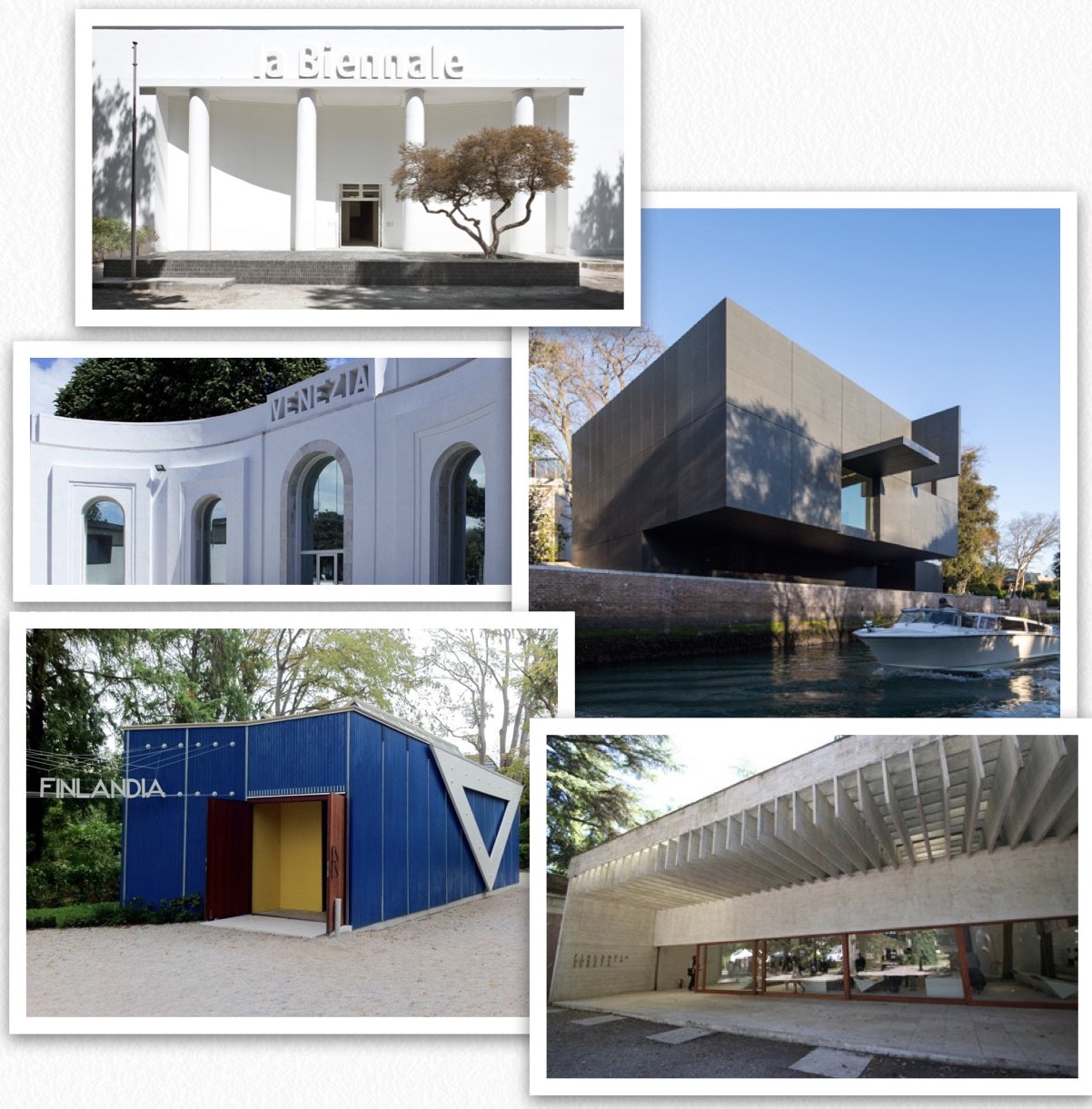 Creativity in Venice has always had a value of knowledge, and over time Venetian artists have managed to leave their mark on history, and this is due to their great strength in experimentation. The city has been generous and open with them on several occasions, capable of accepting stimuli from the outside and transforming them into knowledge and then into consciousness. A concrete example can be that of the Venice Biennale which since 1895 has welcomed artists from all over the world, with an emphasis on innovation and artistic research. The idea, then unique on the international scene, belonged to a group of intellectuals close to the mayor of the time Riccardo Selvatico, also known as a poet and playwright. The establishment of such an international exhibition had the aim of boosting productivity and the market, it also allowed the creation of the historic National Pavilions, and the historicisation of great masters such as Klimt, Renoir, Courbet, Braque, Ernst and entire artistic currents such as Pop Art and Action Painting.

Innovation is therefore an attribute that is well suited to art in Venice, not only with regard to the contemporary Kermesse par excellence.

Think, for example, of the concept of the workshop completely revolutionized thanks to the Bellini family, which will see in the figure of Giovanni Bellini (Venice 1433 - Venice 1516) a man capable of making art by developing a model similar to a modern business reality, with collaborators, helpers, garments and clients: a work concept that will soon be exported even outside the lagoon. Think of the experience of Tonalism by Giorgione and Titian himself, the theatrical use of perspective in Tintoretto, who in this way succeeded in anticipating the masters of Baroque painting, or painters such as Sebastiano del Piombo or Jacopo Bassano who were able to link these experiences to other cities such as Rome, thus contributing to the construction of a great and coherent Italian artistic season.

It is really important therefore to move away from the idea that history is only a chronological and linear account of events concerning human beauty and creativity. Art in synthesis is the highest form of expression of the individual, it is reflected in society and is capable of presenting itself in an infinite number of different ways, and at the same time each form is unique in its own way. Venice is incomparable for this very reason, to have always been a city in symbiosis with visual languages, a welcoming and stimulating place for all creative people and for all lovers of beauty in every century of history.