The defensive system of the Venice Lagoon: the octagons

Starting from the fourteenth century, the Republic of Venice designed a real defensive system to protect the City and the Lagoon, inaugurated by the construction in front of the island of Poveglia of a small octagonal-shaped fortress intended to house batteries of artillerymen, or rather heavy firearms to protect themselves from sieges by sea: this was the moment when it was thought of carrying out a serious defensive project aimed at strengthening the lagoon defenses, which took shape around the end of the first half of the 1500s with the construction of forts, batteries and subsequently "octagons", the latter located near the island of Lido di Venezia and Pellestrina. The defensive system during the period of the Serenissima Republic included as many as 20 positions, including six Forts, eight Batteries, a Militar Station and five Octagons. The Octagons are therefore small islands of the Venetian Lagoon, so named since the Republic of Venice (following the War of Chioggia which made the fortress of Poveglia famous) decided to build an octagonal fort on each one. It's highly probable that military posts already stood on the five sites, given the historical moment during which the Serenissima had fears regarding the growth of Turkish power. Unfortunately, each octagon is currently abandoned and in ruins. 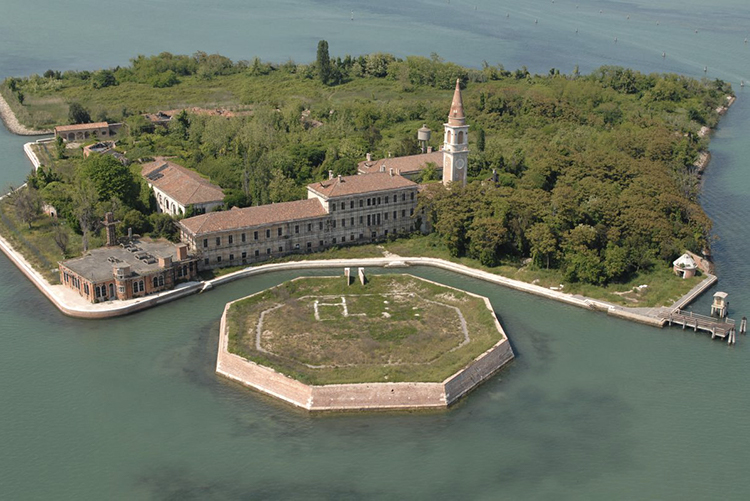 Located in front of the abandoned island of Poveglia, the octagon of the same name was the first (around 1380) to be used in the lagoon defensive system: being the oldest, it was the model to follow for the construction of the other nineteenth-century octagons. With a naturally octagonal plan and made of stone, brick and embankment (accumulation of soil), it served as a barrier for enemy ships during the period of the Republic of Venice. Currently, both the octagon and the island of Poveglia are in a state of neglect in the hands of the state property. 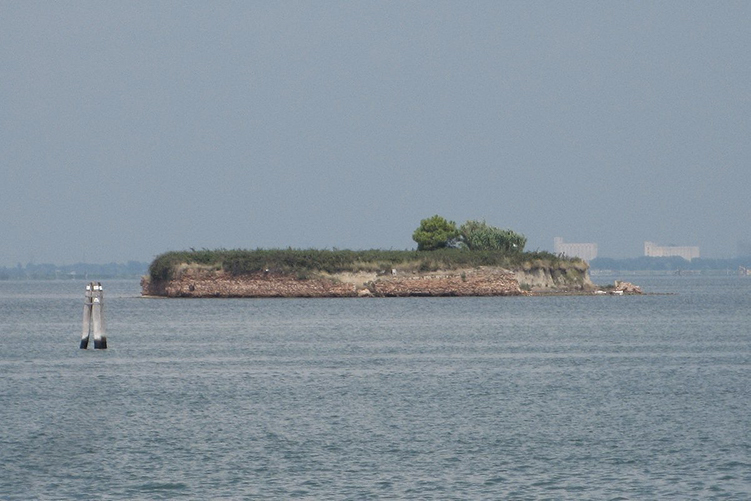 The Abandoned Octagon, originally known as the Campana Octagon, not to be confused with the Campana Island (also called Podo or Forte di Sopra), is located further south of the island of Poveglia, precisely between the locality of Malamocco and the Alberoni, on the island of the Lido of Venice. The construction was carried out exactly like the Poveglia Octagon, and it's in the hands of the state property too. Unlike the other forts, the Abandoned Octagon probably takes its name from the state of decay in which it is located: having no protections on its perimeter, its surface has halved over time due to water erosion. The National Research Council has found remains of pottery, amphorae and the like dating back to the Roman age in its vicinity, a clear sign that at the time the coast extended up to that point. The octagon takes its name from the nearby town of the Alberoni, and is less than two kilometers from the coast. It's currently the best preserved octagon: after the war of Candia (Crete) it was refortified by strengthening the perimeter wall and the walls facing the Alberoni were also reinforced, to increase the defense against boats coming from outside. The island was also used by the military during the Second World War and, after the term, it was bought by private individuals. Currently on the island, still for sale, vegetation prevails.

Also called the "Bastione", the octagon San Pietro is located in front of San Pietro in Volta, a town located on the island of Pellestrina, and is privately owned. Just like the Alberoni octagon, also the San Pietro octagon has undergone changes over time, both in terms of strengthening the perimeter and in the effectiveness of the weapons that occupied it, and it too was used by the military until the Second World War, after which the island was left to itself, prey to decay, currents and erosion. Despite the time that has passed, otherwise the vegetation doesn't prevail and you can still see the remains of a lookout post and an old landing place for boats.

Located in front of the town of Ca' Roman on the island of Pellestrina, the octagon of the same name is owned by the state property. It was probably built on a pre-existing fortification in rocks, rocks and pile dwellings and, consequently, modified by the Austrians as a fortress until the Second World War, a period during which a bunker was built inside its surface. In the center of the island it's still possible to see a guard post and a circular platform in reinforced concrete, which was probably used as the seat of the artillery. This last octagon is also in a state of decay and abandonment, a characteristic that unites all the islands that have had this defensive purpose, but it should be specified that unlike the others, the Ca' Roman octagon still retains internal structures that are unsafe.
Seguici sulla nostra
pagina Facebook