Venice into the italian cinema

Venice, open-air set: cinema, practically since it exists, has often set its stories, its adventures, more or less famous, here in the city. Consider that among the first films of the Lumière brothers there are some famous Venetian views: Landing of a gondola at Santi Giovanni e Paolo, The vaporetti at Rialto and The legendary pigeons of San Marco, are three of the films shown in 1896 to the public gathered for viewing at the Teatro Minerva in San Moisè.

A long time has passed since then and many are the directors who have chosen the lagoon city to set their works.

Since it is impossible to review all of them, we have chosen three Italian films capable of taking us to some of the less known and beaten places in Venice.

Morte a Venezia, the second Venetian masterpiece by Luchino Visconti In 1971 Luchino Visconti, with Morte a Venezia, came back to shoot one of his films in Venice after Senso, in 1954.

This time Visconti translates Thomas Mann's novel of the same name into images, giving shape to the words of the German writer, respecting the author but without compromising his refined and sophisticated directing style.

Hotel Des Bains at the Lido of Venice is the main place where the story is set, both in the novel and the film. This is a beautiful Art Nouveau building from the early 1900s and overlooks the Lungomare Marconi, one of the most exclusive on the island. A luxury hotel that in about 100 years of activity has hosted many important names that have marked the history of the last century.

Disused for years and a little run-down, its restoration should be completed by 2021 and it will bring the Des Bains back to its former glory, although probably in a different guise from its original one.

But let's go back to Luchino Visconti's film: the director's luck is to be able to shoot exactly in the place thought by the author of the novel. This is not always possible for a transposition from book to film, especially if the setting is the result of artistic invention. An imposing set, that of Des Bains, with its luxurious interiors and elegant private beach, which offer a priceless location, without the need to create fictitious sets.

But this corner of the Lido of Venice, not far from the Palazzo del Cinema, is not the only one to appear in the film. The protagonist, the writer Von Aschenbach played by Dirk Bogarde, finds himself walking the calli behind the Grand Theatre La Fenice, desperately looking for Tadzio, the young man he fell in love with.

And it is precisely in the Campiello dei Calegheri, not far from the famous theatre, that the writer discovers that Venice is threatened by a disease. The man will be struck by it and will face his own ordeal alone, until death strikes him while he is on the beach in front of the Hotel Des Bains.

Morte a Venezia is not the only film set on the Venice Lido. In fact, we remember another place on the island, chosen as the set for a masterpiece of cinema: Once Upon a Time in America.

Sergio Leone, the director of the film, decided to shoot a scene from his film in the refined dining room inside the famous Hotel Excelsior. Today this structure hosts many famous people during the days of the Mostra del Cinema, but once upon a time it was the place where the same event took place. In 1932 the oldest film festival in the world was held here. 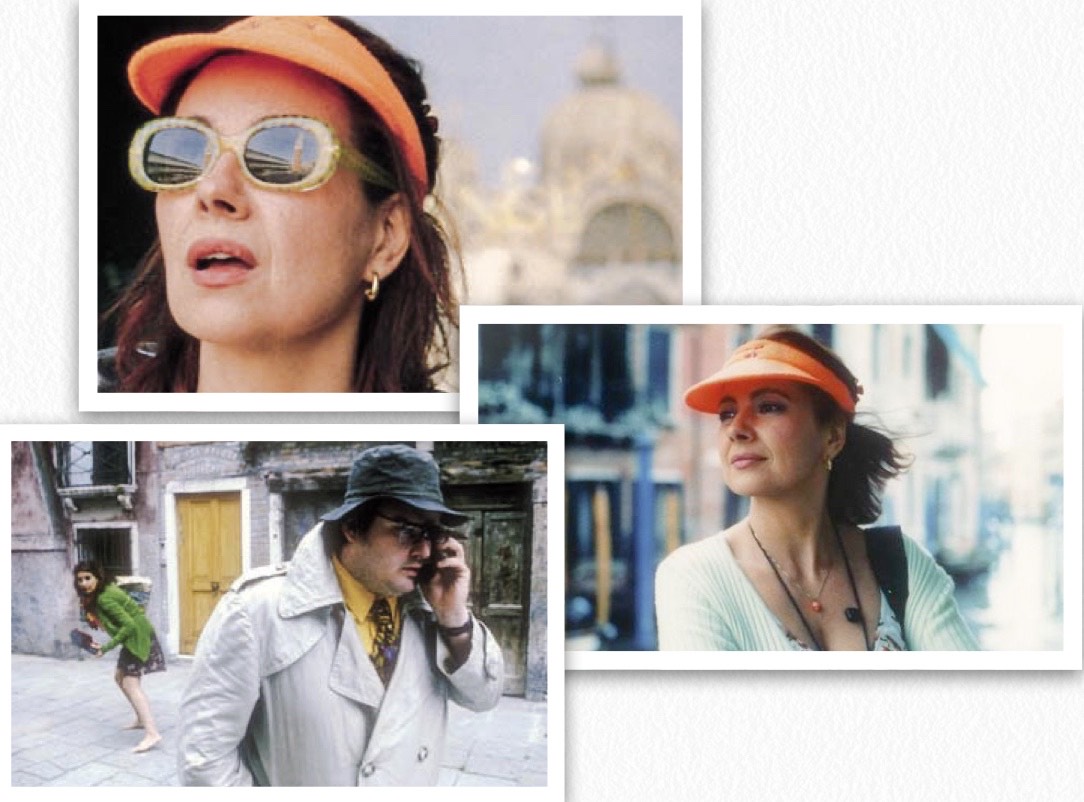 Pane e Tulipani is a bittersweet comedy of 2000, directed by Silvio Soldini. The protagonist is a very good Licia Maglietta and of course Venice, but not the conventional one, but rather an unusual and unexpected city.

In this film, in fact, the real peculiarity is that of being able to see a popular Venice, true and alive. The protagonist, Rosalba, left behind at the motorway service station by her husband and the group she travels with, decides not to take the road home, but to head for the lagoon capital. Here she begins a new life, as well as discovering a city ready to welcome her and make her feel part of its community.

The more conventional Venice does not interest Soldini, the director decides to leave it in the background: this is unequivocal if you think about the choice to show Piazza San Marco only reflected on the lenses of the protagonist's sunglasses.

"In the centre and in the background of this story and of a small film that has become an international success there is a campiello and a wonderful church: a sort of jewel box made of stones and marbles that offers its gently coloured side to a delightful little field". Irene Bignardi could not have used better words in her book "Stories of Cinema in Venice": the reference is to the campiello dei Miracoli and Church of Santa Maria dei Miracoli, a fifteenth century work by Pietro Lombardo, designed by Mauro Codussi. Here stands the florist's shop where Rosalba finds work.

There could not have been a better choice than the Sestiere of Castello to tell an original story that prefers popular Venice to that all too well known. Silvio Soldini has precise ideas: he brings his protagonist to Venice at night, when the city is asleep. He can thus more easily contrast the chaos of the Santa Lucia station, which we see shortly afterwards, with the tranquillity of the calli, carefully chosen, off the beaten track. A real city that contrasts with the touristic one and that at a certain point becomes even more intimate, when history even slips away among the small islands of the lagoon.

If the plot of the film is that of a fairy tale, this cannot be said for Venice which reveals itself in all its most evocative, simple and real beauty. A cheerful and brightly colored city that makes you want to live it and not just visit it.

There are many places in the city seen in the film, like Calle lunga San Barnaba, where the investigator who was hired by Rosalba's husband begins to track down the woman. Fondamenta S.Giustina instead is the place where the man finds a makeshift accommodation, in a barge. Then there is Calle dell'Olio, near the church of San Francesco della Vigna, in Castello, another place in the film: in this calle is the restaurant of Fernando, the man who Rosalba knows by chance and who will become an important presence in her new life. Not a set, but a real restaurant, even if with a different name from Soldini's story. Which makes the Venice represented even more sincere.

Not only Venice. In the film some scenes were also shot in Mestre: a set chosen to be able to fictitiously represent Pescara, the birthplace of the protagonist. In this case it is possible to recognize the houses of Rione Pertini, where the investigator lives, the location of the last minutes of the film, those in which Fernando goes to Rosalba asking her to return to Venice. Dieci inverni is a film directed by Valerio Mieli and presented at the The Venice Internacional Film Festival in 2009.

Michele Riondino and Isabella Ragonese are the protagonists of this film that gives us a story of friendship and love set, again, in the most popular Venice.

The two protagonists meet for the first time on the vaporetto. They are two students recently enrolled in university and because of a misunderstanding they find themselves sharing the same ramshackle little house. This, however, will become the theatre of their story, developed over the course of ten years, but more precisely over ten winters. Interesting the choice to show Venice in the coldest season, the one that usually attracts less tourists, but which is more lived by its inhabitants.

Camilla and Silvestro are two young people who have to face the difficulties of their age, in an era where everything is precarious. This is reflected in what they live, in their decisions and in the mistakes they make and which they repeatedly regret. They approach and distance themselves for ten years, during which Venice not only hosts them but seems to share in their joys and sorrows, like a third friend.

We never see a crowded city, rather the opposite, and this happens at every moment of the film. From the initial scene in a half-empty vaporetto in the Cannaregio canal, in the direction of Basilica of San Pietro a Castello, to the final scene in the little house near the Arsenale, which for ten years has hosted the confidences and quarrels of the two protagonists.

Piazza San Marco is there, but is represented at night, so deserted and illuminated by artificial lights that enhance its elegance and mystery.

All the places in the film can be points of interest of an ideal unconventional tour of the city.

In the Sestiere of Castello, close to the walls of the Arsenale, stands the little house where Camilla and Silvestro live and not far from there we can come across that pearl of 16th century architecture attributed to Jacopo Sansovino, which are the Gaggiandre: today incorporated in the area given in concession by the Navy to the Venice Biennale for its art and architecture exhibitions, once two shipyards that were part of the "Arsenale Novissimo".

Venetian architecture is shown in this film in its simple beauty with the imposing building that houses the Giovanni and Paolo Saints Civil Hospital and Campo San Giacomo dell'Orio in San Stae with the church of the same name, one of the oldest in the city (it is said that the first construction dates back to 555).

A Venice made up of deliberately unrecognizable routes, of marginal but still very fascinating places.

Since the cinema has existed, Venice has always been a highly coveted natural set that has shaped many stories over the years and made millions of people experience unique emotions.

Many films have already been shot and many more will certainly be made in the future among the beauties of a city that, precisely because of its timelessness, is able to serve as a backdrop to stories from every era.